Clemson, South Carolina, USA; Clemson running back Travis Etienne (9) runs the ball in for a touchdown in the first quarter of their game against Virginia at Memorial Stadium. Mandatory Credit: Ken Ruinard-USA TODAY Sports

And just like that, the first round of the 2021 NFL Draft is complete. It was a fun night highlighted as usual by trades and a few surprising selections. That's par for the course with the NFL Draft — nobody knows what is going to happen.

What we do know is that 32 players have new homes in the NFL, which creates massive implications for fantasy football. Let’s dive into the fantasy fallout to wrap a bow on all the action from Thursday night.

No surprise here: Trevor Lawrence and his golden locks are headed to #Duval.

The Clemson product is as NFL-ready as a rookie quarterback can be — he's well deserving of the first pick in dynasty Superflex fantasy formats. Jags head coach Urban Meyer has a track record of leveraging QBs as rushing threats, and Darrell Bevell helped unlock Matthew Stafford’s deep ball over the past two seasons.

With Lawrence’s deep-ball prowess (PFF’s fifth-highest-graded QB on 20-plus yards throws) and “sneaky” rushing upside (PFF’s fourth-highest-graded rusher (84.6) in 2019), he has stud fantasy QB written all over him.

The New York Jets couldn’t be a better fit for Zach Wilson. He's best suited for an offense that leverages an outside-zone scheme — the exact offense we can project Gang Green to run under new Jets offensive coordinator Mike LeFleur. The major concern is Wilson's ability to handle pressure. 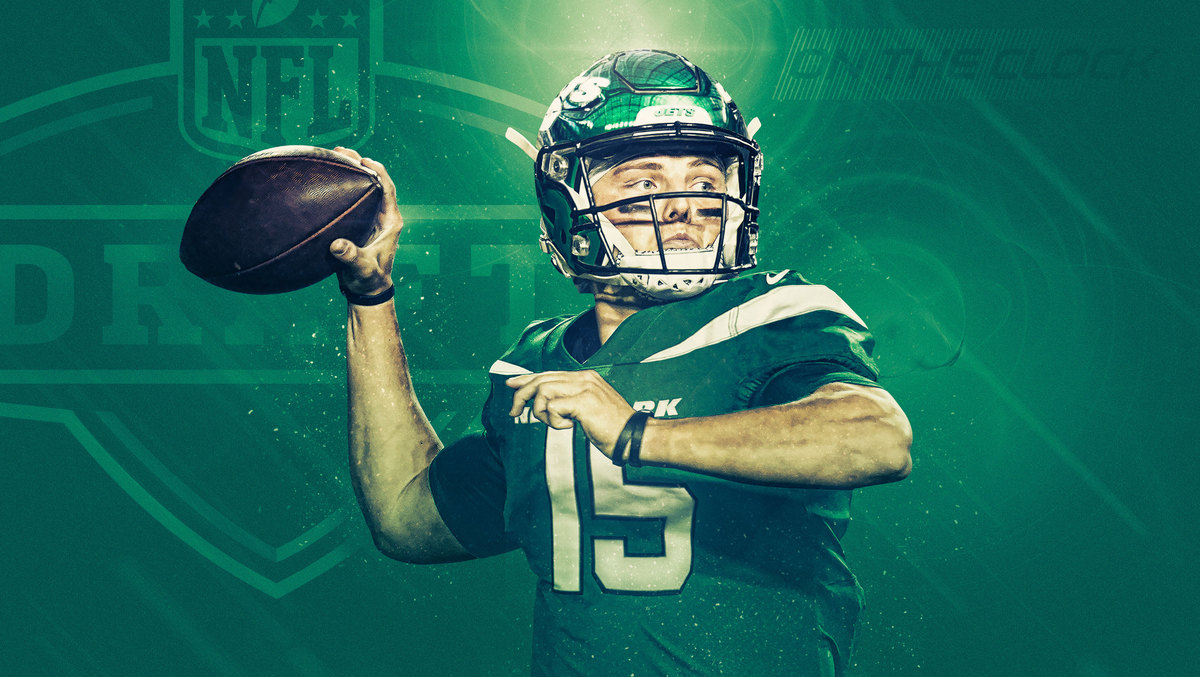 Trey Lance landing in an offense led by Kyle Shanahan is an absolute home run. The team is littered with playmakers — Deebo Samuel, Brandon Aiyuk, George Kittle, Raheem Mostert — which has made life easy for any QB under center. Since 2014, Jimmy Garroppolo (8.2) and Nick Mullens (7.9) rank third and fifth, respectively, in yards per pass attempt.

Putting a mobile quarterback with a big arm into an offense that leverages play-action is going to keep defensive coordinators up at night. Lance's rushing upside is higher than any QB in the class, and that makes him the clear-cut top rookie QB for fantasy football in 2021 (assuming Jimmy G is traded).

The San Francisco 49ers‘ selection of Trey Lance at No. 3 all but guaranteed Kyle Pitts to the Falcons. The dynamic tight end from Florida posted a 96.1 PFF grade in 2019 — the highest mark of the PFF College era.

New head coach Arthur Smith in 2019 ran an offense in Tennessee that ranked second in the NFL in 12 personnel usage (34.3%), so we shouldn’t feel concerned about incumbent tight end Hayden Hurst cannibalizing targets from Pitts. It’s mainly only Calvin Ridley and Julio Jones that Pitts will be competing against, but Jones might be on his way out.

With a clear path to targets in a high-powered offense, Pitts is a borderline top-five fantasy tight end in 2021.

Matt Ryan’s offensive arsenal is even more stacked in Atlanta, so I can’t imagine he will be a value for much longer in best-ball formats.

The idea of reuniting Joe Burrow with his former LSU teammate Ja’Marr Chase was too good to pass up. When the two last played together in 2019, Chase was the best vertical receiver in the nation.

His presence in the Bengals offense will be felt immediately in place of A.J. Green, who caught only one of his 17 targets of 20-plus yards from Burrow last season.

There’s more than enough passing volume to go around between Chase, Tyler Boyd and Tee Higgins. Cincinnati passed at the second-highest rate (68%) under neutral game script conditions when Burrow was under center from Weeks 1-11.

It’s hard to envision Chase not asserting himself as the team’s fantasy WR1.

Jaylen Waddle is the best slot receiver in the class and fits perfectly into the Miami Dolphins offense. The team was forced to play running back convert Lynn Bowden Jr. in the slot last season — Waddle clearly presents a massive upgrade.

The speedy wideout knows how to get open, and Tua Tagovailoa‘s WRs didn't do much of that last season. Tua's receivers created at least one step of separation on just 58% of his pass attempts — fourth-worst in the league.

Waddle is the exact spark plug the Dolphins offense needs to take the next step. He'll be able to make do in fantasy because of his big-play upside. The target share might be limited to start the season, but it wouldn’t shock me to see Waddle rise up the ranks to become the team’s alpha.

No college player since 2018 has more receiving yards than DeVonta Smith with at least one step of separation.

With the ability to play outside and inside, he can be an immediate contributor on an NFL offense. Separation at the college level translates well at the next level.

The Philadelphia Eagles entered the draft with one of the league’s weakest WR corps, so Smith has a legitimate shot to become the No. 1 target in the passing game. Jalen Hurts’ receivers got open at the lowest rate in the league (54%) in 2020.

The Bears traded up from 20 to 11 to select their quarterback of the future, Justin Fields.

The landing spot is not ideal. Allen Robinson II is the only truly reliable weapon in the passing game, the offensive line needs to be improved and the play-calling has been suspect. Fields is great for Robinson’s fantasy value in 2021 — he's easily the best QB ARob has ever played with — but there were better situations to step into.

Luckily, Fields has the rushing upside and hyper-accuracy to deliver fantasy juice anyway. He he should have no problem beating out Andy Dalton to become the Week 1 starter. Fields is still going to be my guy and a priority late-round quarterback target.

Justin Fields aka the fantasy football league-winning late-round QB in 2021 ????

The Patriots did not have to move up to secure their QB of the future. Jones fell into their laps at No. 15, and I would anticipate that he starts for the Patriots sooner rather than later. But as PFF’s Ian Hartitz noted during PFF’s Live Draft Show, the lack of rushing upside is going to limit his fantasy ceiling. Jones will have to become one of the top pocket passers in the NFL to be a force in fantasy football.

One of Jones' major strengths is his accuracy as an underneath passer, so he's a good sign for team's tight end duo of Hunter Henry and Jonnu Smith. Jones is better for all the pass-catchers in the Patriots’ offense because he is going to throw more than Cam Newton and will be more accurate.

Patriots running back Damien Harris should have new life without a QB stealing all the goal-line TDs.

This was possibly the worst-case scenario for Kadarius Toney’s fantasy value. His profile was already littered with red flags and now he is way down in the target pecking order on Big Blue. Between Kenny Golladay, Sterling Shepard and Evan Engram, Toney will be fighting an uphill battle for fantasy relevance in 2021.

Daniel Jones should benefit from Toney’s playmaking upside, but there’s not much to like outside of that.

Najee Harris is my No. 1 ranked running back and overall rookie in this class — he has fantasy bell cow written all over him. The Alabama product is going to be fed with touches in the Steelers offense, putting him firmly in high-end RB2 fantasy territory. He’s easily a top-15 fantasy RB in 2021.

I hate to be the guy who takes a victory lap, but I was all over the Jaguars drafting a running back despite what the James Robinson truthers said. Robinson has been a dynasty sell for me since the start of March, and now his value is nuked with first-rounder Travis Etienne entering the fold.

Etienne should be viewed as the clear favorite to lead the team in RB snaps — first-round RBs don’t sit. The backfield is shaping up to be a committee with Etienne likely benefitting the most from receptions and goal-line work. Etienne falls to low-end RB2 territory, whereas Robinson’s ranking plummets from solid RB2 to outside the top-30.

The “Get Lamar Jackson a WR1” movement finally succeeds, as the Baltimore Ravens add future alpha WR Rashod Bateman. Bateman’s 35% career dominator rating ranks No. 1 in the class among receivers from the FBS. The former Golden Gopher led the nation in yards per route run (3.6) and was PFF’s eighth-highest-graded receiver (89.2) from an out-wide alignment during his epic sophomore season.

Bateman gives L-Jax a legitimate “X” receiver, which is exciting for fantasy. But the rookie’s overall upside probably won’t surpass anything outside WR2 territory based on the limited passing volume in the Ravens offense. Bateman's presence in the offense lowers the ceilings of both Marquise Brown and Mark Andrews.

The consensus No. 1 tackle in the draft ensures that the Lions offense will be slightly better when they inevitably find themselves trailing in garbage time.

Drafting a tackle was the best-case scenario for the Los Angeles Chargers. Herbert’s league-leading passer rating while under pressure (99.4) isn’t something to bank on year over year. Adding an elite OL prospect to a unit that ranked dead last in PFF run-blocking last season is also great for Austin Ekeler.

Trading up for an interior OL is an interesting move, but the Jets need to protect their new franchise quarterback.

The Las Vegas Raiders’ backfield is a mess, but bolstering the OL offers hope that we can see Josh Jacobs emerge as a fantasy RB2.

A pure left tackle, Christian Darrisaw helps shore up an offensive line that lost Riley Reiff in the offseason — great for all fantasy football parties involved.