PFF.com is going to be stuffed to the gills with content on all of your favorite draft prospects, as PFF draft guru Mike Renner has been grinding tape all throughout the college football season. His work has already produced the second version of PFF’s Draft Guide, available to grab with a PFF Edge or Elite subscription.

The first player I looked at was the Heisman Trophy winner, Alabama WR Devonta Smith. Next up was LSU’s Ja’Marr Chase, followed by Jaylen Waddle, the fourth receiver from Alabama likely to be taken in the first round over the past two draft classes.

For this installment, I'll look at Florida's Kyle Pitts, one of the most intriguing players in the draft. Pitts absolutely exploded in 2020 with a 96.2 PFF grade, the highest of any receiver in the draft. He is technically a tight end but should probably be looked at in sequence with these other elite receivers because of what he can do in the passing game.

I’m going to start with his targets from 2020 and then dive into his previous season to see why his grade wasn’t quite as good. What got better for that incredible 2020 season beyond his quarterback?

Here are my thoughts in chronological order as I sifted through Pitts' tape. Each takeaway is labeled with +/- (or double plus or minus for significantly good or bad things) and a ~ for neutral. 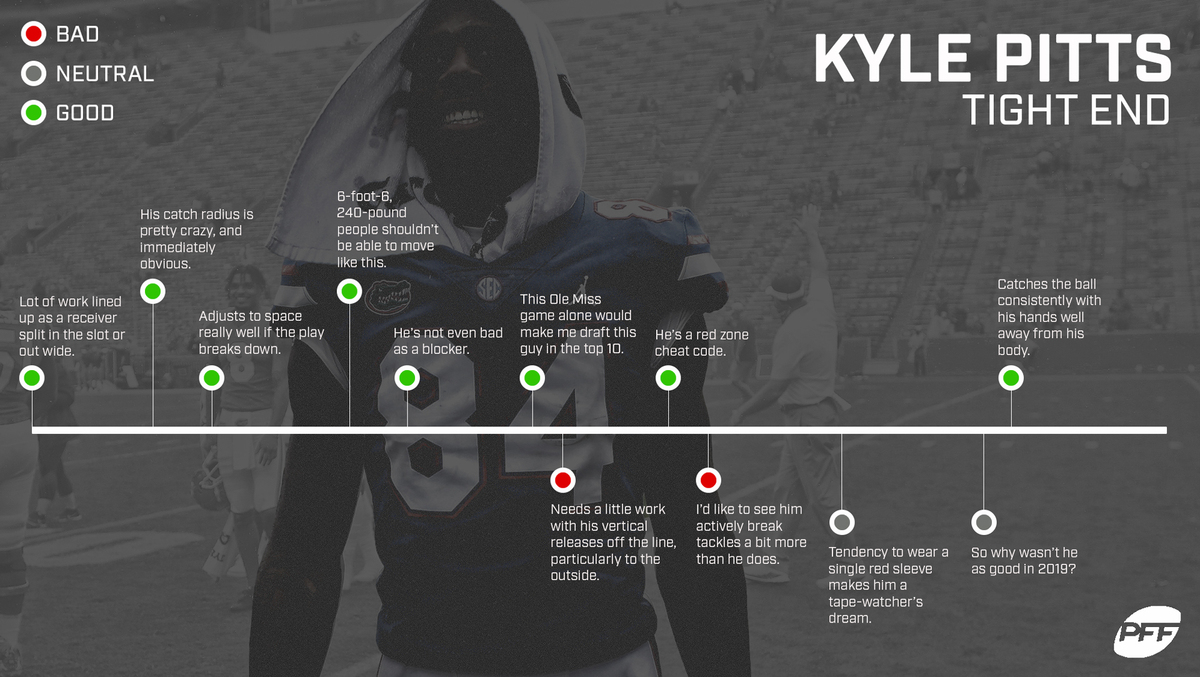 Some 36% of Pitts' snaps in 2020 were lined up outside of an in-line position. That’s encouraging in this world of pass-happy offenses and shows that he can win from real wide receiver alignments — not just as a tight end.

++ His catch radius is pretty crazy, and immediately obvious

I don’t even mean just with his size and wingspan, but Pitts possesses effortless body control to get his hands on passes that are very awkward catches for other receivers.

“Functional” catch radius might be a better way of phrasing this. Some players have the tools for a huge catch radius and may make a spectacular play with it every now and then, but Pitts can make adjustments to inaccurate ball location and still secure balls in a way you don’t often see — and certainly not from players as big as he is.

There’s an impressive fluidity of motion to his movements and adjustments. I don’t know that I’ve ever seen somebody able to automatically adjust and haul in passes that are slightly off-target without any fuss as well as Pitts does.

+ Adjusts to space really well if the play breaks down

Pitts is very good at making sudden and decisive moves into open space if he sees his quarterback in trouble, generating a huge degree of separation at the break and then outrunning the defender into space for as long as he needs to become a viable target on the scramble drill.

This is one of the things that Travis Kelce is so good at for Kansas City, and it just adds a whole extra dimension of threat for a player who is already able to get open on the called play.

There’s a play against Ole Miss where Pitts just goes Tecmo Bowl on the whole defense, beating one poor guy at least two different times on the play and then outrunning the defense into the end zone. His movement skills are simply stellar.

+ Pitts isn't even bad as a blocker

I’m not sure anybody will care about this, given what Pitts accomplished as a receiver, but I don’t think he’s a complete liability as a blocker, particularly in pass protection. You can see several plays where he gets himself in good position and then releases his man to leak out into a pass pattern.

The fact that he takes the time to execute the fake well is impressive, and his PFF pass-blocking grades have been consistently above average every season of his college career.

Seriously, this game produced a 95.7 PFF grade for Pitts. He caught eight of the nine passes thrown his way for 170 yards and four touchdowns while absolutely tearing the Rebels’ secondary asunder.

This game showed an entire skill set for an elite game-changer at the next level. If I was trying to make a compelling case for Pitts to be drafted higher than people expect him to go, I would just show this tape on a loop.

– Needs a little work with his vertical releases off the line

Pitts' main plan is to just try and surprise the defender with his speed after a little set-up step, but he needs more deception or work with his hands to clear the contact and be able to stack players that he genuinely can outrun if he gets the chance. This is a small thing, but it would immediately catapult him into a realm of completely uncoverable.

Florida split Pitts out wide down by the goal line, and you can’t cover both the slant and the fade — you need to cheat to prevent him from winning on either of them. If you gave him an option route based on the leverage of the guy trying to cover him one-on-one, you’ve got an instant touchdown basically every time.

Pitts is big, fast and can move well, so why did he break only 10 tackles in his college career on 100 catches? It’s not a terrible rate, but given how freaky he is athleticially compared to some of the defenders trying to get him down, I would have expected a little more in this area.

I’d just like to extend a personal thank you to Pitts for that. Half your life can be spent pre-snap looking for the player you’re trying to evaluate, even when you’ve reduced the playlist to significant plays. The ability to immediately zero in on Pitts because of that differentiator is a game-changer.

+ Catches the ball with his hands well away from his body

Pitts buys himself room on plays against really tight coverage by boxing out the defender and then extending his long arms well out from his body before making the catch beyond where the defender can do anything about it.

It’s actually a perfect example of why that kind of small detail matters. There are several catches on his tape that other players aren’t making because they don’t extend as far as he does.

Despite more targets in 2019, Pitts had seven fewer touchdowns, averaged 5.9 fewer yards per catch, racked up 1.8 fewer yards after the catch and didn’t have a reception longer than 35 yards. When you put on the tape, there isn’t a great answer, at least from Pitts. The biggest difference was the play of his quarterback, Kyle Trask. Trask’s overall PFF grade was more than 20 points worse that year, and he just wasn’t giving Pitts as many opportunities to make plays. When he did, Pitts dominated.

This is Kyle Pitts 1 on 1 in space by the goal line.

This is a cheat code.

A 2-way go here it's just game over for the defender. Whatever you overplay you lose.

Take away the slant? Easy fade. Cheat to the fade? Slant is easy money. pic.twitter.com/Wy0wUGgGPm

Kyle Pitts is special, and he may be the most talented playmaker in the entire draft. He is nominally a tight end but has shown the ability to win outside and in the slot as a true wide receiver. And that’s not to say he needs to be able to do that because he can’t block.  His blocking in-line is more than adequate, and that’s something that typically develops at the NFL level when more is asked of players.

Pitts is one little step of development on his outside vertical release away from being a completely uncoverable weapon in the NFL — a player with a cheat code of a two-way go to either attack the outside vertically or break inside and run after the catch into space. He is already the living embodiment of this in the red zone, where the dual threat of what he can attack causes no end of trouble for opposing defenders.

Pitts may have as clean a tape as any prospect in this draft, and the biggest question becomes how dependent he is on a creative offensive mind to maximize his impact or how valuable he is if he remains just a tight end at the next level. In 2020, Travis Kelce was more valuable than any other tight end and all but three wideouts in terms of PFF WAR, proving that lining up as just a conventional tight end can be incredibly effective and valuable at the NFL level.

Kelce's team also uses him creatively, matching him up against linebackers, safeties and cornerbacks and relying on his mismatch traits. Kelce provides a good blueprint for what Pitts could do at the next level, but the Florida product may even surpass Kelce in terms of physical traits and versatility. He could be one of the first players with true wide receiver/tight end crossover ability in a way that isn’t just a position switch because of a deficiency.

Pitts is a phenomenal prospect, and he may be the best receiver in the draft, regardless of position.