Elite play at the tackle position is highly coveted in today's pass-happy NFL, and rightfully so. Weaknesses at either left or right tackle can keep capable starting quarterbacks from playing their best and limit offenses overall. Having one of the 10 guys listed below starting in the trenches puts the quarterback and his offense in a much better position to succeed. 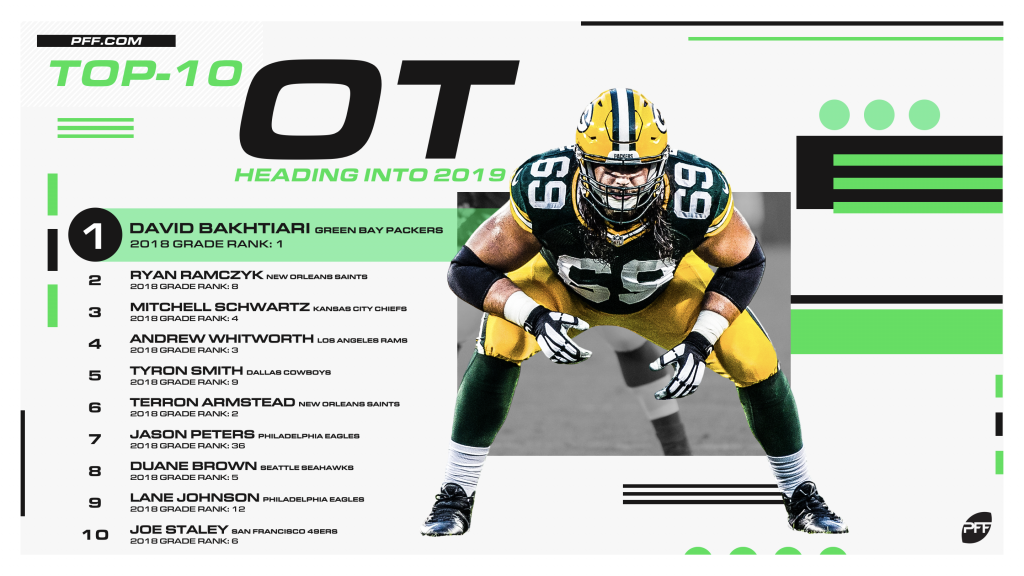 Turning 35 years old in late August, Staley will retire as one of the best tackles to ever play in the NFL. He’s been the epitome of consistency for the offensive tackle position, earning 81.0-plus overall grades in each of the past seven seasons. He’s also avoided significant injury over the seven-year stretch, playing 840 or more offensive snaps in each season. All signs point to Staley and second-year offensive tackle Mike McGlinchey being one of the NFL’s top tackle duos for however many more years Staley takes the field.

The addition of Brown at left tackle made the world of difference for a Seattle offensive line that finished the 2018 season ranked 17th in pass-blocking efficiency after finishing 29th in 2017. Brown allowed just 21 quarterback pressures from his 501 pass-blocking snaps on the year and surrendered just six combined sacks and hits.

Terron Armstead has been in the conversation as one of the NFL’s most balanced offensive lineman in the NFL ever since his breakout season in 2015 where he earned a 92.6 overall grade. In 2018, the seventh-year left tackle was one of only two offensive tackles to finish top 10 in both pass-blocking and run-blocking grades, resulting in an overall grade of 87.7. For his elite play, he earned the top spot on PFF’s top 25 offensive linemen of the 2018 NFL season.

Smith didn’t post a banner year in 2018 compared to his previous career-highs, but his 80.1 overall grade and 86.6 pass-blocking grade were still among the best tackles in the NFL. He allowed just 18 total pressures across his 596 pass-blocking snaps on the year, which marked a career-low for the eight-year veteran.

Whitworth’s best may be behind him as he enters the 2019 season at 37 years old, but the longtime stalwart – even in decline – is still one of the best offensive tackles in the game. He earned an impressive 86.1 overall grade while also logging 88.5 and 78.4 pass-blocking and run-blocking grades, respectively, with the Rams in 2018.

Among the 64 offensive tackles with 3,000-plus offensive snaps played in the last seven years, Whitworth ranks third in overall grade (92.9) behind Joe Thomas (94.4) and Joe Staley (94.2). Whitworth’s 93.6 pass-blocking grade ranks second on the list, as well.

Schwartz turned in career-highs in overall grade (83.6) and pass-block grade (85.6) this past season. He also finished the year ranked tied for fifth in pass-blocking efficiency (97.9) and pressure percentage allowed (3.6%). The epitome of consistency, Schwartz has played 1,000 or more offensive snaps in every year of his seven-year NFL career and has yet to earn an overall grade below 72.6 or a pass-blocking grade below 73.8.

New Orleans’ brass has seemingly hit a home run with 2017 first-round pick Ryan Ramczyk, as the former Wisconsin product has been nothing but outstanding in his two years in the NFL. Ramczyk has earned 81.0-plus overall grades in each of his first two seasons in the NFL, all while playing at least 1,000 offensive snaps each year. He’s also earned 76.0-plus pass-blocking grades and 77.0-plus run-blocking grades in each of the two seasons.

Also driving our confidence in Ramczyk being the 45th-best player in the NFL right now is just how successful he was at the collegiate level. Before earning high marks with the Saints, Ramczyk earned a 92.3 overall grade, an 84.7 pass-block grade and a 91.4 run-block grade.

Bakhtiari received PFF’s 2018 Pass Blocker of the Year Award for his efforts this past season. From PFF’s Mike Renner:

“Bakhtiari is currently the gold standard for pass protection in the NFL. There are better run blockers and more impressive athletes playing tackle today, but no one is stingier in pass protection than the Packers left tackle.”