With Rob Gronkowski now retired, Kansas City Chiefs' Travis Kelce takes sole control of the top tight end spot in the NFL. San Francisco 49ers' George Kittle and Philadelphia Eagles' Zach Ertz are close behind, but the separation between Ertz at No. 3 and Tampa Bay Buccaneers' OJ Howard at No. 4 is significant. 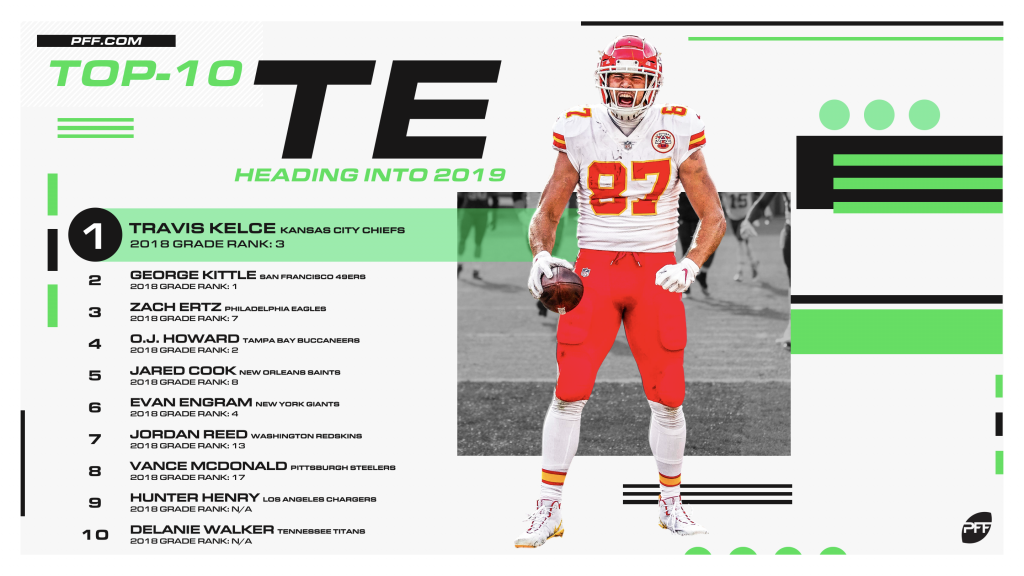 Saying that Walker’s return will boost the Titans offense is an understatement. Walker’s two-year stats (2016-17) have him with a combined overall grade of 79.6, which is the eighth-highest mark among tight ends in that span. During this time, he finished with an 81.3 receiving grade, which was the eighth-highest mark among tight ends, as well. In addition to this, he averaged 1.85 yards per route run, which ranked fourth, and he hauled in 10 touchdown receptions. The Pro-Bowler has also proved to be a hard man to bring down, as he forced 15 missed tackles (fourth-most among tight ends) and totaled 510 yards after the catch (10th). Walker’s impressive numbers don’t stop there, as he hauled in 92.6% of catchable passes, which ranked eighth among tight ends during the two-year span.

Injuries have limited Henry to just 1,185 offensive snaps in his three-year career, but his production across the small sample size is spectacular. His 88.5 career overall grade ranks third among the 55 tight ends with at least 1,000 offensive snaps played since 2016. He's also earned a 90.0 receiving grade in his career that also ranks third among the same set of qualifiers.

McDonald has very quietly earned 68.0-plus receiving grades in each of the past three seasons. His 74.1 two-year overall grade ranks tied for 10th among qualifying NFL tight ends, and he's logged 72.0-plus run-blocking grades in 2017 and 2018.

The 2015 season, Reed’s third in the NFL, is still the most we’ve seen of the tight end over a year, and it still serves as a glowing reminder of what he’s capable of at full health. Playing a career-high 764 snaps in a career-high 15 games, Reed dominated the 2015 season as a receiver to the tune of 96 catches for 1,072 yards and 12 scores. That year, he led the league’s tight ends in yards per route run (2.45), and his 131.7 passer rating when targeted was good for fourth. Only Travis Kelce and Rob Gronkowski racked up more yards after the catch than Reed’s 486 yards that season, while his 55 first down receptions and his 16 missed tackles forced both paced the league.

Washington needs the Reed it had back in 2015, the same player who flashed superstar levels of play. Just like the Kelces and the Kittles in the NFL, Reed, when healthy, is adept at making people miss and racking up the yards after the catch, and at his best, he can turn short passes into significant chunks — something that this offense badly needs.

Engram caught only 35-of-54 targets (68.0%) for 338 yards and averaged just  0.84 yards per route run through . the first nine weeks of the 2018 season. The second half of the season was a different story, though, and it’s that performance that should give Giants fans hope for the future. From Weeks 10 to 17, Engram caught 28 of his 38 targets (73.7%) for 432 yards, averaging of 3.04 yards per route run in the process – the second-best rate among tight ends in that span. His second-half performance has a lot to do with his work after the catch, as he averaged a colossal 10.0 yards after the catch per reception in the season’s last eight weeks, compared to only 6.5 yards after the catch per reception over the first nine.

Even though he’s set to turn 32 years old next month, Cook is coming off a career-best year in Oakland. After seeing the most targets among Raiders’ pass catchers with 99, Cook hauled in 68 passes and set career-highs in receiving yards (896), receiving touchdowns (6), yards after the catch (361), first down receptions (46), missed tackles forced (7), plays of 15-plus yards (22) and receiving grade (81.5). Cook’s average of 1.83 yards per route run was good for eighth among tight ends, and not only beat Benjamin Watson‘s mark of 1.54, but it also beat notable players at the position, players like Rob Gronkowski (1.73), Jordan Reed (1.64) and Kyle Rudolph (1.19).

Howard bounced back from an underwhelming rookie campaign and showed us exactly what he was capable of in Year 2. He ended the 2018 season as our third-highest graded tight end, and his average of 2.26 yards per route run ranked third among the 64 tight ends with at least 100 snaps in route.

Ertz finished his record-setting 2018 season with the most ever receptions by a tight end, with 116 on 154 total targets. In his sixth season, he finished as the sixth-highest graded player at the position with an overall grade of 76.0 and a 79.5 receiving grade.