NFL scores and recaps for every Week 12 game

PFF broke down the numbers immediately after every NFL Week 12 game, including scores, rookie standouts, offensive line performances and more. 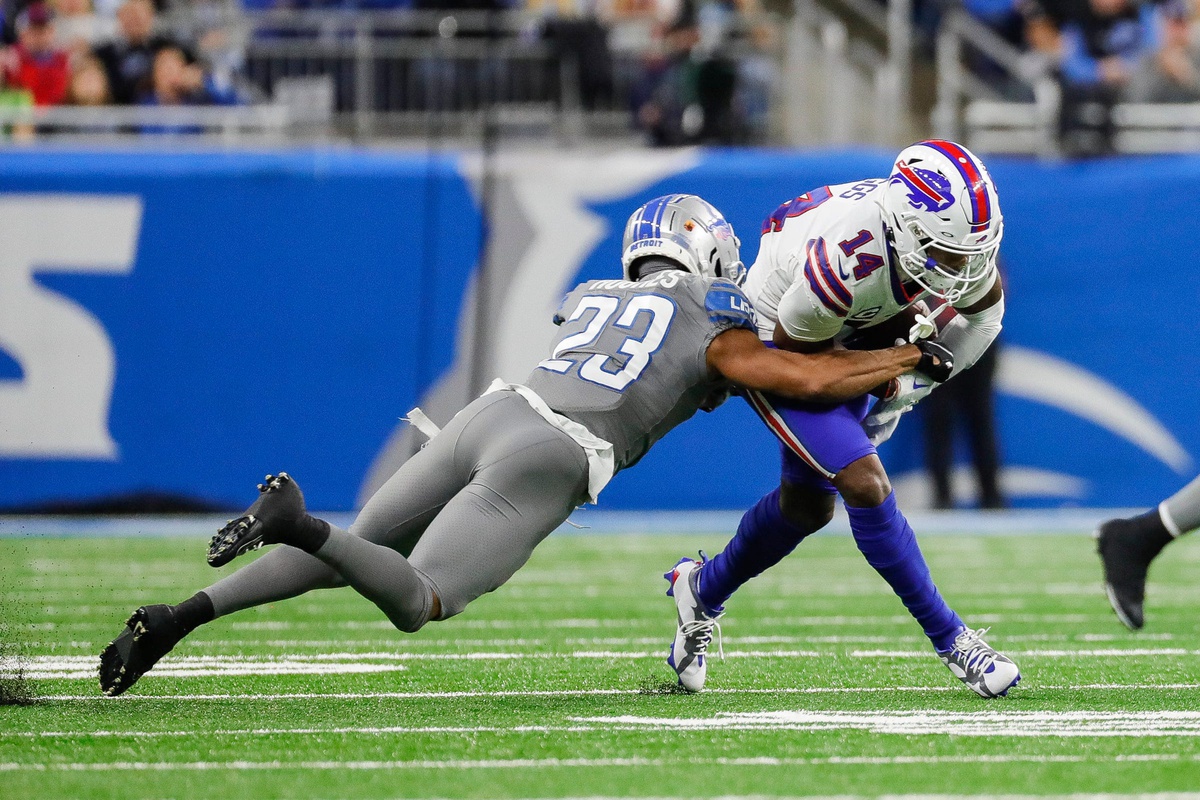 Offensive spotlight: Lions wide receiver Amon-Ra St. Brown is on track to record a game-high PFF grade after hauling in nine of his 10 targets for 122 yards — 44 after contact — and seven first downs, with a touchdown to boot.

Defensive spotlight: Although the pass-rush game is usually where defensive linemen truly make their mark, Ed Oliver proved to be a dominant force against the run. He tallied four stops and a forced fumble on 20 run-defense snaps.

Offensive spotlight: Cowboys wideout CeeDee Lamb put on his best show for an on-looking Odell Beckham Jr., racking up 106 yards on six catches. He brought in three of his six contested targets on the day, including an impressive one-handed grab.

Defensive spotlight: Demarcus Lawrence and Micah Parsons combined for 11 pressures on first review. Parsons came away with two sacks and the better pass-rush win rate, but Lawrence was responsible for seven of those pressures.

Offensive spotlight: Minnesota's Justin Jefferson cemented his case as one of the league's very best wide receivers, snaring all nine of his catchable targets for 139 yards and a score. He caught two of his contested targets, averaged an incredible 3.76 yards per route run and generated a 149.1 passer rating.

Defensive spotlight: Veteran edge rusher Za'Darius Smith graded well against the run and as a pass-rusher against the Patriots. He produced five QB hurries from 36 pass-rush snaps and two defensive stops on 10 run-defense snaps.

Offensive spotlight: The Dolphins' run game was nonexistent against one of the worst run defenses in the NFL, but it still didn’t matter with how much of a burner Tua Tagovailoa continues to be on. He had already racked up 278 passing yards at the half. It was the most we’ve seen him spread the ball out this year, as he completed passes to nine different receivers. Even when the offensive line didn’t have its best day, Tua still showed out.

Defensive spotlight: Second-year defensive end Jaelan Phillips had one of the best games of his young career. He notched a sack and three other pressures on only 23 pass-rushing snaps. Phillips wasn’t the only one along the defensive line having themselves a day. Christian Wilkins, Bradley Chubb and Melvin Ingram III all added three pressures, as well.

Offensive spotlight: Someone needed to step up in Ja’Marr Chase’s place over the past month, and that man has undoubtedly been Tee Higgins. After going for 148 yards last week, Higgins went for 114 on seven catches, including a score, this week. He made plays when it mattered most, catching all three of his contested targets.

Defensive spotlight: Mike Hilton kept the slot on lockdown Sunday. He led all players in the game with five defensive stops, as he was all over the field. Listed at 183 pounds, Hilton was giving up over 60 pounds to Titans running back Derrick Henry yet still made four stops in the run game.

Offensive spotlight: On first review, Panthers wide receiver D.J. Moore was the game’s highest-graded player after hauling in four catches on six targets for 103 yards with a touchdown from QB Sam Darnold. It was just Moore’s second 100-yard performance of the season.

Moor has been at his best over the last two years with Darnold at QB. In Sunday’s game, he picked up first downs on all four receptions and posted three contested catches and three explosive plays.

Defensive spotlight: Panthers edge defender Brian Burns now has a career-high 10 sacks this season after registering two sacks, one QB hit and three hurries in Sunday’s win over the Broncos.

Offensive spotlight: White put up some big numbers without playing especially well. He took what the defense gave him, highlighting just how much of that play was missing from this offense with Zach Wilson at quarterback. White cleared 300 passing yards at 11.3 yards per attempt today.

Defensive spotlight: Receivers fought back in this game a little, with both D.J. Reed Jr. and Sauce Gardner losing out at the catch point for a big play to Chicago receivers. Overall, they still held up well and allowed a combined four catches for 49 yards and a touchdown.

Offensive spotlight: The Commanders' passing attack produced a couple of big plays, but it was the rushing game that accounted for 176 yards — more than 50% of their total offensive output. Rookie Brian Robinson Jr. was the workhorse. He earned the highest grade for Washington's offense on first review.

Defensive spotlight: Rookie Arnold Ebiketie was the only Falcons defender to record multiple pressures, with the team generating just five in total. One of the worst pass rushes in the league just got worse.

Offensive spotlight: Bucs wide receiver Chris Godwin was electric today, catching all 12 of his catchable targets for 110 yards, one touchdown and five more first downs. He hauled in both of his contested targets and totaled 51 yards after the catch.

Defensive spotlight: Interior defender Vita Vea continued his strong second half of the campaign, recording six hurries from 25 pass-rush naps and two defensive stops on 19 snaps against the run.

Offensive spotlight: Behind an 83.3% adjusted completion percentage and a season-high four big-time throws, Trevor Lawrence led the Jaguars to a come-from-behind win. He did make three turnover-worthy plays on first review, but it was an impressive performance down the stretch for the former No. 1 overall pick.

Defensive spotlight: Marcus Peters became only the second defensive back this season to allow three touchdowns in coverage. Overall, he surrendered six catches on seven targets for 55 yards and the aforementioned scores. 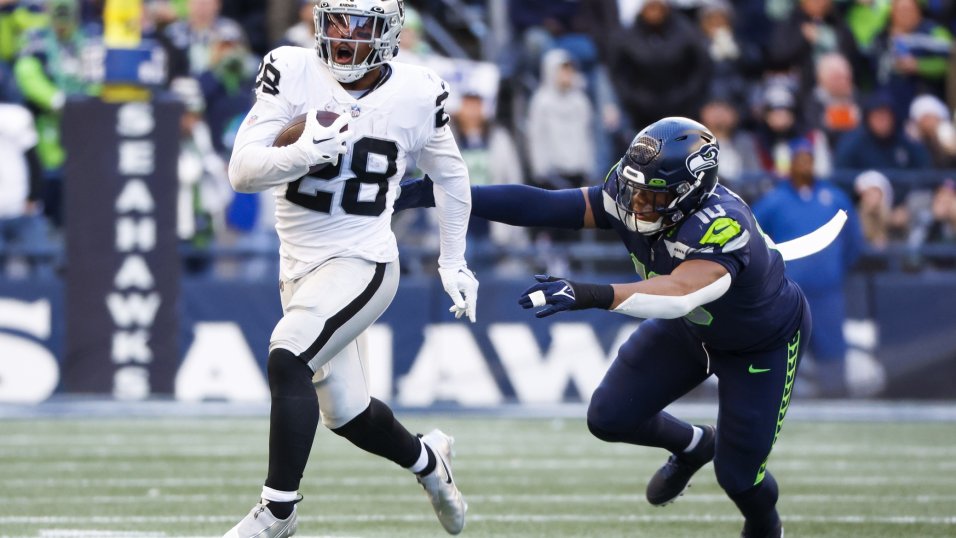 Offensive spotlight: Running back Josh Jacobs was a terror against the Seahawks defense and put together one of the best performances of the season. He ran for a season-high 229 yards — with 162 yards after contact — nine rushing first downs, four explosive runs of 10 or more yards and two rushing scores, including his game-winning 86-yard touchdown run.

Offensive spotlight: Murray's return may have drawn the spotlight, but Herbert was the better quarterback on Sunday. The third-year signal-caller finished with an 81.3 grade on first review, completing 75% of his passes for 274 yards and three touchdowns, including the game-winner.

Defensive spotlight: Derwin James caused two turnovers in the win — one interception and one forced fumble that Sebastian Joseph-Day recovered. James allowed only a 58.3 passer rating when targeted on the day. Offensive spotlight: Few tackles in NFL history to stack up with Trent Williams when he's at his best — and Williams was near his best tonight. The veteran tackle earned an 85.1 pass-blocking grade and a 91.0 run-blocking grade on first review.

Defensive spotlight: Niners linebacker Fred Warner made plays in all facets of the game on Sunday afternoon. Targeted three times, he allowed one catch for 20 yards, but he also forced an incompletion on the other two targets. He added three stops against the run and a QB hit as a pass-rusher to cap off a solid all-around display. 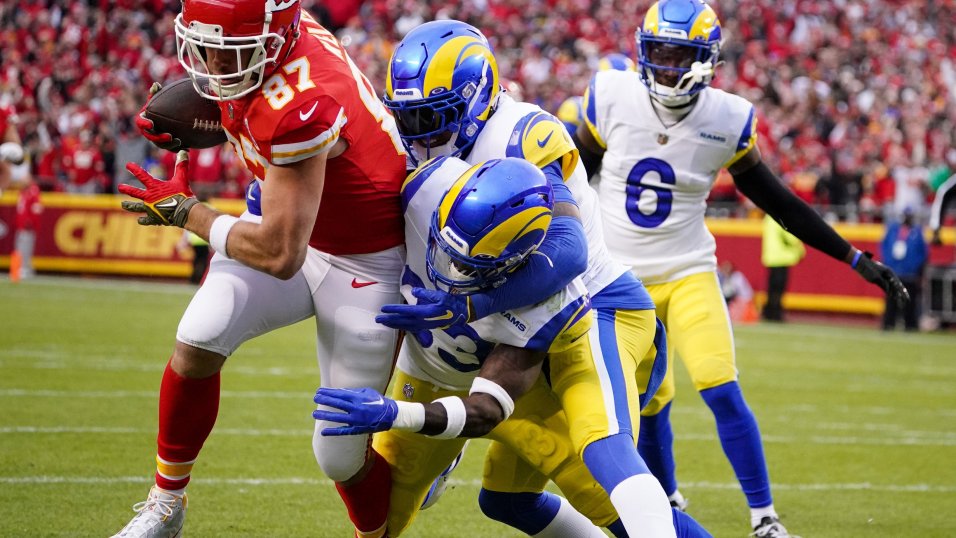 Offensive spotlight: He wasn’t his regular virtuoso, but Patrick Mahomes was again effective against a quality NFL defense. The Chiefs QB made three big-time throws against one turnover-worthy play while finishing with a 74.8 adjusted completion percentage.

Defensive spotlight: It was another effective day of coverage by Chiefs’ third-year cornerback L'Jarius Sneed. The former Louisiana Tech Bulldog allowed just three catches for nine total yards while intercepting the other target to finish with a 92.4 coverage grade on first review. Offensive spotlight: Packers quarterback Aaron Rodgers exited in the second half with an oblique injury, thrusting Jordan Love onto the field. And while Love played well enough and did everything right, Jalen Hurts and Co. were one step ahead for most of the night.

The Eagles put on an unforgettable display on the ground. As a whole, Philly averaged 7.4 yards per carry, produced 11 explosive runs of 10 or more yards and racked up 363 rush yards overall. All three of those metrics are season highs for Nick Sirianni's men.

A lot went into that production, but no one was more impactful than Hurts. The quarterback picked up 10 rushing first downs on 16 attempts (11 designed, five scrambles). And Hurts is just the second quarterback with double-digit first downs rushing in a single game this year (Justin Fields had 12 in Week 9 vs. Miami).