Not much has gone right for the San Francisco 49ers this year. They lost franchise quarterback Jimmy Garoppolo early in the season, and they have had to overcome a constantly-rotating carousel of injured skill position players ever since. Still, there have been a few bright spots for a team that has the potential to be one of the most talented units in the NFL, and no player has shone brighter than second-year tight end George Kittle.

The play from the second-year man out of Iowa has been a revelation this year and he has provided the 49ers with the same kind of elite-caliber productiveness that lies in some of the greatest players at the position. Through 14 weeks, Kittle has caught 69-of-74 passes for 1103 receiving yards, which are the league's second-most receiving yards among tight ends and the tenth-most among all skill position players in the NFL. Included in his 69 receptions are four touchdown grabs, and all told, the sophomore tight end has generated a passer rating of 115.1 and averaged 2.82 yards per route run, which respectively rank second and first among qualifying players at the position. 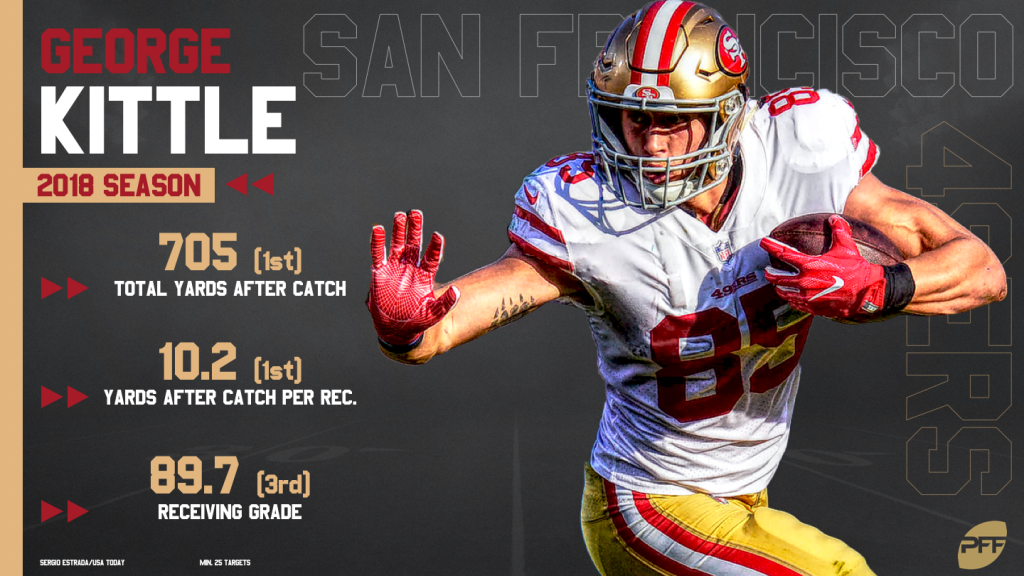 Kittle has been so good, that one has to wonder where the 49ers offense would be without him. He's been targetted on a whopping 24.6% of his routes on the year, which is the third-highest rate among tight ends just behind Zach Ertz (27.3%) and Eric Ebron (24.7%), and by far the highest rate among his teammates. Through 14 weeks, he also leads his teammates in early down-targets (74), late-down targets (22), targets from pressured dropbacks (30), targets from a clean pocket (66), targets against the blitz (25) and red-zone targets (12). 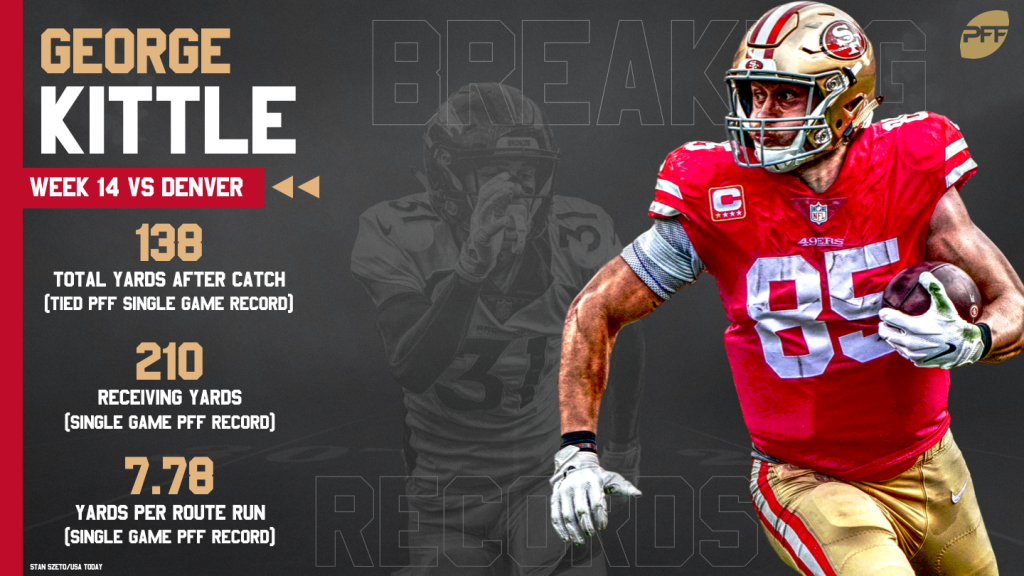 No single-game performance summed up Kittle's explosive potential better than his Week 14 outing against the Denver, where he single-handedly brought the Broncos to their knees in just 30 minutes of football.

Kittle ended his Week 14 game just four yards shy of Shannon Sharpe's NFL single-game record for a tight end, and it could have been even more if not for the fact that he wasn't targeted at all in the second half of the game. In an exceptional performance, that earned a 92.1 overall grade and a spot on PFF's Team Of The week, Kittle hauled in seven receptions for 210 receiving yards, which broke the single-game PFF record that was previously held by Dallas Clark's 183-yard performance in Week 2 of the 2009 season. Kittle's 138 yards after the catch tied a single-game record that was once held exclusively by Travis Kelce and his average of 7.78 yards per route run is the best single-game mark that we've ever seen from a tight end with at least 20 routes run in a game. 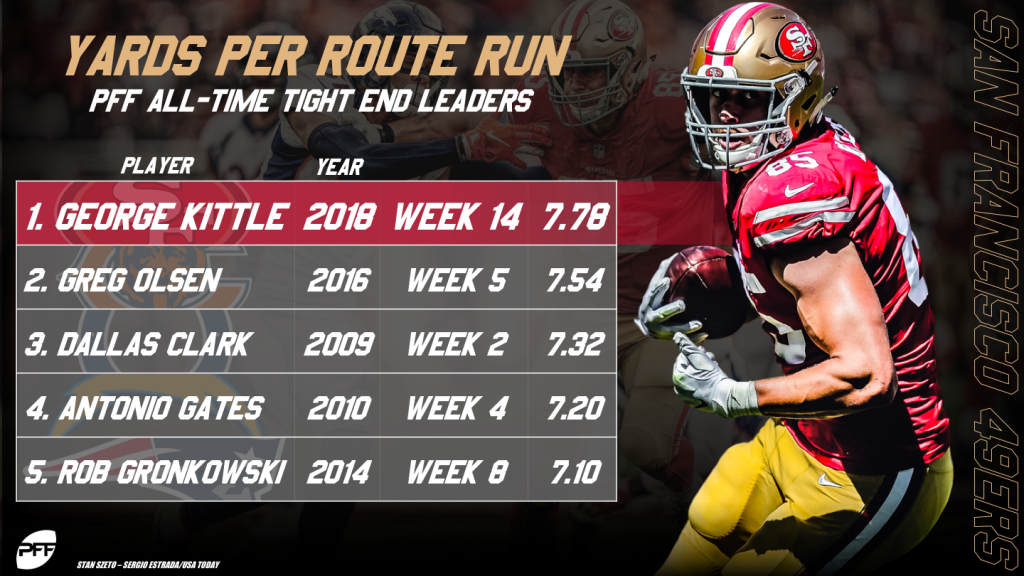 In a season that is littered with explosive plays, the below play was featured on PFF's Plays Of The Week and was arguably one of his best of the season. Late in the first quarter, he powered through the Denver defense with some strong running and nifty footwork for the big play after the catch – just typifying the type of year that the former Hawkeye is having.

Kittle has truly made his mark on the NFL season, and his success in facets of the game that tight ends don't usually excel at is staggering. After all, he’s put up these numbers largely with backups C.J. Beathard and Nick Mullens at the helm — so when Jimmy Garoppolo returns next season, the 49ers could have an elite quarterback-tight end duo in their arsenal.