You’ve scratched and clawed your way to Week 16, aka fantasy football’s championship week, but the grind isn’t over quite yet when it comes to assessing fluid running back situations across the league. That’s especially true for fantasy owners of any of the slew of injured backs, from Todd Gurley and Melvin Gordon to James Conner and Spencer Ware and Matt Breida.

For those in such a pinch, be sure to check our weekly waiver advice and start/sit articles. You don’t need me to tell you that Elijah McGuire and Jamaal Williams are the last men standing in their respective backfields and in the RB2 conversation.

Here, we look at running backs who are part of a committee and trending up or down based on various PFF premium data points. The name of the game here is to properly identify those players far enough in advance so that, hopefully, you already have one or more of our top-ranked RBs for Week 16 picks rostered. On the flip side of that, perhaps you also keyed in on some earlier analysis and knew when to fade guys like Dion Lewis, James White, and Sony Michel.

Before we dig into the top-three running backs who are trending up or down for Week 16, let’s take a quick look at how things panned out for the players discussed last week.

Notes: Going back to Week 12 when Jackson began to see the field, he ranks 18th in fantasy points per touch while averaging 5.0 YPC. You can have Austin Ekeler, I’m taking Northwestern’s all-time leading rusher every time. … Better late than never for Henry, I suppose. I mentioned last week that he is now the only qualified RB (min. 100 attempts) to rank in the top-10 in elusive rating each of the last three seasons, and he now owns PFF’s second-best rushing grade in 2018. … Dixon was on the field for six more plays than Gus Edwards as he logged 51% of the Ravens’ offensive snaps on Sunday, up from 32% the previous week and 21% the week before that. Dixon also forced five missed tackles on 11 carries, averaging 4.1 yards after contact. … Even at a deep draft-day discount, I don’t envision myself owning any stock in a 31-year-old and breaking down McCoy next season. … Solid day for Barber, although he still ranks just 46th in elusive rating over the last three weeks and is averaging 9.7 PPR points per game this season.

Below are three running backs trending up and three trending down in their respective backfield committees. If you are a PFF Elite subscriber, our Handcuff Index chart is a handy reference.

Despite missing four games, Mack is still within earshot of a 1,000-yard campaign in his second pro season. Still, following his back-to-back 100-yard games in October, things were hit or miss for a while for Mack and the Colts’ ground game. However, Mack came roaring back with a career-high 139 yards and two touchdowns on 27 carries against Dallas. In doing so, he forced six missed tackles and had six runs of nine-plus yards and gained at least six on 13 carries, as he repeatedly gashed the Cowboys’ front for chunk gains. Certainly, the return of center Ryan Kelly had a lot to do with that, although Mack has posted a better PFF rushing grade this season (No. 21) than the likes of James Conner, Christian McCaffrey, and Ezekiel Elliott.

With the ageless Frank Gore lost to a season-ending injury, Dolphins coach Adam Gase turned to Ballage against Minnesota and not Kenyan Drake, who saw only one carry. While Drake did play two more snaps, Ballage got 12 carries and produced 123 yards, including a 75-yard scoring scamper on the opening play of the second half. Back in the summer, Ballage was the guy I had earmarked as the Dolphins’ handcuff to watch, more so for his athletic profile as a 6-3, 230-pound back with soft hands than for his production at Arizona State. Granted, most of his yardage last week came on one big run as he didn’t force any missed tackles on 17 touches, essentially getting what was blocked. That’s not necessarily a bad thing for a hungry back with sound vision – Damien Williams didn’t slip any tackles as a runner last Thursday and still put up 30 fantasy points — nevertheless it bears mention on an offense with limited opportunities to go around. 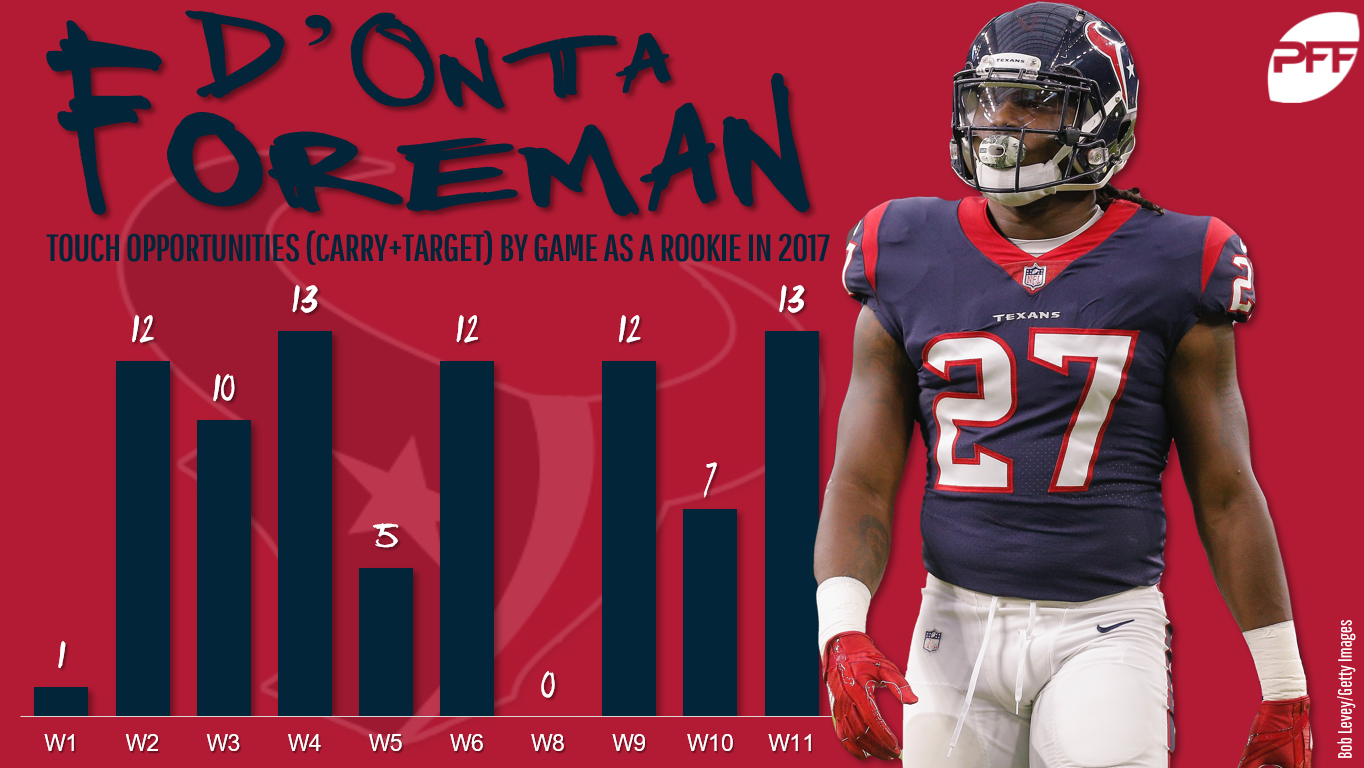 Somewhat surprisingly, based on what we’ve seen from him over the previous two seasons with the Texans, Lamar Miller has hung around as a fantasy RB2 (No. 21). He is getting 4.8 YPC, his best average since running for a career-high 1,099 yards with Miami in 2014. However, an ankle injury caused him to miss the entire second half in last week’s win, although Miller did return to limited practice on Wednesday. With Miller less than 100%, this looks like it may finally be the week that Foreman makes his 2018 debut. Assuming the Achilles is good to go, I’m still not ready to give up on the second-year back who ran for 2,000 yards his final year at Texas. Two weeks may not be enough to sell the Texans’ on his ability to carry the load in 2019, but Foreman did see double-digit carries in half of his games last year as a rookie, finishing with 65 yards and two scores on 10 carries in his last game.

Adams first appeared in this space prior to Week 9 as Corey Clement and Wendell Smallwood faltered their opportunities in the wake of Jay Ajayi’s season-ending injury. During a five-game stretch Weeks 8-13, Adams produced at a 1,000-yard season’s pace while averaging 5.1 YPC and a 20.0% missed tackle rate. Most encouraging were back-to-back games with 20-plus carries as the Eagles’ clear workhorse. Over the past two weeks, however, he’s managed only 64 yards on 22 carries (2.9 YPC), albeit with a salvaging touchdown against the Rams. Still, the combination of spotty workload and production for a game script-dependent back is unsettling enough to look elsewhere for your flex starter this week.

Here are the facts: Fournette has played in seven out of a possible 14 games for Jacksonville this season and has not crossed the 100-yard rushing mark in any one game. Over his last two outings, he has touched the ball 30 times without forcing a single missed tackle, good for a 0.0 elusive rating. On the season, Fournette owns our eighth-worst elusive rating (22.8) out of 58 qualifiers. Banged up or not, for a 6-0, 228-pound specimen like Fournette to average only 2.35 yards after contact (51st) is unacceptable. Even though Carlos Hyde was a healthy scratch this past week, the fact that Jacksonville went out and signed him in the first place speaks to how delicate Fournette’s standing may be in the front office’s eyes. 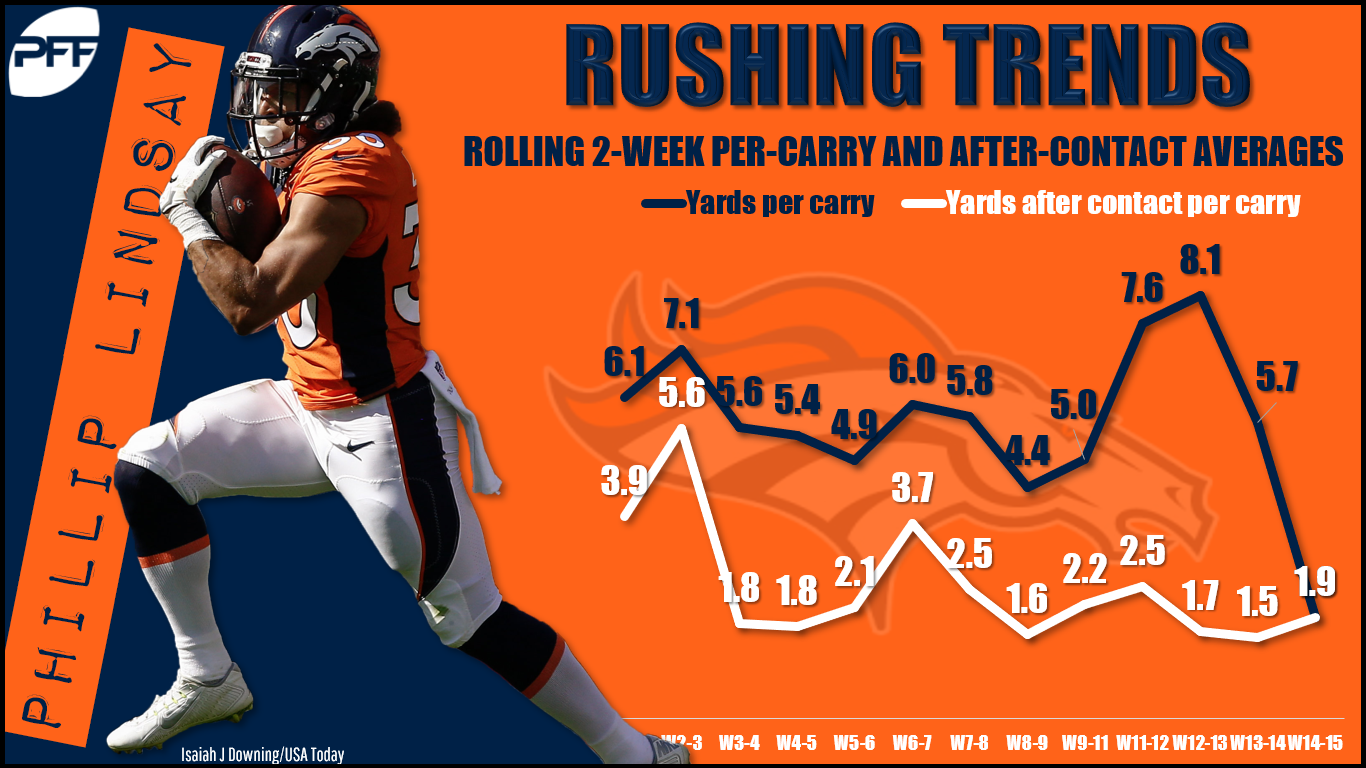 Look, you’re starting Lindsay this week against a soft Raiders defense. Now that we’ve got that out of the way, things are definitely not business as usual for Denver’s ground game, even with undrafted rookie Lindsay fresh off a Pro Bowl nod. Over the past two weeks, Lindsay has been stymied to the tune of 54 yards on 28 carries (1.9) in back-to-back close losses. Gamescript isn’t so much to blame as the simple truth that defenses don’t fear Case Keenum and what’s left of the Broncos’ perimeter weapons. Matchup isn’t to blame, either, not against two of PFF’s worst-graded run defenses in San Francisco and Cleveland. If I’m a fantasy player who rode Lindsay into the championship round, I’d be equally pumped and nervous right now.