Hey everyone! We’re back with a look at some of the best start-and-sit fantasy football options for Week 16. Hopefully I’ve been steering you in the right direction for the better part of your fantasy season. Good luck this week in what should be your league’s championship week.

Here are my recommendations for Week 16. 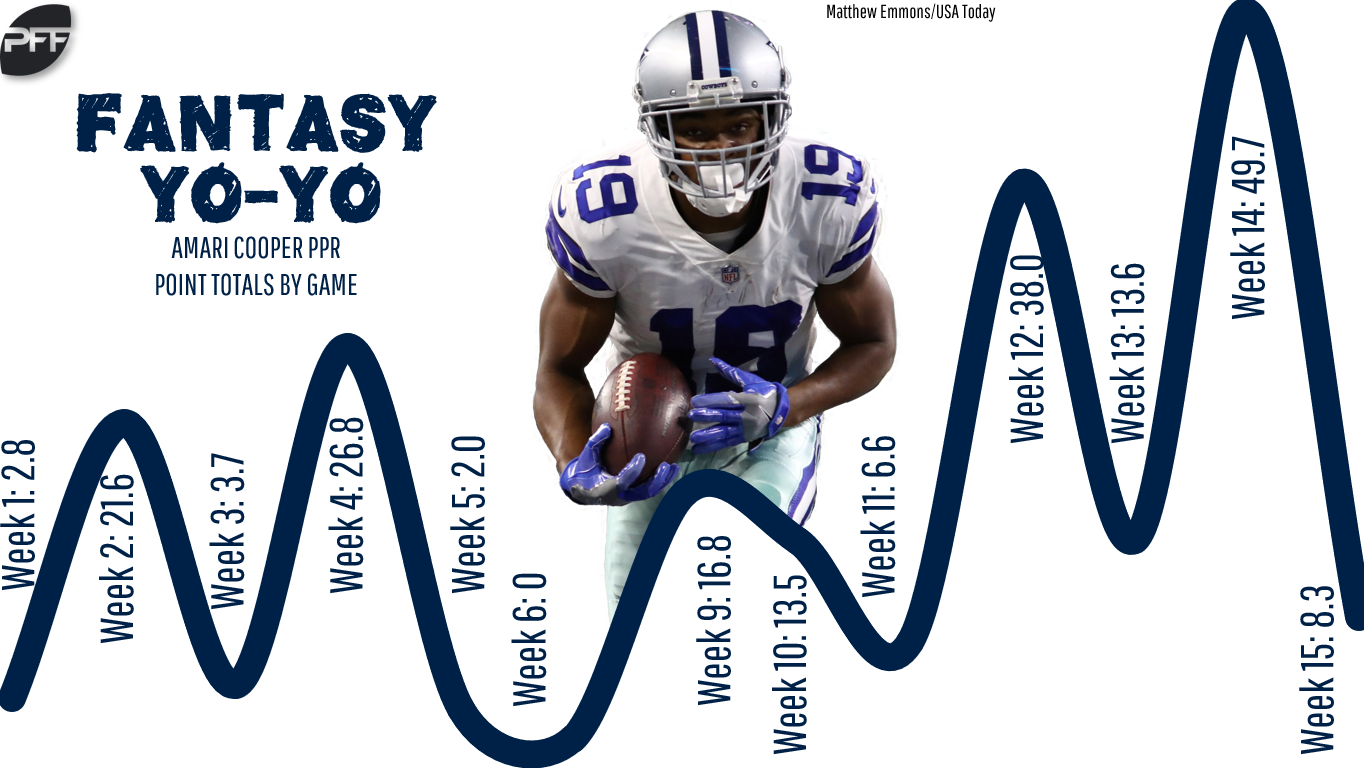 Cooper was fantasy’s most boom-or-bust player in 2017, and he’s reprised that role in 2018. He “boomed” in Week 14 and then “busted” in Week 15, but his fantasy point per game average (21.9) since joining the Cowboys still ranks third-best at the position. You should be getting another “boom” game from him this week, up against a Buccaneers defense that ranks second-worst in schedule-adjusted fantasy points per game allowed to opposing WR1s.

Sure, Lindsay has just 54 yards rushing over the past two weeks, but he's also seen improved volume over this stretch. And let’s not forget that he was arguably the league’s most efficient running back for the first 13 weeks of the season. This feels like a get-right spot for him anyway, as slight favorites (-2.5) up against the league’s top “run funnel” defense. Oakland is surrendering a league-high 2.79 points per drive and has seen 38% of their yardage come via the run (second-most). Oakland ranks fifth-worst in yards allowed per carry (4.87) and fourth-worst in rushing fantasy points allowed per game (17.5). He’s a low-end RB1 this week.

Thielen led all wide receivers in fantasy points per game (25.5) through the first eight weeks of the season but ranks just 22nd (13.9) since Week 9. He’s also coming off of his worst outing of the season – a two-target, 3.9-fantasy-point game against the Dolphins. I see this as a “get-right” spot for him. With Stefon Diggs in shadow coverage against Darius Slay, Kirk Cousins would be wise to lean heavy on Thielen up against a Detroit defense that is allowing the seventh-most fantasy points per game to opposing slot wide receivers.

Henry has 50 carries, 408 yards, and six touchdowns over his last two games. Tennessee is favored by 10 points. Since Week 9, Washington is giving up 28.2 fantasy points per game and 5.24 yards per carry to opposing running backs. You’re starting him.

Since Week 11, Allen ranks first (24.5), Hilton third (22.8), and Jones fifth (20.8) among wide receivers in fantasy points per game. Although all are dealing with injury, each one should be started if active.

Is it time to panic on Fournette? Probably. Over the past two weeks, he averages just 15.0 touches and 7.8 fantasy points per game. As four-point underdogs with a 17.0-point implied total (fourth-lowest), this offense feels really hard to trust. Sure, Miami is giving up the sixth-most fantasy points per game to opposing running backs, but I wrote up Washington as an even softer matchup for Fournette last week. He might not necessarily be a “sit” in your league, but I am bumping him down to the fringe-RB2-range. 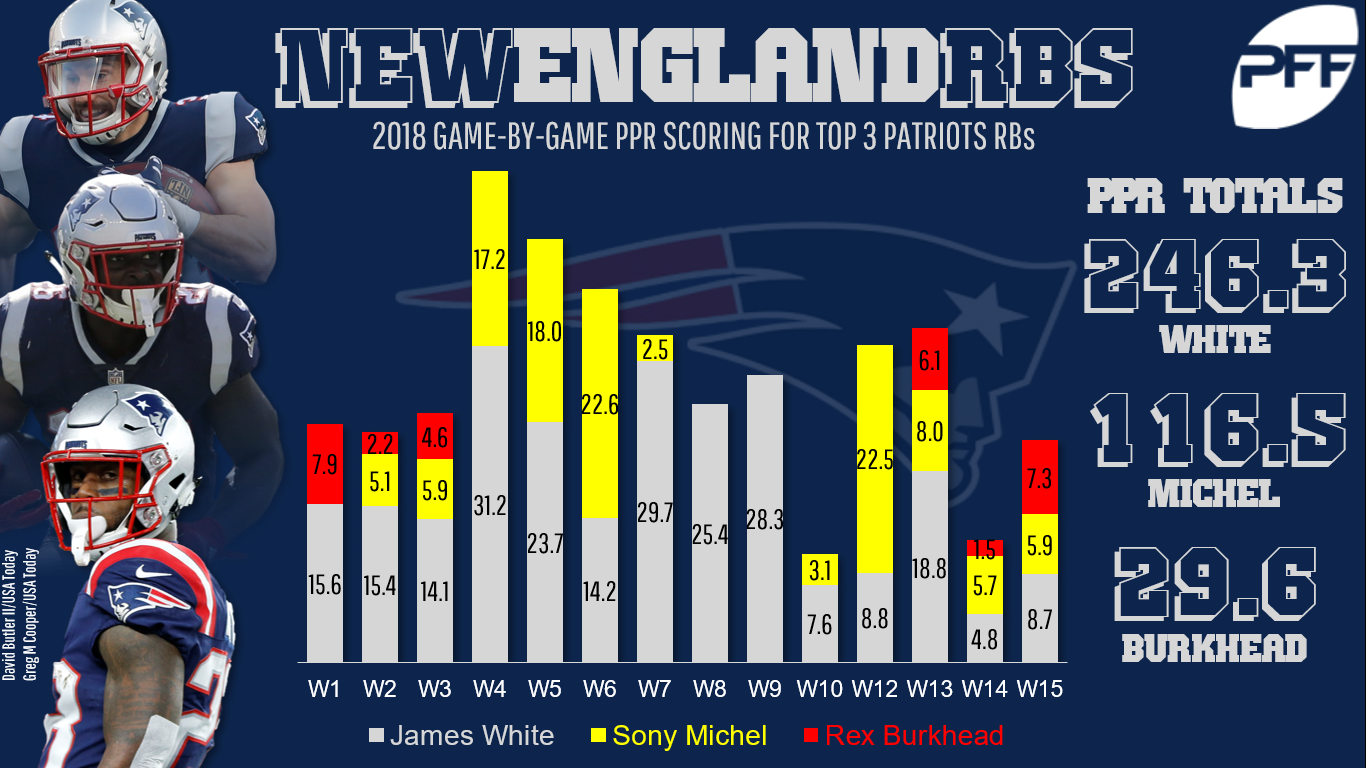 Michel has disappointed since Rex Burkhead‘s return to the lineup. He totals just 65% of the team's carries over this span and 25% of the team’s carries inside the five-yard line over this span. Sure, negative gamescript has also played a role, and that shouldn’t be a problem this week as 13.0-point favorites against the Bills. Even so, he’s too risky to start as anything more than a borderline RB2 this week.

Golladay is probably only a “sit” if your team is stacked, but he has dropped in my rankings this week (down to the borderline WR2-range). We’re expecting him to draw shadow coverage from Xavier Rhodes this week. In nine shadow games from Rhodes this year, and against some of the league’s best wide receivers, he is surrendering just 31.0 yards per game (into his coverage), and Davante Adams is the only receiver who has found the end zone against him. That said, Golladay ran 43% of his routes from the slot last week (to get him away from Tre'Davious White‘s shadow coverage) and he posted a monster game (seven catches for 146 yards). He isn’t an outright fade, but the matchup is still below average. 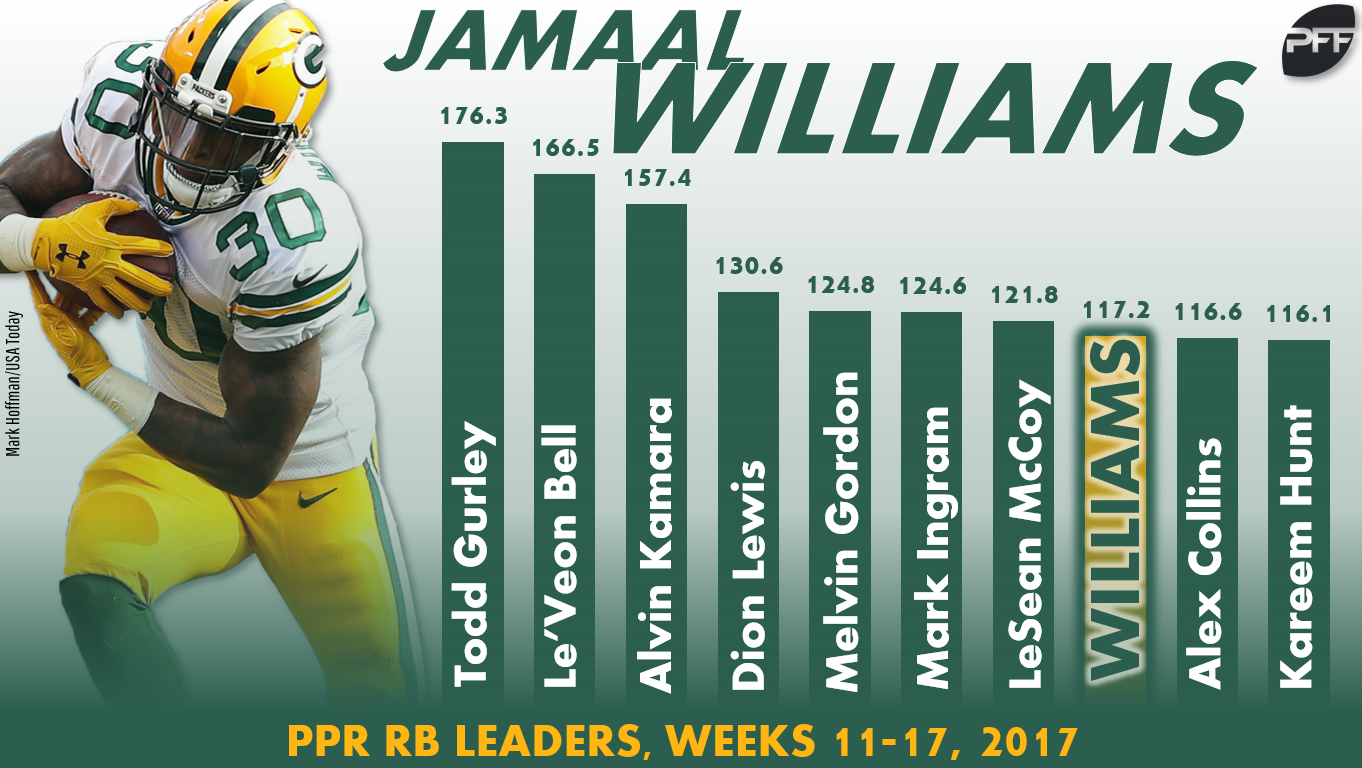 With Aaron Jones out, Williams is likely to assume the bell-cow workload he saw last week (87% of the snaps) and at the tail end of last year. From Week 11 to 17 in 2017, Williams played on 91% of the snaps. Over that seven-game span, Williams averaged 18.7 carries, 4.7 targets, 18.3 expected fantasy points, and 19.0 actual fantasy points per game. Keep in mind, Aaron Rodgers played on only 15% of the snaps over this span. Even if Rodgers sits, he’s a low-end RB2 this week.

Over the last two weeks, McGuire has played on 74% of the snaps, while ranking top-15 among running backs in both expected (17.0) and actual fantasy points per game (16.7). He comes off of a tough matchup against Houston (second-best in yards allowed per carry) to face a more neutral Green Bay defense this week.

Over the last four weeks, Pettis ranks seventh at the position in fantasy points (18.7), while averaging 84.5 yards and 1.0 touchdown per game. His lack of volume over this span (5.5 targets per game), implies a looming regression, but you’re still going to be starting him this week as a borderline WR2, up against a Bears defense that is giving up the third-most fantasy points per game to opposing left wide receivers (where Pettis runs 44% of his routes) 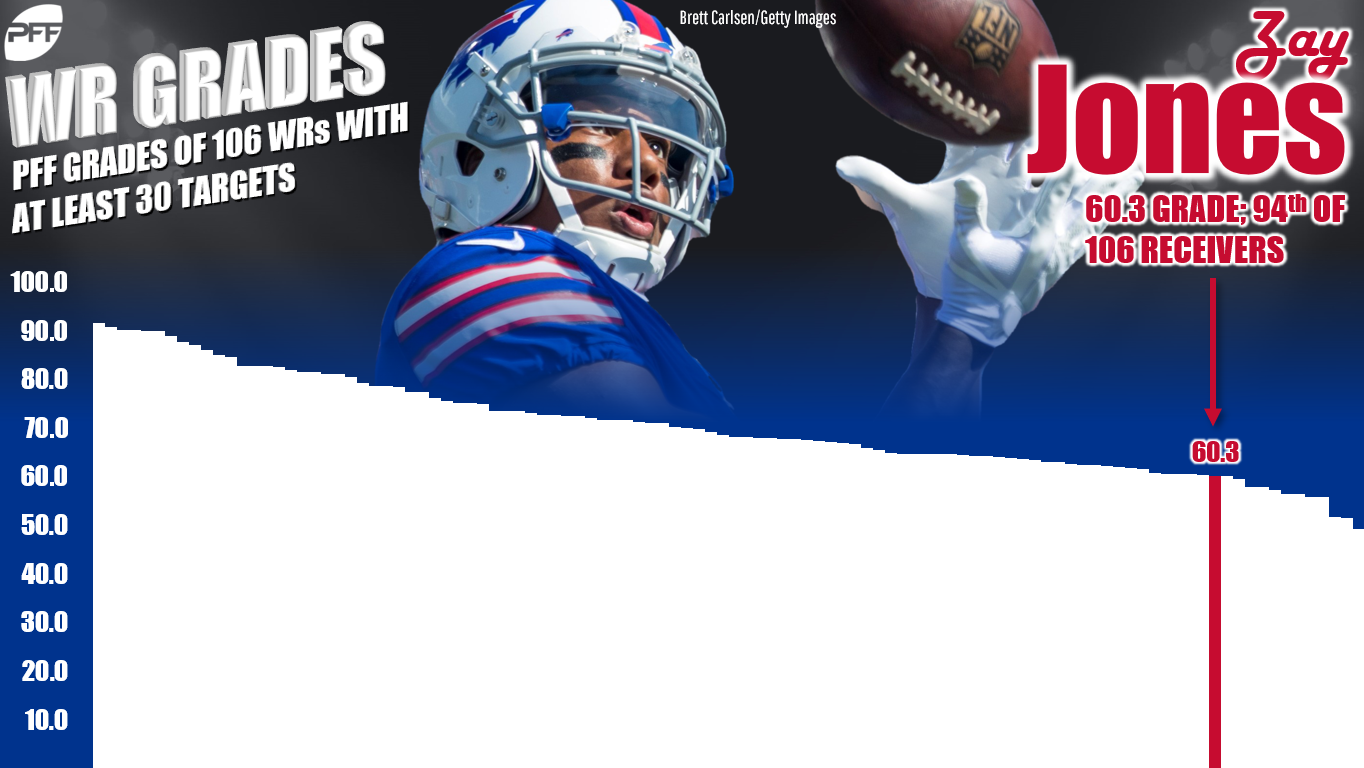 Jones grades out 100th of 128 qualifying wide receivers. This week he'll be shadowed by Stephon Gilmore. Gilmore is our highest-graded cornerback. Yeah, he's a fade.

Even with Frank Gore out, I’m hesitant to start Ballage as anything more than a high-end RB3. I think Kenyan Drake is locked into the pass-catching role, so even if Ballage assumes all of Gore’s lost work, it’s not a lot. Gore averaged 11.1 carries, 1.1 targets, and 7.1 expected fantasy points per game (60th at the position). The matchup is also tougher than average. If excluding Derrick Henry’s monster Week 14 against Jacksonville, they’d rank third-best in rushing fantasy points per game allowed to opposing running backs.

Since returning from injury in Week 12, Allen leads all quarterbacks in fantasy points scored, with 55% of his production coming on the ground. This week he gets a New England defense that ranks fifth-worst in schedule-adjusted fantasy points per game allowed to opposing quarterbacks. The two mobile quarterbacks they faced (Mitchell Trubisky and Deshaun Watson) combined for 14 carries, 121 yards, and a touchdown on the ground. I have Allen ranked as a fringe-QB1 this week.

Over the last two weeks with Odell Beckham Jr. out, Engram leads the team in targets by four (17 total) and receiving yardage by 98 (152 total). Even if Beckham suits up, I like his chances at another big game this week. Indianapolis ranks second-worst in schedule adjusted fantasy points per game allowed to opposing tight ends (both over the full season and over the last five weeks of the season).

Last week, Edwards out-touched Dixon 19 to 12, but Dixon out-snapped Edwards 39 to 33. Edwards was also more productive, totaling 109 yards to Dixon’s 50. On paper, the matchup looks favorable – Los Angeles is giving up a whopping 31.2 fantasy points per game to opposing running backs over their last five games. Over the full season, the Chargers are giving up the ninth-most fantasy points per game to opposing running backs, but 51% of that has come through the air (eighth-most). The Chargers are also favored by 4.5-points, and if they pull away with a lead, this might force the team to lean heavier on Dixon — Baltimore doesn’t really trust Edwards in the passing game (he has one target all year). Even so, Baltimore has gone insanely run-heavy since transitioning to Lamar Jackson, and I’d expect Edwards to receive a minimum of 15 touches this week. As it stands, I wouldn’t be shocked if Dixon outscores Edwards, but I have Edwards higher in my rankings, as a borderline RB2 (to Dixon’s borderline RB3).

From the Week 16 Actual Opportunity Report:

He also has a soft matchup this week, in the slot (57% of his routes) against Marcus Gilchrist in the slot, who ranks 12th-worst at his position (of 85 qualifying). He’s a low-end WR3 this week.