Hello, and welcome to the Week 16 (championship edition) Actual Opportunity report. This is our weekly look at the players with the most fantasy potential based on volume, and how effective they’ve been with it. If you’re unfamiliar with Actual Opportunity, you can read the in-depth explanation here.

After 15 weeks of action, here are the top 30 players in expected fantasy points per game: 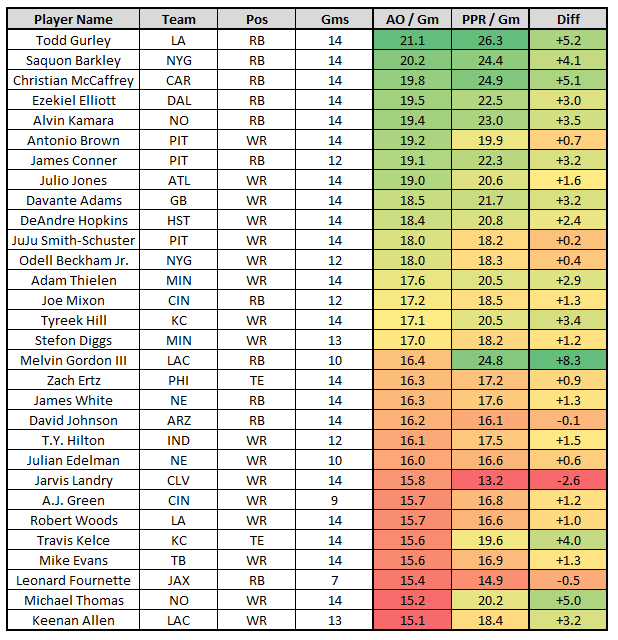 The production hasn't been there for Josh Reynolds in recent weeks, but volume has been strong since the team lost Cooper Kupp in Week 10. Over this span, he averages 16.0 expected fantasy points per game, ranking 13th among all wide receivers. This is actually a good deal better than Brandin Cooks‘ 12.8 expected fantasy point average, which ranks 22nd over this span. Cooks is an especially risky start this week, with the potential to draw Patrick Peterson in shadow coverage. Robert Woods, meanwhile, will be safe in the slot – he’s run 71% of his routes from the slot over this span. Arizona ranks sixth-worst in fantasy points per game to opposing slot wide receivers. He’s also seen tremendous volume over this stretch, ranking fifth among wide receivers with a 19.0-point per game expectation.

Frank Gore, Isaiah Crowell, Ito Smith, and Aaron Jones are out; Todd Gurley, Matt Breida, and Spencer Ware are day to day; and Lamar Miller is somewhere between questionable and probable. This has the potential to open up a ton of value for names like Kalen Ballage, Elijah McGuire, Tevin Coleman, Jamaal Williams, John Kelly, Jeff Wilson Jr., Damien Williams, and Alfred Blue. I’ll discuss each player in some depth below.