But who IS that guy?

While many will argue tooth and nail against using precious draft capital on a “handcuff,” many others would simply rather be too early than too late on a potential league-winner. Below are some of the top backups or No. 2 RBs to know for fantasy in 2018. This isn’t a case for or against handcuffing, per se, but rather names to earmark as priority backups if things break a certain way.

Excluded are presumed co-starters and RBs with standalone value, i.e. no one inside our fantasy staff’s top-40 consensus PPR rankings. So, no Tevin Coleman or Dion Lewis types. No C.J. Andersons or Rex Burkheads or Duke Johnsons. In other words, if best-ball or zero-RB happens to be your thing, then these are your people.

Cleveland’s initial depth chart has Carlos Hyde on the first team, which should not be a surprise after the veteran finished RB8 in PPR scoring last season. Duke Johnson Jr. (RB11) is listed with the second unit, while rookie Chubb is currently on the third team. The three are closely grouped in the eyes of the fantasy community, with Hyde (RB35), Johnson (RB38) and Chubb (RB39) all going between the eighth and ninth round on average. While Johnson’s passing-game role figures to remain steady, Chubb currently offers the best value at RB46 in our staff’s consensus PPR rankings. Isaiah Crowell saw a career-high 206 carries last season despite a 61.4 rushing grade that ranked 71st at the position. Chubb would vault to RB2 fantasy status if Hyde were to miss time.

Jamaal Williams is a few spots higher in our rankings (RB37), but fellow second-year back Jones (RB42) is the Packers’ RB with the higher ceiling. In his only four starts as a rookie, Jones averaged 86.5 yards on 15.5 carries (5.6 YPC) with three touchdowns. Granted, it’s often not wise to extrapolate a four-game sample size, but those are RB1 fantasy numbers over a full slate (248 carries, 1,384 yards, 12 TDs). His current ADP toward the back of the 10th round is partly due to a two-game suspension to start the season. Of course, it also presents nice value for a player one year removed from rushing for 1,773 yards (7.7 YPC) at UTEP.

Owner of the top SPARQ rating in last year’s RB draft class, Breida is entrenched as the No. 2 RB on the 49ers’ depth chart. The man he’s behind, Jerick McKinnon, owns a SPARQ score in the 100 percentile and was just signed to a four-year deal worth up to $37 million, presumably to be “The Man” in San Francisco. In case you didn’t know, Breida and McKinnon were also teammates for one year at Georgia Southern. McKinnon no doubt has his detractors after averaging 3.6 YPC over his last two seasons in Minnesota. He did, however, did post the No. 12 elusive rating last season (min. 100 carries), and he now gets to run behind a 49ers team that had the sixth-best run-blocking grade.

Murray’s path to fantasy relevance is one that has already been carved out. While perhaps not a “sexy” fantasy pick, Murray is two years removed from a 1,000-yard rushing season and has racked up 20 TDs on the ground since 2016. In the wake of Dalvin Cook’s season-ending injury last season, Murray was the RB9 in standard formats from Week 5 on. His 16-game pace in that span was 1,072 yards and 11 TDs despite splitting time with McKinnon. And while hope abounds for Cook, the fact remains that he is coming off a rather significant knee injury and has only four career games under his belt.

Ware’s fantasy stock is way down partly because of the emergence of Kareem Hunt, and partly because Ware missed all of 2017 with a knee injury. It’s easy to forget that Ware was slated to be the Chiefs’ lead back entering last season. The 26-year-old heads into a contract season having averaged 4.6 yards on 286 carries over his previous two seasons. Considering that Andy Reid’s lead backs have averaged 19 PPR points per game in his coaching career, the opportunity is certainly there for Ware to step into a featured role, and deliver, if and when called upon. 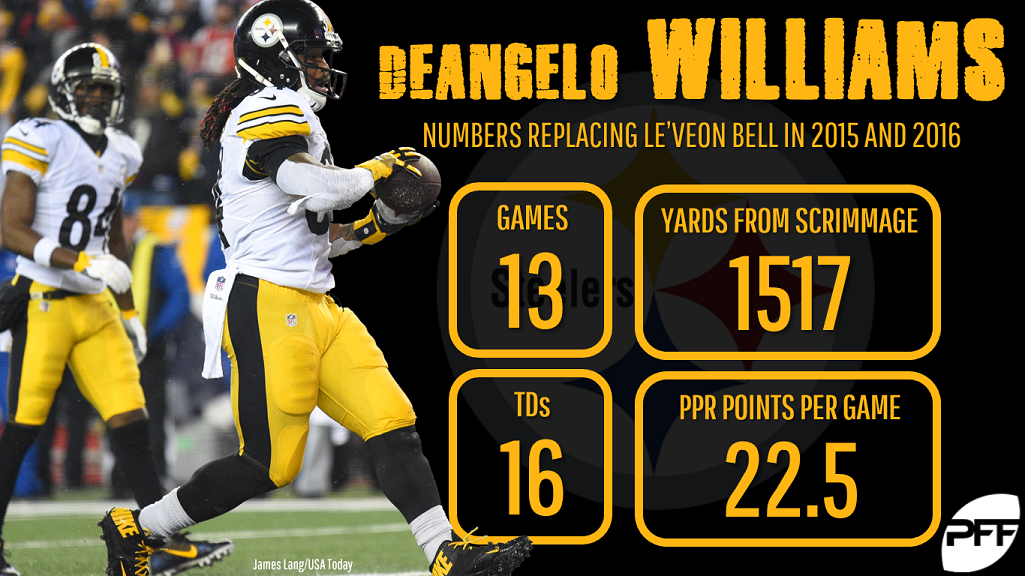 The case for the inclusion of second-year RB Conner on this list is pretty simple: Mike Tomlin doesn’t do committees. Of course, Le’Veon Bell touched the ball a league-high 406 yards last season because, well, he’s Le’Veon Bell. Still, you may recall that DeAngelo Williams averaged 23 fantasy points per game over the 13 games he started and finished while with the Steelers in 2015 and 2016. Williams was on the field for 92 percent of the offensive snaps during that time. Enter Conner, who once turned in a 1,700-yard, 26-touchdown rushing season in a power conference. Now healthy, Conner has been turning heads at Steelers’ camp.

Clement averaged 0.45 fantasy points per opportunity as an undrafted rookie free agent out of Wisconsin, besting all but six of the running backs currently ranked inside of our staff’s consensus PPR rankings for 2018. But how many opportunities will Clement see behind Jay Ajayi this year in Philly? At the moment, it’s a tough question to answer. LeGarrette Blount may have vacated his 181 touches, but Darren Sproles returns after missing all but three games, and the Eagles coaches have not been shy about increasing Ajayi’s workload. Still, in the event Ajayi were to miss time, Clement gets immediate RB2 consideration behind an Eagles O-line coming off a top-four run-blocking grade.

His production at Arizona State won’t jump out at anyone, but in Ballage, the Dolphins got themselves a 6-3, 230-pound back with impressive pass-catching ability. That combination of size and soft hands has had Dolphins’ beat writers gushing, and it’s why offensive coordinator Dowell Loggains talks about Ballage as a three-down back. Yes, the Dolphins signed Frank Gore to push Kenyan Drake, who was one of the league’s most elusive runners in 2017. Then again, Drake was far from a household name this time last year as he didn’t see double-digit carries until December. With an early-season third-down role within reach, Ballage is Miami’s preferred handcuff in PPR formats.

Speaking of Gore, the Colts opted not to replace his 300-ish touches via the free agency route, instead spending a couple of late-round draft picks on Wilkins and Nyheim Hines to push second-year back Marlon Mack. Depending on how you feel about Mack – he’s RB36 in our consensus PPR rankings – Wilkins and Hines are pretty appealing fantasy lottery tickets. While the Colts coaches have toyed with moving Hines (5-9, 198) all around the formation a la Dexter McCluster, Wilkins (6-1, 216) is the direct threat to Mack’s early-down workload. Wilkins posted the seventh-best elusive rating in this year’s RB draft class, and he’s been mixing in with the first team in training camp. Not bad value for a player going undrafted in most leagues.

Leonard Fournette averaged 23 touches per game as a rookie, missing three contests with a chronic ankle problem that has plagued him since LSU. Naturally, the backup RB gig for a team that just led the league in rushing attempts is of interest to the fantasy community. Fourth-year back Corey Grant has done well with his limited opportunities, averaging 6.1 yards on 68 career carries. But when asked about his backfield recently, head coach Doug Marrone described Grant (5-11, 203) as a change-of-pace back and Yeldon (6-1, 223) as a back that can carry the load. Of course, Yeldon was a perennial 1,000-yard rusher at Alabama despite splitting carries with the likes of Eddie Lacy and Derrick Henry. Coachspeak or not, there is RB2 appeal here in the event of an injury to Fournette.

Now we’re getting into the really fun names for deep leagues. While not yet a familiar name in the NFL, folks throughout Illinois are plenty familiar with Jackson, who was a decorated high school running back and then went on to become Northwestern’s all-time leading rusher. In compiling his first career 1,000-yard rushing season in 2017, Melvin Gordon saw more than two-thirds of the Chargers’ backfield carries along with 73 pass targets. With Gordon coming off a 342-touch season, Austin Ekeler is the only other running back on the roster with an NFL carry. While productive in spurts, Ekeler has never been asked to log more than 10 carries in a game above the NCAA Division II level.

Like Fournette in Jacksonville and Gordon in Los Angeles, Todd Gurley is not one to split carries. The fourth-year back has averaged 21 touches per game in his young career and currently carries an ADP as the top overall fantasy pick. Those who invest such a pick in Gurley will want to keep tabs on Kelly, who happens to be virtually identical in size (5-9, 205) and stature to former Tennessee Volunteers teammate Alvin Kamara. Like Kamara, Kelly didn’t exactly light up box scores on a weekly basis in college, though he displayed a three-down skillset and solid instincts while improving his PFF grade each season.