A crucial consideration when compiling fantasy football rankings is the aging curve. Whether a player is entering prime/peak years, entering a likely decline phase, or anything in between must be taken into consideration. Every player is unique, of course, but in the aggregate things become more predictable.

I was curious how various positions perform for fantasy at various stages throughout their careers. Do running backs really have the shortest shelf-life? When do wide receivers hit their peak? Is the sophomore season really the time to look for breakout seasons by tight ends? What does this mean for dynasty and redraft leagues in 2019?

My methodology was fairly simple. We’re looking at all players between 2000 and 2018 who had their rookie seasons within our sample and met our threshold of having at least one top-12 season (top-six for tight ends) over this span. I then looked at these players throughout their careers, took their average fantasy points scored per season, and contrasted that with their actual fantasy points in that year of their career.

Here’s our results, with accompanying analysis (and 2019 takeaways) below: 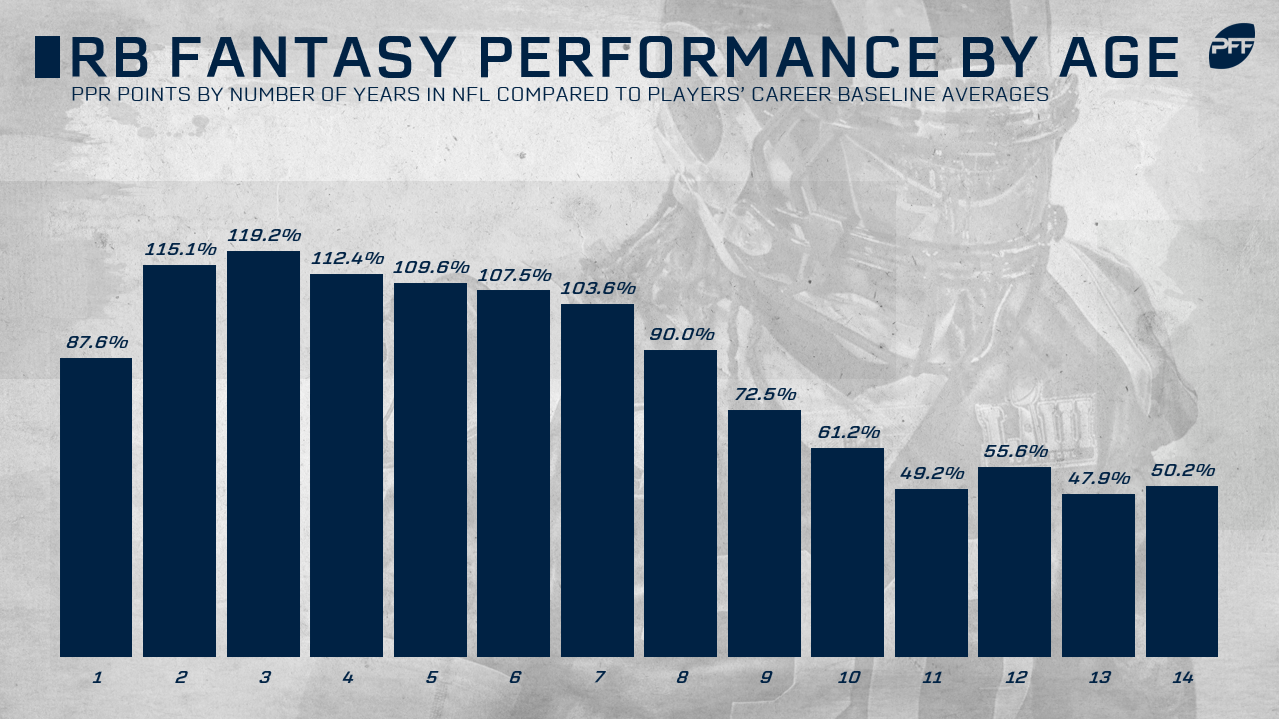 With running backs, the common narrative holds true. Running backs are most valuable for fantasy during their rookie contracts, peaking in Year 3, and then experiencing a significant dropoff in every subsequent season. After Year 7, they stop producing in line with their baseline average and begin to (quite visibly) fall off a cliff, returning averages of 90% in Year 8, then 73%, and then 60%. Rookie running backs outperform rookie wide receivers and tight ends, scoring 88% of their baseline average in rookie seasons, while those numbers sit at 63% for both wide receivers and tight ends.

Although this analysis is based purely on fantasy points and not on something more substantive from a real-NFL perspective, I do think it’s typically wiser to invest in running backs via the draft than in free agency. From a fantasy perspective, the takeaway is fairly straightforward. Running backs have a shorter shelf-life, and it would be wise to move off older backs in dynasty before the decline, while their value is highest (typically after year four).

Running backs entering their peak year (Year 3) are: Alvin Kamara, Christian McCaffrey, Joe Mixon, Dalvin Cook, Leonard Fournette, James Conner, Aaron Jones, Chris Carson, Marlon Mack, Kareem Hunt, and Tarik Cohen. It’s scary to think that the best running back class since 2008 (maybe longer) is just now entering its collective athletic prime. It seems hard to imagine, but it’s quite possible that for many of these names, their best is yet to come.

The notable players most likely to fall off of the cliff this year are Lamar Miller (entering Year 8) and Mark Ingram (entering Year 9). Both are easy sells in dynasty leagues and potential-fades for redraft leagues. D’Onta Foreman (also entering Year 3) and Justice Hill (Baltimore’s Round 4 pick this year) seem like good values if you want to take advantage of their impending demise. Foreman has injury concerns but Dr. David Chao is optimistic, and so am I. 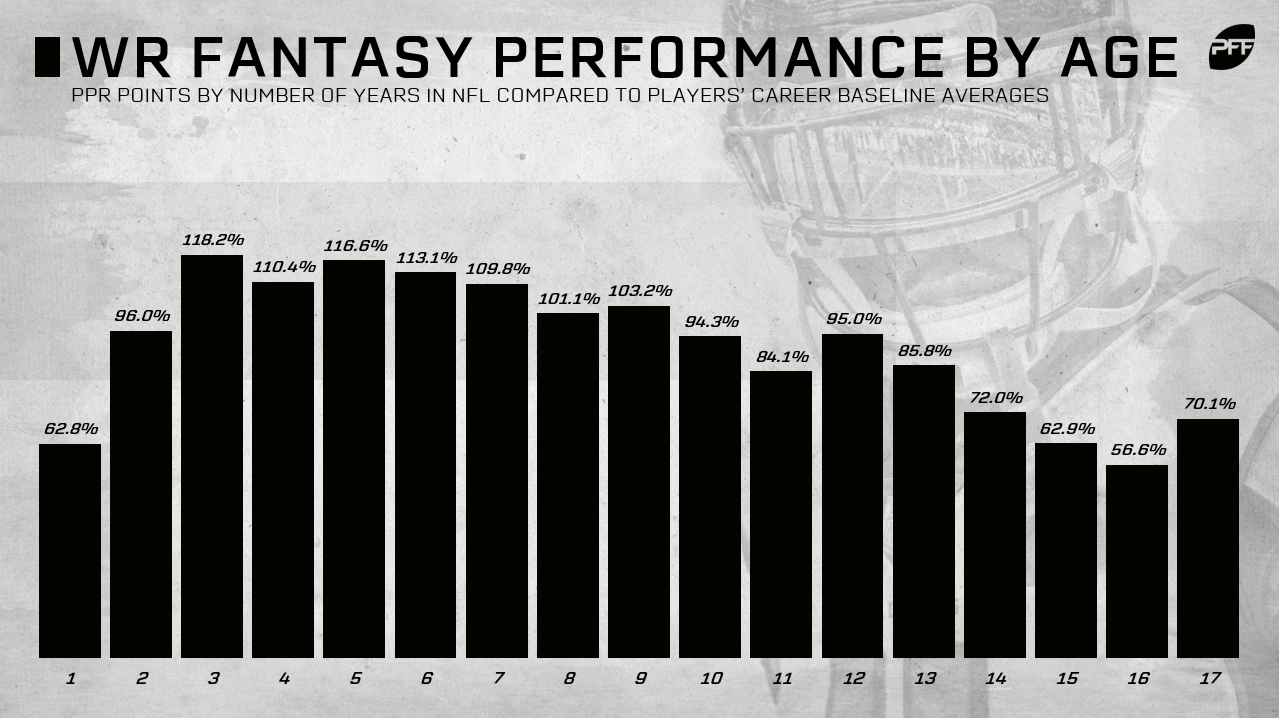 Wide receivers are slower out of the gates than running backs but just about hit their career average in fantasy points by their sophomore seasons (96%). They hit their peak in Year 3 (118%) but come close to that again in Year 5 (117%) and Year 6 (113%). Year 10 is the first year wide receivers start falling short of their baseline average, and then those numbers continue to trend down for the remainder of their careers.

Wide receivers entering Year 3 this year are JuJu Smith-Schuster, Cooper Kupp, Chris Godwin, Kenny Golladay, Corey Davis, Mike Williams, John Ross, Dede Westbrook, Curtis Samuel, and Zay Jones. For fantasy purposes, we can look at this a few ways. One, it’s scary to think Smith-Schuster (three years younger than Kupp, Golladay, and Westbrook) might not yet have even hit his athletic peak. There are concerns over how he might adjust to tougher cornerback competition without Antonio Brown lining up next to him, but it’s also certainly possible he’s just the reincarnation of Brown. Remember, only Randy Moss has scored more fantasy points before turning 23. The second way to look at this is, perhaps, it isn’t yet time to give up on someone like Davis or Ross. Tyler Boyd just had an impressive and unexpected Year 3 breakout. Further, maybe the Godwin and Golladay breakouts really are coming this year.

The following wide receivers are all hitting their fifth season in the NFL this year: Stefon Diggs, Tyler Lockett, Amari Cooper, Adam Humphries, and Jamison Crowder.

In their eighth year in the NFL, wide receivers typically hover around their career baseline average and the continue to decline throughout the remainder of their careers. The relevant wide receivers for this season are T.Y. Hilton and Alshon Jeffery. As I have noted, Philadelphia seemed to have drafted the ideal Jeffery replacement in J.J. Arcega-Whiteside in the second round of the 2019 NFL Draft.

From a dynasty perspective, it might be an even better time to try to sell Julio Jones (entering Year 9), A.J. Green (Year 9), Julian Edelman (Year 10), or Antonio Brown (Year 10).

However, this also seems like a good time to point out some of the flaws in our study. Doug Baldwin and Jordy Nelson also would have made this list, but they’re not just going to decline next year, they’re going to be out of the league, and thus, wouldn’t appear on our chart. Perhaps the better way to study aging curves is by looking at a player’s mortality rate, as Adam Harstad did. Harstad contended with this hypothetical so expertly I felt no need to improve on it with my own analysis, so I’ll just implore you to give that a read.

I’ll also note that maybe “truly elite” players (like, say, Brown) don’t age the same way others do. For instance, tight ends entering their 17th year average 218.9 fantasy points in that season (would have finished fifth-best last season). Of course, there’s only one tight end to ever catch a pass in his 17th season, and that’s Tony Gonzalez. Likewise, Jerry Rice also heavily influenced the tail end of our chart for wide receivers. 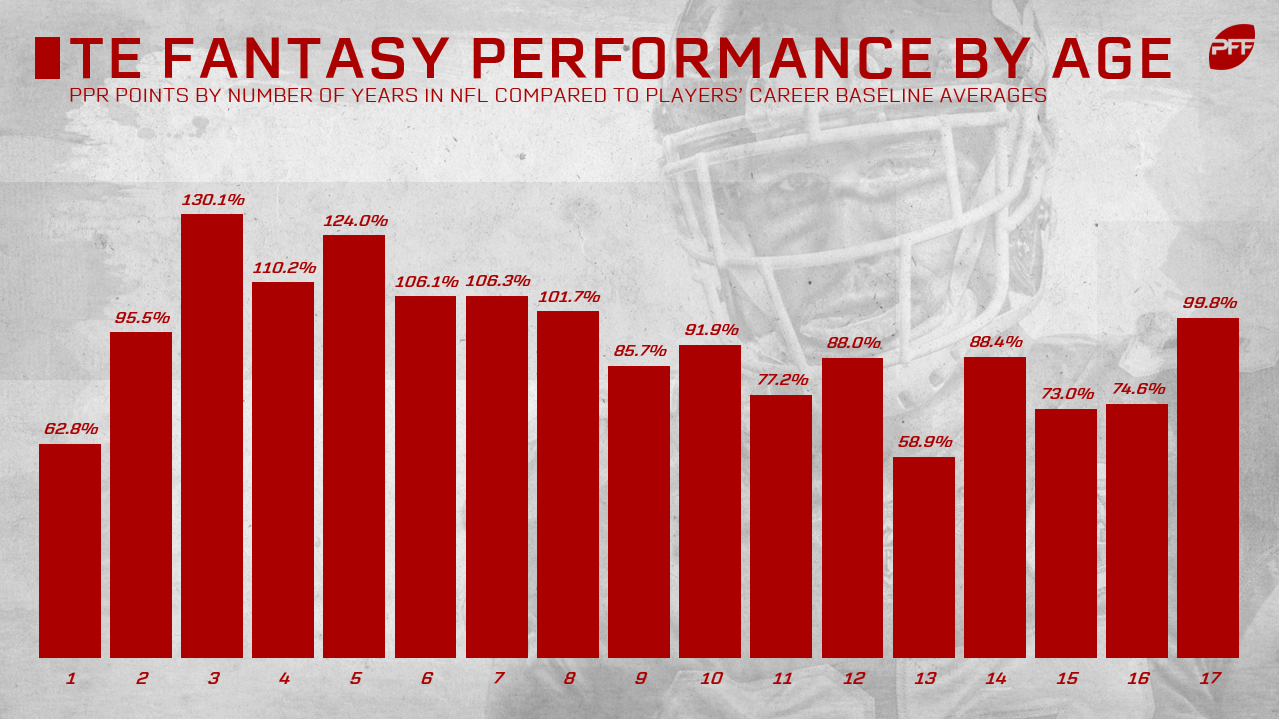 Tight ends double their rookie season expectation (63%) and hit their peak in Year 3 (130%). Year 5 is another good year for tight ends (124%) and tight ends continue perform about in line with their baseline average until Year 9, when they fall from 102% to 86%, starting a steady downward climb.

George Kittle, Evan Engram, O.J. Howard, and David Njoku are all about to enter their Year 3 seasons, and, oh boy, that is exciting. Engram averaged 11.5 fantasy points per game across his first two seasons in the NFL, which is the ninth-most by any tight end all-time. Kittle ranks right above him and just shattered a number of PFF and NFL records in his sophomore season (as I discussed earlier this offseason). In that same article you'll also note Howard's dominance by a number of similar statistics, not including the fact that he would have ranked fifth-best in fantasy points per game last season, if not for injuries. Njoku is a tougher sell but has a good deal of draft capital behind him, and is, like the others, entering his peak year.

Meanwhile, Kyle Rudolph is entering his ninth season, so maybe it’s no surprise the Vikings just drafted his potential replacement in Irv Smith Jr. (a favorite of mine) in the second round. However, like with wide receivers, remember rookie tight ends are typically risky investments in fantasy football.

Jared Cook, Jimmy Graham, Delanie Walker, Greg Olsen, Benjamin Watson, and Antonio Gates are all in the declining phase of their career, so it might be worth tempering our 2019 redraft expectations for them.