When most people think about “injury discounts” in fantasy football, they probably think of someone like Delanie Walker. Last year, Walker played in just one game before dislocating his ankle and spending the rest of the season on IR. Across the previous four seasons, Walker finished sixth, sixth, third, and seventh among tight ends in fantasy points per game. This year, he ranks just 12th at the position in ADP. Although he is 34 years old and this might be an especially difficult injury to come back from at this stage of his career, the most likely reason for his ADP fall is due to being “out of sight, out of mind” after missing most of last year.

Other players like Walker, who were “out of sight, out of mind” after missing a chunk of last season due to injury and might qualify as discounts this year are (in no particular order): Derrius Guice, Hunter Henry, Jerick McKinnon, Devonta Freeman, Jimmy Garoppolo, D’Onta Foreman, Cooper Kupp, Jack Doyle, Jamison Crowder, A.J. Green, and Kerryon Johnson.

Or, when fantasy players think of an injury discount, they might think of someone like Julian Edelman, who including the postseason, averaged 18.3 fantasy points per game after returning from suspension (would have ranked 10th-best), while also reaching at least 16.0 fantasy points in 80% of these games. Though New England has lost 195 targets following the losses of Rob Gronkowski (retirement), Josh Gordon (suspension), and Chris Hogan (free agency), Edelman ranks just 15th in ADP, likely due to a storied injury history, playing in all 16 games just twice in his nine-year career.

However, there are a number of players who don’t typically come to mind in the injury discount conversation who are also deserving of this designation. Namely, that’s players who were playing hurt and on the injury report for a large chunk of last season. Or, players who exited games early due to injury, obscuring their point-per-game averages.

Here are a few of the under-the-radar injury discounts for 2019. 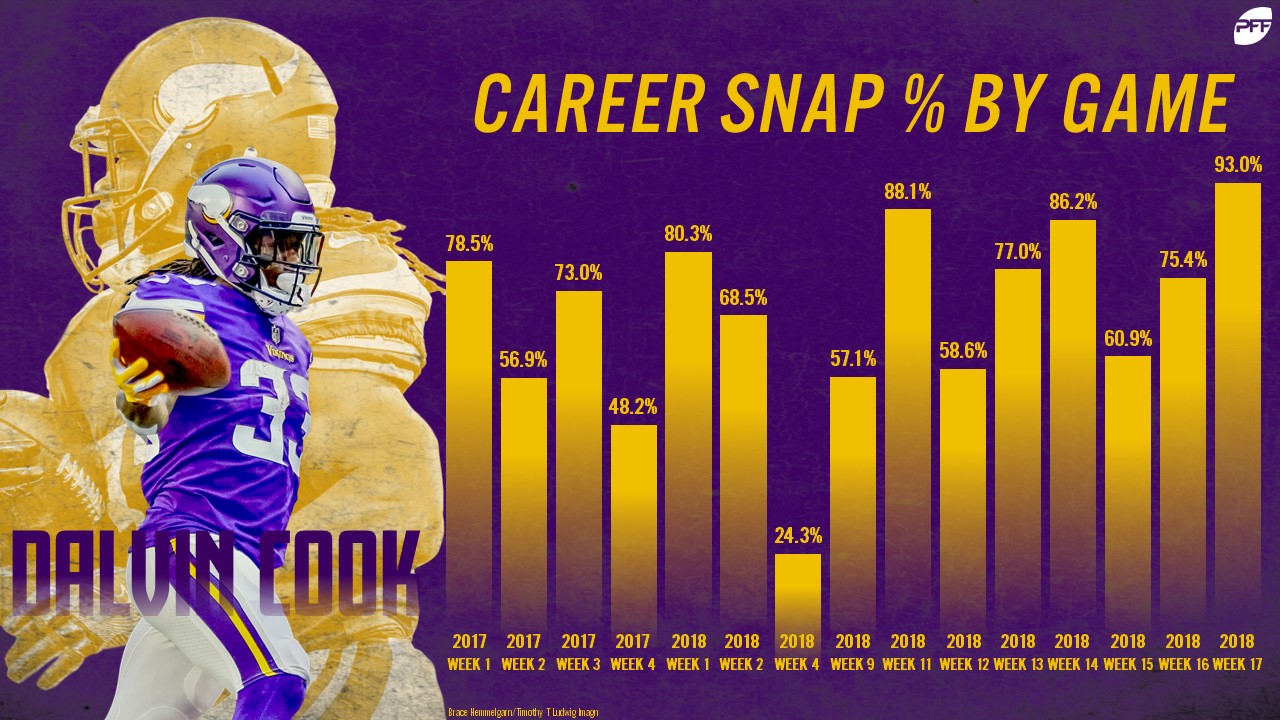 After missing 12 games in 2017, Cook dealt with injuries again in 2018, spending Weeks 3-9 on the injury report. Following the bye, in Week 11, he was fully healthy, and saw a more robust workload. From that point on, until the end of the season, Cook played on 76% of the team’s snaps and averaged 15.7 fantasy points per game. If over a full season, that would have pushed him up from ranking 19th in fantasy points per game (13.8) to 11th.

Mack’s two worst games came while listed as questionable on the injury report. Excluding those two games, Mack jumps from 14.8 to 16.9 fantasy points per game. That equates to a jump from 14th-best at the position to 11th.

In 2019, Michel scored fewer than 5.5 fantasy points four times. Three of those games came when on the injury report. If those three games were excluded, and we included the postseason, Michel averaged 15.4 fantasy points per game last season. That would have ranked tied with David Johnson for 11th-best among running backs.

Watkins dealt with hamstring and foot injuries last season. Including the playoffs, he saw more than 12 snaps in just 10 games. Across those games, he averaged 13.6 fantasy points per game, which would have ranked 25th-best last year. Now, with Tyreek Hill potentially suspended, Watkins has legitimate WR1 upside as Patrick Mahomes’ likely No. 2 option in the passing game. 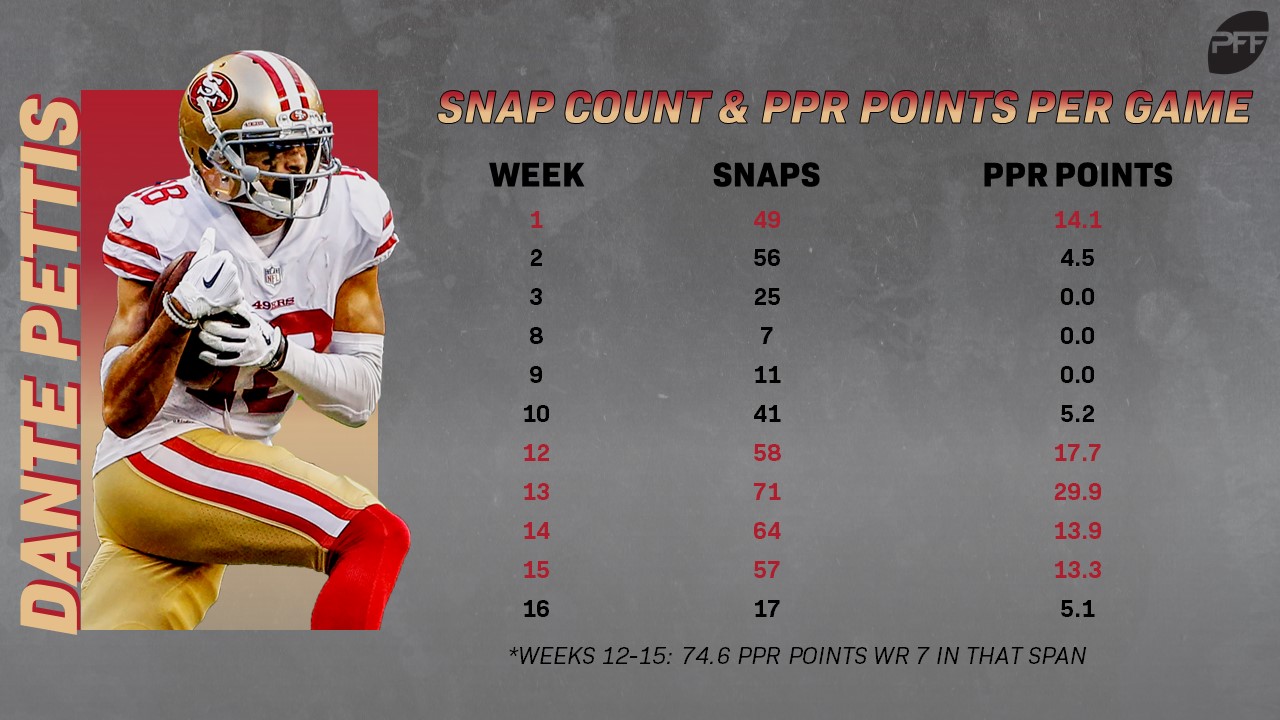 Pettis saw five targets in Week 1, scoring 14.1 fantasy points. Then he disappeared off the face off the earth (partially due to injuries), drawing just three targets over the next eight weeks. After that, in Week 10 against the Giants, he saw six targets, and continued to see at least five targets across his final five games. Excluding Week 16 (when he exited early due to injury), he averaged 15.5 fantasy points per game (would have ranked 20th-best over a full season) across his last five games of the season.

Coutee dealt with a hamstring injury that plagued him throughout last season, never going more than two weeks without missing a game or earning a “questionable” tag because of it. He ended the season 39th in fantasy points per game (10.5). However, this stat does him a disservice. Including the postseason, Coutee played in only five full games (games in which he played on at least 45% of the team’s snaps). Across those games, he averaged 9.4 targets per game (more than DeAndre Hopkins) and 17.2 fantasy points per game (would have ranked 13th).

Jackson spent the final six weeks of the season on the injury report. Prior to that, he averaged 13.4 fantasy points per game. That would have ranked 26th last year, well above his current ADP (WR52).

Miller averaged just 8.0 fantasy points per game in his rookie season, ranking 66th among wide receivers. However, Miller also suffered a shoulder injury in Week 3 that would later become fully dislocated “numerous” times during the course of the season. Because of that, I’m completely willing to discount his rookie season, and go back to how high I was on him before the season started.

Enunwa first injured his ankle during a Week 6 game against the Colts. He would ultimately play five more games before returning to IR (due to that same ankle injury) in Week 15. Across those first five games, he averaged 8.2 targets and 11.0 fantasy points per game, well above his full-season averages (6.2 targets, 8.1 fantasy points).

Howard missed six games last season, but also left Week 4 early due to injury. If we exclude that game, Howard jumps from 12.1 fantasy points per game to 13.4, which would have ranked fifth-best last season.

Olsen totals just 482 yards over the past two seasons, spending 19 games inactive or on the injury report. Prior to that, he posted three consecutive 1,000-yard seasons and five consecutive top-seven fantasy finishes. If he can stay healthy this season, even at age 34, he might be one of the top values in 2019 fantasy drafts (TE19).