With another week behind us, and some more fresh stats to analyze, I’m here to help you with your toughest fantasy football start/sit decisions of the week for Week 4.

Last season, Mack averaged 23.9 fantasy points per game when Indianapolis won by 14 or more points (would have ranked fourth-best). In all other games, he averaged 9.0 fantasy points per game (would have ranked 46th). Indianapolis probably doesn’t win by 14 points this week, but they are 7.0-point favorites and we know Mack excels in blowouts and games with good gamescript. That makes him a borderline RB1 this week.

Yes, Adams was probably a poor pick at ADP, but if you drafted him you probably have little choice but to keep starting him. And, actually, I’d bet on a big bounce-back performance this week. Philadelphia has given up the second-most fantasy points per game to outside wide receivers this season, after giving up the most in 2018 and 2017. 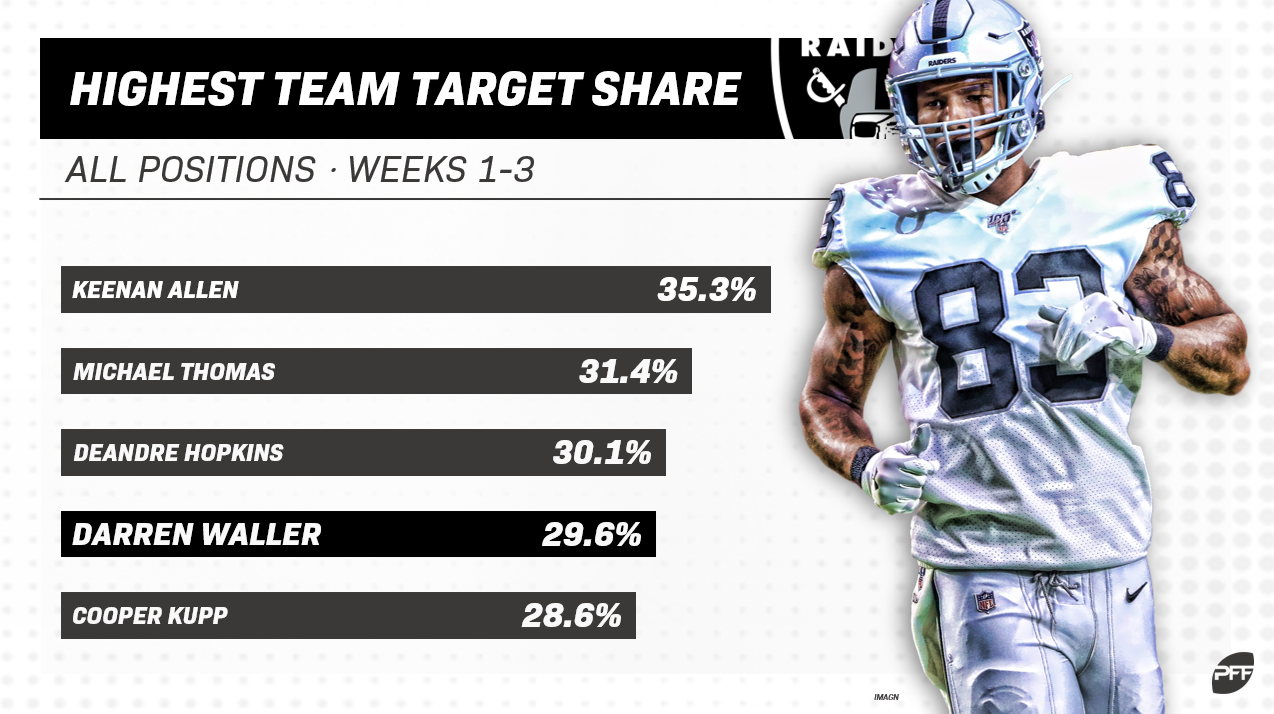 Waller ranks fourth among all receivers in target share (30%), while running a route on 86% of Oakland’s dropbacks (second-most among tight ends). Start him this week as a top-five tight end against an Indianapolis defense ranking bottom-six in fantasy points allowed to the position for the second consecutive season.

Conner has been one of fantasy’s biggest busts, but he has seen good volume, drawing 34 of the team’s 43 carries (76%) and 12 of the team’s 15 targets out of the backfield (80%), and despite missing time due to injury. Expect a big bounceback game this week, against a Bengals defense that is now ranking bottom-three in fantasy points allowed to running backs for the third consecutive season.

Through the first two weeks of the season, Jones played on 60% of the team’s snaps. In Week 3, that fell to just 39%. Jones was spelled by Jamaal Williams at the behest of head coach Matt LaFleur, and I’d expect a near-even committee moving forward. That makes things especially tricky this week, in a brutal matchup against a Philadelphia Eagles defense that has ranked top-five in fantasy points allowed to the position in back-to-back seasons.

After a monstrous Week 1 (46.8 fantasy points) in a tough matchup, and good volume in his other two games (21 targets), Watkins isn’t a “sit,” but he is someone I'm expecting to disappoint this week. He’ll draw coverage from top shadow cornerback Darius Slay (assuming Slay is healthy) for the near-entirety of the game (including slot routes), bumping him down to fringe-WR1 status this week. With Travis Kelce also in a tougher-than-average matchup, this makes Mecole Hardman and Demarcus Robinson both worthy of starts this week.

Like Watkins, Robinson also has a brutal matchup, against Xavier Rhodes in shadow coverage. Rhodes has held Julio Jones and Davante Adams to a combined 85 yards in shadow coverage this year. Given the tough matchup, along with Mitchell Trubisky’s struggles (he’s our 36th-highest-graded quarterback this year), I’d consider benching Robinson in shallow leagues.

Dissly has played in just five full games throughout his career. In those games, he averages 5.0 targets, 52.6 yards, 1.0 touchdowns, and 14.9 fantasy points per game. He’s run a route on just 54 of Russell Wilson’s 119 dropbacks (45%) this year, which is just three more routes than fellow tight end Nick Vannett. However, Vannett is no longer on the team (as of Tuesday) and Dissly has a dream matchup this week, against an Arizona defense that has given up 29.3 fantasy points per game to opposing tight ends (11.0 more than the second-worst team).

Immediately following the release of C.J. Anderson, Johnson saw his snap share jump from 56% across the first two weeks of the season to 77% in Week 3. His share of the team’s backfield opportunities also jumped from 54% to 75%. With the highest over/under of the week (54.0), against a Kansas City defense yielding 6.20 yards per carry to opposing running backs (worst), expect Johnson to finally reach 50 rushing yards and do a good deal more damage than that.

Samuel led the team in targets last week with seven, catching five for 53 yards and a score. Kyle Allen, starting in place of Cam Newton, might actually be an upgrade for Samuel, who is already one of the league’s elite separators. Allen under center should mean fewer QB runs, more target volume, and more accurate targets. Samuel also has a top cornerback matchup this week, against a Houston Texans defense that is giving up the fourth-most fantasy points per game to opposing outside wide receivers.

Through the first two weeks of the season, Damien Williams saw high-end RB2 volume, drawing 22 carries, 11 targets, and the bulk of the team's running back opportunities inside the red zone. Last week, LeSean McCoy scored 23.0 fantasy points on eight carries and three targets before exiting early due to injury. Darrel Williams picked up the slack in his absence, turning nine carries and five targets into 109 yards of offense. If Damien Williams plays, I’d start him as a low-end RB2, while ranking McCoy as a mid-range RB3. If Damien Williams is out, I’d still keep Darrel on the bench, and start McCoy as a mid-range RB2. If both running backs are out, fire up Darrel Williams as a high-end RB2.

Brown is averaging 7.7 targets per game and has reached at least 50 yards in every game, but I'd expect that streak to end this week against Stephon Gilmore in shadow coverage. Gilmore has held every receiver he’s covered to under 50 yards receiving in each of his last nine shadow games. 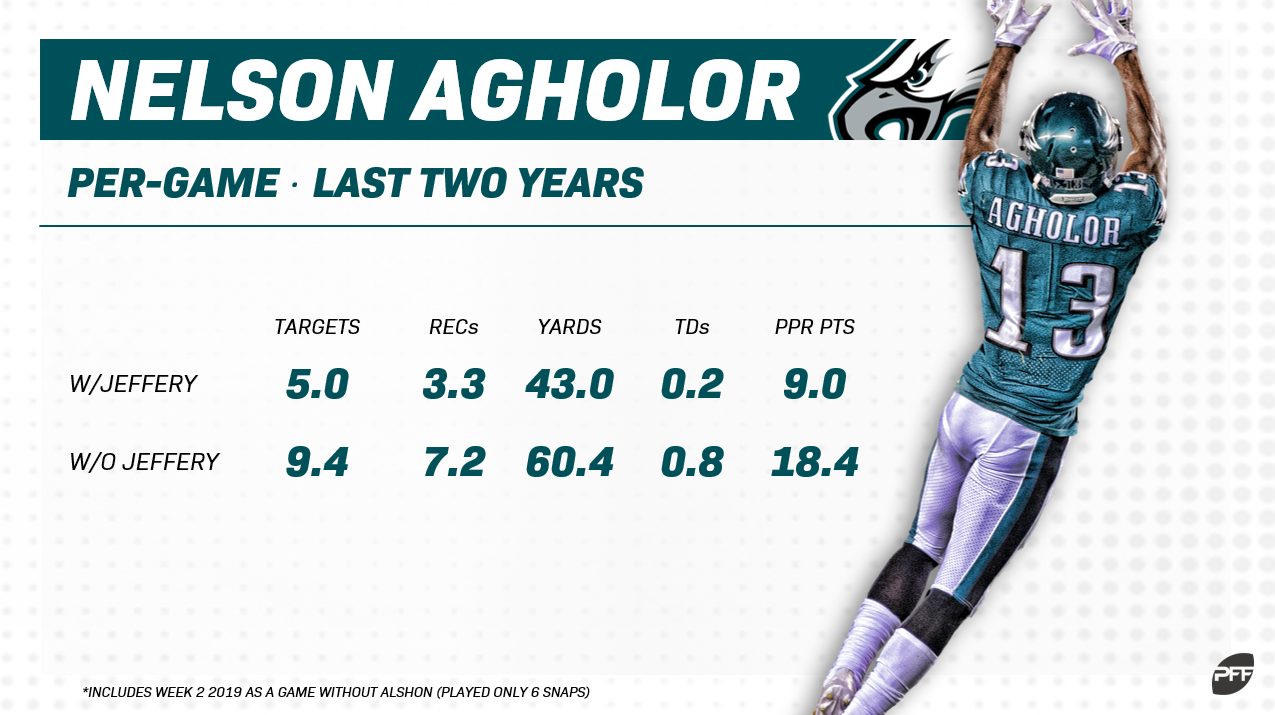 Alshon Jeffery played on just six snaps in Week 2. If we count that as a missed game, Agholor now averages 16.4 XFP per game Jeffery has missed, and only 9.2 XFP per game when he’s been on the field. For perspective, that’s the difference between ranking eighth-best at the position this year and 62nd. With Jeffery expected back this week, Agholor is an especially easy fade up against a Green Bay defense allowing the fewest fantasy points to opposing slot wide receivers.

Allen was held to just 13.7 fantasy points in his only other game against New England and will likely post a similarly underwhelming score this week. New England ranks as our No. 1-graded defense, ranking best in pass coverage grade and eighth-best in pass-rush grade.

Dorsett leads the Patriots in fantasy points per game (17.0) but ranks just 66th among all wide receivers in XFP per game (8.8). Because his volume hasn’t been nearly as good as his production implies, I wouldn’t trust him yet as a fantasy starter, unless Julian Edelman sits out. Further, this week’s matchup is especially tough for Dorsett. 75% of his fantasy production has come on targets traveling 15 or more yards through the air. Buffalo ranks best in fantasy points allowed per game and fantasy points allowed per target to wide receivers on all such targets over the past two seasons.

Williams was one of my biggest fades of the offseason, and still isn’t someone I’d be particularly excited to roster. However, he is worth a start this week if you own him. No other player has had worse luck in the touchdown department than Williams and his zero touchdowns on a 1.48 touchdown expectation. He’s bound to regress in this department (just as he was last year in the opposite direction), and should continue to be one of the team’s top red-zone options with Hunter Henry out of the lineup. I’m betting on a big game this week, against Miami’s porous secondary and with the highest implied point total of any team this week (30.5).

In 234 career games, Eli Manning has scored over 33.0 fantasy points once. In one career start, Jones has scored over 33.0 fantasy points once. Jones was one of the league’s most efficient quarterbacks this preseason, and put together a stellar performance in his first career start. I’ll be ranking him as a borderline QB1 this week, in a dream matchup at home against the Redskins. Washington ranks third-worst in opposing passer rating (122.2), third-worst in pressure rate (27%), and fifth-worst in fantasy points per game allowed to opposing quarterbacks (24.7).

Last week Gallman played on 100% of the snaps Saquon Barkley missed due to injury. He received just five carries and one target, but in a game New York trailed throughout. Head coach Pat Shurmur has historically favored a bell cow approach at the position, and the matchup is solid. Gallman is no Barkley, but he’s a fine volume-play this week as a low-end RB2.

Among all wide receivers, Williams ranks 16th in XFP per game (10.8), 10th in air yards per game (114.3), and first in end-zone targets per game (1.67). He's been woefully inefficient, and will likely continue to be inefficient all year, but volume should remain strong with Josh Rosen now under center. This preseason, Williams comprised a team-high 26% of Rosen’s attempts and 30% of his passing yards. With Casey Hayward likely to shadow DeVante Parker, leaving Brandon Facyson on Williams, you can do a lot worse than Williams if desperate for a flex play.