The effect of shadow coverage on fantasy football

One of the biggest fantasy football edges to be gained in NFL DFS can be had by paying careful attention to a wide receiver’s cornerback matchup. This isn’t something that typically factors into DFS pricing (at least not to the degree that it should). At PFF, we have you covered with Jeff Ratcliffe’s WR/CB Matchup Chart and Shadow Matrix.

Using our 2018 Shadow Matrix, the most frequently shadowed wide receiver last year was DeAndre Hopkins (10 shadow games) and the cornerback most frequently in shadow coverage was Stephon Gilmore (13 shadow games). Right behind Gilmore was Carolina’s James Bradberry with 12 shadow games (tied with three other cornerbacks). For a player like Hopkins, whether you’re being shadowed by Gilmore or Bradberry will mark a dramatic difference in how many points we’re projecting in a given week. For instance, out of 77 qualifying cornerbacks last season, Gilmore ranked fourth-best in yards allowed per route in coverage, while Bradberry ranked 18th-worst.

Today, I want to take a deeper look into the numbers to determine which shadow cornerbacks we should be most fearful of next season. In this exercise I’m contrasting a cornerback’s average yards allowed per route in coverage (in shadow games) with his expected yards allowed per route in coverage (based on the yards per route run average of all wide receivers they’ve faced in shadow coverage) over the past two seasons. By contrasting these two numbers to create a differential, we can see which cornerbacks we should be most cautious of playing against in fantasy.

Note 2: Yards per route run was chose over any other metric for its superior stability year-over-year.

The impact of shadow corners 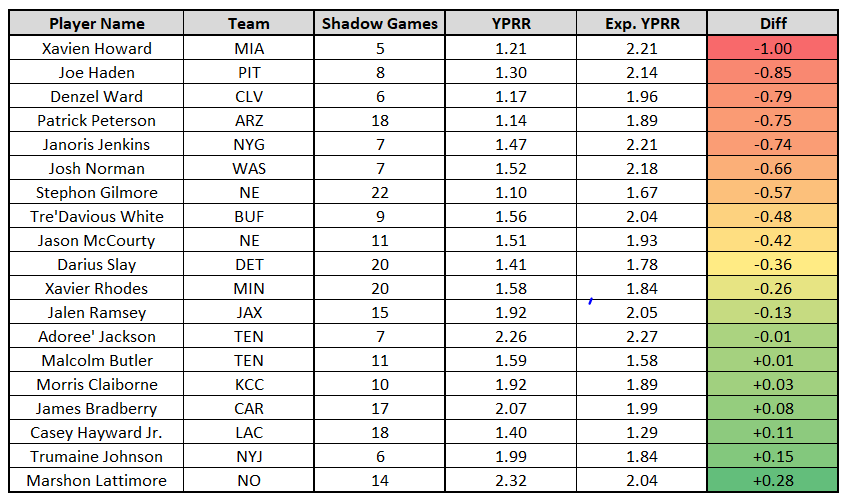 Xavien Howard tops our chart, holding Hopkins, Julio Jones, Brandin Cooks, Amari Cooper, and Robby Anderson to just 151 yards on 125 routes over the past two seasons. This is a small sample, but Miami apparently saw enough from the 26-year-old to make him the highest-paid cornerback in NFL history this past offseason. He also ranked as our 19th-highest-graded cornerback last year.

Similarly to Howard, Denzel Ward is another exciting young cornerback who produced at an elite level last year. In 2018, as a 21-year-old rookie, Ward ranked 15th in PFF grade and held every wide receiver he shadowed (including Antonio Brown and Keenan Allen) under 50 yards receiving.

Patrick Peterson isn’t just one of the league’s most fearsome shadow cornerbacks from a DFS perspective, but he also might just be the best cornerback in the game. Over the past four seasons he’s ranked eighth, sixth, 12th, and sixth in PFF grade. Despite routinely shadowing the league’s best wide receivers, over this span, he’s also ranked second, fourth, 15th, and first in yards allowed per route in coverage (of more than 110 qualifiers in each season). No other shadow cornerback has been anywhere near as consistent.

New England cornerbacks Gilmore and Jason McCourty both rank highly overall, and both should again shadow in the majority of New England’s games this year (just as they have in each of the past two years). McCourty specifically had an interesting write-up in this space last year. I wrote:

“It appears McCourty will be a good fit for [New England’s] defense, potentially an upgrade over (Malcolm) Butler, and a massive steal for Bill Belichick, who gave up just a sixth-round pick to acquire McCourty and a seventh two weeks ago. Butler, who left for Tennessee, struggled in shadow coverage by comparison.”

Last season, McCourty ranked as our sixth-highest-graded cornerback and was the single highest-graded defender in Super Bowl LIII. Butler, meanwhile, ranked 57th in PFF grade and eighth-worst (of 94 qualifiers) in yards allowed per route in coverage.

At the bottom of our chart, we have a list of cornerbacks we should potentially look to target (rather than avoid) for DFS in 2019. Surprisingly, Marshon Lattimore appears to be the most attractive option. Lattimore ranked 25th in PFF grade last year and eighth in 2017, with strong rankings in yards allowed per route in coverage in both seasons. However, he clearly struggled in shadow situations. He surrendered over 75 receiving yards in six of his 14 shadow games over the past two seasons, including three games with over 130 receiving yards (to Jones, Mike Evans, and Brown). I’m not really sure what to do with Lattimore in 2019, but I do feel a bit more confident in the notion of targeting Trumaine Johnson, Casey Hayward, or Bradberry for DFS. Johnson, for instance, has shadowed six times over the past two seasons, surrendering at least 50 receiving yards in each of those games.

In the chart below, we’ll be following the same process outlined above, only this time the focus will be on wide receiver performance (rather than cornerback performance) in shadow games. 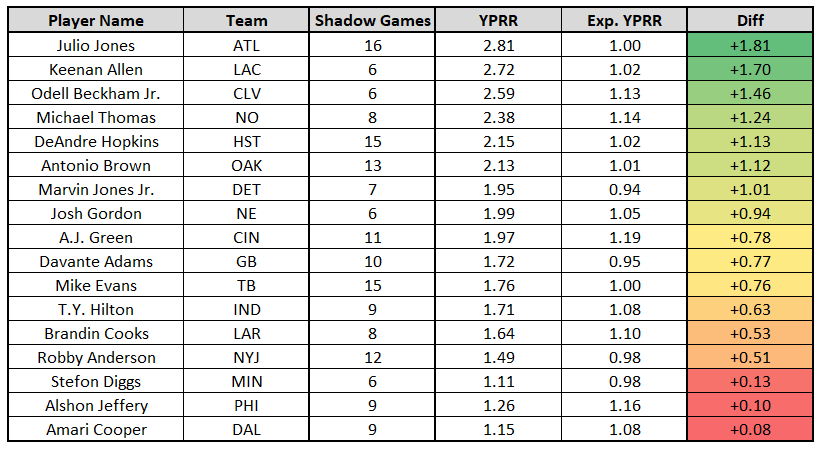 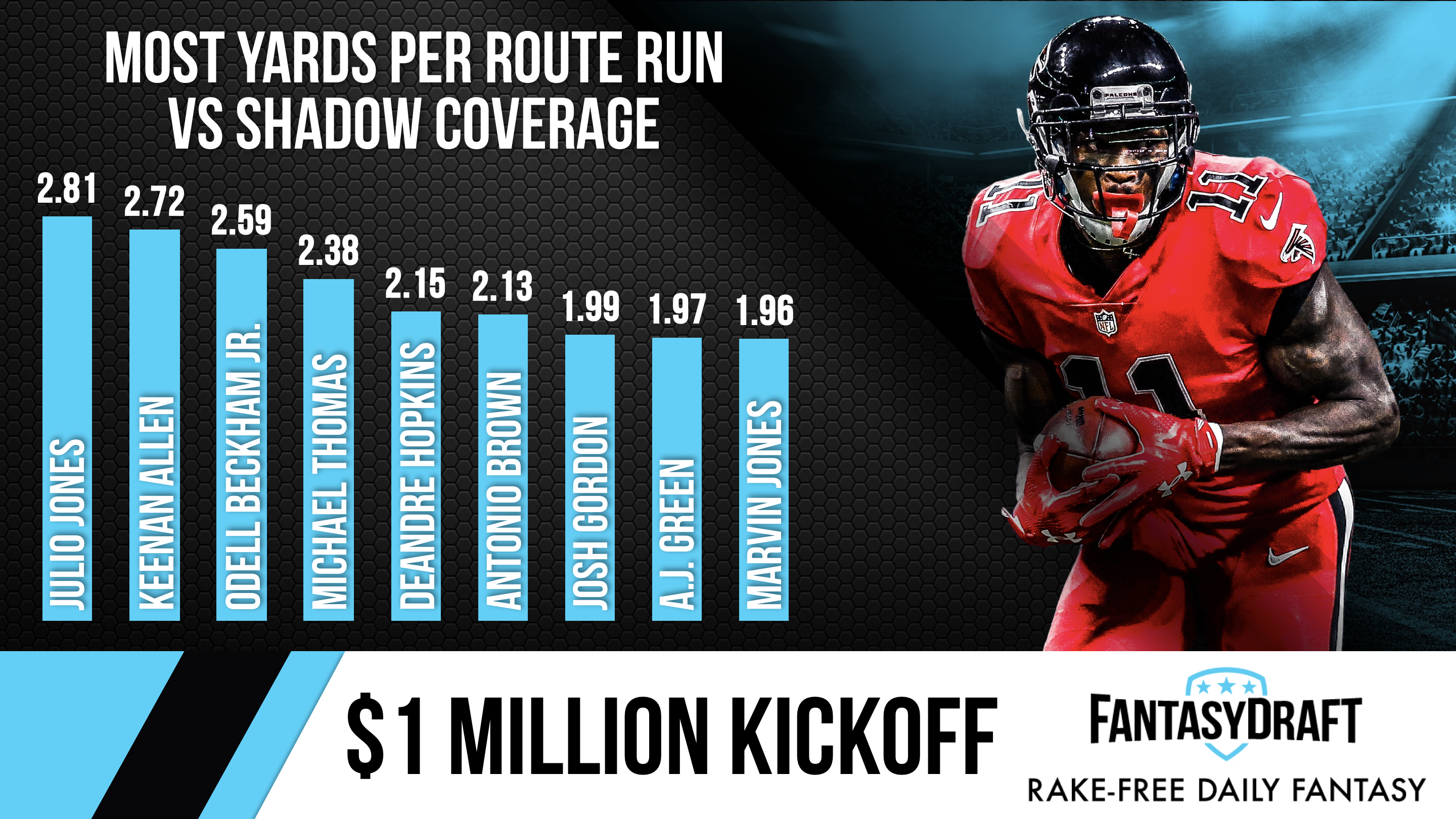 At the top of the chart, unsurprisingly, we basically see a list of the league’s top wide receivers. Somehow, Jones — the unrivaled yards per route run king — averages 2.81 yards per route run in shadow situations over the past two seasons. Last season, Jones led the position in yards per route run with 2.93. Michael Thomas ranked second with 2.66 — below Jones' shadow average.

Marvin Jones might be the most-surprising name at the top of the chart, but he’s been consistently great in shadow games over the past two seasons. Kenny Golladay is currently being drafted as Detroit’s WR1, five rounds ahead of Jones. If opposing defenses start treating Golladay as the team’s WR1, that should help Marvin Jones (drawing the lesser cornerback) immensely in both volume and efficiency. He’s a screaming value at current ADP (Round 9, WR42).

On the lower end of the spectrum, Cooks stands out as someone who has comparatively struggled in shadow situations. As I’ve detailed elsewhere, Cooks is extremely cornerback-sensitive, and especially so when considering the speed of the opposing cornerback, rather than cornerback quality.

Anderson has also struggled in shadow situations over the past two seasons. In light of his cornerback schedule this year — which easily looks like the toughest in the league — it’s worth bumping him down in your rankings.

Stefon Diggs was another surprising name. While you shouldn’t be benching him in redraft leagues when up against a shadow cornerback, you should probably look to avoid him in DFS. And, maybe, you should look to prioritize Adam Thielen instead. If Diggs is in an especially difficult matchup and typically underwhelms in those situations, it should follow that Thielen then will be more heavily relied upon.

Cooper ranks worst in this chart, and that might be surprising to some, but, to me, it’s the least surprising factoid from this article. Cooper has the uncanny ability of turning invisible whenever playing against top-tier cornerbacks. Over the past two seasons, Cooper has as many games (seven) with 80-plus receiving yards as he does games of 10 or fewer receiving yards. (For perspective, in twice as many career games, Julio Jones has been held under 10 yards just twice.) This has played a role in making him the single most inconsistent player in all of fantasy.