Predicting fantasy football is an extremely difficult task — the number of variables one can look at is almost unlimited. Typically, when building projections, the starting place is team tendencies or, better yet, coaching tendencies. That’s what we’ll be looking at today.

Expected fantasy points measures a player’s volume in terms of fantasy points and was chosen over actual fantasy points to better help divorce a coach’s player or roster talent with positional usage. This is still a noisy and imperfect exercise, but I’ll do my best to sort through that noise in the analysis below. 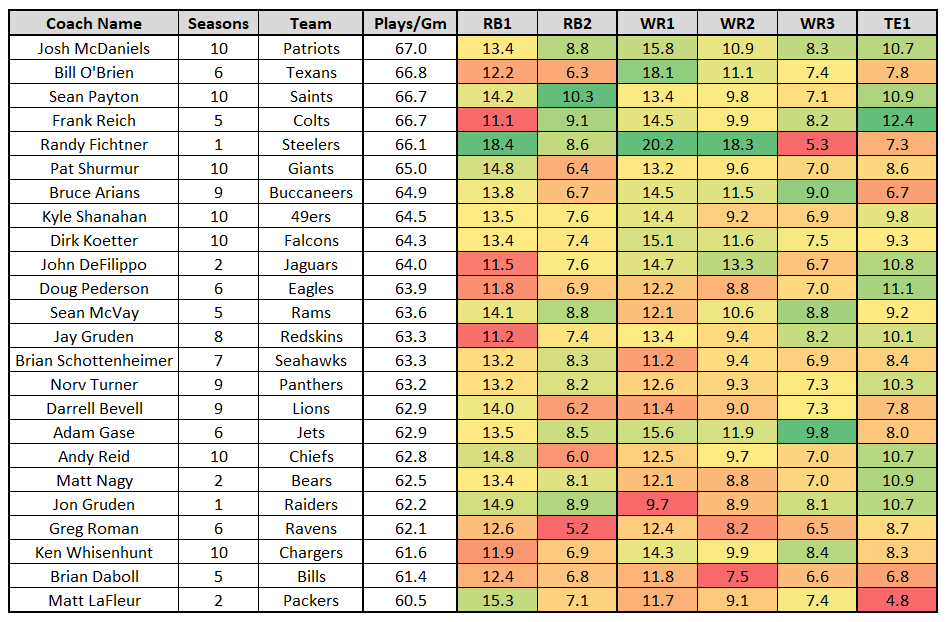 The above table breaks down each active playcaller by average expected fantasy points scored per game at each position throughout a playcaller’s historical sample. Each positional grouping (e.g. WR1 vs. WR2 vs. WR3) is split by expected fantasy points per game over the course of a full season. In instances where a higher-ranking player (e.g. RB1) missed time with an injury, the next-closest player (e.g. RB2) would assume that designation in the interim.

For each of the 16 NFC playcallers listed below, I’ll try to highlight a few key stats from this chart (and the chart from our AFC article) and focus in on the most important fantasy-relevant takeaways:

Kingsbury has never called plays at the NFL level, but based on his history in college we should know what to expect — a fast-paced and high-powered offensive attack. David Johnson is now an easy top-five pick, going from a team that ranked dead-last in gamescript-adjusted pace of play to Kingsbury, who also targeted his running backs at one of the highest rates in the NCAA.

Kingsbury also seems to be a perfect fit for rookie quarterback Kyler Murray. Last season, Murray totaled the most passing yards and most passing touchdowns ever of any Division I quarterback with at least 1,000 rushing yards. In 2012, with Kingsbury as his offensive coordinator, Johnny Manziel totaled 510.2 fantasy points, the fifth-most by any Division I quarterback since 2000. In 2013, after Kingsbury left, Manziel saw a massive reduction in fantasy points (429.5), rushing production (1,410 to 759), and rushing efficiency (7.0 yards per carry to 5.3).

Koetter returning to Atlanta should be good news for the team’s top two wideouts. Julio Jones finished second and fifth in fantasy points per game in Koetter’s last two seasons in Atlanta. Calvin Ridley should also be better off. He averaged 5.8 targets per game last year and ranked fifth of 82 wide receivers in fantasy points per target (2.25). Over the past seven seasons, Koetter’s WR2 has averaged 7.0 targets per game. 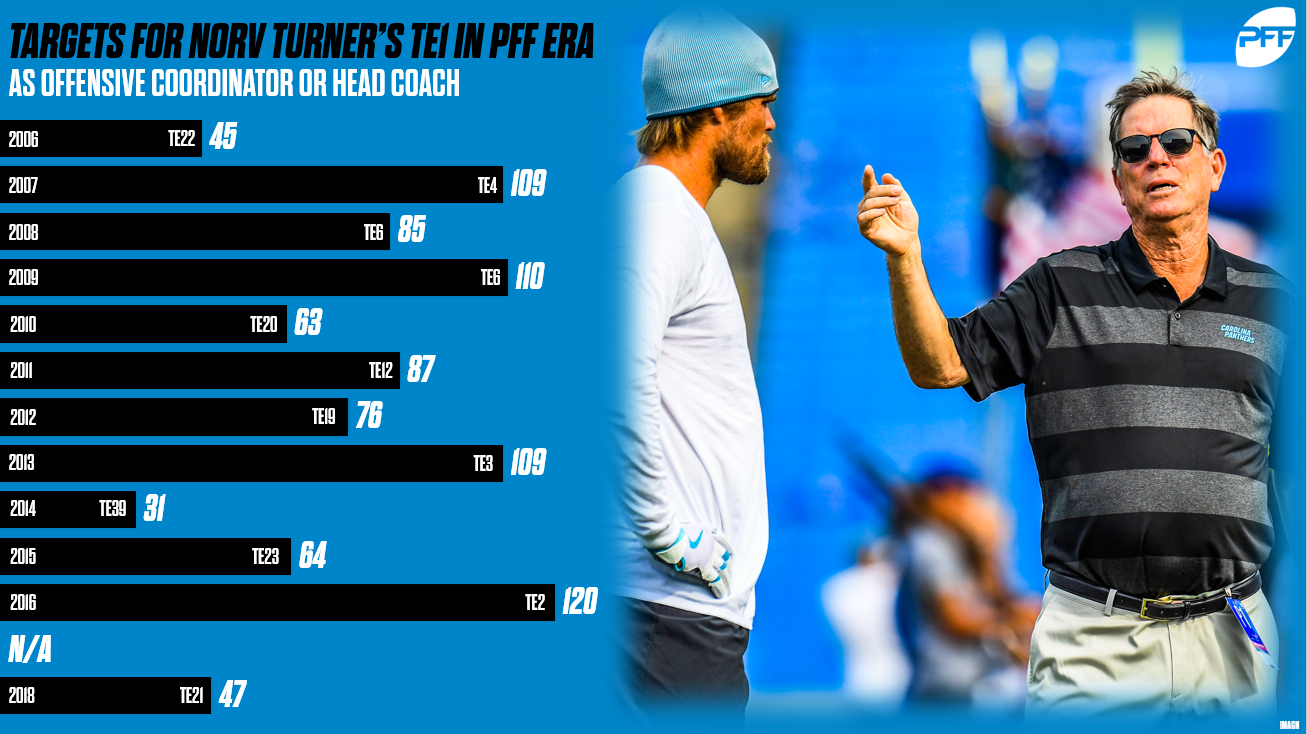 Turner had the benefit of coaching Antonio Gates for a large stretch of his career, but even after that, we saw Jordan Cameron total 118 targets in 2013 and Kyle Rudolph total 132 in 2016. This is encouraging for Greg Olsen’s potential should he stay healthy. Over the past two seasons, Olsen has spent 19 games either inactive or on the injury report, but prior to that, posted three consecutive 1,000-yard seasons and five consecutive top-seven fantasy finishes.

It’s a small Andy Reid/Travis Kelce-influenced sample size, but maybe we’re sleeping on Trey Burton at ADP (Round 14). Nagy is an Andy Reid protégé, and Burton was being drafted eight rounds higher last year for exactly that reason.

Further, though Nagy utilized a committee at the running back position last year, based on skillset, draft capital, and the decision to trade away Jordan Howard for pennies on the dollar, David Montgomery has legitimate bell cow potential in Year 1. Kareem Hunt’s usage was also far better in 2017 when Nagy was calling the team’s plays. Excluding Week 17, Hunt averaged 21.3 expected fantasy points per game in the four regular season games Nagy was the playcaller, but only 13.5 during his first 11 games when Reid was calling plays. Hunt has been a common comp for Montgomery, even before he was drafted by Chicago. And, keep in mind, Reid’s RB1 resume is the most attractive among active playcallers.

Otherwise, we shouldn’t expect anything to change in Chicago this year — meaning, their passing offense still isn’t very enticing for fantasy. Last month, Nagy was quoted as saying, “I don't know who's going to have the big game. It depends on what that defense is going to give us. Everybody's live on every play. We're never going to have one guy, I don't think, receiver-wise that you see every week who has nine catches for 140 yards and two touchdowns. That's just not us.”

Moore has never called plays at the NFL level, which should be a concern. However, I’m more optimistic Moore is an improvement for the team’s fantasy potential than I am most playcallers without any NFL experience. Over the past three seasons the Cowboys have attempted the third-fewest passing attempts per game (33.7).

Dan Orlovsky was asked what the 2019 Cowboys offense might look like under Moore. He responded, “I think it’s going to be an offense that is like Sean Payton married with Matt Nagy married with Mike Leach. Like they all had a baby and that’s what this offense is going to be.” Oh boy, that’s exciting. He also added, “I would anticipate Dak (Prescott) being used as a runner more.” Of course, this is all just ­from a second-hand source, but as I have outlined, the former regime never came close to unlocking Prescott’s true Konami Code potential. He’s a massive value at current ADP (QB18).

As the stats imply, we should expect a run-heavy approach from Detroit in 2019. Bevell’s history suggests Johnson should take a significant step forward this year, but maybe at the expense of Matthew Stafford and his pass-catchers.

Per ESPN beat writer Rob Demovsky, “There's going to be an adjustment period for Aaron Rodgers in Matt LaFleur's offense, which, by the way, is going to be more run-heavy than any offense Rodgers has played in before with Green Bay.” LaFleur’s history backs this up and means we should temper expectations a bit for Rodgers and Green Bay’s passing offense this year.

Though Los Angeles retains their wunderkind playcaller in McVay, we could see some key changes to their offense this year. First, due to health-related issues, Todd Gurley is likely to see a significant decline in workload. Second, there are reports that the Rams are going to play in 12 personnel more frequently in 2019. That could make Gerald Everett more intriguing, while dinging Cooper Kupp (their slot wide receiver and likely odd man out in 2TE sets).

Outside of a three-game stint as the team’s interim offensive coordinator last year, Stefanski has never called plays at the NFL. The more noteworthy hiring, to me, was Gary Kubiak as the team’s assistant head coach and offensive advisor.

In 12 seasons as an offensive coordinator, Kubiak’s offense has ranked top-five in rushing yards nine times and top-12 12 times. In his last year in the league, Kubiak led the league in outside zone runs and outside zone run percentage. That should be good news for Dalvin Cook, who ranks fourth-best in yards per carry when running in outside zone over the past two seasons. He’s been one of my favorite picks in the second round of drafts.

We have a robust and consistent sample from Payton, and everything outlined above is about what we should expect from the offense as a whole in 2019. Alvin Kamara is a terrific top-three pick, and Latavius Murray should see enough volume to flirt with mid-range RB2 numbers. Michael Thomas is well worth a borderline first-round pick, though, in order to pay off his price-tag (he should), he’ll again be forced to rely on hyper-efficiency rather than elite volume to score fantasy points. If there’s one surprise from the Saints this year, I think it’s Jared Cook having vintage-era Jimmy Graham-type upside, as I have argued was a possibility. 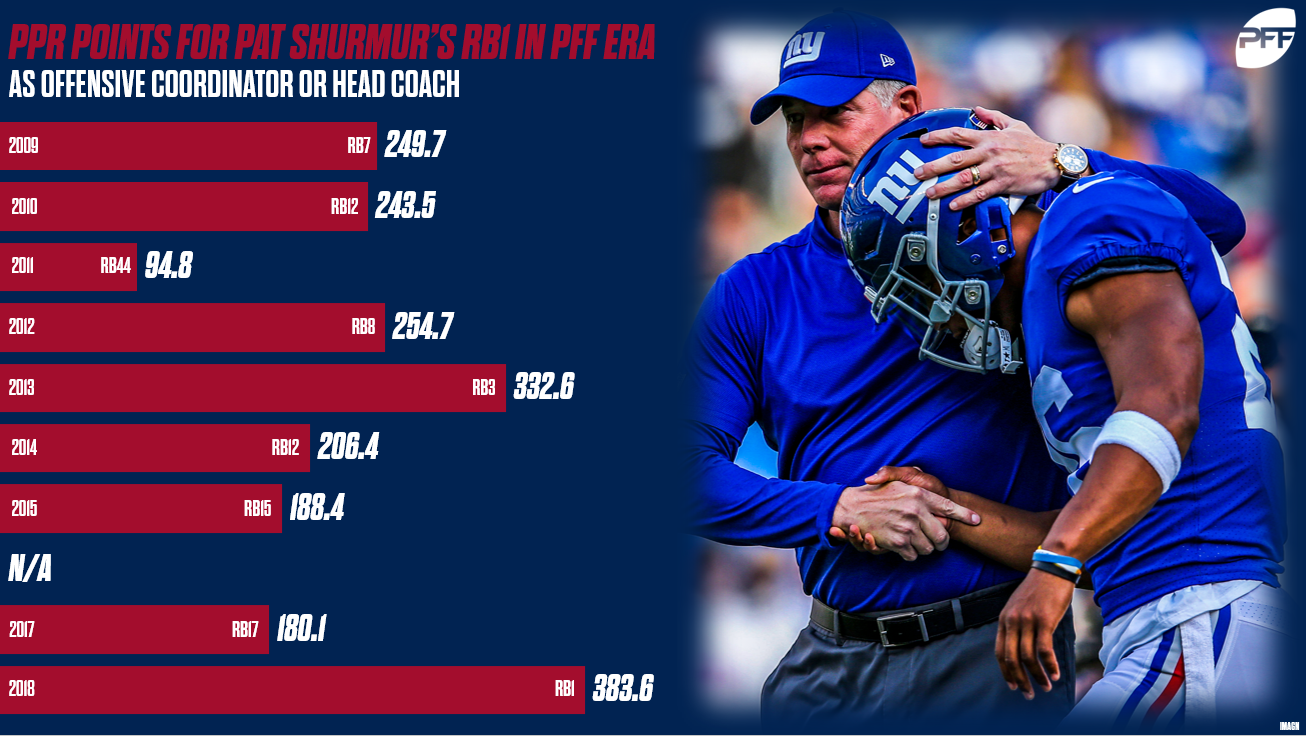 What should we expect from the Giants this year? Exactly what we saw last year and in nearly every year of Schurmur’s career — amazing volume for his primary running back, and nothing else to get too excited about beyond that.

Although Pederson’s TE1 has seen league-high volume, we should expect a decline in targets for Zach Ertz this year following a major increase in target competition. The Eagles are looking to spread the ball around a bit more, which will cap upside and make each player (though still valuable) more inconsistent on a week-to-week basis.

The major takeaway from Shanahan’s coaching history is the usage of his WR1. Across the 10 seasons preceding last year, his WR1 has averaged a whopping 140.0 targets per season (would have ranked 10th-best last year). Perhaps that means one of the team’s wide receivers are undervalued at ADP, but I think it’s more likely we should just be treating George Kittle as the team’s WR1.

Following a historically great 2018 season and the retirement of Doug Baldwin, we should expect a significant target increase for Tyler Lockett. However, Baldwin himself had never ranked top-15 in targets in any of his seasons as Seattle's WR1, and Schottenheimer’s WR1 has ranked 52nd, 57th, 54th, 38th, 30th, 30th, and 32nd in total targets over his past seven seasons. Though Lockett is still firmly one of “my guys” this year, this is no doubt worrisome.

Arians will no longer be calling his team’s plays, but this should still look an awful lot like an Arians-run offense. His history with the tight end position is disconcerting, but our analytics team isn’t worried. We should also expect good usage for both Mike Evans and Chris Godwin this season. Arians said earlier in the offseason, Godwin could be “close to a 100-catch guy” in 2019. That’s probably just typical hyperbolic coach-speak, but if true could mean we should be really treating Godwin as the team’s true WR1. In any case, Arians’ arrival should mean good volume for both wideouts.

Gruden’s historical tendencies are fairly on par with my own expectations for the team. I’m not too excited about any wide receiver — Josh Doctson led Washington wide receivers in fantasy points last year and still ranked just 66th overall. Other than that, Derrius Guice and Jordan Reed are both intriguing at ADP but have serious injury concerns.