Pro Football Focus' Top-50 Big Board for the 2019 NFL Draft is live! PFF's team of draft analysts, led by Steve Palazzolo and Mike Renner, have put together their top-50 prospects now that we're officially one day into the month of April. 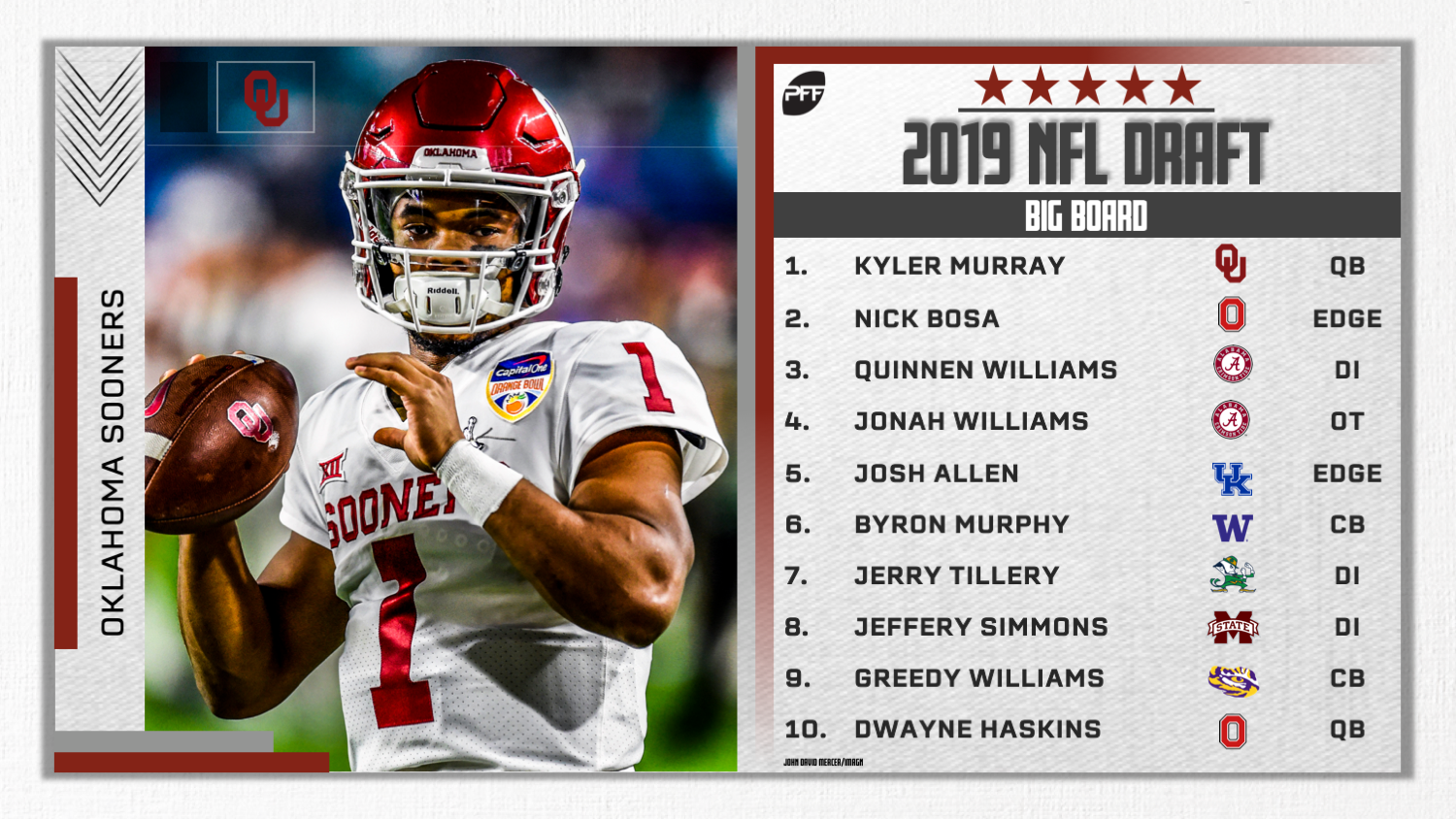 Murray was the highest-graded QB in college football this past season. We haven't seen a quarterback that is as dangerous with both his arm and legs since Russell Wilson.

Related Article: Why Kyler Murray is the top player on the PFF 2019 NFL Draft Board

Bosa had a higher pass-rush win rate as a true freshman than Brian Burns, Clelin Ferrell and Jachai Polite had this past season.

Williams earned the highest grade we've ever given to a college interior defender (96.0) in his lone season as a starter at Alabama.

The Alabama left tackle was the second highest-graded tackle in the nation despite facing stout SEC competition and allowed only 12 pressures.

Tillery tied Quinnen Williams for the highest pass-rushing grade among interior defenders in college football. Tillery's sack totals don't tell the whole story as he was a dominant week in and week out.

Related Article: Jerry Tillery is an elite player, deserves a place in the top-10 conversation

He tore his ACL but did it so early in the process that he could still play as a rookie. Simmons had a run-defense and pass-rushing grade over 90.0 this past season.

His sophomore campaign wasn't quite as dominant as his freshman season, but he still only allowed 27 of his 74 targets to be completed. 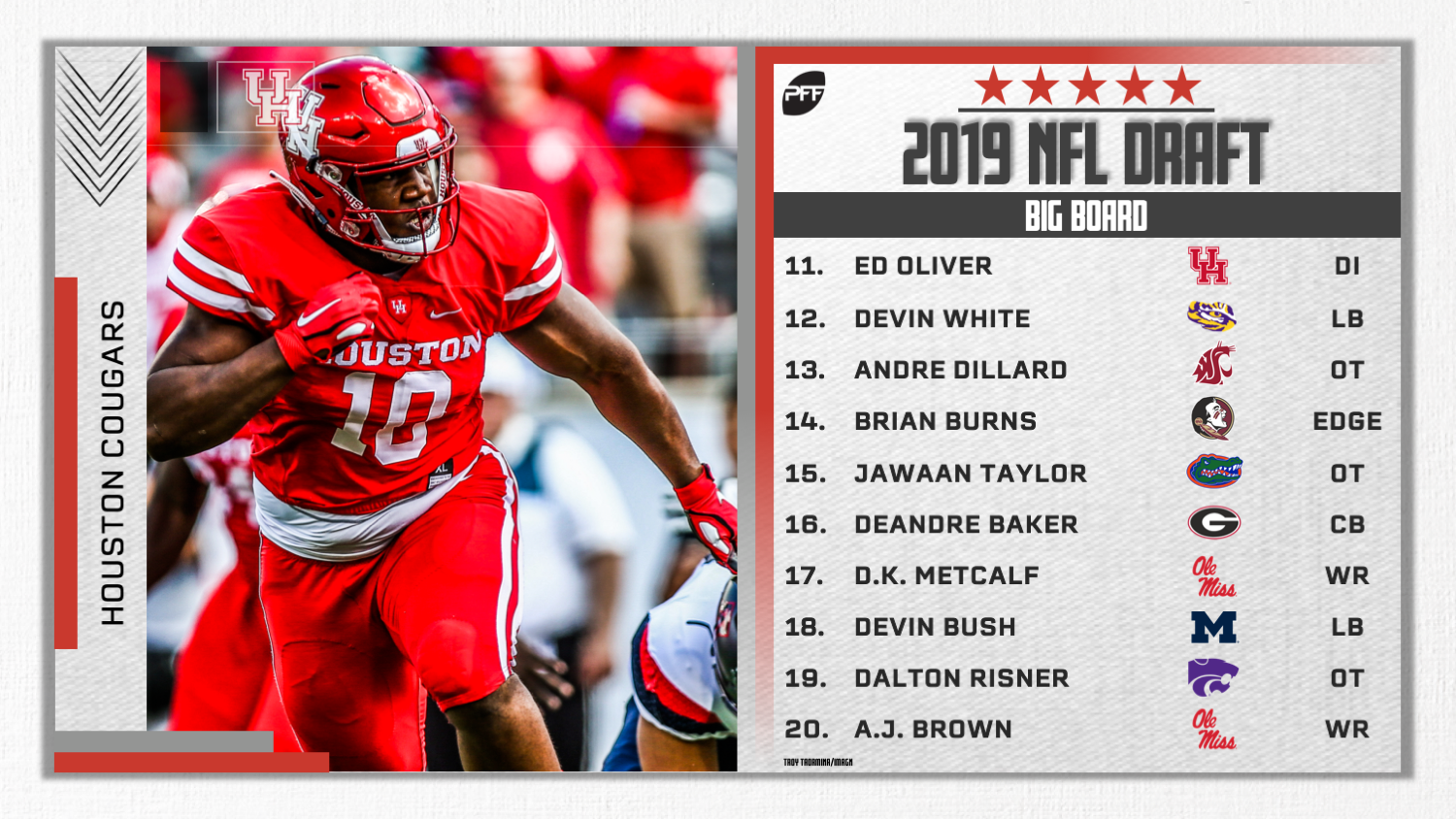 His pass-rushing finally came around with a 90.8 grade this past season, but considering his size and the competition he was facing, he still has a ways to go.

Related Article: Did the Houston scheme hold back Ed Oliver?

Dillard had the highest pass protection grade of any starting tackle in the country at 94.0 this past season.

Related Article: Brian Burns is so much more than an explosive, athletic freak; he’s a technician committed to improving

Baker has posted back-to-back 90.0-plus graded seasons in coverage. This past year, he allowed all of 10 first downs all season and no touchdowns.

Risner started all four seasons at Kansas State and his career low grade was 87.9 overall.

Brown was the definition of a complete receiver for Ole Miss. He forced 17 broken tackles, had 34 explosive plays and only dropped five passes on 90 catchable. 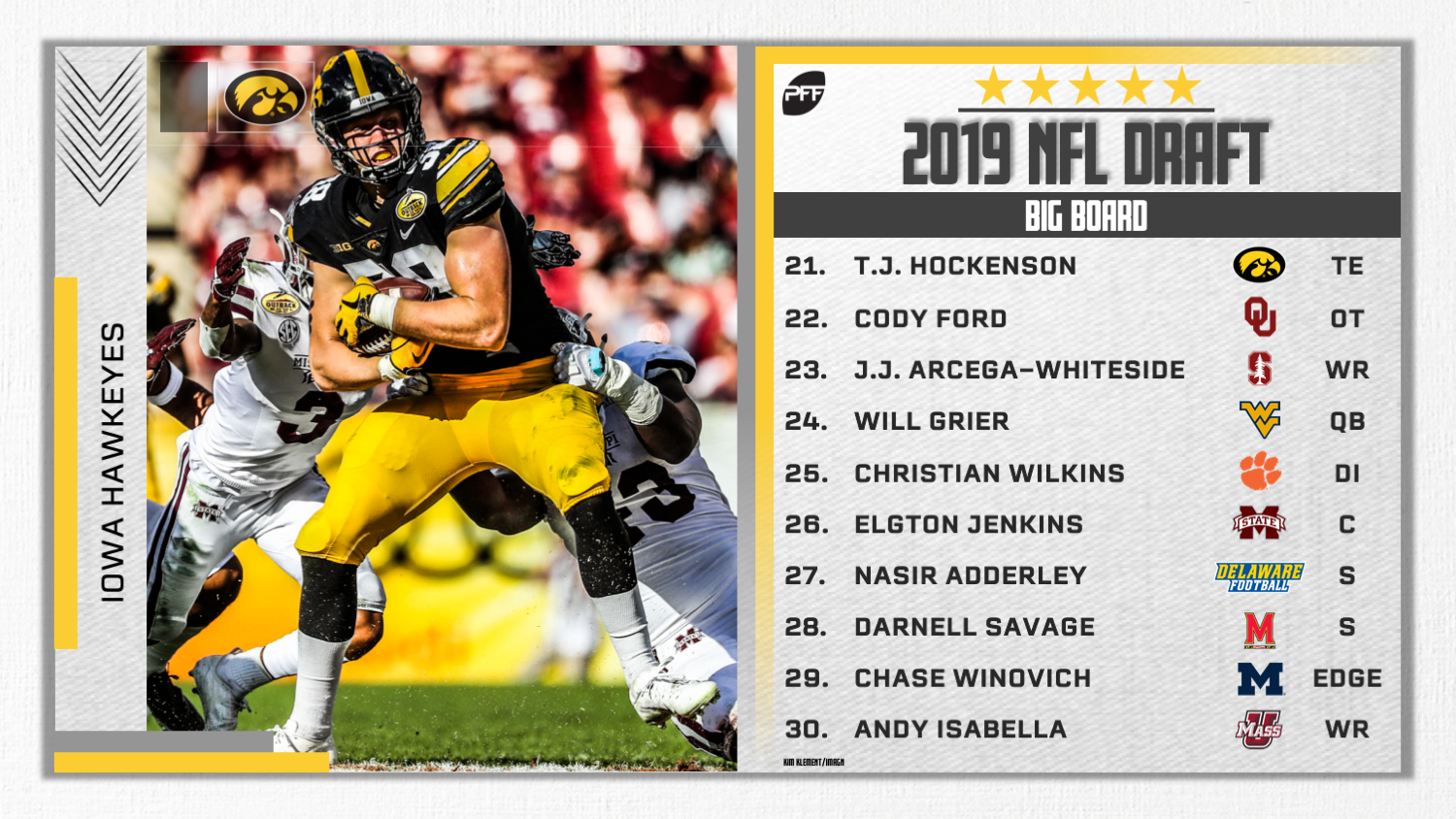 Grier tied Drew Lock for the NCAA lead with 33 big-time throws and has the second-best best passing grade behind Kyler Murray.

Adderly earned a 90.3 overall grade with Delaware a year ago, and his 89.9 2018 coverage grades leads all draft-eligible safeties.

Winovich is coming off back to back seasons with grades over 90 overall – the only such qualifying power-5 player in the draft class that can boast that.

Isabella was the highest-graded wide receiver in the country, racking up 1,696 yards, including 219 against Georgia.

Related Article: Andy Isabella is much more than a slot receiver, can ‘do it all’ 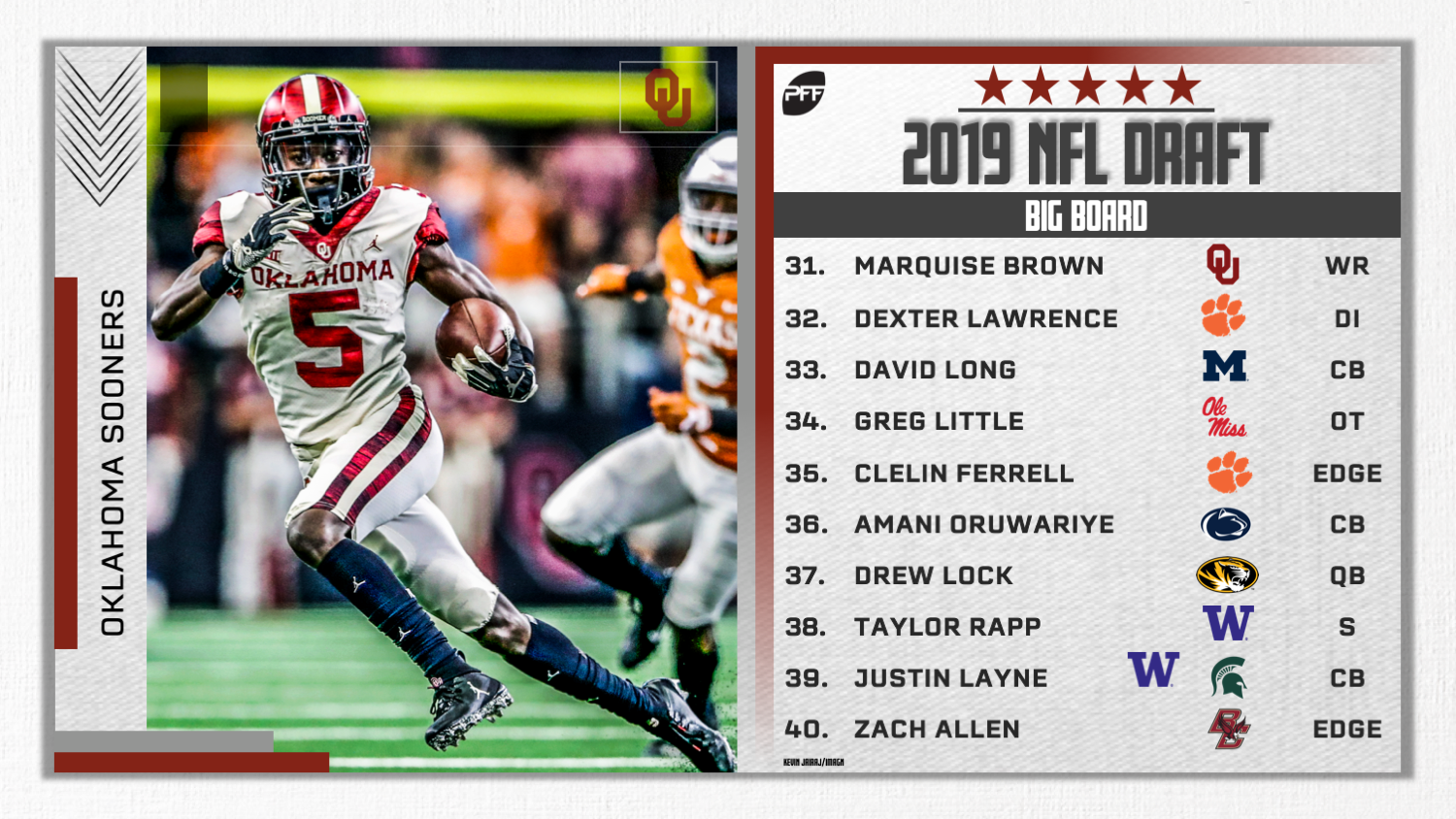 Nose tackles of 340-plus pounds are going the way of the Dodo in the NFL, but Lawrence is a pretty ridiculous athlete for his size. He had the 12th best pass-rushing grade among interior players in college football.

Over the past two seasons, Little allowed all of 26 total pressures on 993 pass-blocking snaps.

Ferrell racked up 14 sacks and 14 hits on the season and has ideal build to fit in any scheme.

Oruwariye had the best week of any corner at the Senior Bowl, notching the highest win rate among all defenders in the one-on-ones.

Lock paired an NCAA leading 33 big-time throws with only six turnover-worthy plays as a senior.

Rapp was one of the most assignment-sure safeties in the country this past season and missed all of two tackles on 56 attempts.

Layne's 89.5 coverage grade last year was ninth best among Power-5 corners in the nation. He also dabbled at receiver where he took 36 snaps this past season.

Allen was one of the best run defenders in college football in 2017 before a 90.3 pass-rushing grade this past season. He was an ironman for BC, playing 107 snaps against Wake Forest this past season.

Related Article: Zach Allen calls for NFL teams to ‘put on the tape’ to see his value, mean streak 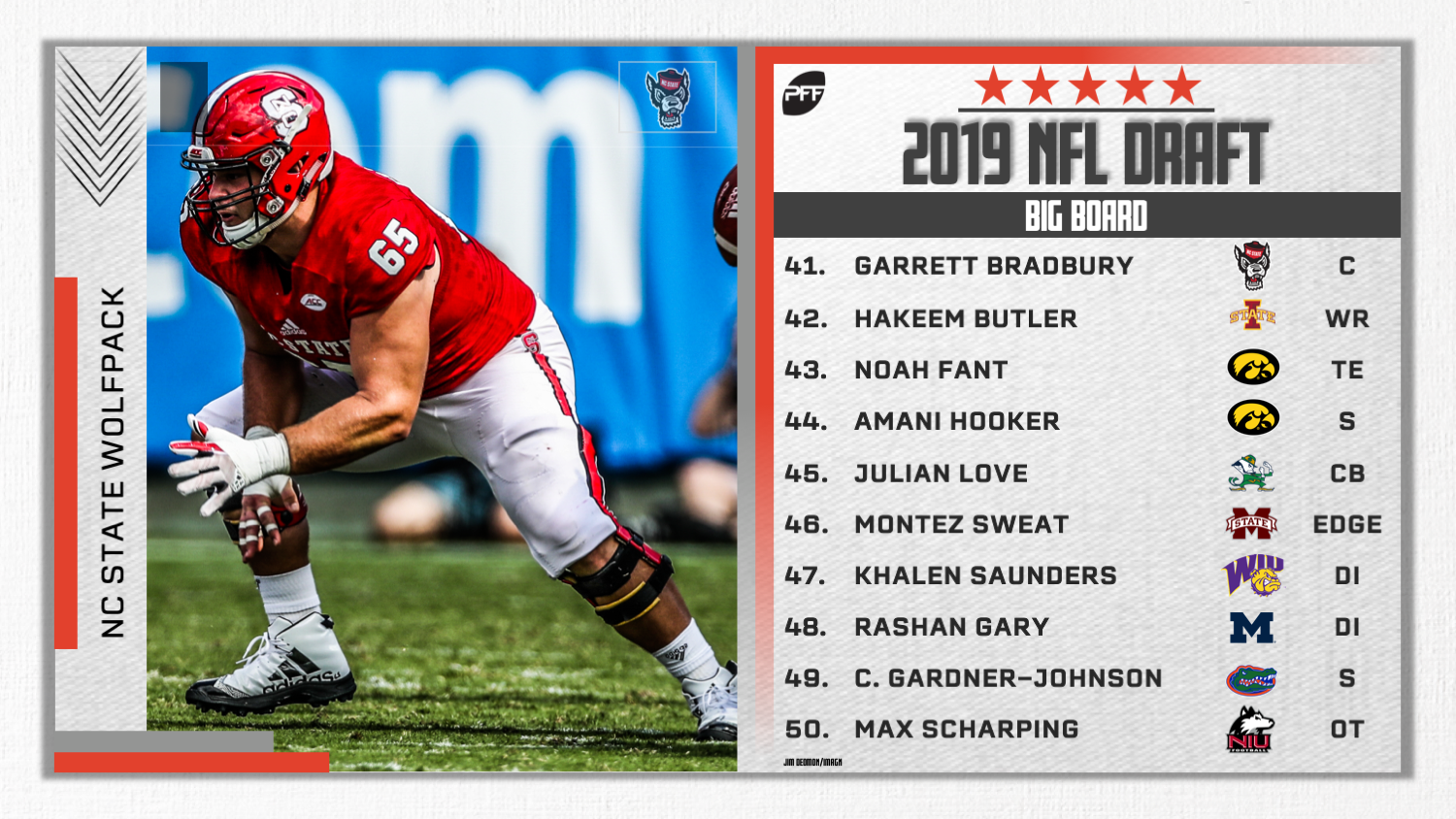 Bradbury was a top-five graded center each of the past two seasons and the highest-graded Power-5 center in this draft class both years as well.

Butler's size (6-foot-5, 227 pounds) might suggest a possession receiver, but he had more receptions 20-plus yards downfield (19) than anyone in the draft class.

Fant is the most freakishly athletic tight end in this draft class, but his inconsistent hands are still a concern. He's dropped 11 passes on 80 catchable the past two seasons.

Hooker's 91.1 coverage grade last season was the second-highest of any defensive back in the country.

Sweat's 19.1% pressure percentage was top 10 among edge defenders in the draft class and the third highest in the SEC last season.

Saunders moves like an edge and even played there at times for Western Illinois. He went to the Senior Bowl and had the second-highest win rate among interior players in the one-on-ones.

Related Article: Why Rashan Gary is not a first-round talent