The big news this week in the run-up to the 2019 NFL Draft is that Mississippi State defensive tackle Jeffery Simmons, a potential top-15 pick in April’s draft, will likely miss his rookie season in the NFL after suffering a torn ACL while training. The news will have a wide-ranging impact across the landscape of the draft, changing things for Simmons, teams in need of a standout on the defensive interior, and several other top prospects at the position.

What it means for Simmons

From a strictly on-field perspective, Simmons looked like a top prospect in this draft class and finished the 2018 campaign with the fourth-highest grade of any player on the defensive interior at 92.8. He dominated both against the run and as a pass rusher, with 34 total pressures from 339 pass-rushing snaps and 34 tackles resulting in a defensive stop.

However, the injury will hurt his draft stock and makes it unlikely that we will hear his name called on day one of the draft. That’s bad news for Simmons in the short term, but also means that a team will have the potential for a steal later in the draft. With PFF defensive grades of 90.8 and 92.8 over the past two seasons, someone is going to land a top talent in the second round or later.

If Simmons is looking for reasons for optimism, he need look no further than Dallas Cowboys linebacker Jaylon Smith. Smith suffered a devastating knee injury in Notre Dame’s bowl game at the end of the 2015 season and despite it dropping him from being a potential top-10 selection, Smith still went in the early second round. After sitting out the 2016 season, Smith saw action for the first time in 2017, before taking a huge step forward and finishing the 2018 season as our eighth-highest graded linebacker with a PFF defensive grade of 84.4. Despite the initial setback, Smith’s recent performance has him in line for a big payday soon, and the same will be true for Simmons provided he can make an impact once he recovers from the injury. 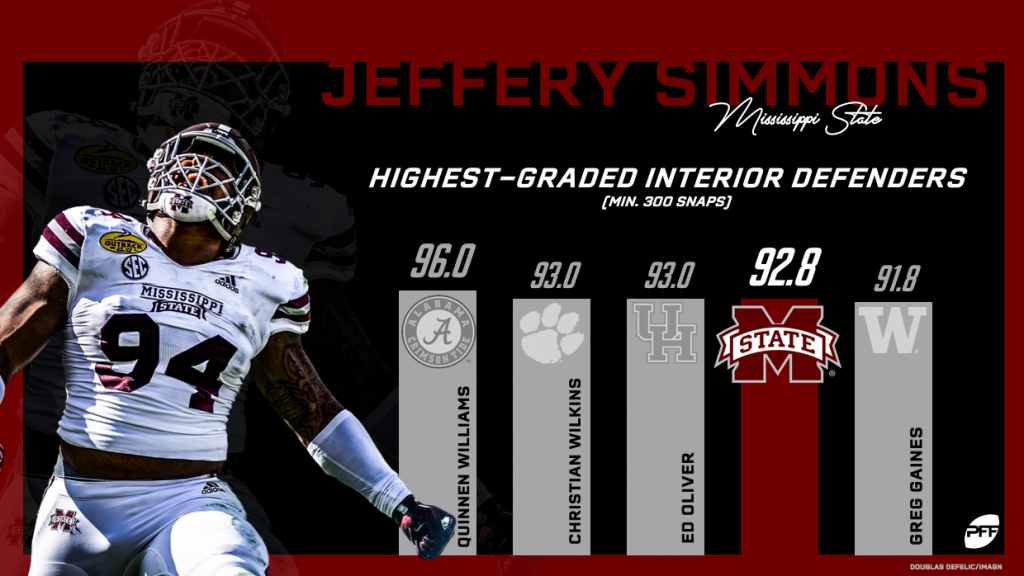 What it means for the rest of the class

This is a strong defensive interior class, with Alabama’s Quinnen Williams even in the discussion for the top overall selection in the draft. He is unlikely to be impacted by the injury to Simmons, but after him, it helps to push the rest of the class up the board, or solidify their positions.

In Mike Renner’s recent mock draft, Houston defensive tackle Ed Oliver was the second player on the defensive interior off the board, going to Atlanta at pick 14. This is a spot that we’ve seen Simmons projected in multiple mock drafts throughout the media, and the injury to Simmons helps strengthen the case for Oliver to be selected in the first 15 picks. His PFF grade has improved every season but has never been below 88.0, and while he came into the season with a big question mark on his ability as a pass rusher, he improved in that regard in 2018, producing 26 total hurries from 270 pass-rushing snaps. 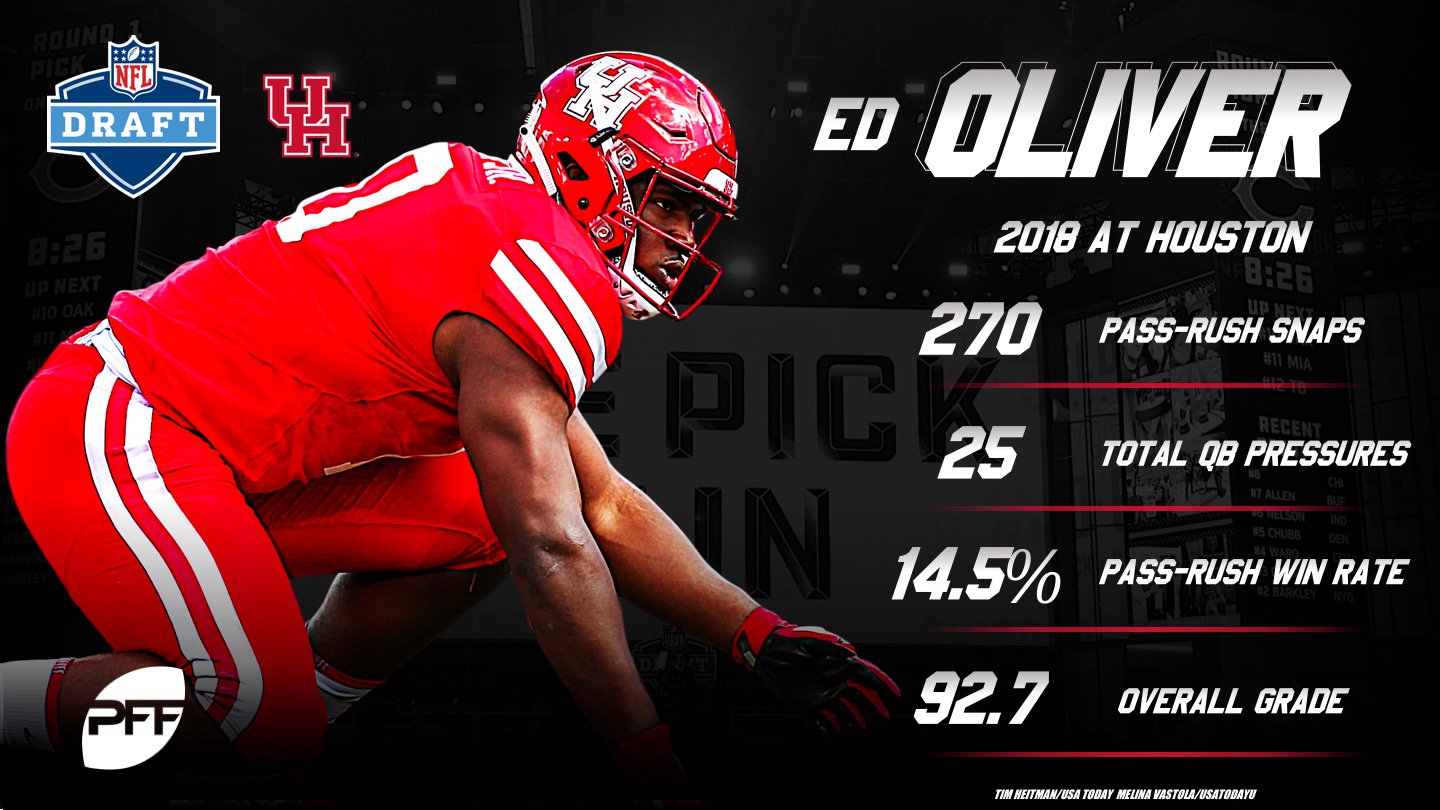 Clemson’s Christian Wilkins was the next player at the position off the board in Mike’s mock draft, going to Oakland at pick 24. After producing the best season of his career, finishing 2018 tied with Ed Oliver for the second-highest grade on the defensive interior at 93.0, Wilkins has pushed himself into the conversation for the second player at the position off the board. While the knock on him is his age, given that he will turn 24 years old as a rookie, he dominated as a pass rusher in 2018 with 47 total pressures – including eight sacks – on 361 pass-rushing snaps, something that is needed in an NFL that leans more on the passing game every season.

Next off the board in the mock draft was Notre Dame’s Jerry Tillery, who finished 2018 tied for the highest pass-rushing grade at the position with Alabama’s Williams at 92.5. Tillery is a giant of a man at 6’7” and improved each of the past two seasons, racking up eight sacks, seven hits and 33 hurries from 413 pass-rushing snaps in 2018. 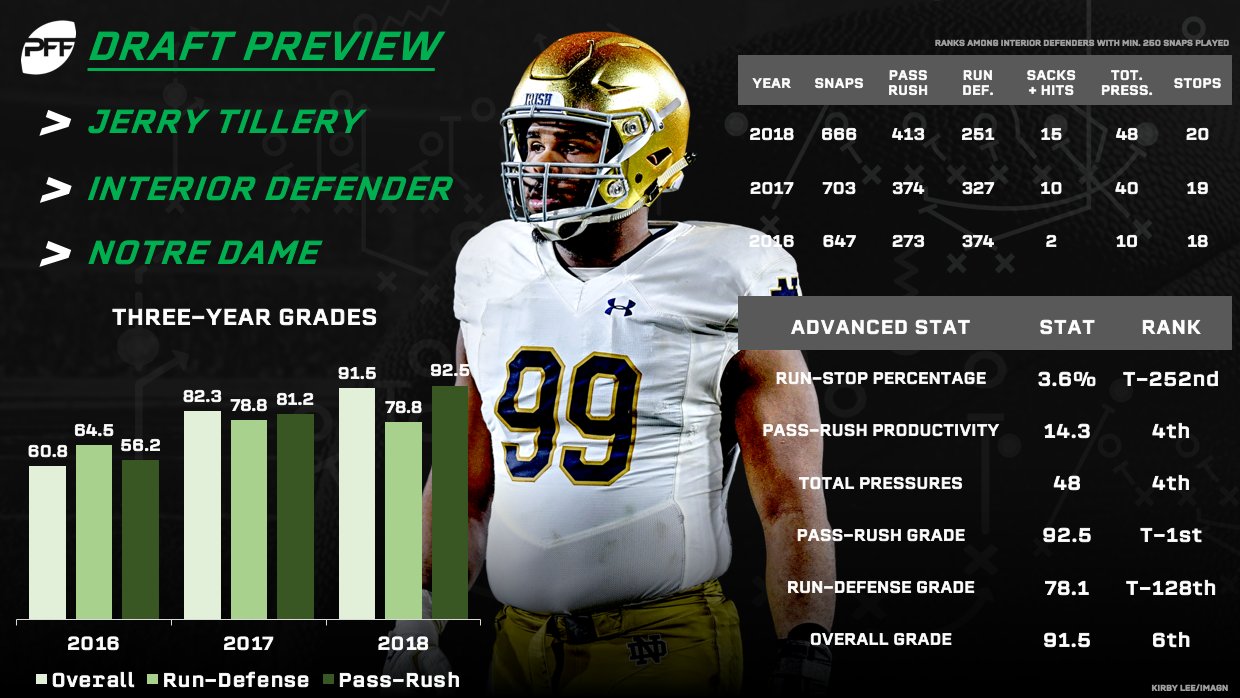 The final player at the position to come off the board in round one was Wilkins’ Clemson teammate Dexter Lawrence. While Lawrence might not be as flashy as some of the other players on the board, but he is incredibly consistent, producing PFF defensive grades of 86.6 or higher in all three of his seasons at Clemson.

Ohio State’s Dre’mont Jones didn’t make the cut in Mike’s mock draft, but he was the 24th selection in Steve Palazzolo’s latest, heading to the Raiders. Jones is a fierce pass rusher who was tied for second at the position with 52 total pressures and tied for first with 10 sacks in 2018.

What we know is that this is a draft class that is strong on the defensive interior, and the NFL has plenty of teams who could certainly do with strengthening the position. Williams is still likely to be the top player off the board at the position, but after him, all bets are off. Simmons was in the conversation to be the next one off the board, so the injury boosts the chances of that being Oliver or Wilkins instead, while later in the round it decreases the chances of Tillery, Lawrence or Jones slipping out of the round.

There’s another interesting scenario that could play out too depending on how far Simmons falls in the draft. A team could grab one of the top players at the position in round one, and double dip on the position with Simmons later in the draft to set up a dominant defensive interior down the line. This injury almost certainly causes Simmons to fall, but how far will be the key question to follow when it comes to the weekend of the draft.