Pro Football Focus' Preview Team has come together to provide every fan with the right information to best prepare and enjoy Week 15 in the NFL. We offer advanced stats on key NFL matchups, fantasy advice and a Greenline perspective for all the weekend's games and Monday Night Football. 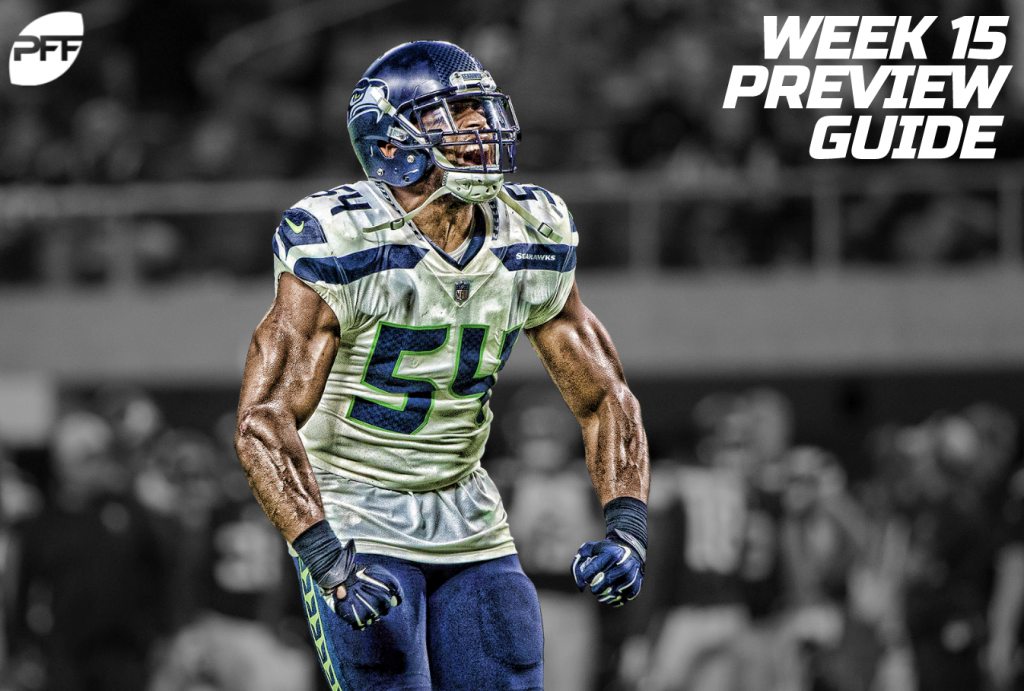 Key NFL Matchup/Stat: Texans' Deshaun Watson has been under pressure on 43.3% of his dropbacks this season, the second-highest percentage among signal-callers with at least 200 total dropbacks on the year. His 82.4 passer rating on pressured dropbacks ranks eighth among qualifiers, as well.

Fantasy Stats to Know: The Jets will be without Isaiah Crowell this week, which puts Elijah McGuire in the lead back role. The second-year man touched the ball 20 times last week and found the end zone as a runner. Given the potential for another healthy workload, McGuire is in the mix as a flex play.

Fantasy Stats to Know: Jarvis Landry showed last week that he’s still a viable WR2 fantasy option after the veteran posted two scores against the Panthers. Landry makes for a top-20 play this week in a potential high-volume situation against Broncos defensive back Justin Simmons. The hybrid safety has been extremely fantasy-friendly to opposing wideouts with 40 catches allowed on 48 targets in his coverage.

Saquon Barkley, Nick Chubb off to impressive starts in the NFL

Key NFL Matchup/Stat: Amari Cooper has averaged 2.84 yards per route run since joining Dallas in Week 9, which ranks fourth among NFL wideouts with at least 100 routes run in the six-week span. He also has recorded a 141.7 passer rating when targeted in a Cowboys uniform, ranking fifth among the same group of wide receivers.

Fantasy Stats to Know: Over the first eight weeks of the season with the Raiders, Cooper ranked a lowly 69th among wide receivers in fantasy scoring. Over the last six weeks with the Cowboys, he’s No. 1 with six touchdowns and a massive 641 yards. Cooper is locked in as a WR1 play this week.

Andrew Luck and T.Y. Hilton are carrying the Colts in their playoff push

Key NFL Matchup/Stat: Ravens edge defender Za'Darius Smith is on pace for a career year as a pass-rusher. He currently ranks 13th among qualifiers at the position in pass-rush win rate (16.6) and eighth in pressure rate (14.0).

Fantasy Stats to Know: It’s been a roller coaster ride at quarterback in Tampa Bay this season, but Jameis Winston seems to have finally gained control of the position. Winston has been in play as a QB1 fantasy option over the last several weeks, but fantasy owners may want to look elsewhere this week. Winston has to face a stout Ravens defense that hasn’t allowed more than two passing touchdowns since Week 2.

Key NFL Matchup/Stat: Falcons' Grady Jarrett flies under the radar at a loaded defensive interior position in the NFL. He currently ranks seventh among all qualifying interior defensive linemen in pass-rush win rate (16.1) and tied for 10th in pressure percentage (11.7).

Fantasy Stats to Know: Sure, this wasn’t the season you had hoped for out of David Johnson, but the Cardinals back hasn’t been a disaster. He enters this week 10th among running backs in fantasy scoring and leads all players in team touch share. Better yet, Johnson draws a plus matchup against a Falcons defense that allows the third-most fantasy points per game to running backs, with backs finding pay-dirt on the ground against the Cards in seven of their last 10 games.

Key NFL Matchup/Stat: Only Detroit Lions' Damon Harrison, a known superhero when it comes to run defense, has more run stops this season than Chicago Bears' Akiem Hicks. The big man is having a career year in multiple respects in 2018.

Fantasy Stats to Know: Yes, the matchup for Aaron Jones isn’t pretty. Chicago has been a bear of an opponent for opposing running backs this season with just three rushing scores and the third-fewest fantasy points per game allowed to the position. But don’t overvalue the matchup in your decision-making process this week. Jones still should be started as an RB2 option.

Greenline/Predictive Analysis:  In a rematch of Week 1, the Bears are now almost a touchdown favorite at home against a Green Bay team that was laying that many points opening night. We like the Packers to keep this game close, on the strength of a rejuvenated Aaron Rodgers against a Bears quarterback that has struggled mightily of late in Mitchell Trubisky.

Fantasy Stats to Know: Don’t expect Derrick Henry to repeat last week’s historic performance, but he is in play as an RB2 option. Henry faces a Giants defense that has struggled for much of the season against the run with opposing backfields topping 100 yards on the ground in five of their last six games.

Greenline/Predictive Analysis: While the Giants have looked good over the last month, they are going to be without Odell Beckham Jr. and Landon Collins against a Titans team that needs a win to stay afloat in the AFC Wild Card race. We think that the Titans can at least cover the number here, and possibly win outright after a 10-day layoff.

Titans' Jayon Brown climbing the ranks of late, standing out on passing downs

Raiders' Derek Carr has had a bit of a resurgence in the last two weeks. He earned a 90.4 overall grade in Weeks 13 & 14, which leads all quarterbacks with at least 50 offensive snaps in the two-week span.

Fantasy Stats to Know:  With A.J. Green out for the season, Tyler Boyd has emerged as the Bengals' de facto No. 1 wideout. Fantasy owners are going to want to fire him up this week as a WR2 play against the Raiders. Boyd will face Nick Nelson out of the slot, which presents a big-time advantage. On the season, Nelson is allowing a 70 percent catch rate with 14.0 yards per catch in his coverage. He’s also surrendered two touchdowns on just 16 catches in his coverage.

Despite strong two-game stretch, is Derek Carr the Raiders QB of the future?

Bills edge defender Jerry Hughes very quietly has the second-best pass-rush grade among qualifiers at his position through Week 14. He has recorded 62 total pressures across his 310 defensive snaps so far this season.

Fantasy Stats to Know: Last week was ugly for Kenny Golladay owners, as the Lions wideout caught just two balls for five yards. Things don’t look much better for Golladay this week, as he projects to see shadow coverage from Tre’Davious White. The Bills corner has stood out this season, allowing 22 catches on 41 targets. That’s an average just 3.2 targets per game in his coverage.

Key NFL Matchup/Stat: Dolphins rookie cornerback Minkah Fitzpatrick has allowed a 49.6 passer rating from a slot alignment this season, which leads all cornerbacks with at least 150 coverage snaps in the slot.

Fantasy Stats to Know: Kenny Stills was one of last week's biggest fantasy plays, but don't chase last week's results. Stills gets a tough draw in this contest with the Vikings currently allowing the fifth-fewest fantasy points per game to wide receivers. Minnesota has allowed just three touchdowns to wideouts over their last nine games.

Key NFL Matchup/Stat: While the Jags' defense has regressed as a unit compared to last season, Calais Campbell is still playing at a high level along the edge. The big man currently ranks tied for fourth in overall grade (89.8) and leads all at the position in run-defense grade (91.7).

Fantasy Stats to Know: Old running backs typically aren't the thing fantasy championships are made of. Case in point: Adrian Peterson. The name-brand fantasy option accomplished the rare feat of not topping 100 rushing yards in a game where he had a 90-yard run. He followed that up last week with just 16 yards on 10 carries. While he faces a Jags defense this week that just got torched by Derrick Henry, they've also been very tough against the run for much of the year. Fade Peterson this week.

Key NFL Matchup/Stat: Of the 66 NFL wide receivers with 50-plus targets on the season, only one has a perfect passer rating when targeted. His name is Tyler Lockett.

Fantasy Stats to Know: While Russell Wilson hasn’t put up big yardage numbers, he has managed to find the end zone through the air and currently sits tied for fourth in the league with 29 touchdown passes. Better yet, we have a recent sample of how he’ll fare against the 49ers. Wilson faced San Francisco just two weeks ago and tossed four touchdown passes in that contest.

WR Tyler Lockett is having a historically efficient season in Seattle

Key NFL Matchup/Stat: Patriots guard Shaq Mason has been a road grader all season long, as he leads all at the position with at 100 run-block snaps in run-blocking grade at 75.0.

Fantasy Stats to Know: Antonio Brown is tied for the league lead with 12 receiving scores. Of course, Brown is a threat to go off every week, but he gets a tough draw in this one with shadow coverage projected to come from Stephon Gilmore. The veteran broke out this season and currently allowing a stingy 47% catch rate.

Key NFL Matchup/Stat: It's hard to bring up the Rams without also bringing up Aaron Donald. The 2017 Defensive Player of the Year is playing at an even higher level in 2018, as he currently leads all interior defensive linemen in overall grade (93.7) and has bested previous pass-rush records set by him through the first 14 weeks of the season.

Fantasy Stats to Know: Brandin Cooks has disappointed over his last two games with just 84 combined receiving yards. However, good things are ahead for Cooks in Week 15. He gets to face a decimated Eagles secondary that just got torched by Amari Cooper. The Eagles have allowed three receiving scores to wideouts in two of their last four games.

Key NFL Matchup/Stat: Saints' Sheldon Rankins and David Onyemata have both earned top-20 overall grades among interior defensive linemen with 300-plus defensive snaps on the year. While Drew Brees and the offense get a lot of the love when it comes to New Orleans, the team's two big men in the middle of the defense deserve their fair share of praise.

Fantasy Stats to Know: Entering Week 15, Michael Thomas leads the NFL with 102 catches. Remarkably, he’s done that on just 118 targets. Thomas’ outstanding efficiency and heavy involvement in the Saints offense bode well this week with a plus matchup on tap against James Bradberry. The Panthers corner has struggled for much of the season and is allowing a receiver friendly 14.2 yards per catch in his coverage.