Titans' Jayon Brown climbing the ranks of late, standing out on passing downs

The Tennessee Titans have one of the NFL’s strongest linebacker position groups as well as a young, emerging defense that has given up less than 20 points five of the last seven weeks. Jayon Brown, second-year linebacker and one of the most efficient players on Tennessee’s defense, is among the youngsters rising to the occasion.

Brown has effectively turned his season around, earning the fourth-highest overall grade (86.6) among off-ball linebackers in Weeks 7-14 after managing just a 62.0 overall grade in the first six weeks of the season.

Tennessee has had recent matchups with some of the league’s high-flying passing offenses such as the New England Patriots and the Indianapolis Colts, but Brown has thrived in passing situations.

Although opposing quarterbacks targeted Brown just once every 8.8 coverage snaps on average in Weeks 7-14, he only surrendered a reception every 16.0 coverage snaps, which was good for fifth-ranked rate among linebackers. He also allowed a completion on just 55.0 percent of the passes thrown his way, which ranked second among the 46 off-ball linebackers with 150-plus coverage snaps in said span. 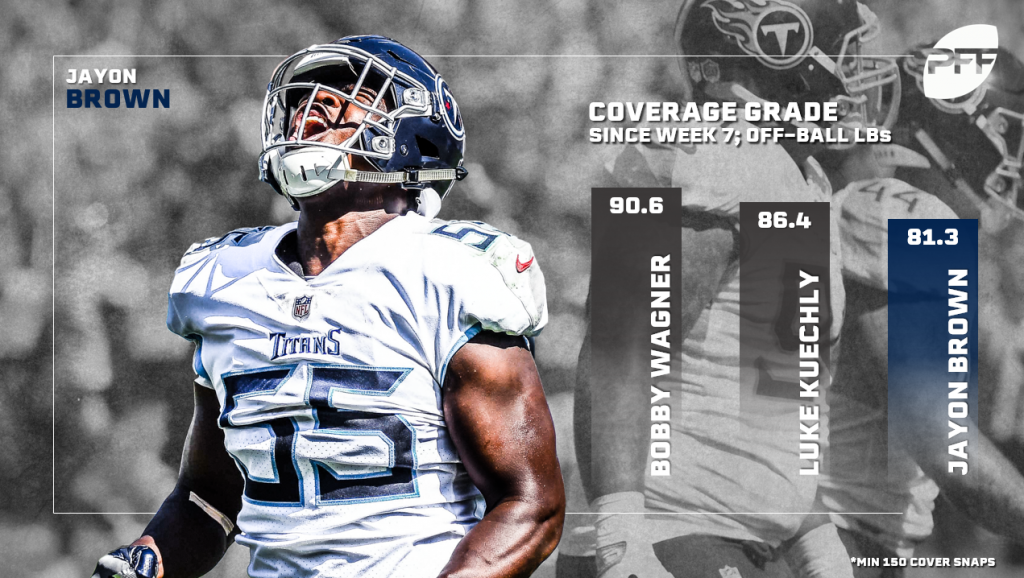 Brown is no stranger to having success in the passing game, as the UCLA alumnus ranked 13th among the 116 FBS off-ball linebackers with an 81.7 coverage grade his last year of college (2016). He also had three interceptions and a 50.4 passer rating when targeted in that year, the latter ranking first among the same group of FBS linebackers.

Although Brown has only played 33 slot coverage snaps, his numbers only get more impressive when looking at his advanced metrics in slot coverage. He has only allowed one reception on these snaps, which is the best average among all NFL linebackers.

Brown has yet to allow a touchdown this season. The team’s seventh-ranked team coverage unit is due in large part to Brown’s effort in coverage as well as his 75.0 passer rating allowed.

Not only can Brown affect the passing game in coverage, but his pass-rush abilities are also something to be desired. His 90.8 pass-rush grade in the last eight weeks ranks third among qualifying linebackers. The 23-year-old linebacker has amassed 11 total quarterback pressures in 58 pass-rush snaps during the previous eight weeks. His 23.6 pass-rush win rate in also ranks second among the 35 off-ball linebackers with 25-plus pass-rush snaps in said span.

Efficiency is what’s valued in today’s NFL, and Brown is the league’s eighth-most productive pass-rusher among qualifying linebackers. He has earned a pass-rush productivity mark of 12.7 while securing a position-high four sacks since Week 7.

After earning a 54.1 season grade in Brown’s rookie year, he has revitalized his career and is on one of the most impressive runs in the NFL. Brown is quickly finding himself near the top of opposing team’s scouting reports largely because of his recent development in Tennessee.