The data analytics team is back with their updated playoff projections heading into Week 15. While they spit out the numbers, I’ll give a more eyeballed analysis of my feelings on each heading towards the playoffs.

A few weeks ago, it appeared as if the Saints were going to cakewalk to the number one seed in the NFC. Now, the path looks murkier. Drew Brees has had two of his three lowest-graded games the past two weeks, and they face three straight teams in the Panthers, Steelers and Panthers that are fighting for their playoff lives.

The Rams have an easier shot at winning out than the Saints with the Carson Wentz-less Eagles, Cardinals and 49ers still left on the schedule, but the Saints still own the head-to-head tiebreaker for home-field. After easing Aqib Talib in the past couple weeks, his performance down the stretch will be crucial for Los Angeles.

The Bears are pretty much locked into either the 3 or 4 seed at this point. With that in mind, it’d behoove them to make sure Mitch Trubisky’s shoulder is 100% come playoff time. His 45.1 overall grade this last week was the lowest of any QB in Week 14.

Six weeks ago, the whole world was ready to can Jason Garrett after a brutal 28-14 loss to the Titans on Monday Night Football. Since then, they’ve been the hottest team in the NFL with wins over the Eagles (twice), Redskins, Falcons and Saints. Jerry Jones and company look like geniuses for taking Amari Cooper from Oakland. He’s been the fourth highest-graded receiver in the NFL since joining the Cowboys, and Dak Prescott has a passer rating of 141.7 when targeting him.

So much for all the rebuild talk. Russell Wilson’s lights out play this year has gotten lost in the shuffle of many superb quarterback seasons. Also lost is the fact that Wilson is on pace for his highest rushing grade since his rookie year, as his legs have played a huge role in the Seahawks offense.

Here’s where it starts to get hairy. The top-5 teams are all but decided in the NFC. The Vikings have no cakewalk to the barn, but their saving grace could be a Week 17 matchup with Chicago, who could very well have nothing to play for at that point.

Can Nick Foles capture lightning in a bottle twice? Considering how improbable it was the first time around, I’m not going to bet against them. The only problem is they have a bumpy road ahead. They travel to Los Angeles to face the Rams this week before hosting the Texans then traveling to Washington in Week 17.

The data still says there is a chance … but another performance like the one Mark Sanchez put forth last week would tell you otherwise. San Diego Fleet's Josh Johnson should earn the nod of Sanchez moving forward, but he likely doesn't provide much hope, either.

Of all the teams on the outside looking in, the Panthers are likely the most talented at this point. They’re also the team that has to face the current top-seeded Saints twice in their last three games. With the way Cam Newton has played of late, that could be the nail in the coffin. Only Jeff Driskel, Josh Rosen, and Josh McCown have lower grades among starters over the last five weeks.

While Green Bay keeps trying to play their way out of the playoff picture, everyone else in the NFC keeps playing them back. It’s truly a run-the-table situation for Green Bay at this point with a good deal of help as they lose the head-to-head tiebreaker with Minnesota if they’re equal in the win column. 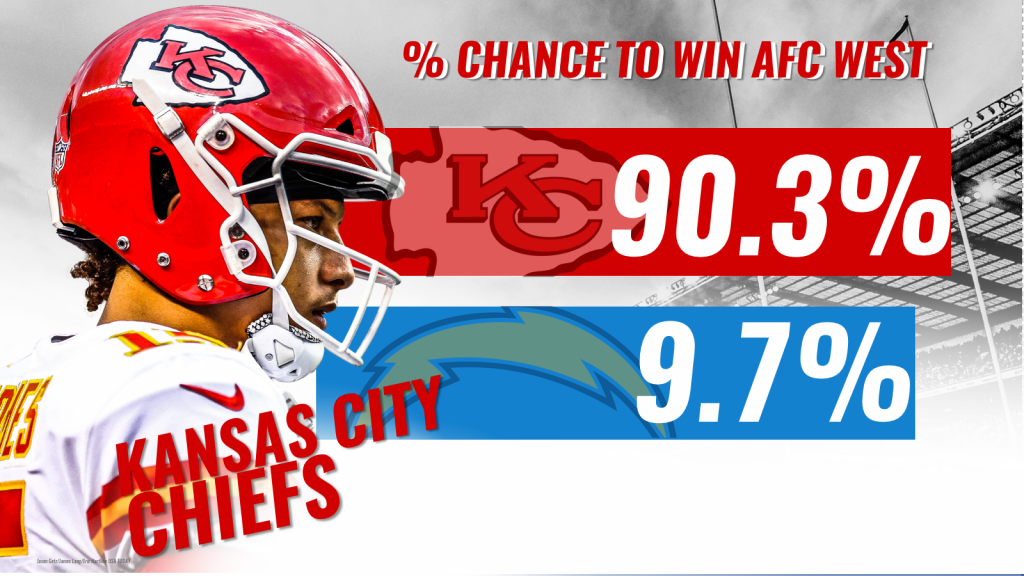 After the Miami Miracle, the data backs up how I feel: The AFC is the Chiefs to lose. Even if they do lose to the Chargers tonight, they’ll still have to drop another to either the Seahawks or the Raiders to relinquish home field advantage. Good luck everyone else.

The loss last week all but cooked New England’s shot at home field advantage, but with the Bills and Jets on the docket after this week's matchup in Pittsburgh, they still have a favorable road to a bye. Their Week 1 victory over the Texans looms large as it could prove to be the difference between a first-round bye.

The Texans road to a bye just got a little easier with news of Wentz's possibly season-ending injury. This is a Texans team whose defensive turnaround, though, has been one of the storylines of the season. They’re sixth in team coverage grade after finishing 23rd a season ago.

While everyone in the AFC is trying to zig with a high-flying passing offense, the Ravens are zagging with an option-heavy attack led by Lamar Jackson. Sticking with the rookie was the correct decision with how formidable their secondary is and the state of the run defenses of the top teams in the AFC.

Even with the Chiefs, Ravens and Broncos remaining on the schedule, the Chargers are still projected for the second-most wins in the AFC. It’s difficult to argue. The defense has looked like a different animal since Joey Bosa’s return, as he’s notched at least five pressures in each of his last three games.

The Jekyll and Hyde Titans are one of the 2018 NFL season’s great mysteries. It starts and ends with quarterback Marcus Mariota. The fact that he put up an 87.3 grade against New England in Week 10 and then a 34.8 the next week against Indy is indicative of how I feel about the Titans going forward.

Indy is a flawed team for sure, but they’ve shown the ability to hang with any team in the league. Quarterback Andrew Luck just recently was named to PFF’s Pro Bowl team and has earned grades above 80.0 in six of his last seven games. In fact, only Brees has a higher grade among QBs since Week 8.

Even with the Patriots and Saints still on the schedule, the Steelers still have a better chance than not of making the playoffs. Truthfully, it’s going to come down to how Ben Roethlisberger plays with his rib injury. His 92.9 grade in the second half of the season after a 65.7 grade in the first half of the season is at least encouraging.