Expectations could not have been lower for the New York Jets headed into the 2017 season. Sportsbooks forecasted the team to finish with the fewest wins in the NFL, while writers and bloggers wrote them off throughout the offseason (with many predicting the Jets to hover around 0-3 wins). A roster lacking depth on paper, the New York Jets remained competitive for a majority of the season due to competent play from the journeyman Josh McCown, the emergence of young talent like Jamal Adams and Robby Anderson and free agent pickups like Demario Davis stepping up in an impactful way.

While the 2017 season was better than most expected, the roster is missing many key pieces and lacks significant depth. In order to take the next step in ensuring this young core can reach the playoffs and sustain success once they get to that point, there is a lot of work to do. On top of having three picks in the top 50, they are projected to have nearly $100 million to bolster the roster. This is a make-or-break year for the Maccagnan-Bowles duo, so let’s take a look at how they could best approach free agency. 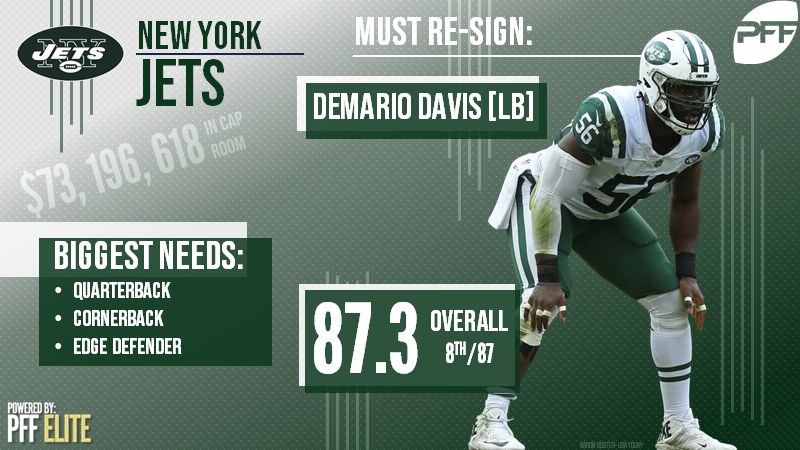 In June of the offseason, the Jets made a trade with the Cleveland Browns which sent Calvin Pryor away in exchange for Davis. The trade ended up as a completely one-sided deal, as Davis had the best season of his career in 2017 on the team that drafted him back in 2012. He went from grading out at 43.1 and 47.3 overall in 2015 and 2016, respectively, to posting the eighth-highest grade among linebackers with an 87.3, more than 10.0 points higher than his previous career high.

Davis displayed massive improvements in every phase of the game in 2017. He quickly became a leader on defense through his inspired play, finishing with 65 total defensive stops, second-most among linebackers. A “lightbulb went off” for Davis this past season, so it would be in the team's best interest to bring him back for 2018 and beyond.

This story is far from untold. The Jets need a franchise quarterback. In the 12 years since PFF began grading, the Jets have had 12 quarterbacks start a game. Christian Hackenberg is not the answer. Bryce Petty is not the answer. The Jets are in an ideal position to sign Kirk Cousins given their cap flexibility, and with Mike Maccagnan and Todd Bowles fighting for their jobs in the upcoming season, it may prove too risky for the regime to select a QB in this year’s draft.

While signing Cousins will limit the Jets’ options financially, it gives them stability at the league’s most important position. Coming off a career year in 2016, Cousins took a bit of a step back this past season, but some of this can be charged to his offensive line and playmakers. He does a lot of things well, chiefly excelling on deep passes and play action passes. Since 2016, he owns a 130.0 passer rating on passes traveling 20-plus yards downfield, the fourth-best mark among 33 qualified quarterbacks. On play action in 2017, his passer rating of 118.7 ranked third among 40 qualified signal-callers. Cousins struggled under pressure this past season, so the Jets would be wise to improve their offensive line a great deal if they land the prized signal-caller this offseason.

At only 26 years old, E.J. Gaines had a breakout season opposite PFF Rookie of the Year, Tre’Davious White. The cornerback duo was among the best in the NFL, with Gaines finishing 2017 with an 86.6 overall grade and ranking 13th at his position. He impressed throughout the year, allowing only one touchdown and a 74.8 passer rating in his coverage all season.

Morris Claiborne was playing well until his injury and could be brought back, but his health is still a big question mark. With a fairly deep cornerback free agent class, the Jets don’t have to limit their options to just one either. Rashaan Melvin and Kyle Fuller are also free agents the team could look into signing to bolster their young secondary heading into 2018. You can never have too many defensive backs, especially in a Todd Bowles defense.

The Giants center missed the majority of his 2017 season due to a concussion, but when healthy and playing at his highest level, he is arguably one of the best pass-blocking centers in the NFL. The same couldn’t be said for Wesley Johnson, who earned lowest overall grade in 2017 among 35 qualified centers. Johnson allowed 23 pressures across 518 pass-block snaps in 2017. To compare: Richburg has allowed 14 pressures over his last 773 pass-block snaps. Adding a proven center who will be just 27 years old in 2018 via free agency could pay big dividends for the entire Jets’ OL in the long-term.