Nov 19, 2017; Carson, CA, USA; Los Angeles Chargers running back Austin Ekeler (30) runs for a touchdown against the Buffalo Bills in the second half of a NFL game at StubHub Center. Mandatory Credit: Richard Mackson-USA TODAY Sports

The NFL is back, and with it comes the grueling ever-tormenting struggle of weekly fantasy football start/sit decisions.

Have you ever felt like your fantasy players hate you? That, when torn between two players, you always pick the wrong one? Or, every time you finally move an underperforming superstar to your bench, they have a monster game just to spite you?

Here are my Week 1 start/sit recommendations for shallow, medium, and deep fantasy leagues.

Elliott averaged 59 snaps per game in 2018. Per NFL Network reporter Jane Slater, he’s expected to play between only 20 and 25 snaps in Week 1. That’s still enough to warrant starting him, even in shallow leagues as a high-end RB2. He should get all of the goal-line work in a plus-matchup at home, favored by 7.0 points against the Giants. This also means Tony Pollard is probably still worth starting, even in medium-sized leagues as a low-end RB2.

Westbrook ran just nine routes this preseason, and still was targeted a whopping seven times. Recently, OC John DeFilippo told Troy Aikman Westbrook was “the best route runner he’s ever been around.” Keep in mind he has been around some great route runners, like Adam Thielen and Stefon Diggs as recently as last year. So, if he really believed that, we should expect elite usage to follow. It did in the preseason, and I’d expect massive target-volume again in Week 1. Westbrook ran 78% of his routes from the slot this preseason, and Kansas City allowed the seventh-most fantasy points per game to slot wide receivers last year, after surrendering the third-most in 2017.

If Melvin Gordon sits out for Week 1 (likely at this point), start Ekeler with confidence as a borderline RB1. In Week 3 of the preseason, Ekeler played on 15 of 23 snaps with the first-team offense (65%), while Justin Jackson played on 8 snaps (35%). This is the sort of split I’d expect from both running backs in Week 1. As 6.5-point home favorites against the Colts, Ekeler ranks fifth among running backs in our projections this week, even though we’re still projecting Justin Jackson to score 27% of the team’s running back fantasy points.

Carlos Hyde, who joined the team just days ago, will get some work this week, but Johnson should still handle the majority of the team’s backfield work. Over the past three seasons, Alfred Blue averaged 14.0 carries, 5.3 targets, and 13.5 fantasy points per game when Lamar Miller missed time. That should be Johnson's absolute floor this week, in a game that’s projected to be a shootout and with the fourth-highest over/under of the week (50.0). Expect Johnson to see a lot of work in the passing game and push for high-end RB2 numbers. 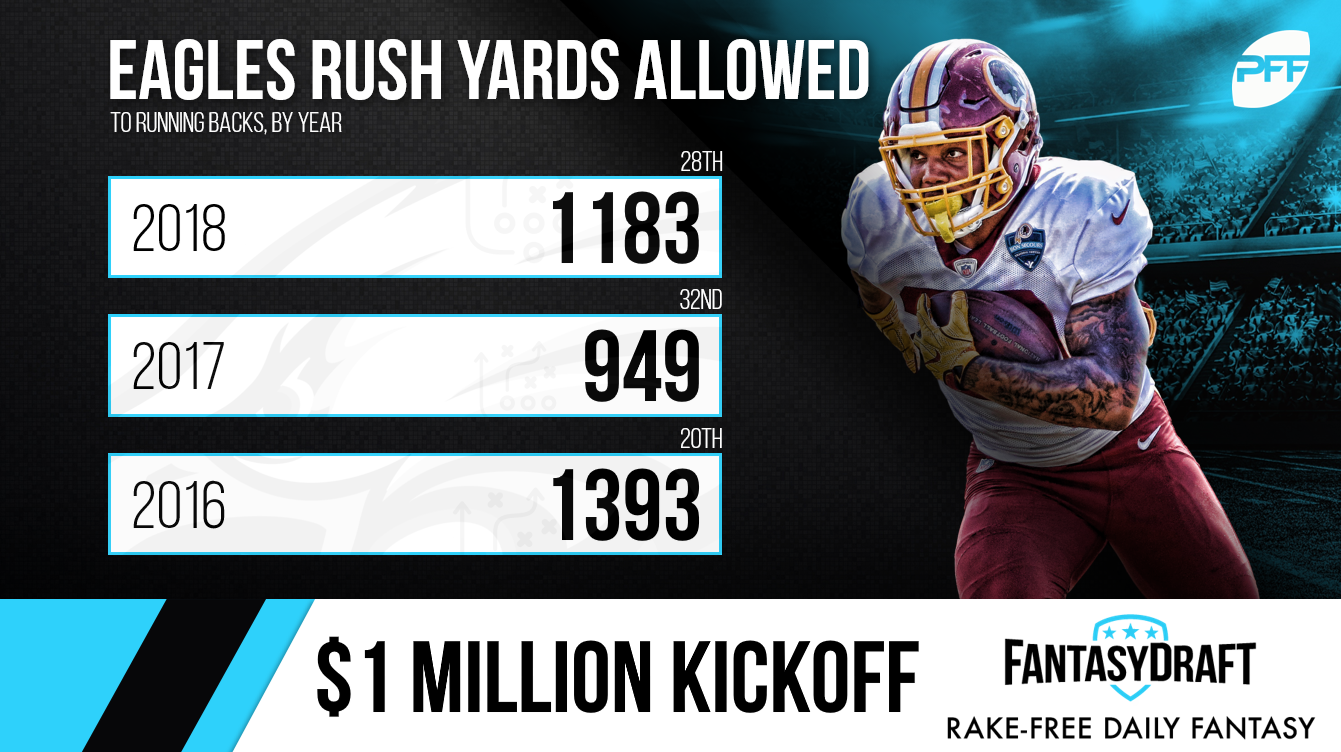 Guice was a terrific redraft value all year, but after spending most of the offseason sidelined with injuries, I’m not sure he’ll see a workhorse workload in Week 1. Further, it’s a brutal matchup for a running back who will likely be spelled by Chris Thompson in passing situations. The Eagles are 10.0-point favorites and have ranked top-10 in rushing fantasy points allowed to opposing running backs in each of the past three seasons.

Like with Guice, Ryan should be in store for a big 2019, but I expect him to start off slow in a brutal matchup against the Vikings. Over the past three seasons, opposing quarterbacks average 11.0 fantasy points per game when playing at U.S. Bank Stadium (worst). I’d consider benching him this week if I had a competent QB2 on the bench.

I avoided Davis all offseason in drafts — he’s underwhelmed throughout his career and now has far more competition for targets in 2019 — and is now an easy fade for me in Week 1. It’s not a guarantee, but just the chance that he might face shadow coverage from Denzel Ward (one of the toughest shadow cornerbacks in the game) leaves me looking elsewhere in shallow leagues.

Crowder, as Adam Gase’s starting slot wide receiver, is certainly worth rostering this year, but he’s probably worth benching this week in shallow leagues. Buffalo allowed the seventh-fewest fantasy points per game to slot wide receivers last year, after giving up the 12th-fewest in 2017.

You may have drafted Winston as a QB2, but he’s a high-end QB1 this week. Winston ranks fifth in our projections, in what should be a high-scoring shootout against a 49ers defense that gave up the 10th-most fantasy points per game to opposing quarterbacks last season. Volume should be terrific as always, but the one concern with Winston, as always, is interceptions. However, that shouldn’t be a concern this week — San Francisco ranked second-worst in passer rating allowed (105.4) last season, with a 35:2 touchdown:interception ratio. 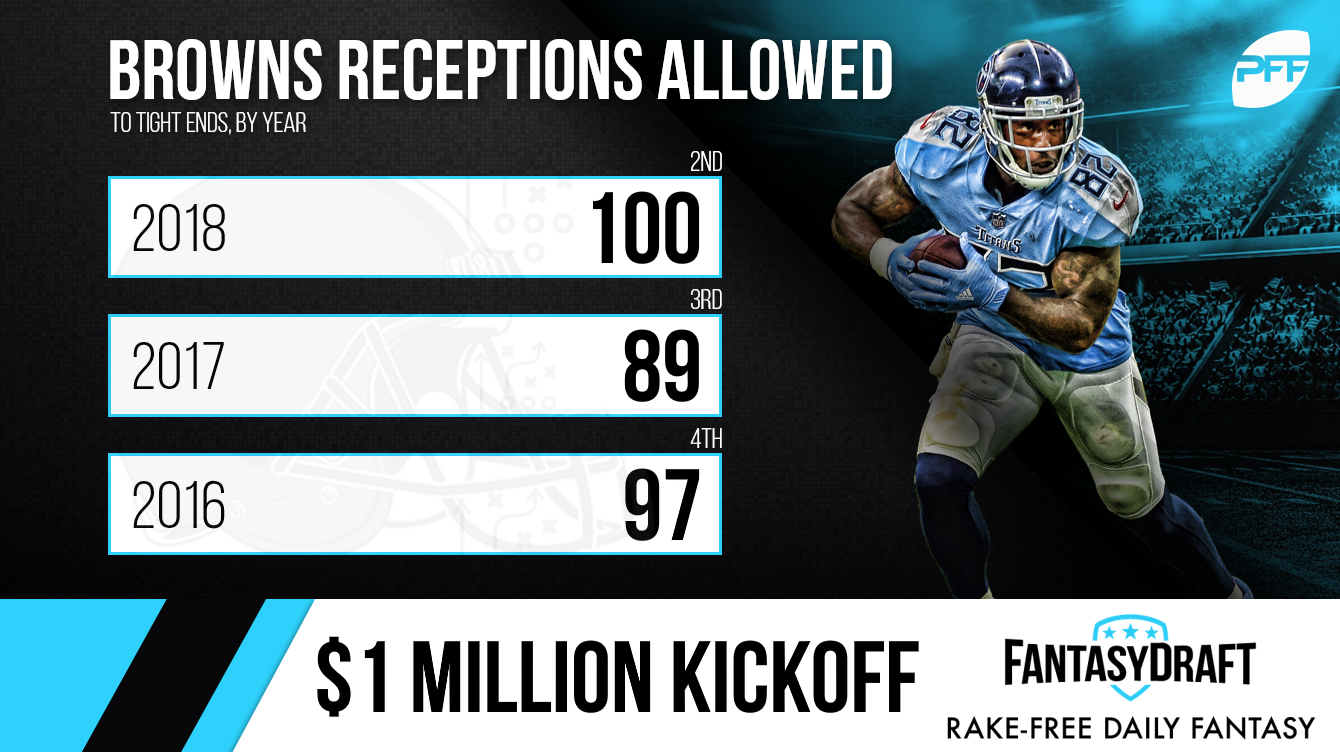 Walker ended up as my highest-own tight end this offseason, and now I’m drooling over his potential in Week 1. Over the past three seasons, Cleveland has given up the second-, third-, and fourth-most fantasy points per game to opposing tight ends.

Jackson might be my single-highest-owned player this year, and Week 1 seems like a terrific time to play him. Jackson has an unrivaled floor — scoring just 15.9 fantasy points in his worst game as a starter (best in the league) — and massive upside this week, against an anemic Miami pass rush. In 2018, Jackson broke the PFF record for fantasy points per dropback, while Miami ranked third-worst in fantasy points allowed per dropback.

Williams is still considered the Chiefs’ starter. LeSean McCoy will play, though it’s unclear how much. Sooner rather than later we’ll have to worry about McCoy turning this backfield into a near-even committee, but I think Williams is fairly safe for Week 1. Jacksonville is a tough matchup for running backs, and really all skill-position players, but as an especially competent pass-catcher, Williams will be safer than most.

Drake has been dinged up, but on Wednesday head coach Brian Flores said Drake was as talented as any player on the roster and “we look forward to giving him a lot of touches this week.” As the team’s best pass-catching back, that should be valuable work, as 7.0-point underdogs up against Baltimore’s stout run defense.

With Drake likely to see “a lot of touches” this week, of course Ballage is a fade. Last season Baltimore ranked top-four in yards allowed per carry and rushing fantasy points allowed to opposing running backs.

Moncrief appears to have locked up starting WR2 duties in Pittsburgh, which should prove to be a valuable role. However, he has an especially difficult matchup this week, in shadow coverage against Jason McCourty. McCourty was our sixth-highest-graded cornerback last year, and has been one of the league's most effective shadow cornerbacks over the past two seasons. Moncrief is just a fringe-WR4 in Week 1.

Singletary could earn every-down work at some point this season but he’s expected to start the year off as just the third-down back in a committee alongside Frank Gore and possibly T.J. Yeldon. That means he’s better off left on your bench this week.

I love Hockenson as a player. I don’t love playing rookie tight ends in fantasy, and especially not in Week 1. This week’s matchup is also especially troublesome for Hockenson. Arizona allowed the fewest fantasy points per game to opposing tight ends last year — their second top-three finish in three seasons.

Allison was one of my favorite value picks all year as Green Bay’s starting slot wide receiver. Over the past 10 seasons, Aaron Rodgers has targeted wide receivers out of the slot on 25.6% of his throws (fourth-most among quarterbacks) with a 111.6 passer rating (best). In Week 1, he should run the near-entirety of his routes up against slot cornerback Buster Skrine. Over the past two seasons, Skrine ranks worst of 63 qualifying cornerbacks in fantasy points allowed per route in coverage and seventh-worst in fantasy points allowed per target.

Sanders is going to be the team’s workhorse running back at some point this season. He probably won’t come close to that sort of volume in Week 1, but she should still lead the team in carries. That sort of workload will be valuable, as 10.0-point home favorites against the Redskins. He’s a high-end RB3 this week.

If forced to start any of the next three players, you probably didn’t have a great draft. But if you’re desperate, or in an especially deep league…

Barber was an unsexy pick all offseason but he should be the team’s starter. That alone makes him worthy of consideration this week as a borderline RB3 in PPR leagues.

The Jets have the worst cornerbacks corps in the NFL, and are especially vulnerable deep — they gave up the sixth-most fantasy points to wide receivers on deep passes last year. Even CB1 Trumaine Johnson (4.61 40-yard-dash at the combine in 2012) would be no match for Brown’s 4.34 speed. Josh Allen was inaccurate to all areas of the field but was most-competent on deep throws, recording 40% of his passing production on deep passes (most). Look for Buffalo to test the wheels on their shiny new toy and try to take the top off New York’s defense in Week 1.

This preseason, Tevin Coleman has played on 31 of 50 snaps (62%) with Jimmy Garoppolo under center. The other 19 snaps (38%) went to Breida. 49ers beat writer Matt Barrows is predicting a similar split for Week 1. Against a Tampa Bay defense that surrendered the fifth-most fantasy points per game to opposing running backs last year, I have Coleman ranked as a borderline RB2, and Breida as a mid-range RB3.