Which positions do the quarterbacks target most often?

Predicting fantasy football is an extremely difficult task — the number of variables one can look at is almost unlimited. Typically, the starting place is team tendencies or coaching tendencies. I suspect these might be stronger factors than quarterback tendencies, and I’m sure I’ll get to those other factors at a later date (like I did last year), but I like to leave no stone unturned.

So today, I wanted to see which quarterbacks targeted specific positions most frequently. Our data span the past decade (2009-2018) and our sample includes all likely starters with at least 800 career pass attempts (there are 22 total). In each chart we’ll be looking at the five quarterbacks who targeted a specific position (running backs, tight ends, wide receivers when running routes from the slot, and wide receivers when running routes outside) most or least frequently.

Before we dive any deeper, I should note that this data is heavily skewed by the surrounding talent a quarterback has played with throughout their career. If a quarterback had a Hall of Fame tight end throughout the majority of his career but weaker wide receivers, of course that’s going to imply they favor the tight end position more than the average quarterback. I’ll try to separate the signal from the noise in my analysis. 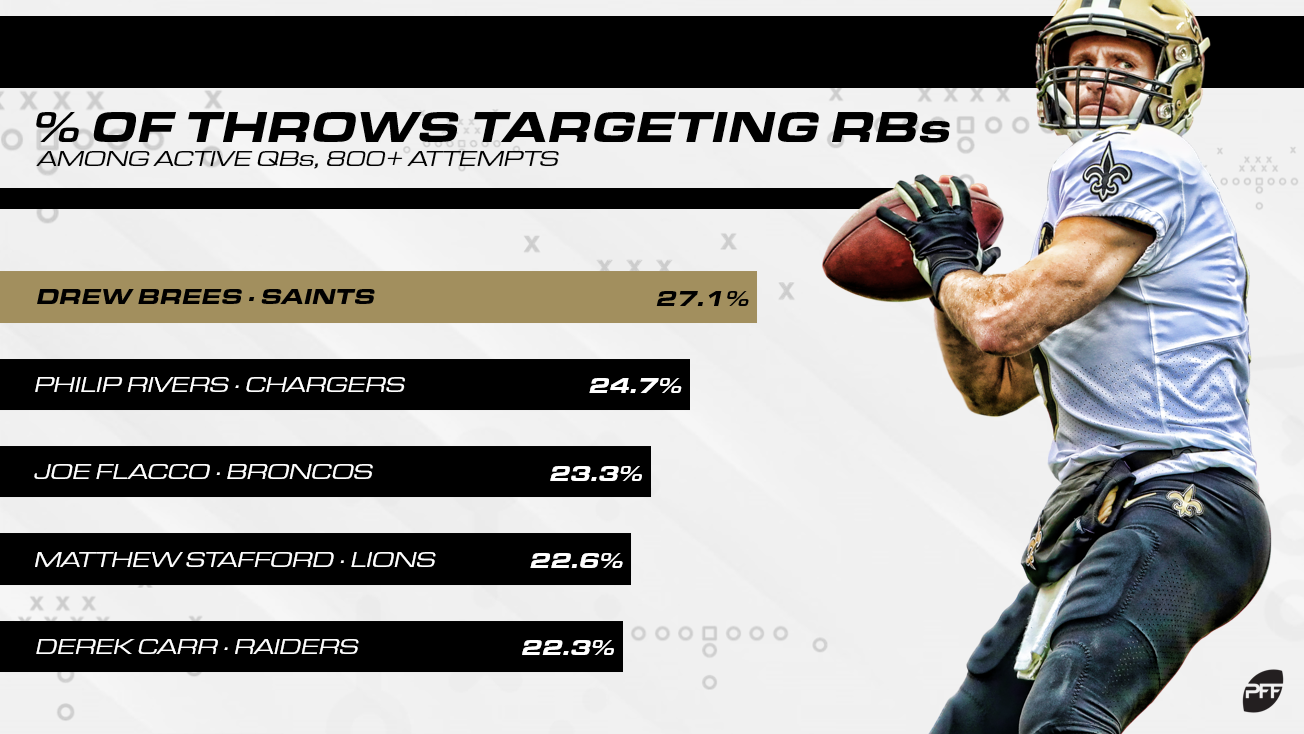 Philip Rivers, Joe Flacco, and Matthew Stafford were more of a surprise, though maybe not if we factor in the running backs they’ve played with throughout the majority of their careers (names like LaDanian Tomlinson, Darren Sproles, Ray Rice, Danny Woodhead, and Theo Riddick). Melvin Gordon has ranked top-10 in targets per game in each of the past three seasons and should rank highly again this year. With Flacco, however, I worry these numbers have more to do with John Harbaugh’s influence than his own love for pass-catching backs. Meanwhile, for Stafford, this could be good news for Kerryon Johnson, but probably just means Riddick will continue to eat into his fantasy production.

Derek Carr’s ranking could be good news for Josh Jacobs — who led all running backs in the 2019 draft class in career yards per target (10.4) and yards per route run (2.06). Similarly, Kenyan Drake should get a bump up my rankings if Ryan Fitzpatrick is named the team’s starter. Recently, Nick Foles said “he likes throwing to running backs.” However, the data don’t really bear this out (18.0%). During his Philadelphia tenure, Foles averaged only one more target (to running backs) per 100 attempts than Carson Wentz.

On the opposite end of the spectrum, Aaron Rodgers’ ranking here might mean it’s worth pumping the brakes (just a bit) on Aaron Jones’ bell-cow potential. Same for Miles Sanders and whichever running back assumes the Darren Sproles role in Philadelphia. Based on recent comments from Bruce Arians, I’d also bet Jameis Winston again ranks near the bottom of the league in this category next season. 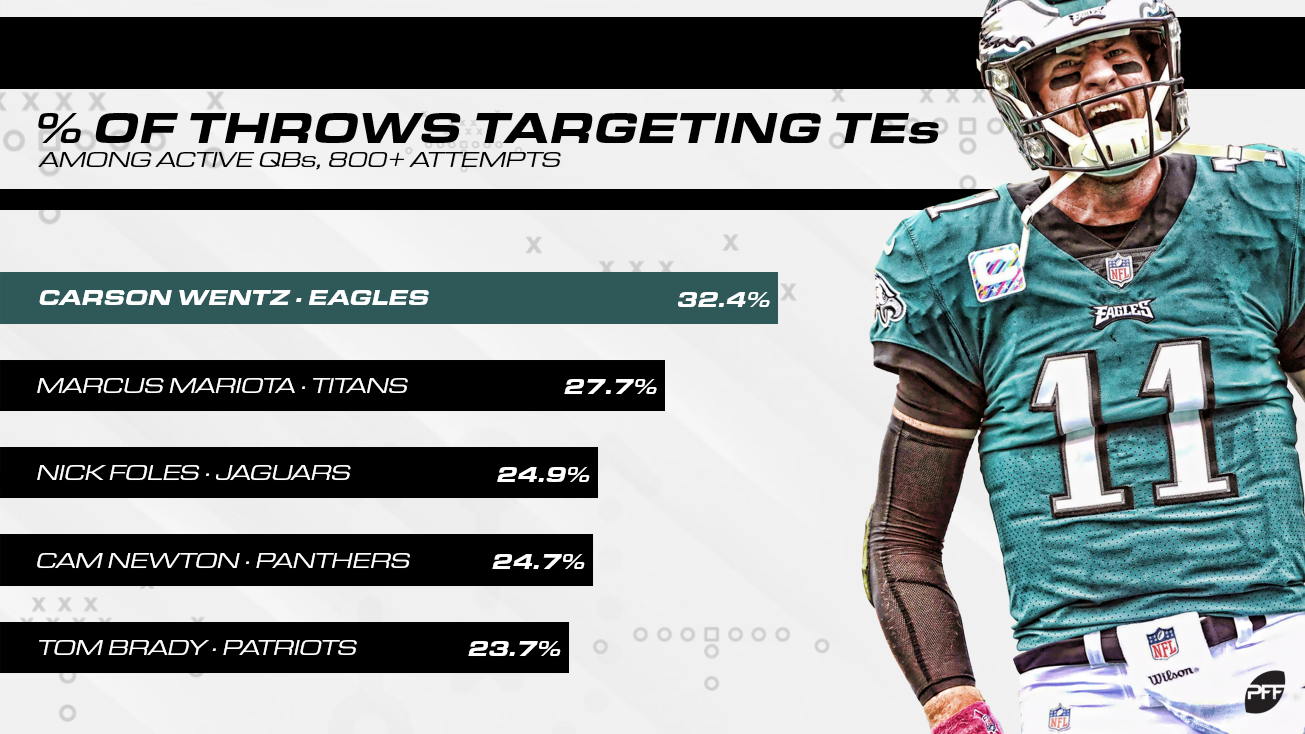 Carson Wentz has targeted tight ends more frequently than any other qualifying quarterback, and that’s another predictable stat. The Eagles have targeted tight ends 540 times during Doug Pederson's tenure — 61 more than the next-closest team. The Eagles should again lead the league in tight end targets (as they have in each of the past two seasons), and there might just be enough volume to go around to push a second tight end into fantasy relevance, which is good news for Dallas Goedert. Like Wentz, Foles benefited from Pederson’s scheme (ranking third here), but his preference for targeting tight ends also played a role in Jacksonville’s decision to draft Josh Oliver on Day 2. When offensive coordinator John DeFilippo was asked how much this (Foles’ preference for targeting tight ends) factored into the team’s decision to draft Oliver, DeFilippo responded simply, “Huge.”

Marcus Mariota’s ranking of second should remind all fantasy players of Delanie Walker’s immense potential value at current ADP (TE13). Roster talent surely played a role (poor wide receiver talent) in his ranking here, and likely so too did scheme. While the former point might be a concern (Mariota should now have the best supporting cast of his career), the latter point should not be. Tennessee’s new offensive coordinator is Arthur Smith, Walker’s tight ends coach from 2016-2018.

On the opposite end of the spectrum, I think we have a robust enough sample to conclude Ryan Fitzpatrick starting would be bad news for Mike Gesicki. 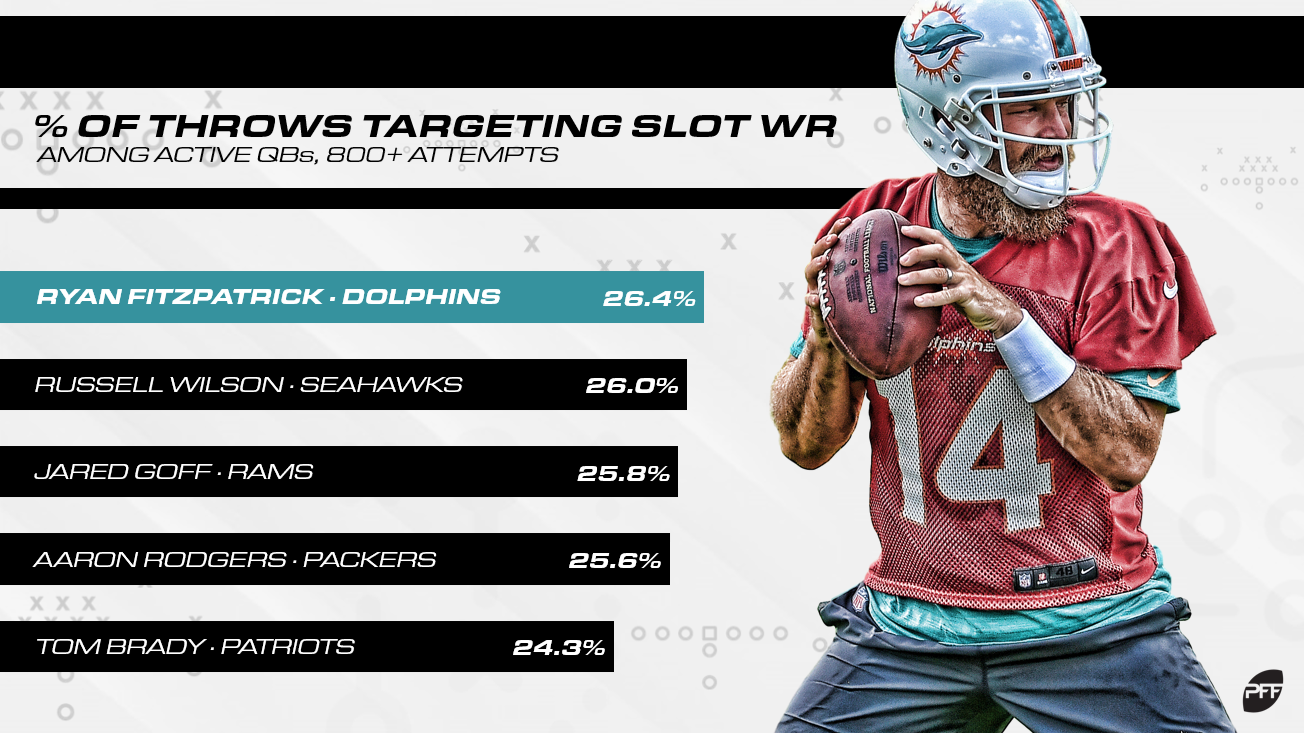 Okay, back to Fitzpatrick. If he’s announced as the starter in Miami, it’s worth upgrading the Dolphins’ starting slot wide receiver. Right now, we have no idea who that might be, but the most likely candidates are Kenny Stills and Albert Wilson. Both Dolphins receivers are tremendous values at current ADP.

It's hard to tell whether Russell Wilson just loves throwing to slot wide receivers, or if his ranking has more to do with talent (Golden Tate, Doug Baldwin, and Tyler Lockett) or scheme. In any case, it’s good news for Lockett, who will be the team’s starting slot wide receiver with Baldwin now retired. Though volume was a concern, Lockett just posted one of the most efficient seasons in NFL history. Without Baldwin on the field, he could flirt with borderline-WR1 numbers this season.

Jared Goff’s ranking is promising for Cooper Kupp, who seems criminally underrated at ADP (WR21). Last season, when Kupp played the entire game (i.e., when he didn’t leave early due to injury), he averaged 21.6 fantasy points per game, which would have ranked fifth-best at the position last year. Rodgers’ ranking should also benefit whichever wide receiver earns starting slot duties for 2019 — keep an eye on reports out of camp to determine who that might be. With so much up in the air behind Davante Adams, that receiver could be a league winner. Since Rodgers was named the starter in 2008, Green Bay’s second-most-targeted wide receiver has yielded two WR1 seasons, four WR2 seasons, two WR3 seasons, and two WR4 seasons for fantasy. All Green Bay wide receivers after Adams are being drafted in the eighth round or later.

On the opposite end of the spectrum, Flacco’s lowly ranking could be bad news for Emmanuel Sanders, who ran 63% of his routes from the slot last season. 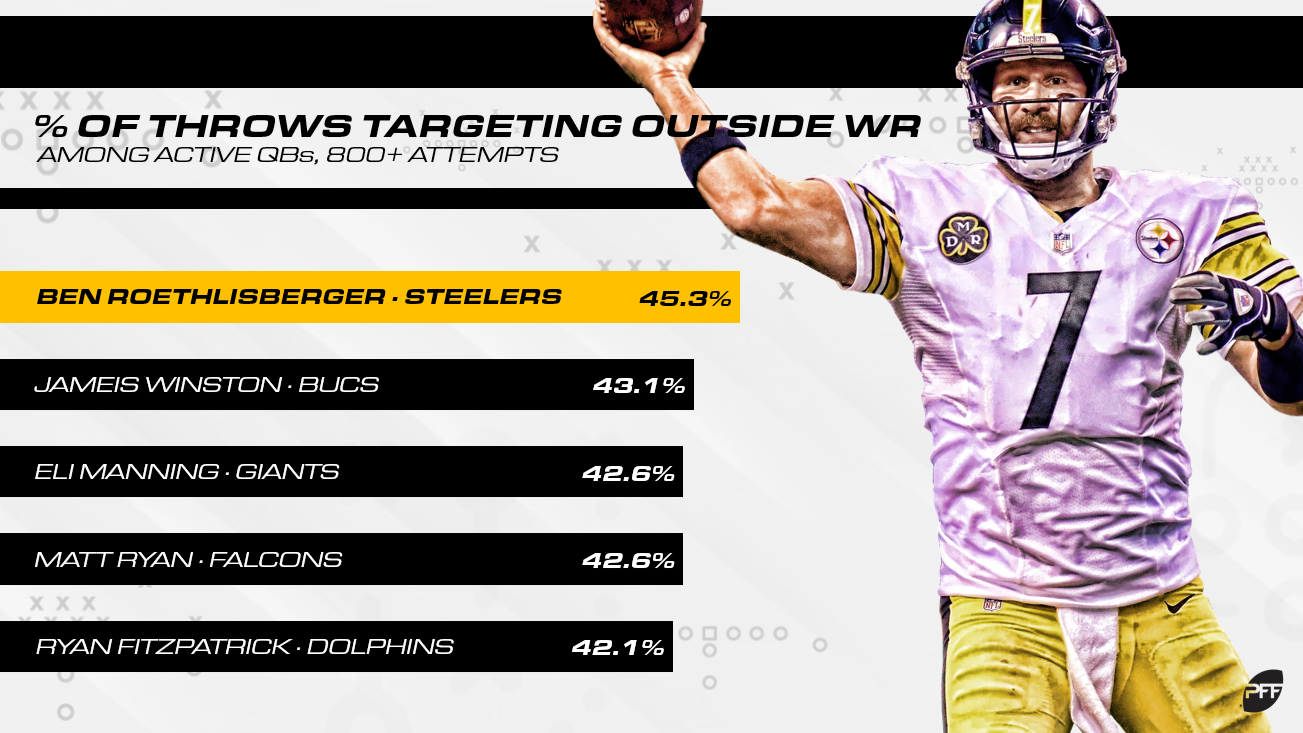 Ben Roethlisberger and Eli Manning both stand out at the top, and their rankings are especially interesting given surrounding roster talent. Roethlisberger’s new WR1, JuJu Smith-Schuster, is a bit inexperienced outside, running 61% of his routes from the slot over the past two seasons. However, over this span, and when Antonio Brown missed time, Smith-Schuster ran the majority of his routes outside and was even more productive. Similarly, Manning’s top-two wide receivers have run the far majority of their routes from the slot across their respective careers — Golden Tate (55%) and Sterling Shepard (75%). Likely, one of these two wide receivers will be miscast in 2019.

Wentz’s ranking stands out but is likely due to surrounding roster talent. He now has two hyper-capable outside wide receivers in Alshon Jeffery and DeSean Jackson, who should both be fantasy-relevant in 2019.