Which quarterbacks are the best at targeting which positions?

Passing tendencies are an important part of fantasy football evaluation. Quarterbacks have positions they tend to target more than others, and that can help us plan. In our last article we looked at quarterback passing tendencies — how frequently certain quarterbacks targeted various positions — to see if this couldn’t help us gain an edge in fantasy football. However, that article spoke only to volume and told us nothing of efficiency. Today, I wanted to look at how efficient each quarterback was when targeting each fantasy-relevant position. 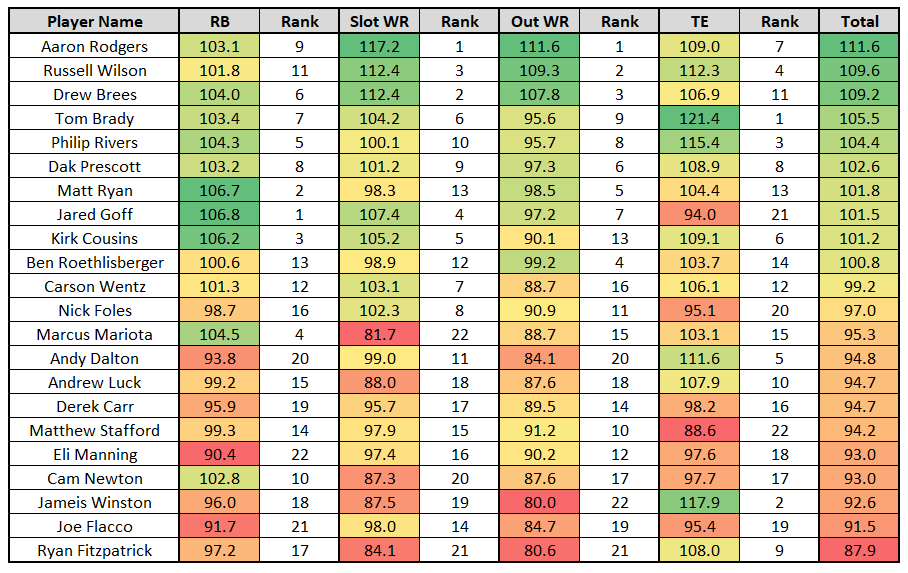 In many cases it’s hard to divorce a quarterback’s efficiency ranking when targeting a specific position from the talent level of the receivers who primarily played that position. For instance, how much of Tom Brady’s league-leading 121.4 passer rating when targeting tight ends is because he had the luxury of playing with Rob Gronkowski for the past nine years? Does his ranking mean anything for Benjamin Watson in 2019? Probably not. Therefore it will be my job in the analysis below to separate the signal from the noise and try to find instances where an individual ranking might be more useful for fantasy football players.

Without further ado, here’s what I found to be the most interesting and most important takeaways from this chart: 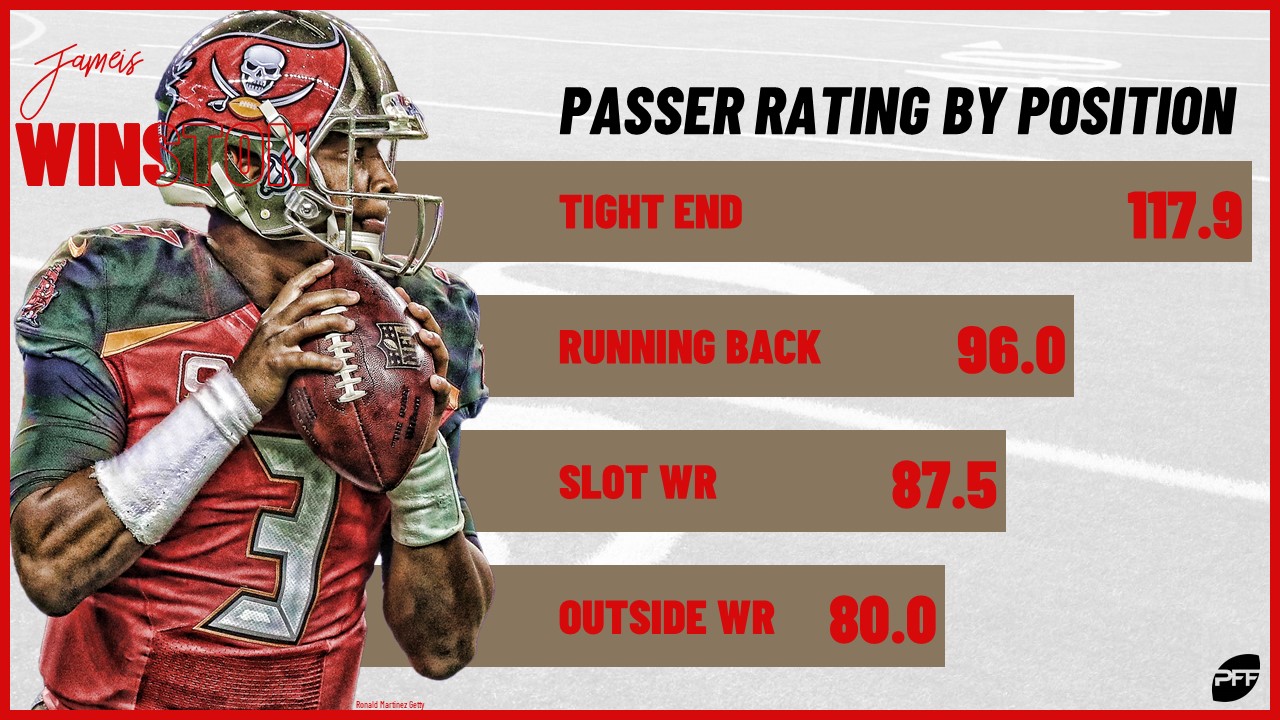 Winston ranks second-best in passer rating when targeting tight ends (120.7) but in the bottom-five when targeting any other position. Throughout Winston's career, tight ends have comprised 19.6% of his aimed throws, but 20.6% of his yards, 38.6% of his touchdowns, and just 13.8% of his interceptions. This should be good news for O.J. Howard, who also owns some impressive efficiency numbers of his own, including a position-leading 131.9 passer rating when targeted since entering the league.

All of this paints the picture of a breakout waiting to happen. The only concern is Bruce Arians’ history with the position, but, then again, Arians has also never had a tight end of Howard’s caliber.

Winston is also our least efficient quarterback when targeting outside receivers, which seems impossible when considering 72% of those outside wide receiver targets went to one of Mike Evans, Vincent Jackson, or DeSean Jackson. In Arians’ pass-heavy offense, Evans and Chris Godwin should still see enough volume to return value at ADP, but, given Winston’s numbers, their production probably won’t be as good as their volume might imply.

Rivers ranks third-best in passer rating when targeting tight ends (115.4), which makes sense given the fact that future Hall of Famer Antonio Gates makes up 67% of the tight end targets within his sample. Even so, this should also be good news for Hunter Henry, who is maybe just as strong of a breakout candidate (and for similar reasons) as Howard.

Before Henry sat out all of 2018 with a torn ACL, and after he put together some of the most-impressive age-adjusted seasons we’ve seen from an NCAA tight end, Henry was dominating the position in efficiency while splitting snaps with Gates. In 2016-2017, and among all tight ends with at least 100 targets, Henry ranked:

With a full offseason to recover, and Gates now 39 years old and unlikely to eat into playing time (if he’s even on the team anymore), I’m betting on a breakout year from Henry.

In all honesty, I have no idea which Minnesota wide receiver should be treated as the WR1, or who will score more fantasy points in 2019. I explored this conundrum more in-depth elsewhere, but ultimately hedged in my own rankings, ranking them neck-and-neck, both as WR1s.

One feather in Adam Thielen’s cap is Cousins’ history when targeting slot wide receivers (fifth-best), as opposed to outside wide receivers (13th). Last season, Thielen ran 57% of his routes from the slot, as opposed to only 23% for Stefon Diggs. Cousins was also more efficient when targeting Thielen (115.4 passer rating) than Diggs (107.9), and Thielen also trumped Diggs on a yards-per-route-run basis (2.10 vs. 1.72) and in PFF grade (fifth- vs. 19th-best).

Interestingly, within our sample, Luck ranks just 15th in total passer rating (94.7) and bottom-five when targeting either outside or slot wide receivers. However, he has been much better when targeting tight ends, and in spite of the fact that Coby Fleener and Dwayne Allen make up 59% of his career tight end attempts. Like with Winston, Luck clearly favors tight ends near the end zone. Across his career, tight ends make up 21.7% of his total attempts but 36.1% of his total touchdown passes.

The question is: Who does this favor more? Is it Eric Ebron, who led all tight ends in touchdowns (14) in 2019? Is it Jack Doyle who outsnapped (331 to 164) and out-targeted (32 to 22) Ebron in games both were active? Or, could this team support two fantasy-relevant tight ends?

To answer the last question first, it’s possible but, historically speaking, quite unlikely. As far as our other questions go, Ebron is the safer bet to outscore Doyle, but Doyle is the one worth drafting at ADP (TE7 vs. TE22). 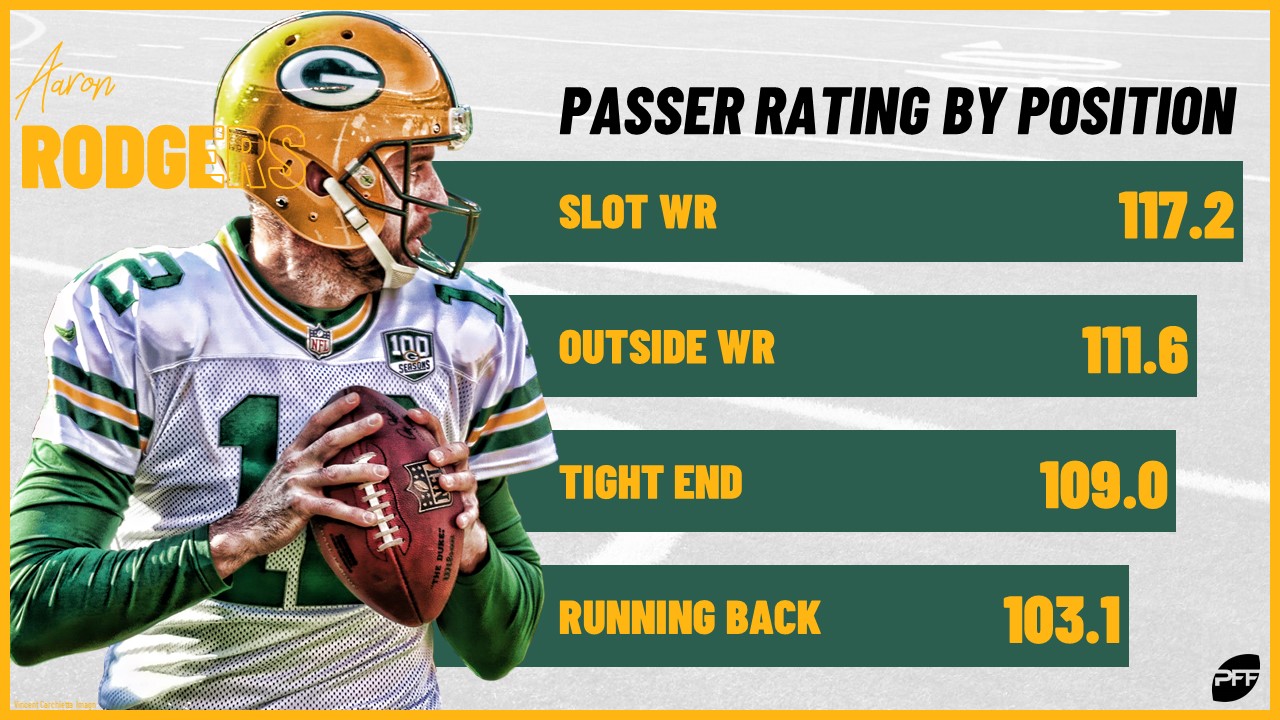 Rodgers leads all quarterbacks within our sample in overall passer rating (111.6) and also passer rating when targeting wide receivers. Like in our article focusing on volume, I think this speaks to some untapped potential in Green Bay’s offense. Wide receivers make up 61% of Rodgers' targets (one of the five-highest rates within our sample) but also 71% of his passing yards and 75% of his passing touchdowns.

Take all of this as an encouraging sign for Davante Adams (the No. 1 wide receiver in my rankings) and whichever wide receiver you might want to draft after him. In our last article, I wrote, “Since Aaron Rodgers was named the starter in 2008, Green Bay’s second-most-targeted wide receiver has yielded two WR1 seasons, four WR2 seasons, two WR3 seasons, and two WR4 seasons for fantasy. All Green Bay wide receivers after Adams are being drafted in the eighth round or later.”

Similarly, given Russell Wilson’s impressive efficiency numbers at every position, Tyler Lockett and a receiver-to-be-named-later could be screaming ADP values, even if target-volume is still hard to come by. 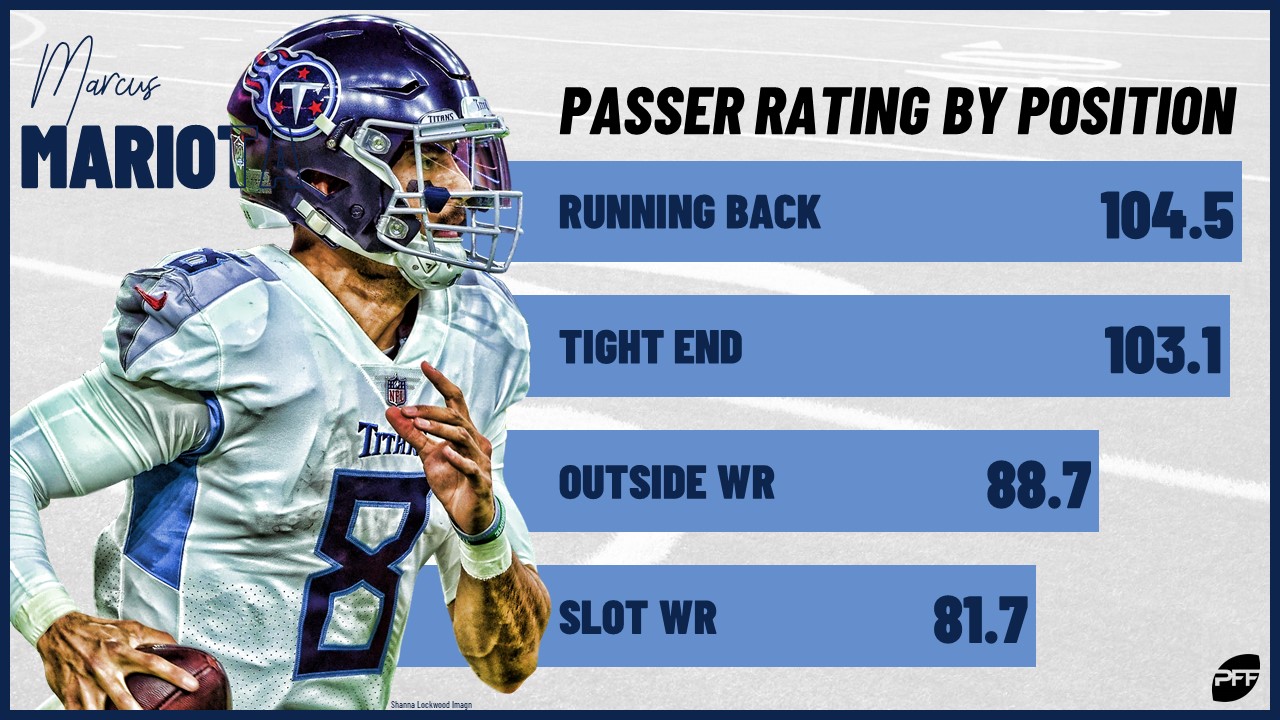 Although Mariota hasn't been very effective when targeting tight ends (eighth-worst) or outside wide receivers (eighth-worst), he's been especially bad when targeting slot wide receivers (worst). This could be related to poor roster talent at the position, or it could be bad news for Tennessee’s new slot wide receiver Adam Humphries. I’d bet Humphries hadn’t looked at this chart before forsaking Tom Brady (fifth-best) and New England’s more lucrative offer to play in Tennessee.

In April, the Jaguars selected tight and Josh Oliver with the 69th overall pick. Following the selection, offensive coordinator John DeFilippo was asked how much Foles’ love of targeting tight ends factored into the team’s decision to draft Oliver. DeFilippo responded simply, “Huge.” 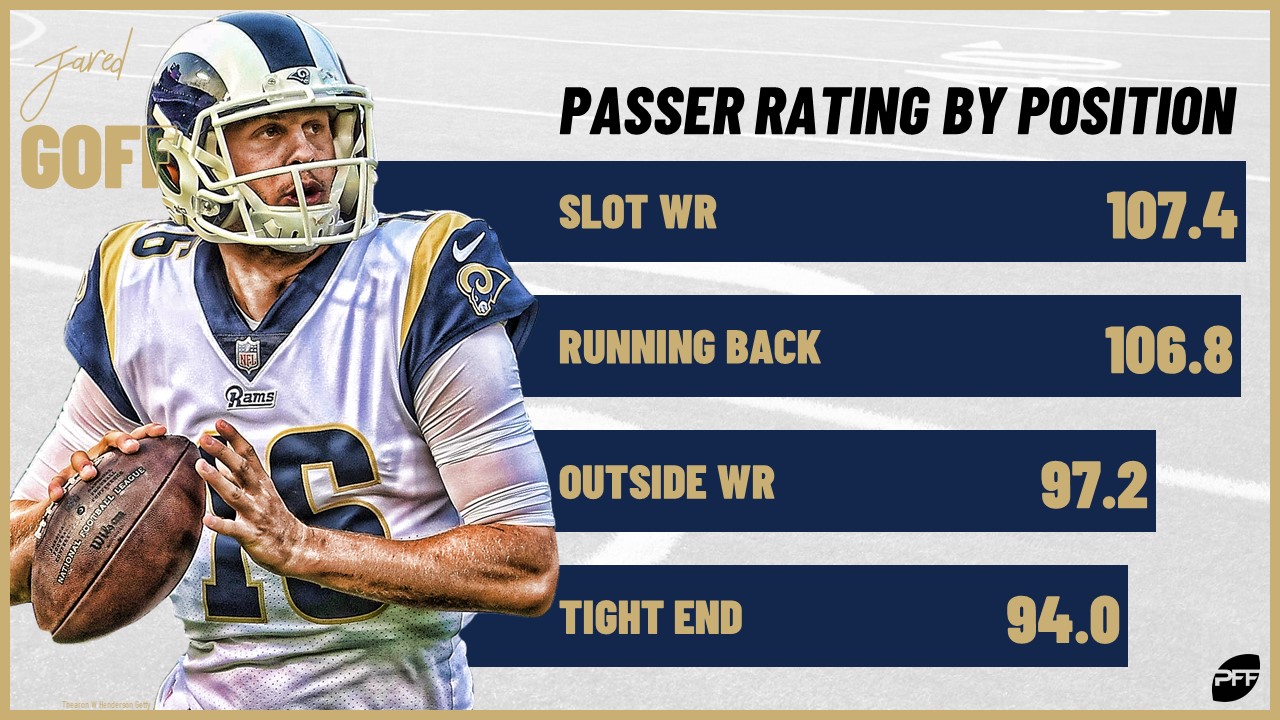 Goff was terrific when throwing to running backs (best) and wide receivers (top-seven) but has historically struggled when targeting tight ends (second-worst). Gerald Everett and Tyler Higbee were never high on our fantasy radar but this is another vote against a potential 2019 breakout.

To a lesser extent, Stafford also struggled when targeting tight ends, and his rating doesn’t jump too much when looking only at balls thrown to Eric Ebron (94.1). Perhaps this is a reason to be skeptical over T.J. Hockenson’s current dynasty ADP (TE7), or that he or Jesse James might heavily eat into the volume of Detroit’s wide receivers in 2019.