With no NFL Scouting Combine this season, player measurables and testing numbers are all coming out of individual pro days. We know from research by PFF’s Eric Eager that pro day data is more favorable to players than combine data — especially when it comes to the granddaddy of all workouts: the 40-yard dash.

With the lack of consistent, comparable data, there's never been more noise around pre-draft player workouts. But that doesn't mean the data isn't useful. Even if there are some caveats to the data coming out, players are still going offer both standout performances and others that cause concern.

Let's take a look through some of the numbers so far to find players whose pro-day testing has influenced their draft stock — for better and for worse — in NFL mock drafts and 2021 fantasy football rookie rankings.

One of the biggest risers in the latest edition of PFF’s 2021 NFL Draft Guide, slot receiver Elijah Moore‘s 40-yard dash ranked fourth and his short shuttle/three-cone third among 2021 draft class WRs who tested at their pro days. He's up to No. 20 overall on PFF’s Big Board.

Moore is building a case as one of the best pure slot receivers in this class. He exploded onto the scene at just 19.5 years old, earning a 46% dominator rating in his second collegiate season after D.K. Metcalf and A.J. Brown took their talents to the NFL.

Moore's sophomore campaign put him firmly on the radar for NFL teams, but it wasn’t until this past season that he took the next step. On 11 fewer targets in 2020, Moore posted 365 more yards. His PFF grade (92.4 versus 79.5) and yards per route run (3.65 versus 2.34) increased substantially. Those marks both rank inside the top three among all 2021 draft-eligible receivers.

It’s still unclear whether Moore can make the transition to perimeter receiver, but I assume the team that drafts him will utilize him as their primary slot receiver. PFF’s Sam Monson believes Moore would make almost every team in the league better from the slot, and I agree.

Slot-needy teams drafting in the back half of the first round — like the Tennessee Titans, New Orleans Saints, Green Bay Packers and Kansas City Chiefs — are all great fantasy landing spots for Moore.

The talented wide receiver is also building steam among the NFL mock drafts — Grindingthemocks.com has him pegged as the WR7. I’ve moved him up in my rookie wide receiver rankings one spot ahead of Rondale Moore.

It’s razor-close between the two Moores in my rankings; NFL landing spot will be the final deciding factor. 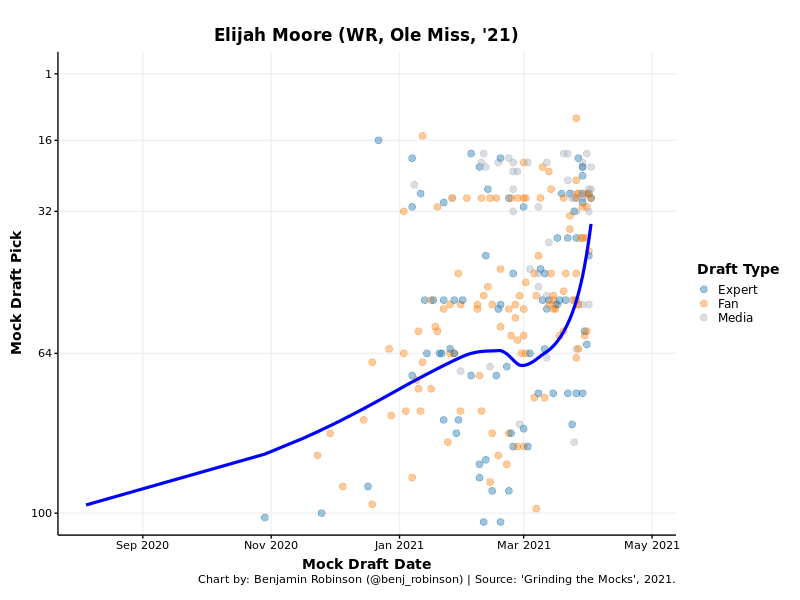 Terrace Marshall Jr. was the cover boy for my recent article highlighting incoming rookies who saw extremely high shares of their team’s end-zone targets. That’s shown to be somewhat predictive for college WRs entering the NFL.

Testing well during pro days also helps, and Marshall did exactly that. Despite most of the media attention going toward teammate Ja’Marr Chase — the No. 1 ranked rookie wide receiver by consensus — Marshall turned heads himself.

The 20-year-old ran a 4.38 40-yard dash — the same time as Chase but at a larger size (6-foot-3 and 205 pounds). With confirmed dual-threat size and speed, Marshall has a chance to ascend to #alphastatus on an NFL roster. He has a large catch radius that will help him vacuum up targets over defenders, especially in the red zone.

And although he spent the majority of his time in the slot in 2020, I don’t envision him playing the “big slot” role in the NFL. The LSU product has the requisite traits to be a proper alpha wide receiver on the outside, so I doubt we see him moved back into the slot.

Marshall has made the biggest jump in my rookie WR rankings, leapfrogging Tylan Wallace and both Moores to WR5.

Like Elijah Moore, Marshall projects to be drafted somewhere in the back-end of the first round, which means he has a great chance to land somewhere he can see immediate opportunity playing with an above-average passer. 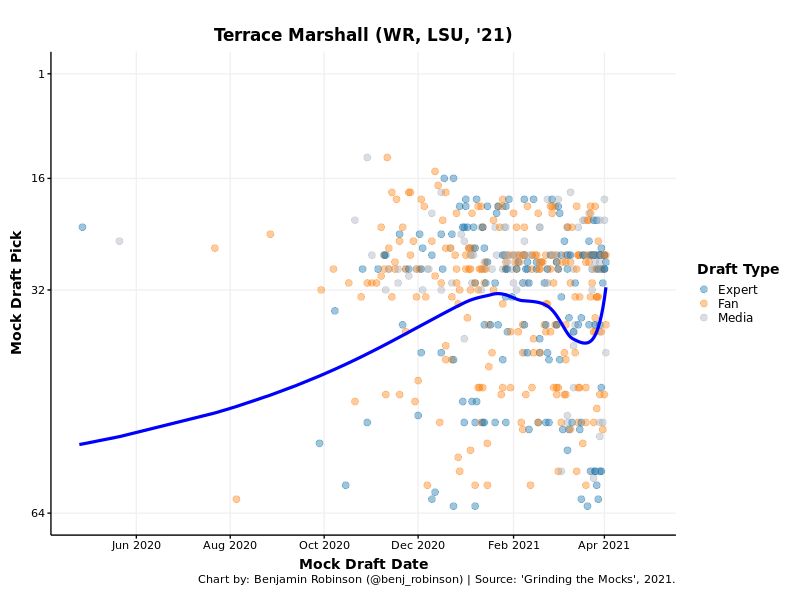 My fourth-highest-ranked rookie running back, Kenny Gainwell, gets a boost after weighing in over 200 pounds at his pro day. That's encouraging for his prospects at the next level after the pass-catching specialist was thought to be around 190.

Due to his smaller size, we aren’t likely to see Gainwell become a workhorse back at the next level, but the fact that he added some extra weight could help him earn more touches on early downs.

That easily solidifies Gainwell as the RB4 pre-draft behind the “Big Three.” He has some of the best pure receiving chops in the class, which is going to make him a fantasy asset.

In 2019, Gainwell ranked fourth in PFF receiving grade (85.0), fourth in receptions (51), first in receiving yards (610) and second in missed tackles forced (20) on receptions among running backs.

Per Grindingthemocks.com, Gainwell is being drafted as the fourth running back, with an expected draft position of 66.

My biggest knock on wide receiver Nico Collins is his inability to create route separation, but the workout metrics he posted at his pro day offer signs of hope that his year off from football in 2020 paid off.

Grindingthemocks.com has Collins as the 15th wide receiver off the board.

His Michigan teammate, running back Chris Evans, also tested extremely well, running a 4.44 40-yard dash and hitting 40.5 in the vertical jump. The jump was the highest among all RBs tested in the draft class.

If Elijah Mitchell doesn’t become a fully entrenched bell cow at the next level, he has other merits to fall back on. He cut weight and flashed his explosiveness at Louisiana-Lafayette’s pro day.

The former Ragin Cagin’ blazed an unofficial 4.38 40-yard dash (96th percentile) and a 128-inch broad jump (93rd percentile). Nearly all of Mitchell’s testing numbers were off-the-charts good compared to the rest of this year’s running back class.

Mitchell’s broad jump matched Travis Etienne’s to lead the class, demonstrating his speed and explosiveness. That in itself is worth taking a flier on in the late rounds of best ball and dynasty rookie drafts.

Mitchell’s dramatic rise to RB7 means that other running backs have fallen slightly. Chuba Hubbard and Jermar Jefferson are two who fell.

Hubbard was known as a world-class sprinter in college, but his 40 time didn't show it. His weight was up slightly, from 207 to 210.

I wasn’t expecting Jefferson to be a burner or standout athlete, but I thought he’d test better than sub-50th percentiles across the board. Without above-average workout metrics, Jefferson could fall to Day 3 and enter the NFL without a ton of opportunity.

Per Grindingthemocks.com, Hubbard is being selected as the RB8 (133 pick) and Jefferson isn’t currently ranked.

Tutu Atwell has been my 10th-ranked rookie WR throughout the pre-draft process — he stacks up well in the 2021 NFL Draft class in dominator rating and breakout age. He's also been hyped up by NFL talking heads as a potential top-50 player.

After a lackluster pro-day performance, I’m concerned that Atwell could also fall to Day 3. The so-called “speedster” underwhelmed in the testing drills, highlighted by a 4.42 40-yard dash that leaves a lot to be desired from a prospect that weighed in at a meager 155 pounds.

If a receiver is going to enter the NFL at 155 (zero percentile), then he better be running in the low 4.3s. Atwell's game is predicated on speed and explosiveness, yet neither stood out in his workouts.

When I first learned of Atwell’s weight and 40-yard dash time, I tried to generate a comparison to another receiver that weighed that little entering the league. The first guy who came to mine was Brandon Banks — a 2010 UDFA for Washington. Banks weighed 149 pounds and ran a 4.33. He went on to become a monster in the CFL.

Marcus Mosher compared Atwell to J.J. Nelson, who weighed in at 156 pounds and ran a 4.28 at the NFL Combine. Nelson ended up being a fifth-round pick.

Tutu Atwell will be the lightest wide receiver drafted into the NFL (155 pounds) since 1999.

Considering both Banks and Nelson ran their 40s at the NFL Combine instead of their pro days — where times are usually going to be slower — Atwell’s draft stock is likely to suffer.

He is going to be typecast as a slot guy in the NFL, and that is going to limit his overall usage. I’d say the best-case scenario is that Atwell becomes a boom-or-bust fantasy WR3/4 like Marquise Brown or Mecole Hardman. Those two were both top-60 selections, which seems like a pipe dream for the rookie from Louisville. Atwell is not worth an early pick in dynasty rookie drafts.

I also found it somewhat strange that the Cardinals didn’t feature Atwell as a kick/punt returner based on his speed profile. He failed to crack my list of the most dynamic and versatile rookies, another knock on his profile.

The lack of explosiveness and speed doesn’t bode well for Larry Rountree. His 40-yard dash and jumping numbers “pop” off the page, but not in the way fantasy managers would like.

I can’t see Rountree's role in the NFL as anything other than as a plodding, goal-line back.