This article is long so I’ll spare you a lengthy intro. Here’s everything you should need to know in order to dominate your Week 15 DFS tournaments and cash games.

Note 1: All numbers in parentheses refer to a player’s salary rank on each site.
Note 2: We’re only looking at the main slate plays on DraftKings and FanDuel (Monday, Saturday, and Sunday night games are excluded.)
Note 3: Your author is under the weather and apologizes for this article being less comprehensive than normal. 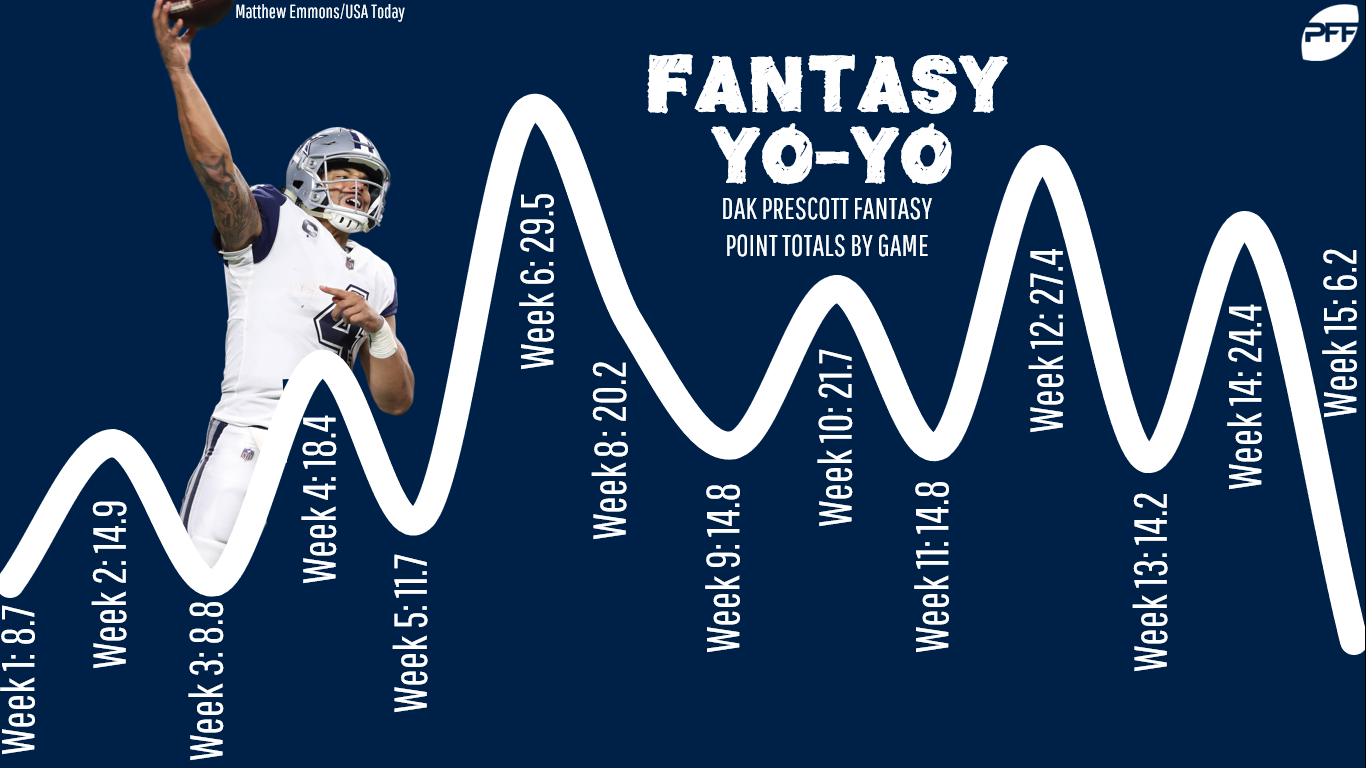 Quarterback is tricky again this week, but Prescott is the clear top value on both sites. He’s the 14th-highest-priced quarterback on both sites, but ranks fifth among all slate-eligible quarterbacks in my rankings. He should also draw low ownership after last week’s dud. Tampa Bay is giving up a league-high 37.0 points per game on the road this year, and Prescott has also been much better at home. It’s no surprise then that Vegas is spotting them their highest implied point total of the season at 7.8 points over their per game average. Over the full season, Tampa Bay ranks fourth-worst in fantasy points allowed per game, second-worst in fantasy points allowed per dropback, and worst in opposing passer rating. Despite flopping last week, Prescott still ranks fourth-best in fantasy points per game (20.8) since Week 6.

Other: Matt Ryan (DK: QB9, FD: QB2) is a top play on DraftKings this week, and so is (as gross as it sounds) Taylor Heinicke (DK: QB45, FD: QB26) at stone-minimum. The Falcons are giving up the most fantasy points per game to opposing quarterbacks and Panthers are giving up the fifth-most (schedule-adjusted) over the last five weeks. Vegas says this game has shootout potential (spread within +/- 3.0) and though Heinicke is an unknown, Ryan quietly ranks third at the position in fantasy points per game. Ryan might be my favorite play at the position on DraftKings this week and Heinicke is risky but makes sense as a salary saver. … Drew Brees (DK: QB3, FD: QB4) and Ben Roethlisberger (DK: QB1, FD: QB1) are in play given their established tournament-winning upside and the lofty over/under in their game. … Since returning from injury in Week 12, Josh Allen (DK: QB13, FD: QB12) leads all quarterbacks in fantasy points scored. This week he gets a New England defense that ranks fifth-worst in schedule-adjusted fantasy points per game allowed to opposing quarterbacks. The two mobile quarterbacks they faced (Mitchell Trubisky and Deshaun Watson) combined for 14 carries, 121 yards, and a touchdown on the ground. … Andrew Luck (DK: QB7, FD: QB5) deserves consideration given his production throughout the season, but I’ve faded almost every quarterback against the Giants this year and have been better off because of it. … Baker Mayfield (DK: QB9, FD: QB11) gets a soft Bengals pass defense (second-most fantasy points per game allowed) but I bet the Browns go run-heavy, as usual. 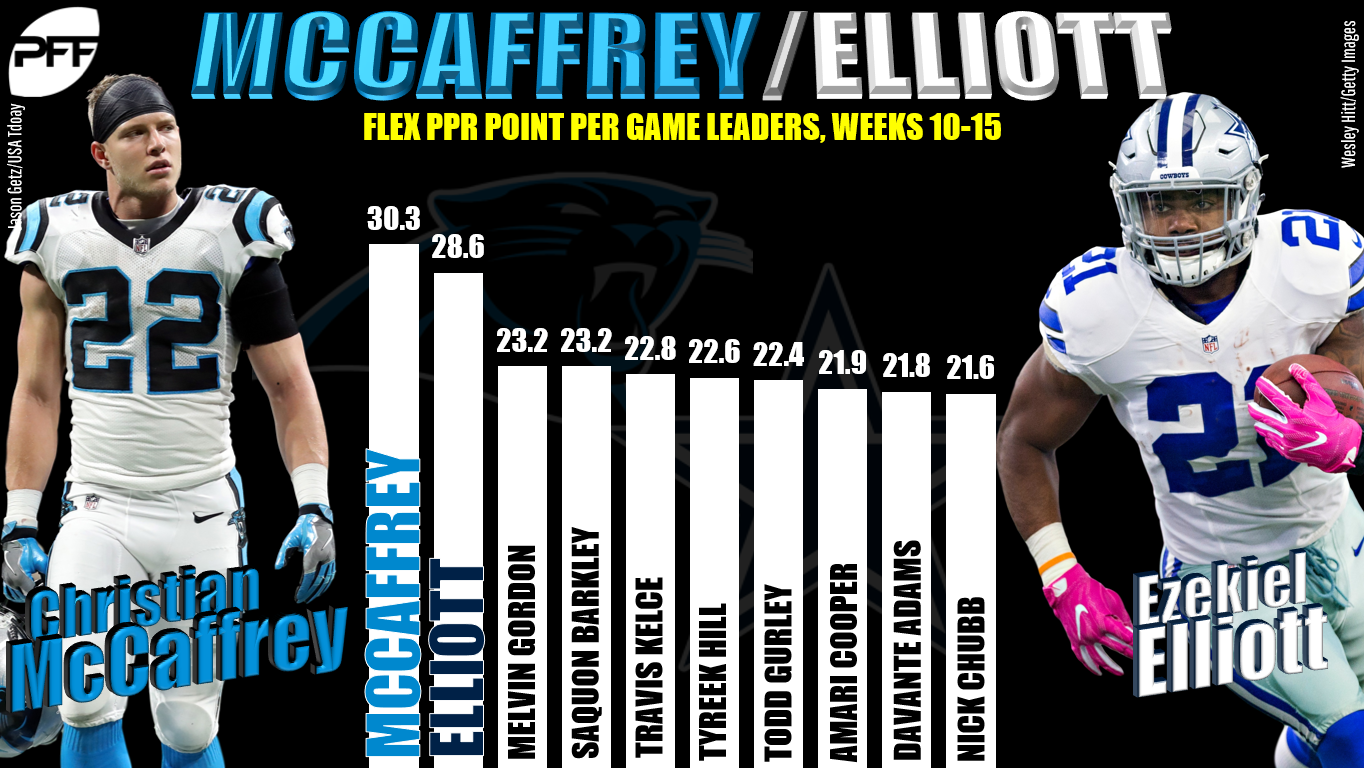 Gurley’s injury leaves me off him outside of as a potential contrarian play. Over the past six weeks, Elliott and McCaffrey rank first and second (and by a significant margin) among all players in both expected and actual fantasy points per game. McCaffrey was more productive, while Elliott has seen the better usage (and really all-decade great levels of usage). Ideally, Elliott will draw lower ownership this week, after a somewhat disappointing outing last week. That was his absolute floor (19.8 fantasy points) in a surprise shutout. This week, Vegas is giving Dallas a 27.5-point implied total (7.8 points above their point per game average) up against Tampa Bay, who are giving up the fifth-most fantasy points per game to opposing running backs. McCaffrey (the league’s best pass-catching running back) gets an ideal matchup as well, up against an Atlanta defense that has given up the most receptions to opposing running backs in every year of Dan Quinn’s head coaching tenure. They also rank worst in schedule-adjusted fantasy points per game to opposing running backs. I suppose  Heinicke starting dings McCaffrey, but I’m not sure it’s by much at all.

From the Week 16 Actual Opportunity report:

In two games without Conner, Samuels has played on 71% of the team’s snaps and totaled 90% of the team’s RB expected fantasy points. Despite failing to find the end zone in both games, he ranks 13th in both expected (16.2) and actual fantasy points per game (17.7). By all accounts, the matchup is tough, but the over/under is high (highest on the slate by 4.5-points) and Samuels should be held afloat by heavy target volume.

With Aaron Jones out, Williams is likely to assume the bell-cow workload he saw last week (87% of the snaps) and at the tail end of last year. From Week 11 to 17 in 2017, Williams played on 91% of the snaps. Over that seven-game span, Williams averaged 18.7 carries, 4.7 targets, 18.3 expected fantasy points, and 19.0 actual fantasy points per game. By all accounts, these are RB1 numbers. Keep in mind, Aaron Rodgers played on only 15% of the snaps over this span. So, even if Rodgers sits (unlikely), Williams will still be a top value.

Over the last two weeks, McGuire has played on 74% of the snaps, while ranking top-15 among running backs in both expected (17.0) and actual fantasy points per game (16.7). He comes off of a tough matchup against Houston (second-best in yards allowed per carry) to face a more neutral Green Bay defense this week. 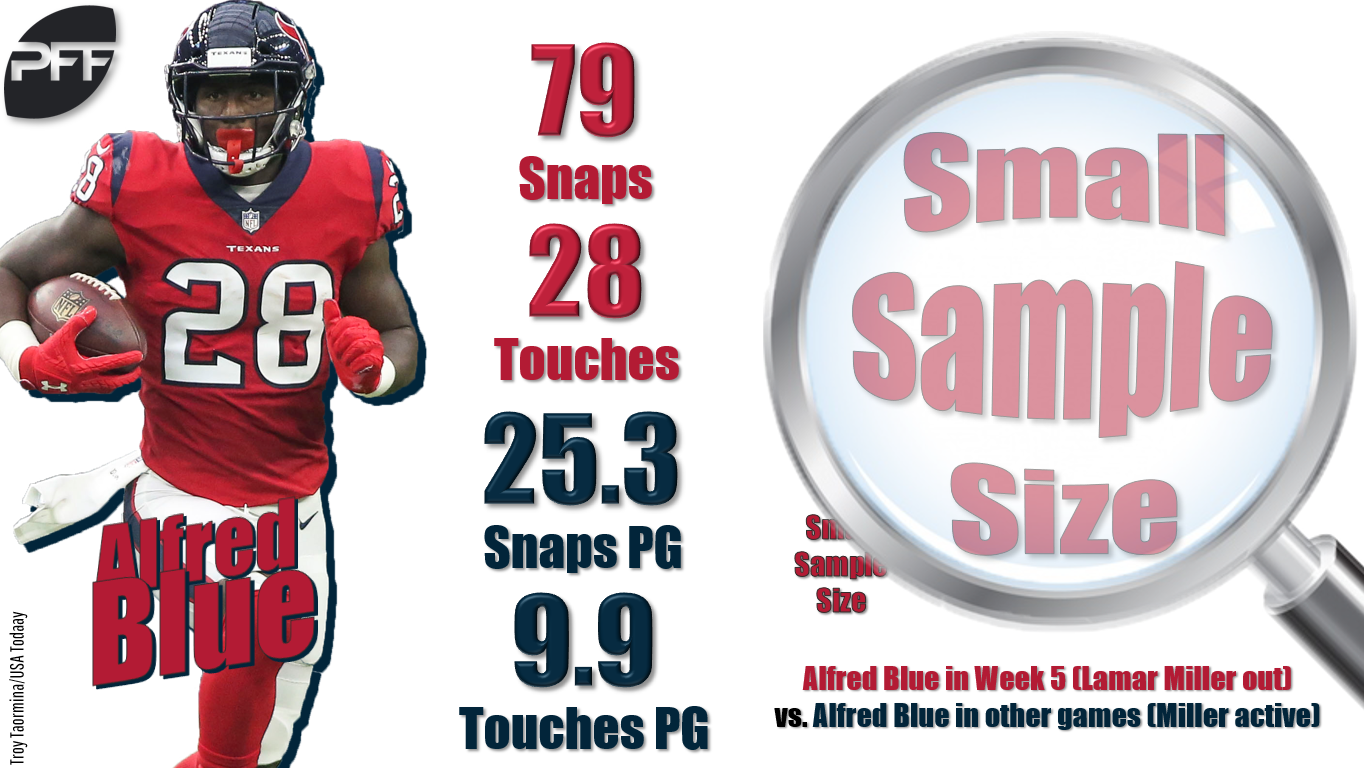 Lamar Miller played on only 11 snaps last week, while Blue played on every snap but one following his exit. In total, Blue saw nine carries and two targets. The last time Miller sat out (Week 5), Blue played on 79 of 80 snaps, while drawing 20 carries and eight targets. That week, he ranked fourth in expected fantasy points (23.9), with decent production, scoring 19.9. If Miller sits, I’m expecting a bell-cow workload from Blue once again, against a Philadelphia Eagles defense that is giving up the most schedule-adjusted fantasy points per game to opposing running backs (and by a landslide) over the last five weeks.

Adams gets a Jets defense that ranks worst in schedule-adjusted fantasy points per game (over the full season and over the last five weeks). Despite having what’s probably been the league’s toughest cornerback schedule, Adams has been one of the league’s most productive and most consistent fantasy players. Now he gets an ideal matchup. If paying up for a wide receiver, Adams is my top option. 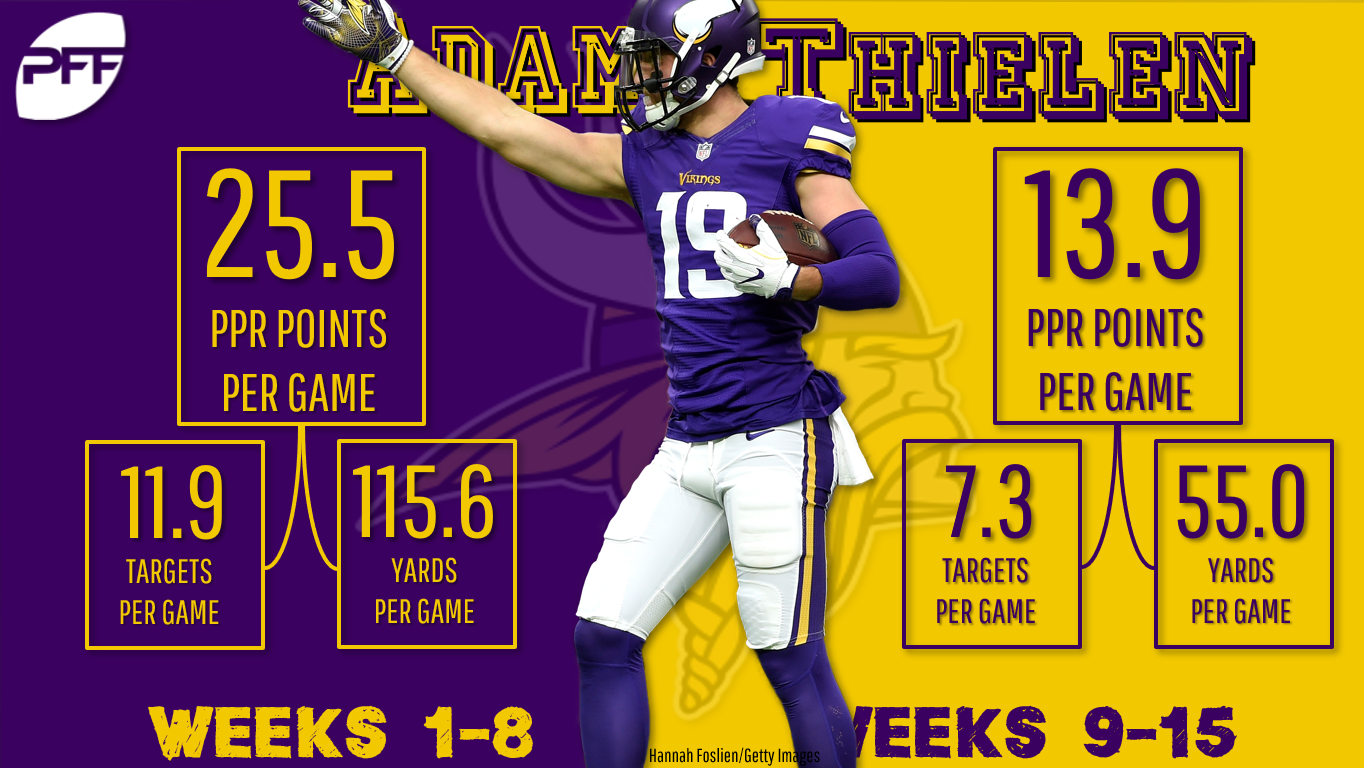 Thielen led all wide receivers in fantasy points per game (25.5) through the first eight weeks of the season but ranks just 22nd (13.9) since Week 9. He’s also coming off of his worst outing of the season – a two-target, 3.9-point game against the Dolphins. Though risky and only in play as a contrarian option, I see this as a “get-right” spot for him. With Stefon Diggs in shadow coverage against Darius Slay, Kirk Cousins would be wise to lean heavily on Thielen up against a Detroit defense that is allowing the seventh-most fantasy points per game to opposing slot wide receivers.

Cooper was fantasy’s most boom-or-bust player in 2017, and he’s reprised that role in 2018. He “boomed” in Week 14 and then “busted” in Week 15, but his fantasy point per game average (21.9) since joining the Cowboys still ranks third-best at the position. We should be seeing another “boom” game from him this week, up against a Buccaneers defense that ranks second-worst in schedule-adjusted fantasy points per game allowed to opposing WR1s. He’s also still way too cheap on FanDuel.

Over the last four weeks, Pettis ranks seventh at the position in fantasy points (18.7), while averaging 84.5 yards and 1.0 touchdown per game. His lack of volume over this span (5.5 targets per game), implies a looming regression, but he might still be a strong value. He’ll also go overlooked with many DFS players thinking this matchup is much worse than it is. The Bears are giving up the third-most fantasy points per game to opposing left wide receivers (where Pettis runs 44% of his routes).

Over the last four weeks, Foster ranks seventh among wide receivers in actual fantasy points per game (14.8), but just 59th in expected fantasy points per game (8.6). This implies an impending regression to the mean, but it’s also hard to ignore that level of production. Additionally, he should also see an increase in targets this week, with Zay Jones likely to draw shadow coverage from our top-graded cornerback (Stephon Gilmore).

Other: The production hasn’t been there for Josh Reynolds (DK: WR22, FD: WR36) in recent weeks, but volume has been strong since the team lost Cooper Kupp in Week 10. Over this span, he averages 16.0 expected fantasy points per game, ranking 13th among all wide receivers. He’ll be a low-owned boom-or-bust value play against Arizona this week. Target-volume should be better than typical too, with Brandin Cooks likely to be shadowed by Patrick Peterson. … Believers in the backup connection should keep an eye on Curtis Samuel (DK: WR34, FD: WR27). This preseason, Samuel was Taylor Heinicke's favorite receiver. He saw a 25% target market share and a 38% yardage market share when Heinicke was under center… Julian Edelman (DK: WR11, FD: WR15) is a better play than typical with Josh Gordon gone. He’s priced below his average score on both sites and will be avoiding Tre’Davious White in the slot – where Buffalo is giving up the 12th-most fantasy points per game.

Ertz has been less productive with Nick Foles under center, but volume has been significantly better than with Carson Wentz. This week he gets a Houston defense that ranks fourth-worst in schedule-adjusted fantasy points per game to opposing tight ends.

Kittle is a tough sell against Chicago, but still warrants consideration. Since Week 10, he ranks 13th among all receivers in targets per game (8.8) and 14th in fantasy points per game (16.8). Among tight ends, only Travis Kelce ranks higher.

Ebron is probably the best value overall, but is not without risk, coming off of a 1.8-point performance in a run-heavy blowout against Dallas. His matchup against New York should have a similar outcome. Still, if only counting games without Jack Doyle, Ebron ranks first among tight ends and 10th among all receivers in expected fantasy points per game (16.9). He has heavy touchdown upside in a week Indianapolis should be gifted plenty of good field position and red zone drives, but also carries a good deal of risk. 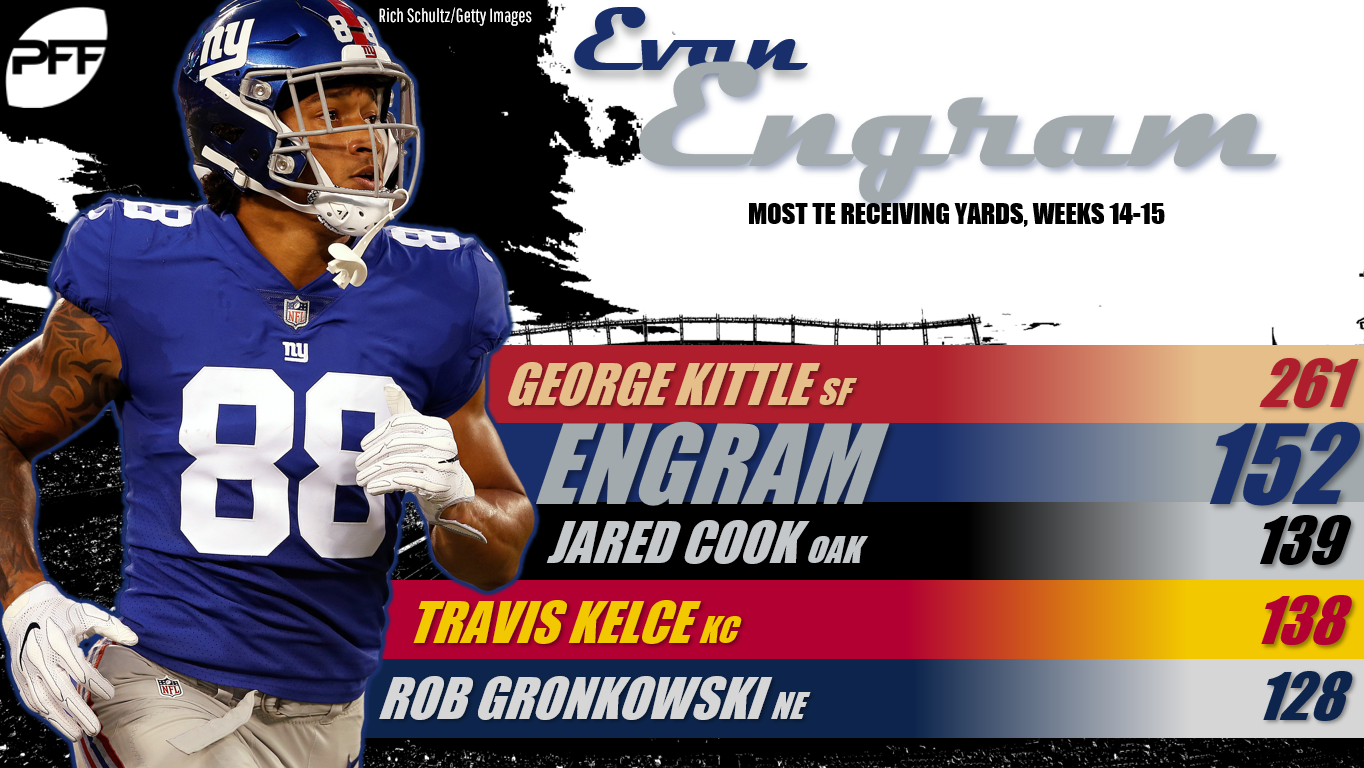 Over the last two weeks with Odell Beckham Jr. out, Engram leads the team in targets by four (17 total) and receiving yardage by 98 (152 total). With Beckham out again, I like Engram’s chances at another big game this week. Indianapolis ranks second-worst in schedule adjusted fantasy points per game allowed to opposing tight ends (both over the full season and over the last five weeks).