We’re now 68 days away from the NFL season opener, which means best-ball leagues are going to continue to dominate the majority of all fantasy drafts that take place over the next month. With this in mind, I wanted to pay special attention to an important but under-discussed component of fantasy football – consistency.

Last season, T.Y. Hilton played in all 15 games during the fantasy season (Weeks 1-16), but somehow, scored 51 percent (most among all players) of his total fantasy points in just three of these games. Outside of these games, Hilton averaged just 7.1 fantasy points per game (would have ranked 72nd among wide receivers). This means he was mostly useless for those of you who owned him in typical redraft leagues – it was highly unlikely you were lucky enough to start him in just the weeks he was valuable (Weeks 3, 5, and 9), and otherwise, he hurt you when you did start him. Even in best-ball leagues he was a bust at ADP (WR13), but at least his volatility wouldn’t have hurt you as much. (In best-ball leagues there are no start/sit decisions and your highest-scoring players automatically slide into your starting roster at the end of the week.)

With Hilton and best-ball leagues in mind, I wanted to look at 2017’s least and most consistent scorers for fantasy.

Tristan Cockroft does this every year for ESPN, as does John Paulsen for 4for4. I’m going to approach this in a similar way to Paulsen. We’ll be looking at every player in every week over the course of a full fantasy season (excludes Week 17). We’ll then calculate a player’s standard deviation – to determine how much variation there was in their fantasy scoring on a week-to-week basis. Then, we’ll standardize these scores across scale by dividing a player’s fantasy points per game average into their standard deviation, to determine that player’s coefficient of variation. (You can calculate this yourself, with a little bit of effort and if you’re a PFF Edge or Elite subscriber, by using our fantasy stats.)

Among all non-quarterbacks (min. 10.0 fantasy points per game), here were last season’s top-20 least-consistent fantasy scorers by coefficient of variation:

(This is our first look at fantasy consistency, simply diving in on fantasy points scored. It's really a toe-in-the-water look, as using fantasy points makes a study very subject to touchdown luck. But it's a good starting point. In our next piece we'll look at consistency of role and usage, which takes this a step further.) 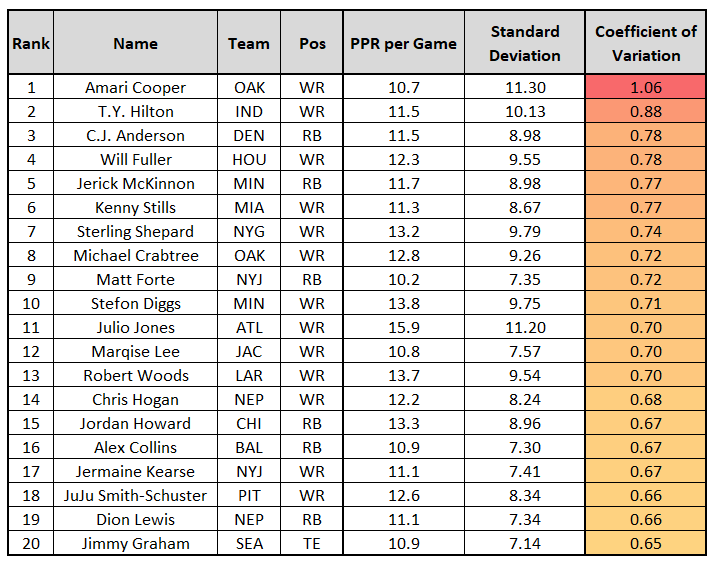 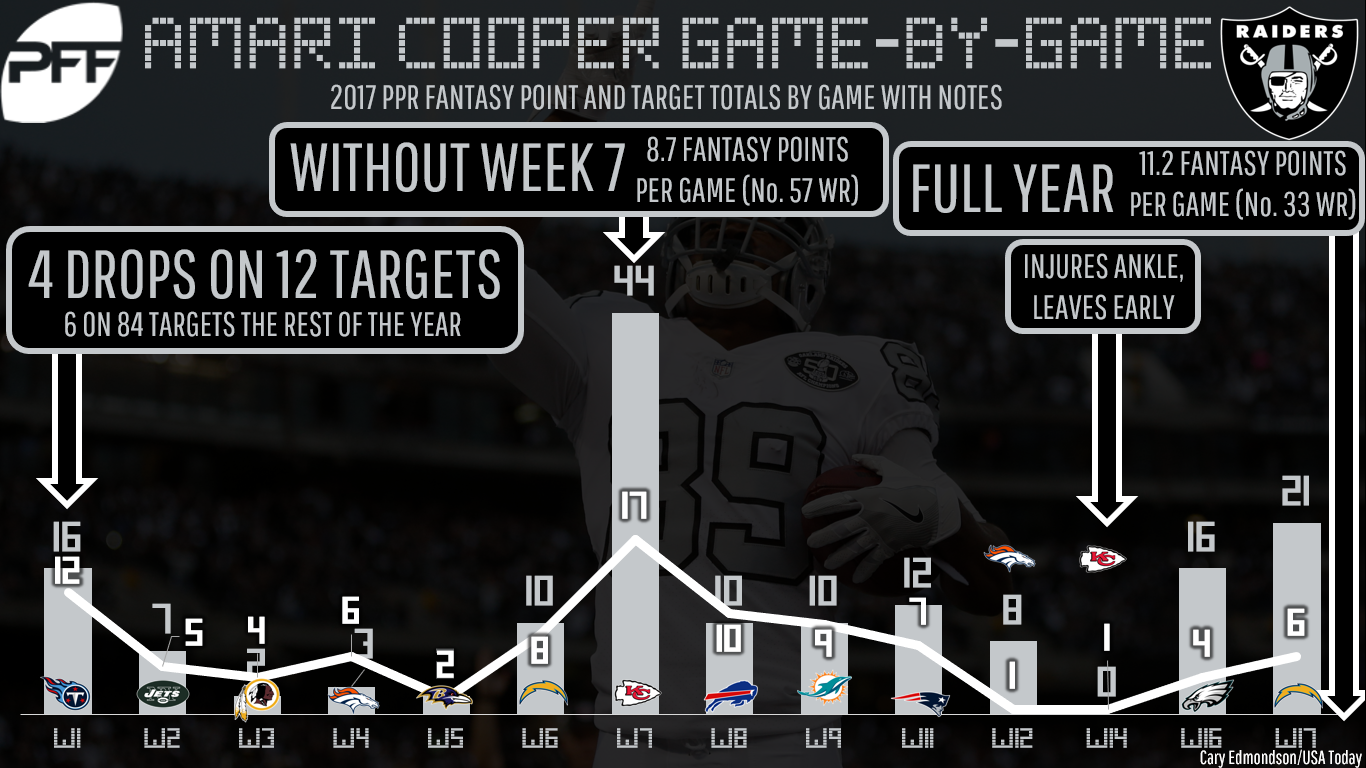 We used Hilton as our benchmark of inconsistency in the intro, but actually, Cooper was even more inconsistent last season. Cooper missed only one game during the fantasy season but scored a whopping 31.7 percent of his fantasy points in just one game (44 fantasy points in Week 7). If we exclude that one game, he would have fallen from 10.7 fantasy points per game (31st among wide receivers) to 7.9 (63rd). (This is different from the above graphic because I include the fantasy season –through Week 16 — and the graphic includes all of 2017.) We went more in-depth on Cooper’s 2017 season and his prospects for the 2018 season here.

Fuller ranked as our third-least-consistent wide receiver last season. This is partly due to the nature of his role (deep-ball specialists are typically more high-variant than their peers) and partly due to the difference in quarterback play he was saddled with throughout the season (from Deshaun Watson to Tom Savage and T.J. Yates). He also scored a whopping seven touchdowns on only 28 receptions, which implies a massive regression to the mean next year. That’s the bad news. The good news is Fuller actually ranked second-best among wide receivers in fantasy points per game (21.0) during the weeks Watson was active, and now has an ADP of just WR30. I suspect he’s slightly overpriced in redraft leagues but is a decent value in best ball.

Stills ranked top-30 among wide receivers in fantasy points last season but probably didn’t contribute that sort of value to your team. 45 percent of his total fantasy points came in just three of his games, despite not missing a game all year. Stills, like Fuller, found his way onto this chart due to the unique nature of his role (deep-ball specialist). As I wrote here, 48.3 percent of his fantasy points have come on deep targets over the past two seasons, which ranks most among all wide receivers with at least 150 targets over that span. Again, like Fuller, he’s also probably due for some touchdown regression, ranking seventh among wide receivers in receiving touchdowns (15) but 29th in expected touchdowns (9.4) over that stretch. Still, he’s a much better best ball value than Fuller at ADP (WR50).

Among wide receivers, Woods ranked 18th in fantasy points per game but only 29th in targets per game. I suspect this hyper-efficiency is to blame for Woods’ lack of consistency. With Los Angeles trading a first-round pick to acquire Brandin Cooks, the Rams’ receiving corps feels even more muddied now than it already was. That being said, Woods is still a decent value at ADP (WR37), and even outside of best ball leagues.

Other notes: I wouldn’t worry too much about someone like Jerick McKinnon’s ranking here. He was used as a game script-sensitive scatback last season but should be used as more of a bell cow next year. … On the other hand, Jordan Howard and Alex Collins are likely to be similarly inconsistent next year, due to game script having the potential to take them out of games (because they aren’t often used in obvious passing situations). … Sterling Shepard’s ranking is likely mostly related to an early exit in Week 5 and an increase in target volume following the injuries to Odell Beckham Jr. and Brandon Marshall. … Similarly, Dion Lewis made this list due to a drastic change in usage following the incompetence of Mike Gillislee and an injury to Rex Burkhead. … I suspect both Michael Crabtree and Jimmy Graham made this chart because they led their respective positions (min. 75 targets) in percentage of fantasy points scored on touchdowns. Of course, this means they’re more volatile on a week-to-week-basis.

For comparison, here were last season’s top-20 most consistent fantasy scorers by coefficient of variation: 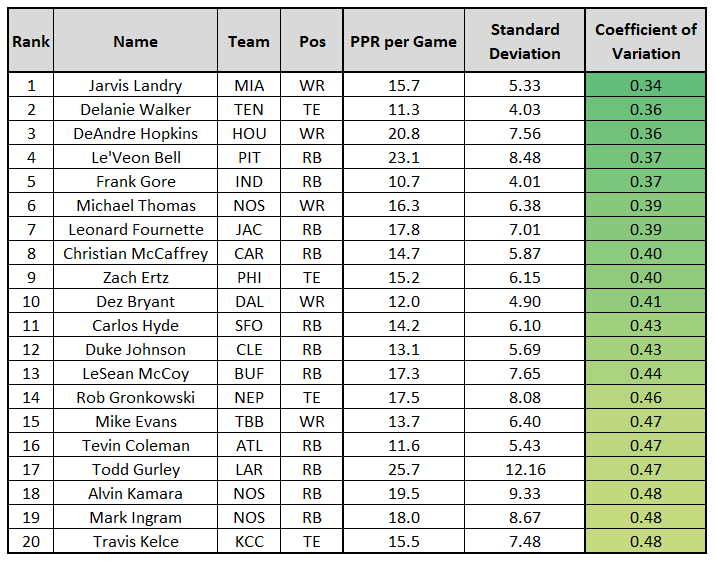 I won’t go too in-depth here, but I will note that almost all of these players also ranked highly in consistency of usage, which is a topic we’ll discuss in our next article.

Finally, as a bonus aside, I wanted to look at positional consistency. Looking only at the top-20 highest-scoring players at each position, here’s how each position fared in terms of coefficient of variation. The quarterback position was the most-consistent, followed by wide receivers, then tight ends, and then running backs.