It’s Week 8 of the NFL season, and several backfields are in the midst of significant shakeups that alter the running back landscape for fantasy football. Not that I’m prescient or anything, but last week in this space I laid out the writing on the wall for Carlos Hyde as a player to sell high, and the very next day he was shipped to Jacksonville.

Your fantasy league’s trade deadline may still be a few weeks away, but the NFL’s trade deadline is this coming Tuesday, and more shakeup could be on the way. We’re also now entering the apex of bye weeks, with a whopping 20 teams scheduled for some R&R over the next four weeks. What’s more, Week 7 added several more key fantasy RBs to the growing injury toll.

With so much fluidity across the running back position leaguewide, now is not the time to be complacent in trying to improve your team, whether via trade or the waiver wire. The aim below is to provide further context for those decisions, but as always you’ll want to check out Scott Barrett’s weekly starts and sits along with Jeff Ratcliffe’s waiver wire advice.

Before we dig into five running backs who are trending up and five who are trending down for Week 8, let’s take a quick look at how things panned out for the players we discussed last week.

Notes: If Hyde has only one week left of start-worthy fantasy usage, it might just be this week. Still, he’s best left on the bench if you can help it. … We looked at Tarik Cohen’s rising value here a few weeks ago, and since then, Howard owns our second-worst rushing grade and fifth-worst elusive rating. … Smith’s bottom-line yardage looks underwhelming, but it’s important to note that no RB with 30 or more carries has been given less room before contact (0.18 yards). He remains a good stash based not only on his workload split, but also because Tevin Coleman ranks dead-last in PFF rushing grade on the season. … Even with steady volume, Gore remains a touchdown-or-bust option, and he’s been a bust in that category. … I’m still not sure in what universe Hines was considered the Colts RB to own over Marlon Mack, who ranks fourth in fantasy points per opportunity since his return. … Ekeler was mentioned as trending down a couple days before Melvin Gordon was downgraded and, ultimately, declared inactive. Still, despite playing all but two snaps and logging career-highs in carries (12) and touches (17), Ekeler managed only 68 yards from scrimmage without a touchdown. … Lewis flat-out proved me wrong, turning in his best showing since the season opener.

James White was already entrenched as an RB1 in PPR formats, ranking sixth in fantasy scoring on the season. White is coming off a career-high 11 carries in the wake of Sony Michel’s knee injury and is on pace for 130 targets. His role is locked in, although the Patriots will now need to lean on Barner to propel the ground game. White ranks just 53rd out of 57 qualifiers in elusive rating this season, as he’s averaging just 1.58 yards after contact. No other RB with 40 or more carries has been given as much yardage before contact on average (3.2). Barner was thrust into action against Chicago for 17 snaps, and he got a career-high 10 carries and went out on six pass routes. One of those carries came inside the 5, tying White on the season. Figure on Barner being the between-the-tackles and short-yardage guy for as long as Michel is sidelined, a gig that certainly carries some fantasy appeal for a Patriots team that often plays from ahead.

It’s not widely talked about, but the Broncos are an elite run-blocking team. And while Lindsay leads Denver in rushing attempts (75), rushing yards (438) and yards per carry (5.8) through seven weeks, he’s seen only 36.5% of a three-way snap share. That percentage is about to go up, as Royce Freeman is dealing with a reported high-ankle sprain and did not practice Wednesday. Should Freeman miss Sunday’s bout with the Chiefs – which seems likely at this point — Lindsay becomes a plug-and-play RB2 in all formats, and possibly beyond this week. He’s also been utilized more in the passing game of late, with six catches for 48 yards against the Rams in Week 6 before grinding away last week’s blowout win over the Cardinals. 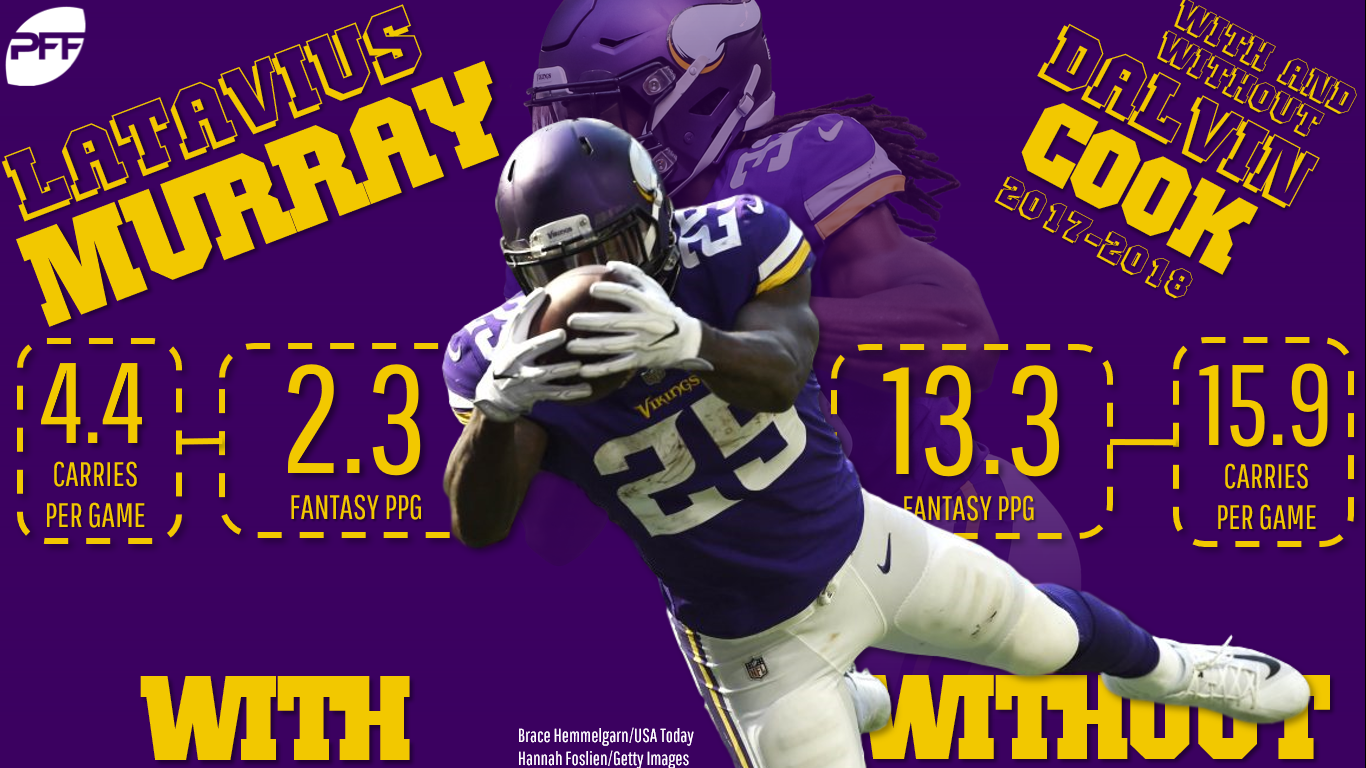 It’s shaping up to be a lost season for Dalvin Cook, and word is the Vikings may shut him down until Week 11 when they come out of their bye. Working as the Vikings’ bell cow sans Cook over the last two weeks, Murray has run for 224 yards and three scores on 39 carries (5.7 YPC), averaging 3.7 yards after contact with a 21% missed tackle rate in that span. Of course, we’ve been down this road before with Murray, who entered the season as a priority handcuff. When Cook got hurt last season, Murray was the RB9 in standard formats from Week 5 on despite splitting time with Jerick McKinnon. In 2016, Murray piled up 12 rushing scores with Oakland, and the year before that he was a 1,000-yard rusher. In other words, don’t make the mistake of discounting his recent success.

With Marshawn Lynch likely having played his last down as a Raider, it’s now up to Doug Martin and Richard to pick up the slack. You, me, and pretty much everyone besides Jon Gruden knows that Martin is no longer a capable featured back. However, because this is Gruden’s team, a featured back is exactly what Martin will be, at least for now. But given that the Raiders figure to be playing from behind quite often, Richard is the smart pick to own the rest of the way in PPR formats. Richard is a year removed from being the league’s third-most-elusive RB (90.7 rating) as a rookie, although his opportunities have been limited since. Still, he’s averaged 5.3. yards on 150 career carries, and he’s caught six or more passes in all but two games this season.

It’s certainly possible that a progressive offensive mind with Matt LaFleur’s track record will get things fixed over the Titans’ bye week. Frankly, there’s nowhere to go but up for a team that ranks 30th in points and yards per game, and 29th in plays per game. Lewis is precisely the type of multi-faceted player that LaFleur will look to utilize, and he’s coming off his most successful game of the season. In producing 155 yards on 19 touches against the Chargers, Lewis forced nine missed tackles and averaged 5.23 yards after contact, which led all RBs with at least 10 attempts this past week. Lewis has also, deservedly, begun taking over in crucial down-and-distance situations.

Yes, Barber was just trending up a week ago, coming off his best outing of the season and considering that most of his damage on the ground has come after contact (216 of 260 yards). However, Barber missed practice on Wednesday with an ankle injury that kept him sidelined for the fourth quarter against Cleveland, putting his Week 8 status in question. So, while Barber has yet to string together consecutive strong showings, he’s “trending down” mostly because any missed time will open the door for second-round pick Ronald Jones, PFF’s top-graded rusher in all of college football last season. Granted, Jones has done nothing special on his own accord… yet. Still, Barber simply doesn’t have the career track record to take his position on the depth chart for granted. It’s also worth noting that Barber is 0-for-3 in converting carries inside the 5.

Look, Fournette has trended nowhere but down since the opener, thanks to a nagging hamstring injury that has prevented him from getting through even one full game this season. But things have now entered a point of no, or at least minimal, return for panicked fantasy owners. Not only is he shut down through the Jaguars’ Week 9 bye, but Jacksonville’s recent trade for Carlos Hyde throws a whole new wrench in the works. All things considered, it’s fair to wonder if Fournette’s workhorse days are over after battling numerous lower-body injuries as a rookie and during his time at LSU.

Heavy volume masked some inefficiencies last year, as Fournette was just 44th in elusive rating out of 67 qualifiers and 46th in yards after contact. Hyde’s 10 carries inside the 5 are the third-most this season, and all five of his touchdowns have come from one yard out. If the Jaguars are intent on preserving Fournette, it stands to reason that they’d at least want to utilize Hyde down near the goal line.

While the Eagles’ post-Jay Ajayi backfield was always expected to be a committee, it’s hard not to be troubled by just how ineffective both Clement and Wendell Smallwood have been. Neither back has averaged better than 3.1 YPC over the past two weeks without Ajayi, but Clement has seen fewer carries both weeks and is coming off an eight-carry, six-yard effort in an ugly loss to Carolina. In fact, Clement owns PFF’s third-worst rushing grade out of 57 qualifiers this season, and he ranks 52nd out of 57 qualifiers in elusive rating despite seeing an eight-man front only 8% of the time. If only there was a disgruntled superstar running back on the trade market.

Breida played only five snaps this past week after aggravating his bothersome ankle. And while Breida leads the league in yards per carry (6.5), our data reveal more to the story, especially as the 49ers get set to face PFF’s fifth-worst run defense. Breida also happens to lead the league in the all-important yards before contact metric (3.7) but ranks only 38th (out of 57) in elusive rating, with a 7.4% missed tackle rate on 68 rushes. In fact, Raheem Mostert averages 6.3 YPC and has forced as many missed tackles on 43 fewer rushes. Breida’s production is not to be discredited, but there is something to be said about the fact that San Francisco went out and signed Jerick McKinnon to be the lead dog rather than push their chips behind a guy who has topped 12 carries only once in 23 career games. 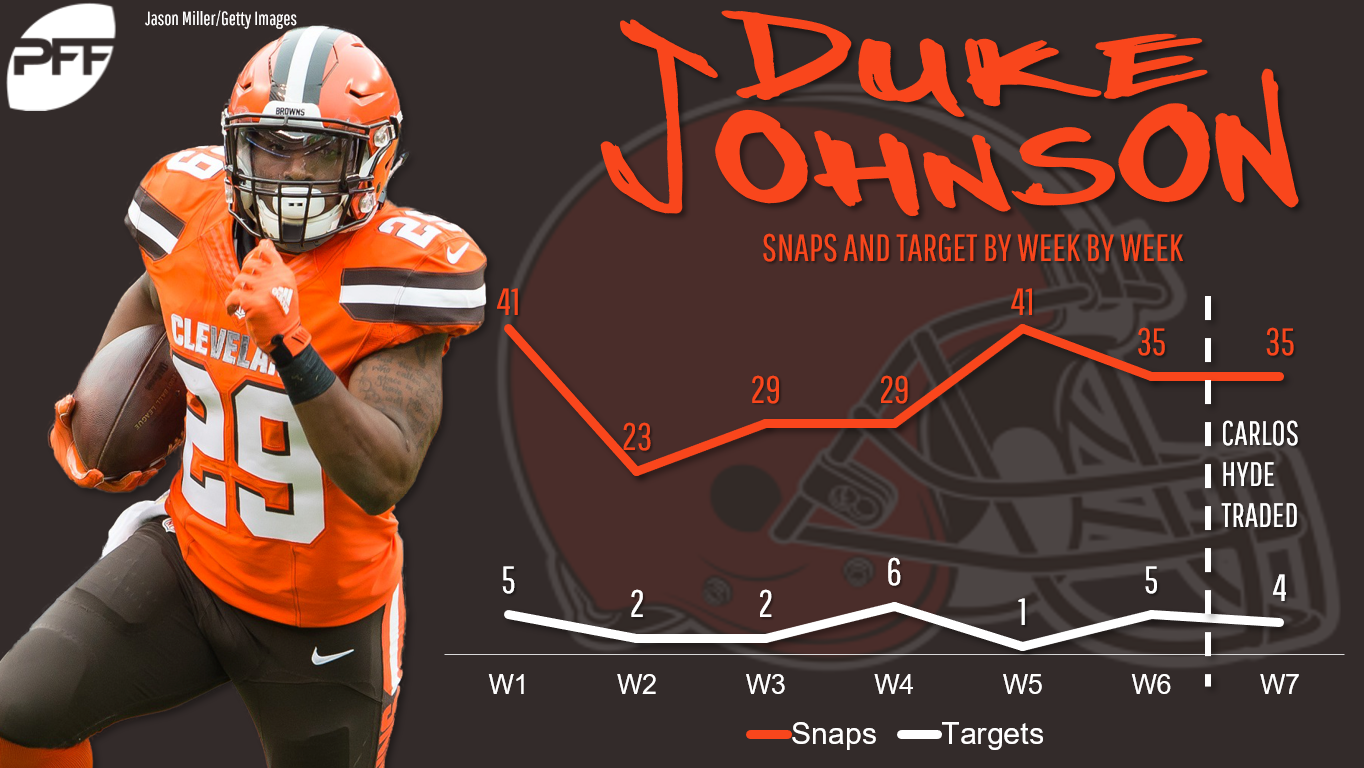 Hyde’s trade to Jacksonville was supposed to open up long-awaited (and deserved) opportunities for not only rookie Nick Chubb, but for Johnson as well. Instead, it was more of the same as Johnson was on the field for 51% of Cleveland’s offensive snaps but once was given only a handful of opportunities with the football. Johnson wound up being out-touched by Chubb by an 18-5 margin in a game the Browns trailed throughout, i.e. a typically ideal game script for him. Not only did he have just one carry (for minus-four yards), but Johnson also ran only five more pass routes than Chubb, who caught all of 13 passes over his final 34 games at Georgia. Why the Browns gave Johnson a three-year contract extension this summer is one of the greatest mysteries of our time.