No slight should be thrown in Lindsay’s direction, as he still ranks fifth in rushing grade (78.1) among NFL backs with 25-plus carries this season. The root of his success, however, is misinterpreted as his own doing rather than the work of the Broncos’ five big men in the trenches.

All of the Denver Broncos‘ offensive linemen have combined for a 73.7 run-block grade through Week 7, which ranks second behind only a Los Angeles Rams offensive line (78.7) that is star-studded top to bottom. Additionally, Broncos running backs have averaged 1.75 yards before first contact per attempt, which is good for the eighth-highest mark in the NFL and 0.34 yards above the league average.

The 5-foot-8, 190-pound Lindsay has outperformed the San Francisco back slightly in terms of creating extra yards with forced missed tackles, as he currently averages 0.12 forced missed tackles per touch while Breida averages just 0.08. But compared to the rest of the league, Lindsay can’t claim to be one of the NFL’s most elusive backs. 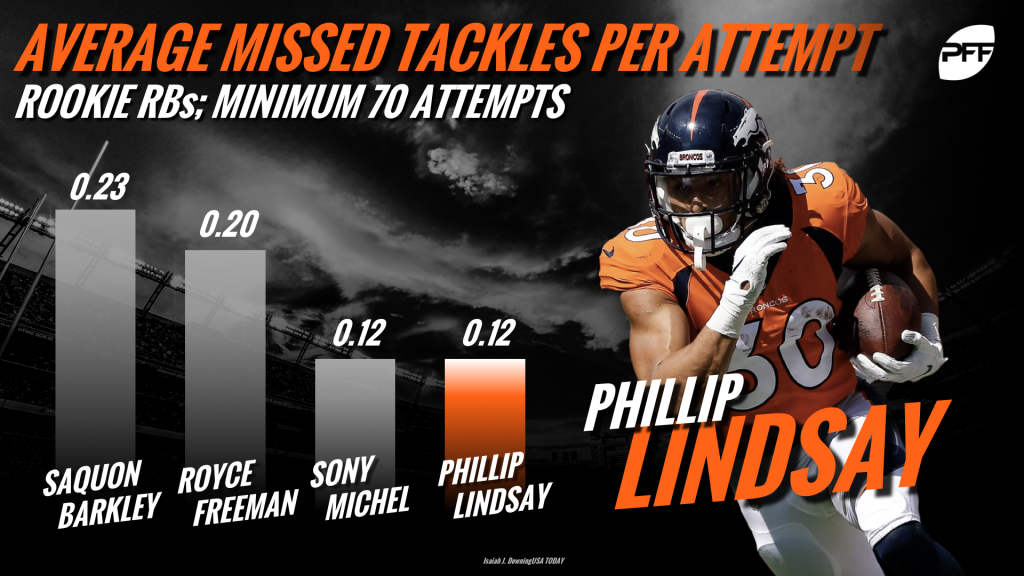 Lindsay’s 0.12 forced missed tackles per attempts ranks T-21st among qualifiers at his position, and he has forced a missed tackle on just 10.7% of his carries, ranking T-26th among the same group of running backs.

Led by center Matt Paradis and guard Connor McGovern – who both own 74.8-plus run-block grades through Week 7 – Denver’s offensive line is paving the way for their undrafted rookie running back while he is showered in praise. Though Lindsay deserves a portion of the credit, he may need to follow in high-school Marshawn Lynch’s footsteps and take his linemen to Sizzler for lifting him to unforeseen heights.