The fantasy football waiver wire can often make or break your season. Making the right decision on which players to add and drop is crucial, so we have you set up with a deep list of potential waiver wire adds for Week 8.

Mitchell Trubisky, CHI (10-20%) — Trubisky is in the midst of a breakout with three-straight top-five fantasy weeks and should be owned in all formats. 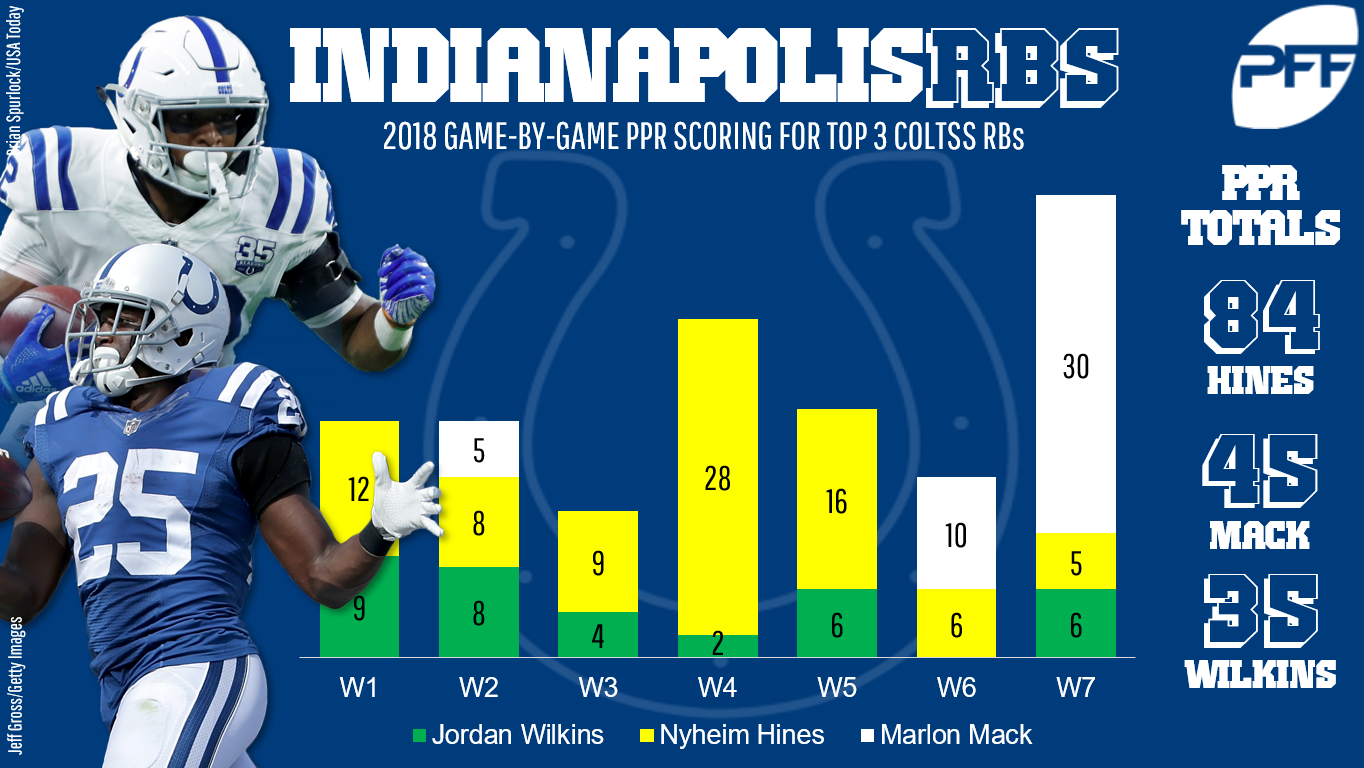 Tre'Quan Smith, NO (25-50%) — He wasn't heavily targeted in Week 7, but Smith was ahead of Cameron Meredith in terms of routes run. And we know he's capable of big games.

Courtland Sutton, DEN (15-30%) — Sutton continues to be the Broncos preferred red-zone option and could get a big time boost if the Broncos end up trading either Emmanuel Sanders or Demaryius Thomas.

C.J. Uzomah, CIN (5-10%) — With no one left at tight end for the Bengals, Uzomah should continue to see a decent workload going forward.

Dak Prescott, DAL (5-10%) — The Cowboys upgraded their wide receivers with the addition of Amari Cooper, and Prescott continues to produce with his legs.

Baker Mayfield, CLV (5-8%) — The pickings are slim at quarterback this week, but Mayfield still has the potential to offer some bye-week relief.

Raheem Mostert, SF (8-15%) — With Matt Breida banged up, Mostert could see an expanded role this week. He's averaging a massive 6.3 yards per carry this season.

Latavius Murray, MIN (5-10%) — Dalvin Cook just can't seem to get healthy, and Murray is producing in his absence.

Ito Smith, ATL (5-10%) — The numbers weren't particularly impressive Monday night, but Smith is in a full-blow committee with Tevin Coleman.

Ronald Jones, TB (5-10%) — Peyton Barber was banged up Sunday, so we could see an expanded role for Jones this week.

LeGarrette Blount, DET (3-5%) — He doesn't offer much upside, but Blount continues to be the Lions' preferred short-yardage and goal-line back.

Doug Martin, OAK (3-5%) — At this point in his career, it's tough to trust Martin as a viable every-week fantasy option despite his opportunity going forward. 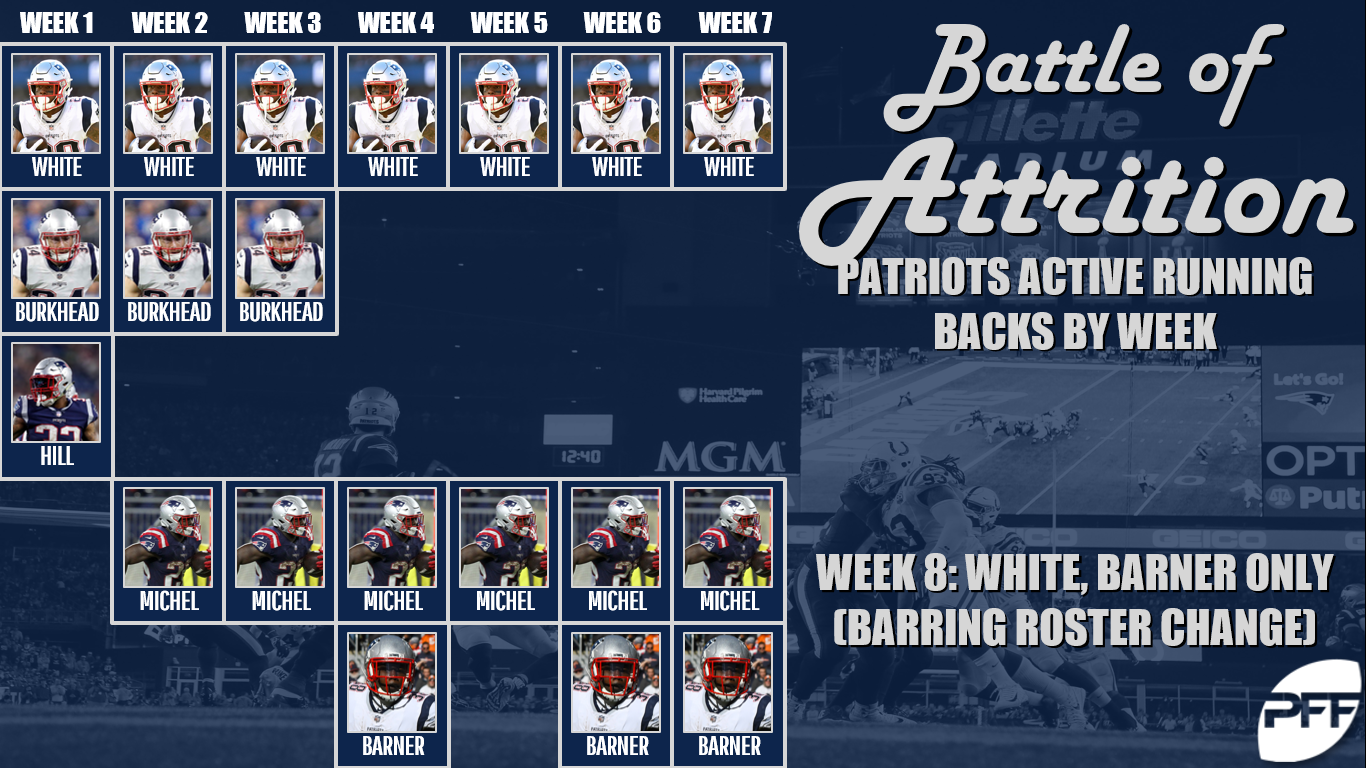 Kenjon Barner, NE (3-5%) — Sony Michel‘s injury could open up some more work for Barner, but keep an eye on the Patriots roster moves this week.

Chris Ivory, BUF (3-5%) — With LeSean McCoy dealing with a head injury, Ivory could be in store for a heavy workload this week.

Jordy Nelson, OAK (7-15%) — With Amari Cooper now in Dallas, Nelson is the de facto No. 1 receiver in Oakland.

Chester Rogers, IND (3-5%) — He wasn't heavily used in Week 7, but that was a game script thing. Rogers is still the clear No. 2 wide receiver in Indy.

Michael Roberts, DET (3-5%) — The second-year man has three scores over the last two games, but his workload and role in the Lions offense are far from clear right now. 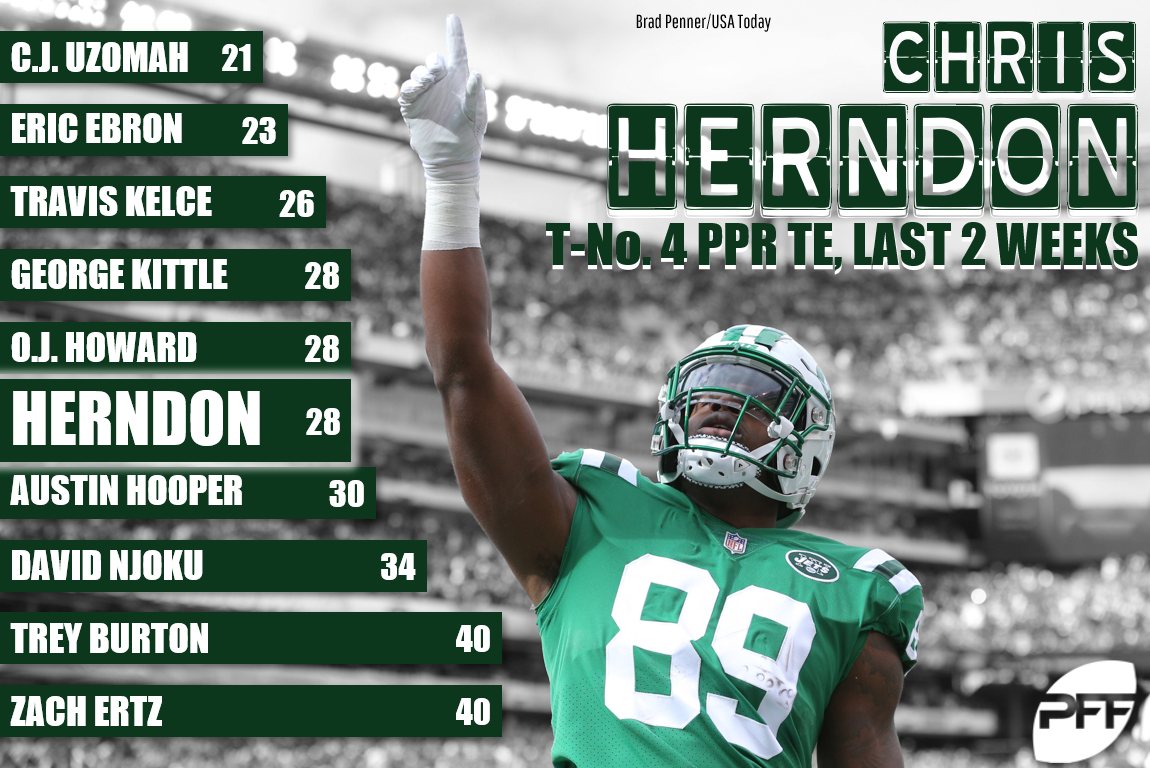 Chris Herndon, NYJ (3-5%) — The rookie has flashed upside over the past two weeks with a touchdown in both games.

Tyrod Taylor, CLV (1%) — Those in deeper leagues may want to stash Taylor just in case the Browns decide to trade him.

Rashaad Penny, SEA (1-3%) — Yes, he's been a disappointment so far this season, but Penny is still worth tucking away on your bench.

Elijah McGuire, NYJ (1-3%) — He returned to practice last week and could see an immediate role in the Jets’ offense when he's eligible to play next week if Bilal Powell misses extended time.

Mike Gillislee (1%) — He isn't on a roster, but Gillislee is a sneaky add to make in case the Patriots end up signing him.

Malcolm Brown, LAR (1%) — Brown isn't threatening Todd Gurley for carries any time soon, but he'd be a solid RB2 if Gurley were to get injured.

Josh Adams, PHI (1%) — The rookie was actually the Eagles most productive runner on a per-carry basis this past weekend.

Tajae Sharpe, TEN (1%) — Sharpe topped 100 yards last week and has emerged as an upside target in the Titans offense.

Nick O'Leary, MIA (1%) — Those in deep leagues may want to scoop up O'Leary. The Bills castoff has six catches over the last two weeks.

Arizona Cardinals (1%) — Over the last three weeks, the 49ers have surrendered 13 sacks and turned the ball over 12 times. One of those contests was against the Cardinals, and they were the No. 2 fantasy defense for the week.

New England Patriots (1%) — With Josh Allen still banged up, the Bills will start Derek Anderson again this week. That's a good thing for the Patriots.

(READ MORE: If you’re going to make waiver claims, you’ll need to drop players. Tyler Buecher identifies players it’s time to cut bait on. And for IDP players, Ross Miles breaks down the top waiver claims on the defensive side of the ball.)