The virtue of handcuffing running backs in fantasy football is well known by now, as are the risks. You can grab your star back’s key backup and feel great if the starter goes down, or you can clog your bench all season as the starter dominates.

Which is correct? Smart people can disagree on the topic. But whether you choose to employ backups or merely want to keep an eye on players who could find a starting job down the road, it’s worth knowing the handcuff and committee situations around the league.

That’s where the Committee Report comes in. Each week, I’ll look at the team RB situations around the league that are the most in flex, looking for where there is value in adding, holding or moving on.

First, though, is a look at the previous week’s advice.

Notes: Ekeler is our single-highest graded RB through two weeks and has a league-high five runs of 10-plus yards – on only 16 carries. Ekeler enters Week 3 tied for ninth in PPR scoring. … Crowell came back down to earth after his 100-yard effort in the opener, although he still held a 12-5 edge in carries over Bilal Powell. … Wilkins has forced only two missed tackles on 29 touches, and Marlon Mack is another week removed from his hamstring injury. … Freeman owners have every right to panic after watching his snap share dip while Phillip Lindsay went for 100 yards.

Bernard averaged 16.4 PPR points during the five games last season that he had 15 or more touches. For his career, Bernard has posted double-digit PPR points in 23 of 29 games with 15-plus. Joe Mixon is expected to miss 2-4 weeks following a similar knee procedure as the one that kept Sony Michel sidelined for the better part of a month. Bernard may not average 22 touches per game while Mixon is out, but he’ll certainly get enough work to be a viable RB2. This week’s matchup with Carolina is particularly appealing, considering the Panthers rank in the bottom-third of the league in both pass-rush grade and coverage grade. Bernard’s status needs to be monitored after he was limited in Wednesday’s practice with a knee injury. 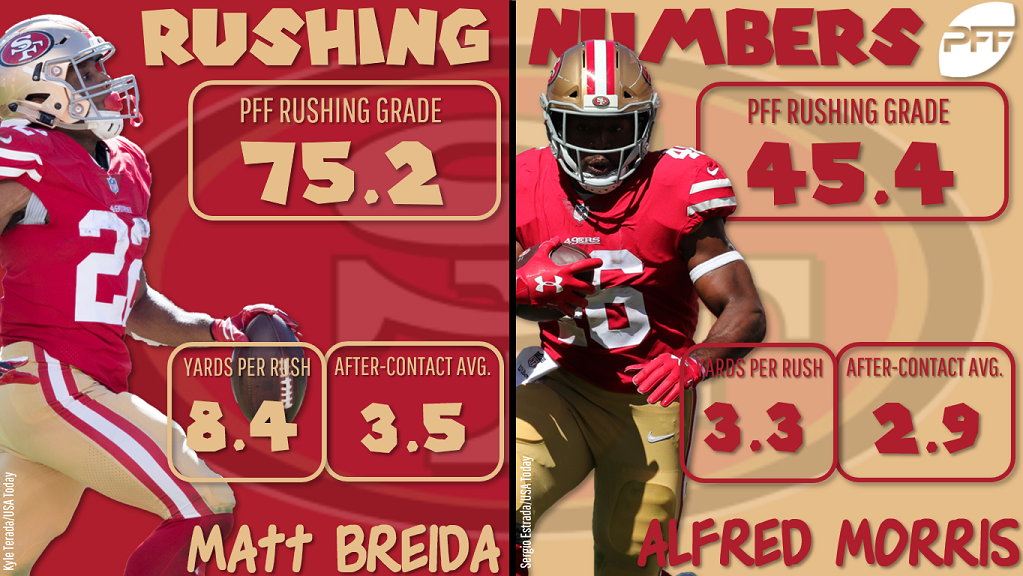 The current clubhouse leader in yards added, Breida sits fifth in PFF rushing grade (75.2) on the young season. Three of Breida’s 22 carries have gone for 15 or more yards, and five have netted 10-plus as he looks to build on a breakout Week 2 performance. The fact that Alfred Morris has already put the ball on the ground twice further helps Breida’s case. Another factor: this week’s matchup in Kansas City has the makings of a potential shootout, with Las Vegas’ highest game total of the slate currently set at 56 points.

Entering Week 3, Lindsay leads Denver’s backfield with 54 snaps, followed by Freeman with 45 snaps and Devontae Booker with 41. While this backfield might be best avoided in fantasy for the time being, Lindsay is shaping up to be the back to own as a potential flex option in all formats. An undrafted rookie free agent after setting Colorado’s school record for all-purpose yards, Lindsay has logged a team-high 29 carries in the first two weeks. He hasn’t given the Broncos’ coaches much reason to go away from the hot hand, considering he’s averaging 3.9 yards after contact with a tackler evaded on 22 percent of his touches.

Seemingly out of nowhere, Seahawks coach Pete Carroll opted to ride rookie Penny in the second half of Monday night’s game in Chicago. Of course, Carroll has been known to throw fantasy owners a few curveballs over the years. Still, it was rather unexpected coming off a disappointing preseason that saw Chris Carson run away with the starting job. Carson was apparently “gassed” on six touches Monday night and did not touch the ball in the second half, leading the way for Penny to log 10 carries and a pair of pass targets. Not that Penny has been overly impressive, averaging 2.24 yards on 17 carries behind Seattle’s shaky O-line. Still, his emerging role is an encouraging one for fantasy owners.

Alex Collins’ fumbling issues have helped opened the door for Allen to carve out a sizeable role in Baltimore. Of course, Allen has done quite a bit on his own to warrant more playing time, considering he owns the fourth-best PFF rushing grade (75.9). Thanks to 10 catches and a pair of touchdowns, Allen has cracked 13 PPR points in each of his first two outings despite a total of 20 touches. This has been possible thanks in part to a Ravens offense that is averaging a league-high 78 snaps in two games. In addition to his passing-game role, both of Allen’s touchdowns have come on carries inside the five. Given his price tag and expected opportunity, Allen makes for a solid value in FanDuel lineups this week.

Hyde got a couple of red-zone carries in Week 2, but despite sitting among the top-24 PPR backs in the early going, he’s been rather inefficient. Hyde ranks 29th out of 30 qualifiers in elusive rating, having forced just two forced tackles on 40 touches. He has seen 75 percent of the Browns’ rushing attempts but is averaging just 2.8 YPC, including 1.9 after contact. Meanwhile, Nick Chubb owns a league-best 82.5 PFF rush grade through two outings, with all but four of his 35 yards coming after contact. Coach Hue Jackson also said this week that he wants to get Duke Johnson more touches than the 11 he’s seen to this point. Whether or not Jackson is to be believed regarding Johnson, gamescripts will dictate more usage at some point or another.

Returning from suspension this week, Aaron Jones will slot in behind Williams and Ty Montgomery, but it’s only a matter of time before the cream rises to the top. Jones has proven to be the superior back thus far, as he averaged 86.5 yards on 15.5 carries (5.6 YPC) to go with three TDS during his four rookie starts. Williams, on the other hand, has yet to break a single tackle on 34 touches this season and was actually our worst-graded RB after Week 1. Williams is averaging just 3.6 yards on 184 career carries and has consistently graded poorly in the passing game.

Those owners saving a roster spot for rookie Ronald Jones may want to hold out a little longer. Former undrafted free agent Barber was a trendy name throughout preseason, mostly because Jones was so woefully ineffective in his first taste of NFL action. Jones has been a healthy scratch for each of the first two weeks, but it’s hard to imagine the Bucs’ second-rounder not getting a shot at some point this season. Barber managed only 22 yards on 16 carries against Philadelphia this past week and is averaging just 2.6 YPC through two contests. Other than his one 1,000-yard season in college, we simply don’t have much evidence that Barber is capable of being a workhorse back at this level.

After logging 18 carries in the opener, Burkhead saw only six carries against Jacksonville in Week 2. He played 15 out of 61 offensive snaps (25 percent) against the Jaguars, just ahead of rookie Sony Michel (13 snaps) but well behind James White (34) as he all but disappeared in the second and third quarters. In fact, Michel’s 10 carries were as many as Burkhead’s and White’s combined. On top of having caught only one pass this season, Burkhead is averaging 3.6 YPC and sits in the bottom-third of the league in elusive rating. The Patriots have yet to notch a rushing score, and Burkhead hasn’t gotten a single red-zone opportunity. After falling behind this preseason due to a knee injury, Michel may be ready for the opportunity to deliver on his first-round draft stock.

Ajayi (back) and Darren Sproles (hamstring) are both considered day-to-day after missing Wednesday’s practice. If both are limited or unavailable for Sunday’s bout with the Colts, it would open up a huge opportunity for Corey Clement, and given what we’ve seen from the second-year back, he might not relinquish that opportunity. Clement trails only Tevin Coleman in breakaway percentage (64.3 percent), and he ranks eighth in fantasy points per opportunity after ranking eighth a year ago (min. 100 rushing attempts). Ajayi’s fantasy stock has been buoyed by three TDs, but he managed just 23 yards on seven carries against Tamp Bay and has a single-game high of 18 carries in 13 games since joining the Eagles. With Sproles and/or Clement handling the passing-down work, Ajayi’s fantasy stock is settling toward Alex Collins territory as a low-end RB2.