James Conner was the quintessential handcuff entering the season, and he showed exactly why in Week 1 with the overall RB2 fantasy performance. For fantasy football owners who wisely owned both Steelers’ RBs, the dream scenario would be a trade for Le’Veon Bell, potentially creating two fantasy RB1s for the price of one.

Granted, it’s not like that kind of seamless path to fantasy stardom is waiting the weeds of every fantasy backfield. It takes a perfect marriage of skill and circumstance to do what Conner did in Week 1 or, for that matter, what DeAngelo Williams did in 2015 subbing for Bell. But when that opportunity strikes, it can be a league-winner. That’s why it’s ever so important to keep tabs on subtle trends emerging in fantasy backfields, before everyone in your league is lining up for that week’s hot waiver pickup.

Suddenly the last man standing in a battle of attrition among Patriots’ running backs, White is a popular plug-and-play option even in a tough matchup at Jacksonville. With Rex Burkhead in the concussion protocol and Sony Michel still recovering from a knee procedure, White is looking at a sizeable uptick in usage after playing 48 percent of the offensive snaps in Week 1. With New England down to spare parts at wideout, White already drew a 21-percent target share from Tom Brady with eight targets in the opener, up from his average of 4.9 a year ago.

All Ekeler did in his 2018 debut was post the league’s top overall RB grade (91.2), top run grade (85.6) and top receiving grade (93.1). Ekeler finished fourth among all RBs in fantasy points per opportunity (0.64) last season, and he was again fourth among all RBs in Week 1 (1.2). While that figure obviously isn’t sustainable, there is no denying Ekeler’s fantasy production when called upon thus far in his budding career. His weekly volume may be spotty behind Melvin Gordon, but with Justin Jackson unable to latch onto the Chargers’ active roster, Ekeler is one of the more appealing handcuffs on top of his standalone PPR value.

The top elusive rating in Week 1 belonged to Crowell, who averaged a ridiculous 9.8 yards after contact to go with a 30-percent forced missed tackle rate on his 10 carries. Crowell also had all four of the team’s red-zone carries. Of course, anyone who owned a share of the Jets’ backfield last year knows the drill with Bilal Powell. And Powell didn’t exactly put those concerns to bed in the opener, as he matched Crowell with 24 snaps and logged three more touches, finishing with 65 yards. Still, we can’t ignore that Crowell did in one game what Matt Forte failed to do all last season: rush for 100 yards.

Granted, Jones won’t see the field until Week 3 when his suspension ends. But this is also a guy who put up RB1 numbers in his only four starts as a rookie, averaging 86.5 yards on 15.5 carries (5.6 YPC) with three TDs. Given his current availability in more than half of ESPN leagues, now is a good time to stash him before it’s too late. Especially after Jamaal Williams managed a rather pedestrian 47 yards on 15 carries (3.1 YPC), as he failed to force a single missed tackle or haul in either of his two targets. In fact, his 44.2 grade for Week 1 was dead-last out of 51 RBs.

LeGarrette Blount’s Lions debut maybe didn’t go as planned, considering he lost three yards on four carries and was knocked out of the game with an injury. The good news for Blount is that he returned to practice on Wednesday and looks to have a good shot at playing this week. Theo Riddick commanded the Lions’ backfield snaps in a turnover-laden embarrassment on national TV. But make no mistake, the most effective player in the Lions’ backfield on Monday night was Johnson, who has been turning heads all summer. The second-round rookie saw only 16 snaps in a negative game script, although it’s only a matter of time before first-year coach Matt Patricia turns to Johnson to provide a much-needed spark.

Each of Tennessee’s first eight backfield touches against Miami went to Henry. However, the script got flipped as the game wore on, and Dion Lewis wound up with a 49-20 edge in snaps and a 21-11 advantage in touches. Of those 21 touches, Lewis forced seven missed tackles and averaged 3.44 yards after contact. Despite how much Henry has excelled at slipping tacklers since entering the league, there was a reason the Titans went out and signed Lewis to one of the league’s richest contracts for a running back.

The Colts’ fifth-round rookie had a golden opportunity to establish himself with incumbent Marlon Mack unable to suit up for the opener. However, Wilkins failed to impress with said opportunity in Week 1, finishing with just 40 yards on 14 carries (2.9 YPC) while averaging a rather pedestrian 1.64 yards after contact. Mack appears set to return from his hamstring issue, and the Colts’ O-line will get some reinforcement with LT Anthony Castonzo practicing in full after missing the opener. The Colts logged their most snaps in two-plus seasons thanks to an uptick in no-huddle, which is a less than ideal fit for a fresh rookie. 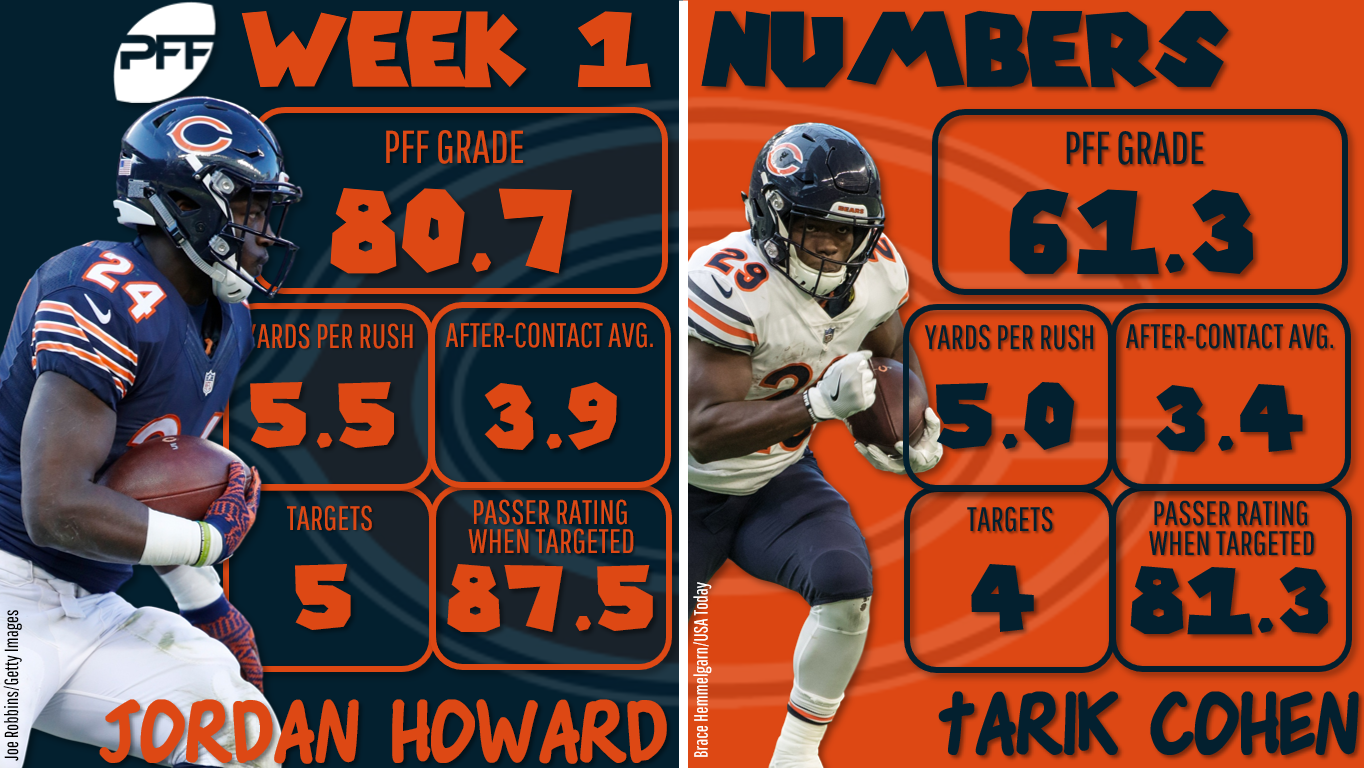 The Bears’ coaches warned us about Jordan Howard’s expected three-down role, and that came to fruition in Week 1 as he actually ran more routes than Cohen (24-20) and hauled in all five of his targets for 25 yards. Only once last year did Howard catch five passes in a game. All told, he turned 20 touches into 107 yards and posted the week’s second-best overall RB grade (80.7). Cohen need not be rostered.

The good news for Freeman owners is that Devontae Booker has effectively gone from starter to afterthought, logging two carries on 19 snaps. The bad news is that Phillip Lindsay emerged out of nowhere and split the workload right down the middle with Freeman. The undrafted rookie managed 102 yards and a score on 17 touches and was on the field for only three fewer snaps than fellow rookie Freeman, who had 71 yards on 15 carries. After sprinkling in with the first team throughout an impressive preseason, Lindsay has earned himself a chance to be the weekly hot hand for the foreseeable future. He and Freeman are essentially neck-and-neck as flex options in our Week 2 projections.

There was an ongoing debate this summer as to whether Drake was ready for a featured role entering his first full season atop Miami’s depth chart. While his opening week stat line was rather underwhelming (14 carries, 48 yards), he did grade out seventh-best among all RBs by our analysts. More pressing, however, is that the ageless Frank Gore looked awfully spry in his Dolphins’ debut, turning nine carries into 61 yards and nearly doubling up Drake in average yards after contact (3.6 to 2.1). Keep in mind, Drake has two career 100-yard rushing games to his credit, and they both came in the only two games he’s ever gotten 20-plus carries. In other words, for those who drafted him with that ceiling in mind, Gore’s involvement is a problem.