The second week of the fantasy football season came and went and once again there was a wide array of outcomes. Some high-priced players have yet to get things going, some surprising early-season performers have created some buzz and injuries continue to create problems around the league.

To aide you in your analysis of some recent trends and developments, here’s a look at some players on the rise, some sliding down, and a couple to keep on the radar.

Cousins’ start to his Vikings’ career isn’t getting the headlines Patrick Mahomes has garnered, but it’s been impressive nonetheless. Through two games he’s thrown for 669 yards and six touchdowns while generating 0.56 fantasy points per dropback.

A big chunk of Cousins’ production came in Week 2 in a tie versus the Packers, as he completed 35-of-48 passes for four scores and 425 yards as the Vikings rallied to get back in the game. He has already developed some nice chemistry with his new targets, especially Stefon Diggs.

The schedule lightens up as the calendar nears October starting this week with the Bills. With a consistent weekly floor and the capability of having big days like he did in Green Bay, Cousins remains a desirable QB1 option. 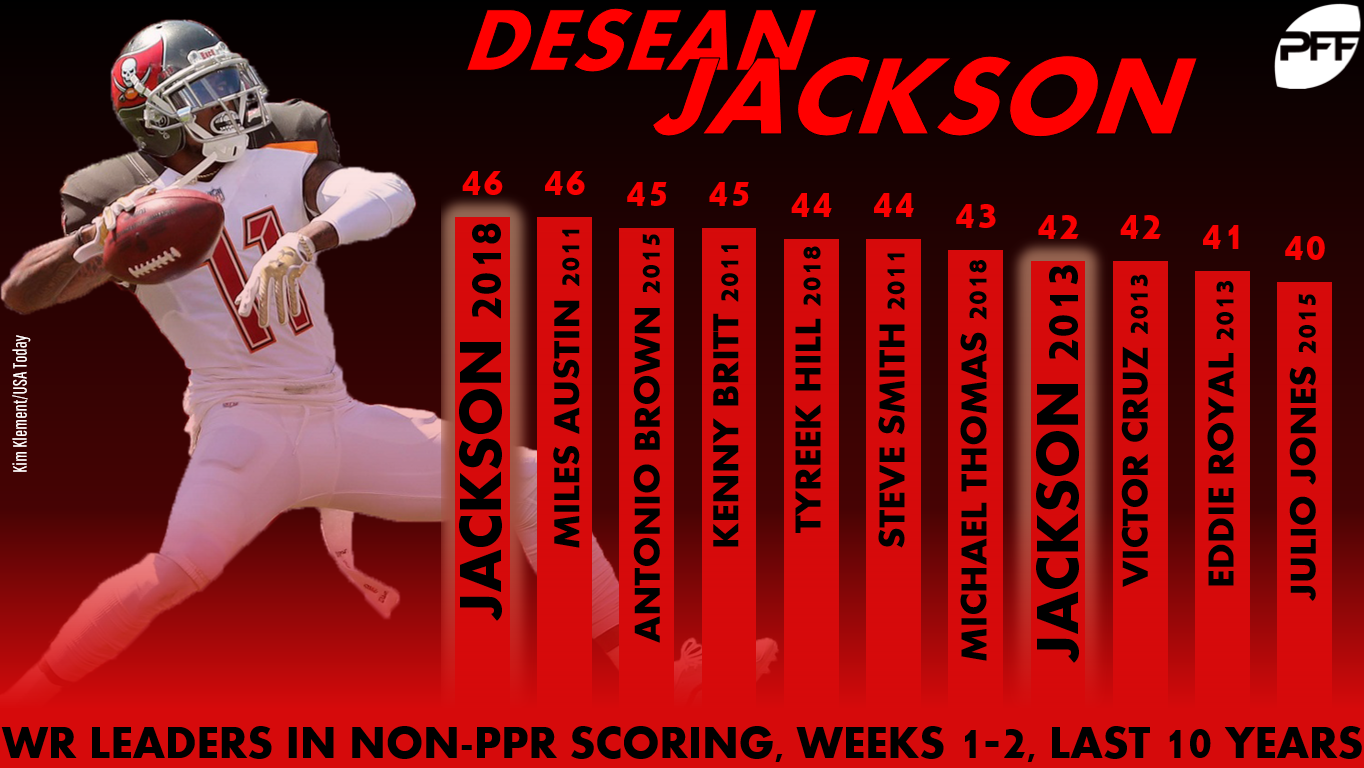 Despite only being targeted nine times through two weeks, Jackson is atop all fantasy receivers in non-PPR scoring. He has pulled in every target thrown his way and now has nine catches for 275 yards and three touchdowns.

Jackson has developed some nice chemistry with Ryan Fitzpatrick, who is starting in place of the suspended Jameis Winston. His numbers (23.0-yard average depth of target, 30.6 yards per reception) show that the 31-year-old still has the juice to be one of the league’s better deep threats.

It is going to be interesting to see how things unfold after Week 3 when Winston returns. Fantasy owners should ride the wave with Jackson while it lasts. Next up is a Monday night matchup with a Steelers team that just got lit up by the Chiefs for six passing scores.

The tight end position has been very dicey during the first couple of weeks of 2018. However, the Colts’ newest addition has been pretty steady. Ebron has scored in back-to-back contests and joins Jordan Reed and Will Dissly as the only tight ends to hit double-digit PPR points in each of the first two games.

For the second straight week, Jack Doyle saw more targets for Ebron. Through two weeks, Doyle has 14 targets for nine catches and 80 yards to Ebron’s nine targets for seven catches and 77 yards. However, Ebron’s ability to find the end zone has made him the better fantasy producer of the two so far.

With the options at tight end being less than appealing for many fantasy owners, both Doyle and Ebron look like solid back-end starters moving forward as — outside of T.Y. Hilton — there isn’t much competition for targets in the Indianapolis passing attack.

Things have started terribly for Johnson and the Cardinals through two weeks of action. Arizona is averaging a league-worst 47 plays per game and by far the fewest points per play (0.06) of any team.

Johnson, a top-five fantasy pick coming into the year, only picked up 48 yards on 13 carries and produced just 1.8 yards after contact. He was only targeted twice in Week 2’s loss and finished with just one catch for three yards. His usage thus far has been mind-boggling, but owners have no choice but to remain patient.

There’s not much room for optimism when looking at the Arizona offense right now, and a quick glance at the upcoming schedule — with meetings with the Bears, Seahawks, 49ers, and Vikings over their next four games — doesn’t offer hope for a quick turnaround.

If were having a redraft of your fantasy football league after two weeks for the rest of the season would David Johnson still be a top 5 pick for you?

Hyde has dominated the team’s workload through the first two weeks of the season, emerging as a top-15 non-PPR fantasy running back. Only James Conner and Todd Gurley (39 apiece) have seen more carries than Hyde’s 38 through two weeks of action. 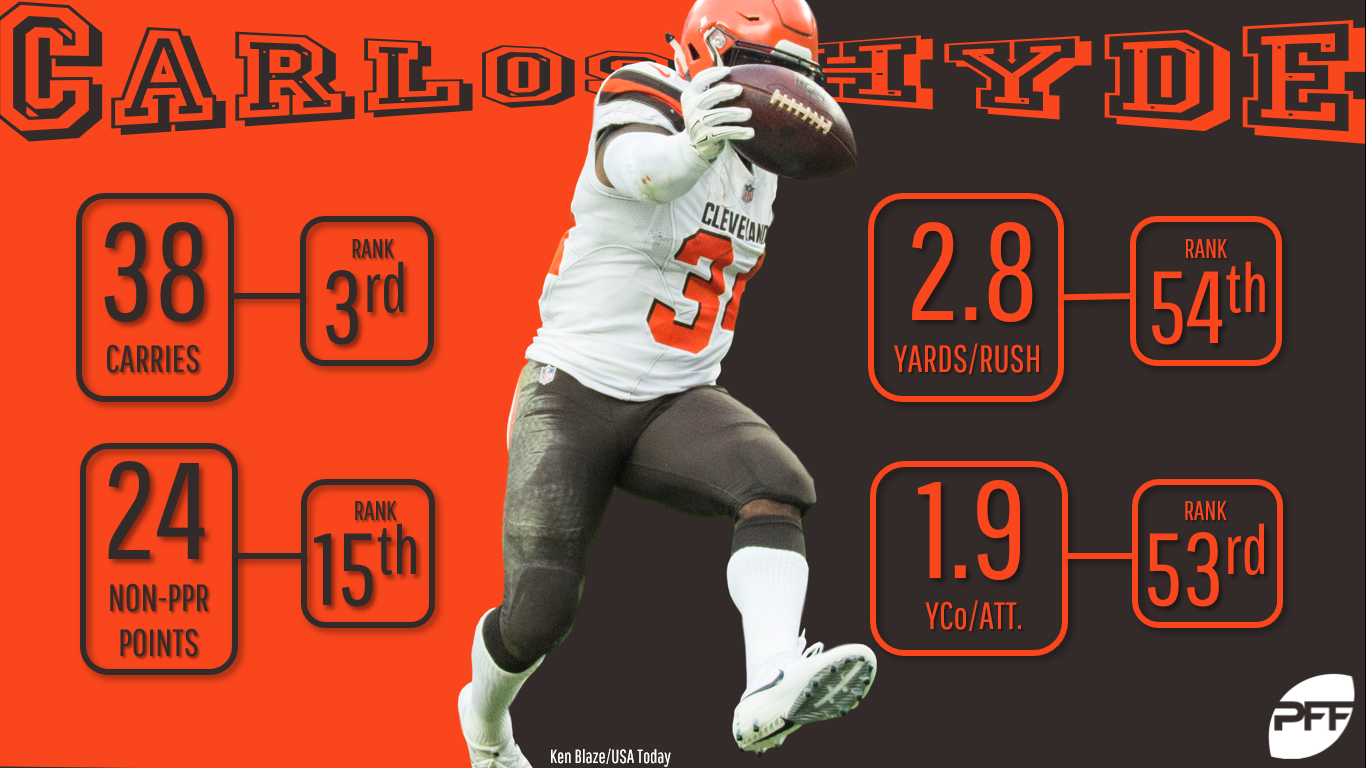 Hyde has seen 74.5 percent of the rushing attempts the team has offered up during their first two contests, finding the end zone in each game. Unfortunately, the efficiency hasn’t been there, as he’s only averaged 2.8 yards per carry and just 1.9 yards after contact.

In addition, Hyde has just two catches for 10 yards on three targets through three games. With gameflow likely working against Hyde and the Browns more weeks than not he is a bit more TD-dependent than preferred in an RB2 option.

For the second time in two weeks, Crowder left owners who inserted him into their lineups disappointed. He did see the field more frequently this time around, playing on 92 percent of the team’s snaps compared to just 62 percent of the Redskins’ plays the week before.

However, it did not lead to increased production. Crowder finished with only two receptions for eight yards on three targets. He did rush for 29 yards on two attempts, but now has a total of seven targets for five catches and 40 yards through two games.

Jordan Reed and Chris Thompson continued to be the focal points of Alex Smith’s attention. Crowder is fifth on the team in targets on the season, with one fewer target than Josh Doctson (8) and four fewer than Paul Richardson (11).

Boyd has emerged early on this season as the Bengals’ best wide receiver outside of A.J. Green. He was targeted the same number of times (9) as Green in Thursday’s win over the Ravens and finished with six catches for 91 yards. He’s worth scooping up in deeper PPR leagues now and should be on all owners’ radar moving forward. The team is still trying to figure out to incorporate speedster John Ross into the offense, but now in his third season Boyd appears primed to take a step forward in 2018.

It hasn’t been pretty, but Tannehill has guided the Dolphins to a 2-0 mark and provided some decent fantasy production in the process. Through two weeks of action he’s thrown for four scores and 398 yards on 37-of-49 passing and rushed for an additional 48 yards on 12 carries. That’s good enough to put in the top half of fantasy quarterbacks. He’s not a bad backup to have on your fantasy squad and needs to be considered as a starting option in two-QB and superflex formats.