Hurries, hits and sacks allowed all come into play for offensive linemen, as does PFF’s pass-blocking efficiency metrics, which measures pressures allowed on a per-snap basis with weighting toward sacks allowed. The formula:  1 – (Sacks + Hits) / (2) + (Hurries) / (2) / (Total Pass-Block Snaps) * 100. All of which can be found in Premium Stats 2.0, which is made available to PFF's ELITE subscribers.

We'll also highlight positive and negative run-block percentages, blocks charted as “beaten by defender” and pressure percentage allowed. Though such stats aren’t made available in Premium Stats 2.0, they’re often referenced in our Premium Content made available to EDGE and ELITE subscribers.

Baltimore Ravens fourth-year offensive tackle Ronnie Stanley led all at his position with 300 or more pass-blocking snaps in PFF pass-blocking efficiency (99.3). He allowed just 10 total pressures across his 515 pass-blocking snaps (includes postseason) in 2019. As a result, Stanley was named the PFF Pass Blocker of the Year this past season. 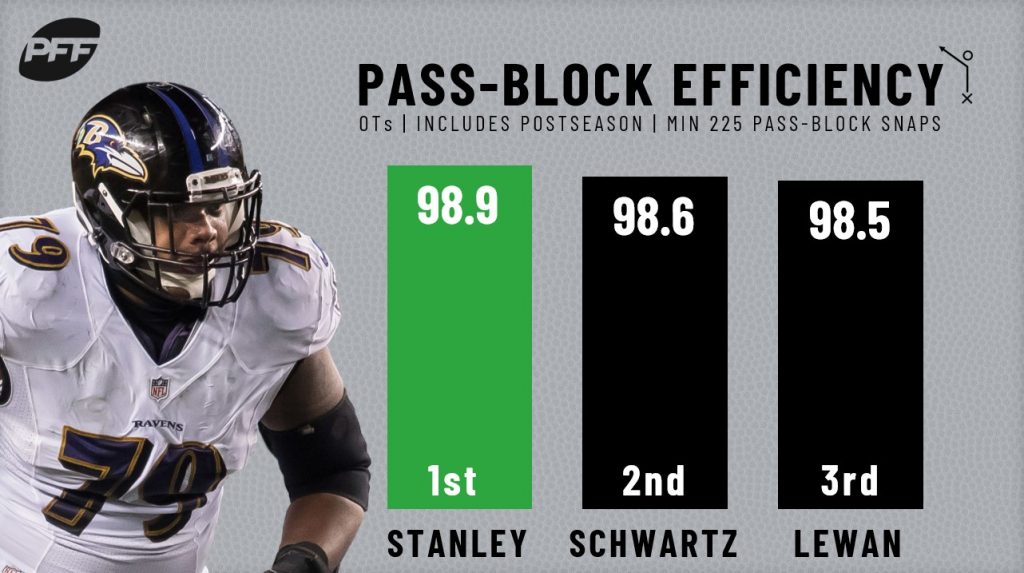 Stanley’s teammate, veteran guard Marshal Yanda, led all qualifiers at his position in PFF pass-blocking efficiency (99.0) in 2019. He allowed just 10 total pressures (nine hurries, one sack) across his 534 pass-blocking snaps on the season. Oakland Raiders’ Richie Incognito and New England Patriots’ Joe Thuney finished second and third behind Yanda at 98.8 and 98.7, respectively.

Minnesota Vikings guard Pat Elflein recorded the lowest PFF pass-blocking efficiency (95.6) of any qualifying guard in the NFL and allowed 38 total pressures in the process.

Watt is also graded positively for this play but doesn’t add a pressure to his pressure total, which we’ll get into later in the Signature Stat Spotlight series when we dive into defensive linemen.

On every run play of every game, every offensive lineman on the field receives a +/- grade from -2.0 to +2.0. Any play where he’s given a grade greater than 0.0, it’s charted as a positively graded run-block snap and vice versa.