PFF charts defensive stops on passing and running downs, which are recorded when a defender makes a tackle (includes sacks) and limits the offensive player from gaining 45% or less of the yards needed to move the chains on first down, 60% or less on second down or prevented from picking up the first down on third/fourth down. We then calculate the run-stop percentage (defensive stops recorded on running downs/run-defense snaps) from our stop charting for all defenders, including off-ball linebackers. 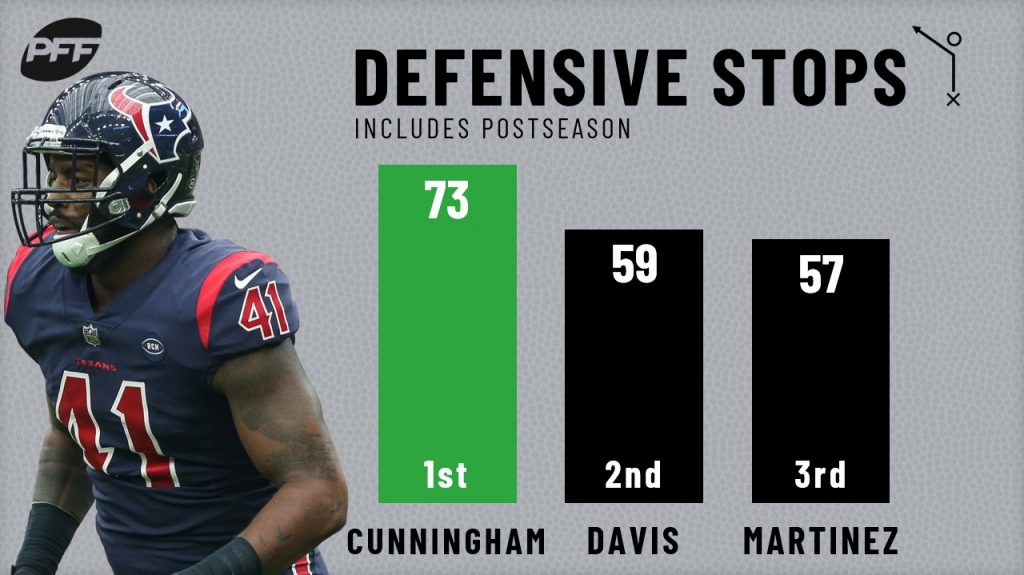 In addition to the above metrics, I’ll also dive into first contact percentage, forced incompletion percentage and PFF’s advanced positional charting that tracks where all defensive players, including off-ball linebackers, line up on every play.

Houston Texans’ Zach Cunningham, in addition to leading the NFL in total combined stops, led all off-ball linebackers with 200-plus run-defense snaps in PFF run-stop percentage. He recorded a defensive stop on an NFL-high 14.1% of his run-defense snaps this past season. Cincinnati Bengals rookie Germaine Pratt was the only other qualifying off-ball linebacker with a run-stop percentage above 11% in 2019.

Among the 66 off-ball linebackers with at least 30 targets in coverage in 2019, Collins was the only one with a passer rating when targeted under 73.0. He allowed just 27 receptions from 34 targets for 205 yards, zero touchdowns and three interceptions this past season.

Oakland Raiders’ Tahir Whitehead allowed a 150.5 passer rating when targeted in 2019, the highest figure of any off-ball linebacker with at least 30 targets.

So much of a linebacker’s role in coverage is limiting yards after the catch. Allowing a high completion percentage at off-ball linebacker is common; the difference-makers at the position limit production after the catch.

Soon-to-be unrestricted free agent Joe Schobert led all off-ball linebackers with 30-plus targets in 2019 in yards after the catch allowed per reception allowed at 3.71. He and Philadelphia Eagles’ Nigel Bradham ranked first and second at 3.71 and 3.83, respectively.