Safeties need to be versatile in today’s NFL. The best at the position can thrive from any pre-snap alignment, play the run and make plays both in coverage and rushing the passer. As such, all of PFF’s advanced stats and pre-snap charting tied to defensive players apply to today’s safeties.

Tracking where safeties line up pre-snap is also vital to understanding the impact and value any given safety brings to the table. For example, New York Jets’ Jamal Adams played 489 defensive snaps in the box, 281 at free safety, 172 at slot cornerback, 137 along the defensive line and another 40 at boundary cornerback.

Outside of Premium Stats 2.0, PFF charts depth of target for cornerbacks and safeties, which can shed light on how defensive backs perform when targeted at the short, intermediate and deep levels of the field. 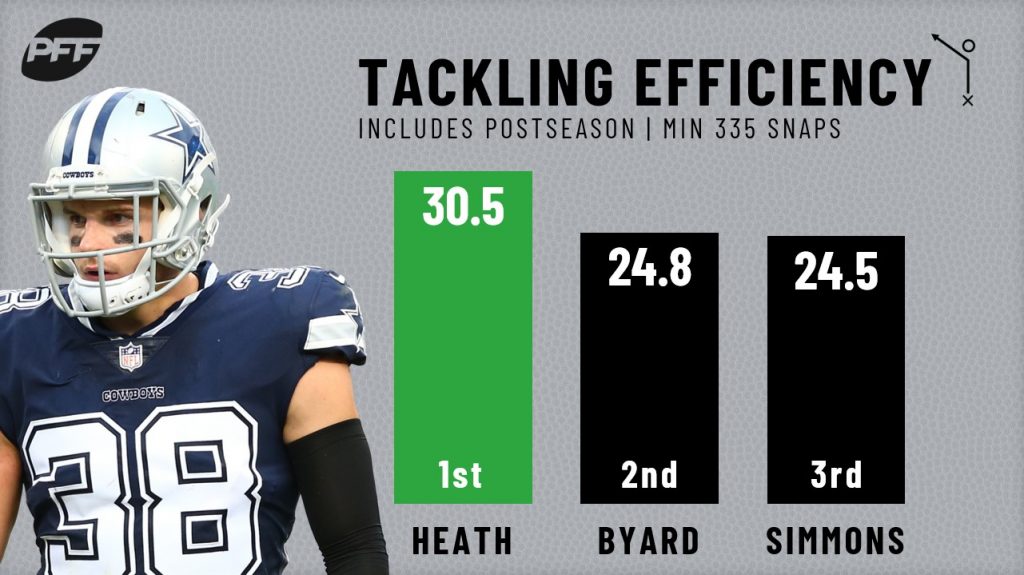 Among the 43 NFL safeties with at least 30 targets in 2019, Denver Broncos’ Justin Simmons ranked first in passer rating when targeted at 32.1. The soon-to-be unrestricted free agent allowed just 25 receptions from 47 targets for 239 yards, zero touchdowns and four interceptions. New England Patriots’ Devin McCourty ranked second among qualifiers at the position at 41.8.

No qualifying safety allowed a higher passer rating when targeted than Carolina Panthers’ Eric Reid. He allowed 46 receptions from 58 targets for 592 yards, seven touchdowns and zero interceptions en route to a 148.8 passer rating allowed in 2019.