Rounding out the Signature Stat Spotlight series, we take on wide receivers and the advanced stats that play into evaluating pass-catchers at the NFL and FBS level.

Yards per route run is the crown jewel of PFF’s advanced stats for wide receivers. Dividing total receiving yards recorded by the number of routes run in a given game, season, career, etc. provides a great one-number summary of just how efficient a receiver is on a down-by-down basis. Receivers need to create separation, earn targets, secure passes and generate yards after the catch to have a high yards per route run figure, making it a product of multiple factors and, as a result, a fantastic advanced stat made available to all of PFF’s ELITE subscribers.

Among the 84 NFL receivers with at least 300 routes run in 2019, New Orleans Saints’ Michael Thomas ranked first in yards per route run at 2.82. Including the postseason, Thomas caught 156-of-188 targets (83%) for 1,795 yards, 85 first downs and nine touchdowns a year ago. Green Bay Packers’ Davante Adams and Minnesota Vikings’ Stefon Diggs ranked second and third at 2.61 and 2.50, respectively. 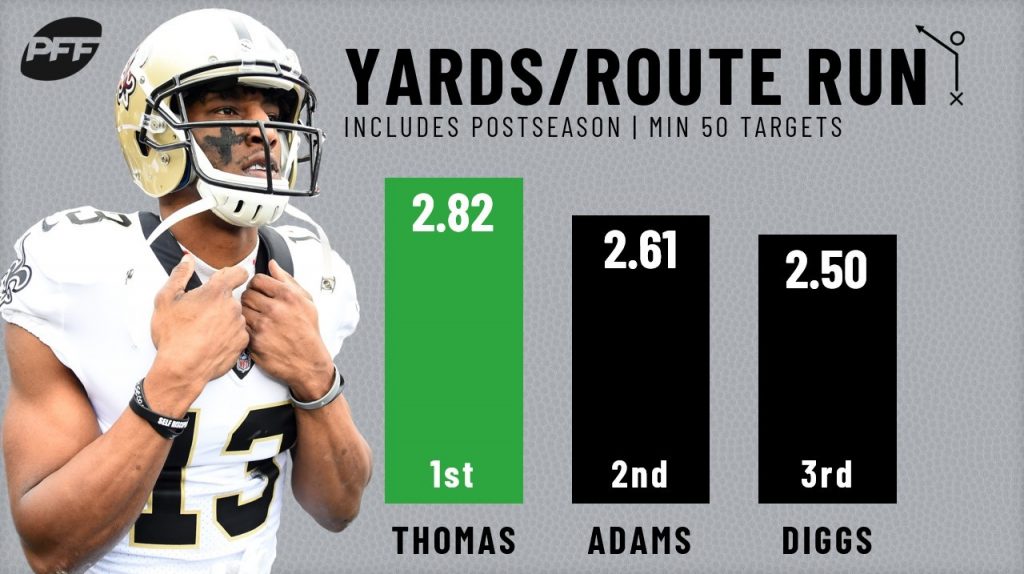 Philadelphia Eagles rookie wideout J.J. Arcega-Whiteside (.54) and Los Angeles Chargers’ Andre Patton (.18) ranked 83rd and 84th in yards per route run in 2019. JJAW caught just 10-of-19 targets for 169 yards, six first downs and one touchdown across 312 routes as a rookie.

Kansas City Chiefs rookie receiver Mecole Hardman caught 30-of-42 targets for 567 yards, 13 first downs and six touchdowns en route to an NFL-best 153.3 passer rating when targeted in 2019. Fellow rookie Marquise Brown ranked second among the same group of qualifiers in passer rating when targeted (129.8), as he hauled in 53 passes from 76 targets for 710 yards, 23 first downs and seven touchdowns for the Baltimore Ravens this past season.

No NFL receiver recorded more yards on deep targets – 20-plus air yards – than Diggs in 2019. He caught 17-of-32 targets for 676 yards, 10 first downs and seven touchdowns on targets of 20-plus air yards this past season. Detroit Lions’ Kenny Golladay recorded more deep targets than any other NFL receiver in 2019 with 37, but he still finished second behind Diggs in total deep receiving yards (628).

This release from Stefon Diggs is fantastic, what a clean move off the snap. ???? pic.twitter.com/yy6bM9V7F7

Chargers veteran receiver Keenan Allen and Panthers’ Curtis Samuel were the only two NFL receivers with 20 or more deep targets and fewer than 200 deep receiving yards. And Cleveland Browns’ Odell Beckham Jr. recorded the lowest passer rating when targeted on deep targets among qualifying wideouts at 40.9.

Among the 32 NFL receivers with at least 200 routes from the slot in 2019, Thomas ranked first in PFF receiving grade (90.3) and Los Angeles Rams’ veteran Robert Woods ranked second (89.0). Denver Broncos slot receiver DaeSean Hamilton recorded the lowest PFF receiving grade (48.7) of any qualifier this past season.

Woods led all qualifying receivers in yards per route run from the slot at 2.55. He caught 40-of-51 targets for 537 yards, 22 first downs and one touchdown across his 211 routes run from the slot in 2019. His teammate, Cooper Kupp, ranked second in yards per route run (2.26) among the same group of qualifiers. Kupp caught 69 of his 99 slot targets for 853 yards, 28 first downs and five touchdowns a year ago.

Seattle Seahawks’ Tyler Lockett recorded 64 receptions from 88 targets for 901 yards, 38 first downs and six touchdowns across his 448 routes run from the slot in 2019 and ranked first in passer rating when targeted in the slot (128.1) as a result. Oakland Raiders rookie receiver Hunter Renfrow finished second behind Lockett at 126.9.

Still can't get over how awesome this play was from Tyler Lockett, what an adjustment. pic.twitter.com/61QUiCy8Xs

Both Wright and Cincinnati Bengals’ John Ross dropped 20% of their 35 catchable targets in 2019, a figure that ranked tied for dead last at the receiver position this past season.

To continue to learn more about PFF’s advanced stats,  subscribe to PFF’s ELITE subscription to dive into the numbers yourself throughout the offseason and into next season.