Below is a deep dive into the running back position. In addition to grading all of the NFL’s running backs via our advanced grading process, PFF tracks forced missed tackles, yards after contact, elusive rating and breakaway percentage in Premium Stats 2.0, our advanced statistics database made available to all of our ELITE subscribers. I’ll also highlight some advanced stats we can pull from other sources behind the scenes at PFF that we sometimes reference in articles.

PFF Elusive Rating, which pulls carries, receptions, forced missed tackles and yards after contact into a formula to calculate a rating similar to passer rating, is meant to illustrate a running back’s elusiveness in a singular number. The formula: (Forced Missed Tackles) / (Carries + Receptions) * (Yards After Contact per Attempt * 100).

Tennessee Titans’ Derrick Henry led all running backs with at least 100 rush attempts in yards after contact per attempt (4.18) in 2019. Cleveland Browns’ Nick Chubb (3.77) and Houston Texans’ Duke Johnson (3.64) finished second and third on the list, respectively. Henry also totaled nearly 400 more yards after contact than any other back in the NFL this past season. 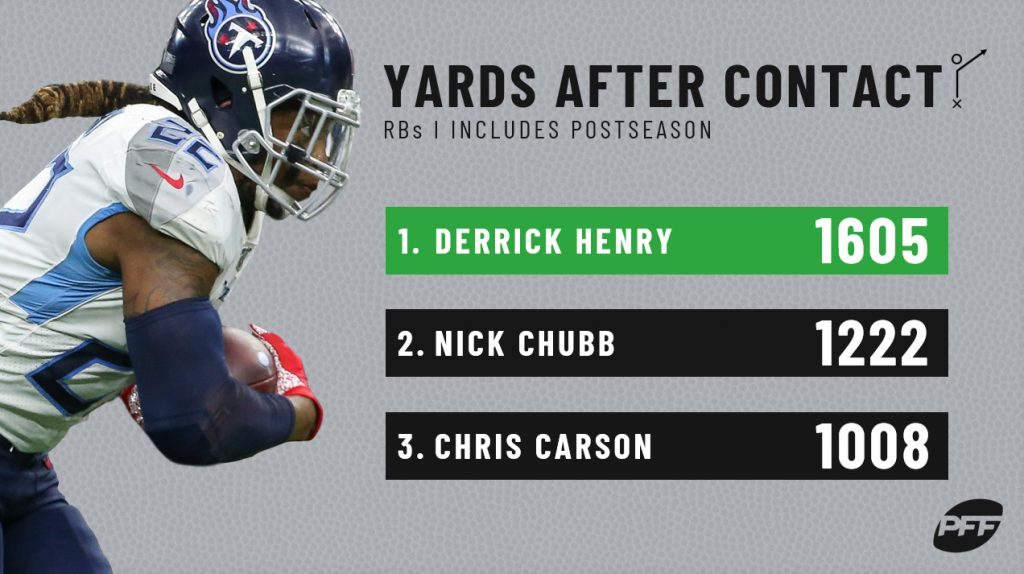 Jacobs beat out Henry, Pollard, Chubb and the rest of the NFL in forced missed tackles per touch at 0.30. Arizona Cardinals running back David Johnson finished dead last in forced missed tackles per touch (0.08) and averaged just 2.05 yards after contact per attempt in 2019. Only Chicago Bears’ Tarik Cohen (1.94) recorded a lower yards after contact per attempt average. Johnson also ranked last in PFF Elusive Rating in 2019 at 17.4.

In today’s NFL, catching the ball is just as important if not more important for running backs, so we also track receiving success for backs using the same advanced stats for tight ends and wide receivers (i.e., yards per route run, passer rating when targeted, YAC/reception, drop rate). We track yards after contact and forced missed tackles on receptions for all pass-catchers, as well.

Among the 19 NFL backs with at least 50 total targets in 2019, Vikings veteran back Dalvin Cook ranked first in yards after the catch per reception at 11.3. Cohen ranked last among the same group of qualifiers at 5.6.

Los Angeles Chargers running back Austin Ekeler not only led all at his position in PFF receiving grade (93.6), but he also led all qualifying backs in passer rating when targeted at 124.1. Ekeler caught 92-of-104 targets for 993 yards and eight touchdowns in 2019. He also dropped just two passes all season and led all qualifying running backs in yards per route run (2.74).

On the opposite end of the spectrum, Jacksonville Jaguars’ Leonard Fournette allowed 14 pressures across his 78 pass-blocking snaps and ranked last among qualifiers at his position in PFF pass-blocking efficiency (89.7) as a result.

In addition to advanced stats shown in Premium Stats 2.0, we chart intended point of attack, the actual point of attack, yards before first contact and run concept (i.e., power, outside zone, inside zone).

PFF’s point of attack charting can reveal back’s both at the NFL and college level who tend to bounce runs away from the intended hole for the play. Yards before first contact is a great figure to take into account when evaluating a running back’s vision and the success of the offensive line ahead of him.

Breida led all NFL backs with at least 100 total attempts in yards before first contact per attempt at 2.29. Conversely, Bell ranked dead last among the 45 backs at 0.56.