In addition to the above metrics, we chart first downs allowed and targets either dropped by the intended receiver or thrown off target. Forced incompletion percentage, which takes all forced incompletions (pass breakups, interceptions, tight coverage) and divides them by total targets, is also tracked outside of Premium Stats 2.0 and sometimes referred to in our articles or social graphics. Shortened to FINC% at times, this statistic gives us a great idea of which cornerbacks make plays on the ball at the highest and lowest rates. 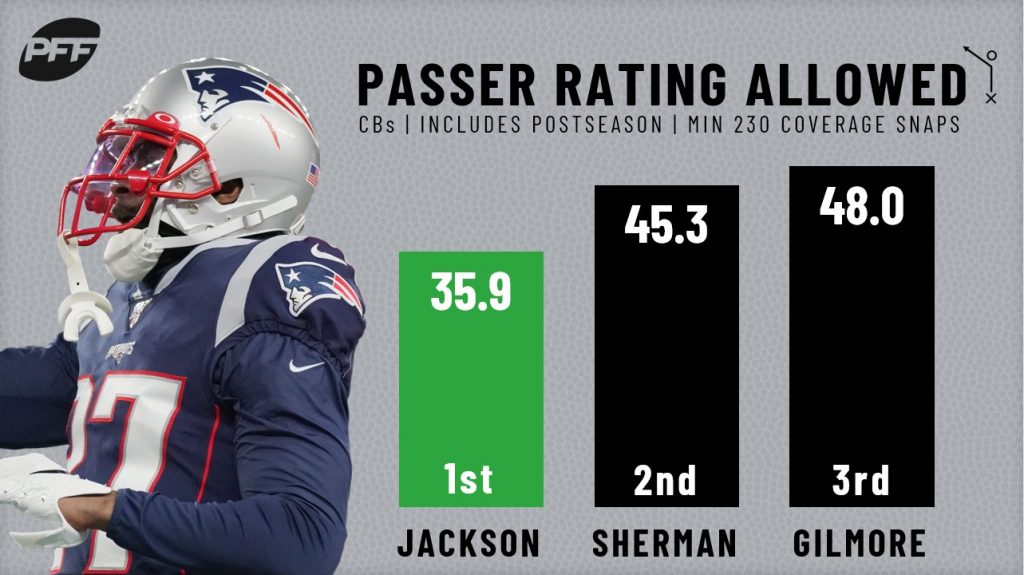 Among the 115 NFL cornerbacks with at least 30 targets in 2019 (including the postseason), New England Patriots’ JC Jackson ranked first in passer rating when targeted at 35.9. He allowed just 31 receptions from 65 targets for 328 yards, one touchdown and five interceptions. He was also the only cornerback to record a passer rating when targeted below 45.0 this past season. San Francisco 49ers’ Richard Sherman and Jackson’s teammate Stephon Gilmore ranked second and third at 45.3 and 48.0, respectively.

Dennard led all cornerbacks with at least 25 targets in the slot in passer rating when targeted from said alignment at 68.4. The Cincinnati Bengals veteran allowed just 14 receptions from 26 slot targets for 134 yards, zero touchdowns and zero interceptions across 235 slot coverage snaps. 49ers’ K’Waun Williams ranked second in passer rating when targeted from the slot (69.3) with just 323 yards and zero touchdowns allowed from 56 slot targets along with two interceptions.

No qualifying cornerback allowed a higher passer rating from the slot than Denver Broncos’ Will Parks, as he allowed 18 receptions from 26 targets for 222 yards and five touchdowns en route to an NFL-high 134.9 passer rating allowed from the slot.

Charting forced incompletions and tracking forced incompletion percentage takes understanding cornerback performance to the next level. Because yards allowed per coverage snap, passer rating allowed, etc. all include passes dropped by the receiver and off-target passes, such numbers can be inflated due to opponent error rather than the success or high-end play of the cornerback in question. Forced incompletion percentage adds context to such figures and provides a clearer picture as to which cornerbacks are making plays on the ball and creating incompletions rather than benefitting from fortunate circumstances such as a dropped pass or inaccurate throw. Coverage grade plays into such clarity, as well.

The NFL leaders in PFF’s forced incompletion percentage (FINC %) among cornerbacks with 30-plus targets in 2019 are as follows: