Charting pressures (i.e., hurries, hits, sacks) allows us to calculate pressure percentage (total pressures/pass-rush snaps) and PFF’s pass-rush productivity (PRP) metric. The formula for PRP: ((Hurries + Hits) / 2) + (Sacks) / (Pass-Rush Snaps). Unlike pressure percentage, PRP is weighted towards sacks and hits because of their added value, giving us a better opportunity to separate the league’s most valuable pass-rushers from the rest of the pack.

It’s important to note that we also don’t chart half sacks. If two defenders meet at the quarterback at the same time and bring him down for a sack, we don’t see the reason to give each of the two defenders just a half sack – we give them both a full sack. Conversely, if one defender clearly leads the charge in a sack, we don’t award any members of the clean-up crew a half sack.

PFF’s pass-rush charting goes well beyond just pressures, as well. We differentiate “unblocked” pressures and “clean-up/pursuit” pressures from pressures earned by beating the block. We also chart when a defender beats the blocker in front of him but fails to record a pressure because the ball is thrown before he can do so, which doesn’t affect his pressure percentage or PRP but does get reflected in his pass-rush grade and pass-rush win percentage.

Pass-rush win percentage and pressure type (bull rush, outside, inside, unblocked, etc.) aren’t made available to ELITE subscribers in Premium Stats 2.0 but are often referred to in articles.

Of course, defensive linemen are also called on to defend the run. PFF charts defensive stops on passing and running downs, which are recorded when a defender makes a tackle (includes sacks) and limits the offensive player from gaining 45% or less of the yards needed to move the chains on first down, 60% or less on second down or prevented from picking up the first down on third/fourth down. We then calculate the run-stop percentage (defensive stops recorded on running downs/run-defense snaps) from our stop charting for all defenders, including defensive linemen.

Our run-defense grades take into account winning blocks, affecting the point of attack for running backs and disrupting the line of scrimmage.  Another advanced stat that we track outside of Premium Stats 2.0 for run defense is first contact percentage, which takes the number of snaps on which a defender is the first player to make contact with the ball carrier and divides the snaps by the total number of run-defense snaps played.

As we’ve come to expect over the years, Los Angeles Rams star interior defensive lineman Aaron Donald led all at his position in PFF pass-rush productivity in 2019 at 8.7. He recorded 80 total pressures, including 53 hurries, 13 hits and 14 sacks, across his 539 pass-rushing snaps this past season. The only other NFL interior defensive lineman with 300-plus pass-rushing snaps that recorded a PFF pass-rush productivity above 8.0 was Kansas City Chiefs’ Chris Jones at 8.2. 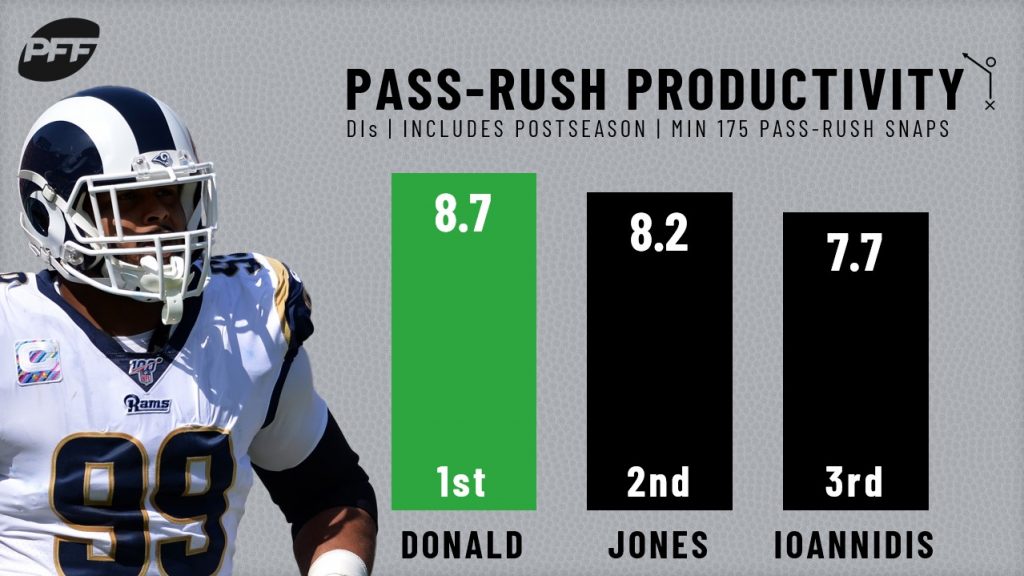 Winning pass-rush snaps early in the down, which is reflected in PFF’s pass-rush grades, is Donald’s forte. Here, he beats Seattle Seahawks guard JR Sweezy in what feels like the blink of an eye and pulls Russell Wilson down for the sack soon after. Donald picks up a pass-rush win, a pressure and a sack all in one fell swoop.