49ers CB Richard Sherman: A model of consistency over the years

What a difference a few months makes.

After losing their first eight games under new head coach Kyle Shannahan, the San Francisco 49ers sent a second-round pick to New England for Jimmy Garoppolo, who was able to win five consecutive starts to finish the season, earn a new contract and give San Francisco fans hope for the future at the game’s most important position.

Last season’s concluding run notwithstanding, the 49ers finished the season 30th in our opponent-adjusted defensive rating system and allowed the eighth-most net yards per passing play (6.6) by season’s end. After trading second-year cornerback Rashard Robinson to the Jets the day after acquiring Garoppolo, they ended the season without a cornerback who allowed fewer than 1.0 yard per snap in coverage.

Pass coverage is statistically the second-most important aspect of football, and by acquiring former All-Pro Richard Sherman, the 49ers keep pace with the upstart Los Angeles Rams in the NFC West, positioning themselves nicely for an offseason of continued improvement.

Despite missing seven games a season ago and finishing the season on injured reserve with a torn Achilles tendon, Sherman was one of the top 10 most valuable players on a Seattle team that finished 9-7 and a few missed field goals away from a playoff berth. While efficacy at the cornerback position (as measured by PFF grades, passer rating allowed, yards per coverage snap, etc.) is one of the more unstable trades in the game of football, the eighth-year pro from Stanford has been a model of consistency since day one for the Seahawks. Allowing below a 50 percent completion percentage into his coverage in all but one season (where it was 51.8), Sherman has never allowed a passer rating into his coverage of more than 75.5 (in 2017). 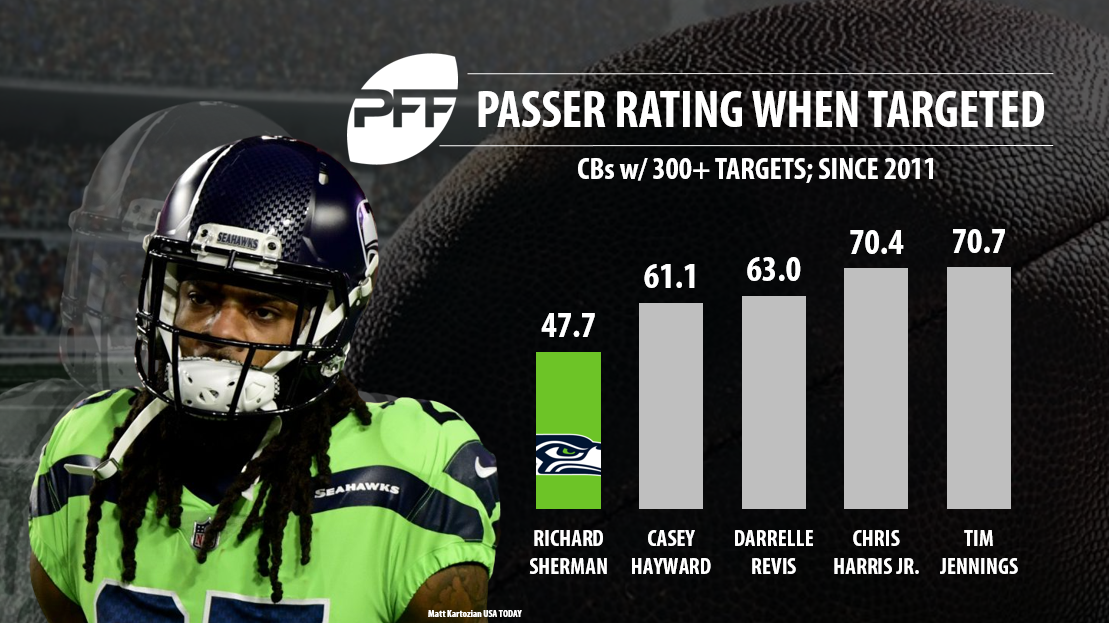 Sherman can debilitate opposing offenses by staying on the opponent’s right side for an entire game (as he did for most of 2017) or shadow their best receiver all over the field (as he did against the Jets, Falcons, Bucs, Rams and Cardinals in 2016). He’s gone 94 consecutive games without surrendering 100 yards into his coverage, and will allow the 49ers to lean less-heavily on their bets that 2017 third-rounder Ahkello Witherspoon (81.1 PFF Grade), 2017 free-agent acquisition K’Waun Williams (80.2) and veteran Jaquiski Tartt (85.8) will build upon their solid showings in 2017 as they head into a 2018 with higher expectations for team success.

What’s Next for the 49ers

Despite Sherman’s fantastic career to this point, and a talent level that still leaves him among the league’s best at the position, his play has trended (slightly) in the wrong direction of late. This, coupled with his ongoing recovery from his Achilles injury, is likely why Seattle allowed him to leave with no compensation. Be that as it may, his contract reportedly has only $3 million in fully guaranteed money which, along with the fact that the 49ers still have a top-10 salary cap situation, leaves San Francisco relatively protected should Sherman fail to live up to the standard he’s set for himself historically. 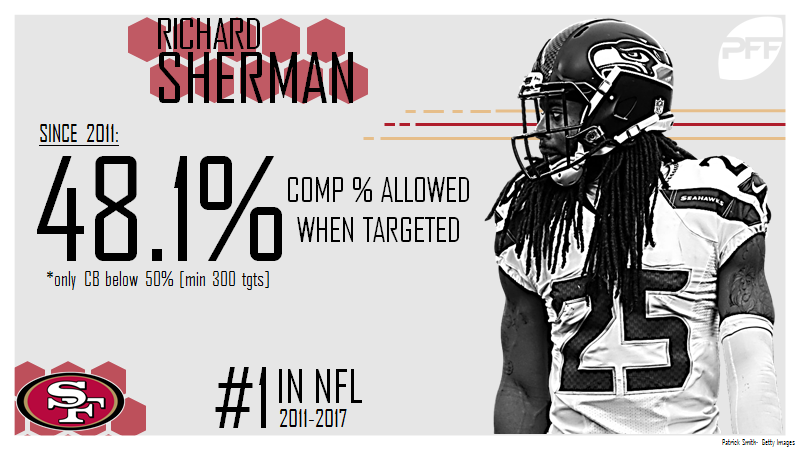 In a passing league increasingly reliant on subpackages, it would be a sage move for John Lynch and company to add one more player at the position through free agency or the draft. Luckily for them, the market has plenty of options, from inside players like Patrick Robinson, Nickell Robey-Coleman and Prince Amukamara to outside difference-makers like Brent Grimes, Truamine Johnson and Kyle Fuller, options abound should they choose to add another veteran to their stable of cornerbacks. At pick nine in the draft, players like Josh Jackson (Iowa), Minkah Fitzpatrick (Alabama) and Denzel Ward (Ohio State) are likely to be available, should they look that way.

While there are certainly question marks about Sherman’s health and the 49ers defense in general, there’s no doubt he can have a substantial impact on the 49ers fortunes in the NFC West in 2018. Pass coverage is the most-important aspect of defensive football, and the very best players can ring in around a win or so above replacement level. If Sherman has that kind of impact, and Garoppolo fulfills his lofty expectations, look for San Francisco to bring an excitement to their fan base unseen since Sherman effectively ended the Jim Harbaugh era with his signature pass breakup in the 2013 NFC Championship Game in Seattle.