BALTIMORE, MD - DECEMBER 13: Cornerback Richard Sherman #25 of the Seattle Seahawks looks on against the Baltimore Ravens in the fourth quarter at M&amp;T Bank Stadium on December 13, 2015 in Baltimore, Maryland. (Photo by Patrick Smith/Getty Images)

Last season, the Carolina Panthers pulled the franchise tag from star cornerback Josh Norman in late April after most of the available money was spent in free agency. While Norman was eventually able to secure a five-year, $75 million deal from Washington, and proceeded to have a decent season (although one that was marred by 16 total penalties), it’s interesting to wonder where he could have landed had he hit the open market with everyone else. With reports that the Seahawks are considering trading star cornerback Richard Sherman, we have another offseason where one of the league’s best players at the position is possibly on the move, at a time where much of the free-agent money was spent on cornerbacks A.J. Bouye and Stephon Gilmore last month.

While it might be tempting for a team with some available cap space (or its fans) to reflexively jump at the opportunity to trade for one of the best corners of his generation, some context is necessary here. For starters, while Sherman remains a top player at his position, his play has slid a bit in recent years, causing an increase in the number of targets he’s seeing per passing snap, as well as an increase in his passer rating allowed (albeit to what is still a very good number at 68.4 in 2016). This has coincided with Seattle slipping as a whole in pass defense, from first in the league in net yards per passing attempt allowed each season from 2012-2014, to 15th a year ago. The latter can possibly be traced to a revolving door of players the Seahawks have had at right cornerback since Byron Maxwell and Brandon Browner left as free agents, but the correlation with Sherman’s play is nontrivial, as well.

The Seahawks’ ability (or likely, inability) to replace him notwithstanding, where would optimal landing spots for Richard Sherman be? Aside from the necessary draft capital and cap space, a team willing to pay Sherman the roughly $27 million he’s owed over the next two years and/or extend his contract after a trade will be paying for the cornerback that he will be in 2017 and beyond, not the one he has been since taking off in 2012. For a player who just turned 29 yesterday, and whose play is on the slight decline, a familiar system is probably the one for which he would mostly likely to maintain his stellar level of play. No team ran more cover-3 than the Seahawks a year ago (53.02 percent of all passing snaps against), and 89.6 percent of their defensive snaps were in either cover-0, 1, or 3, which was highest in the league by 8 percentage points. These are coverage schemes for which Sherman is the prototype cornerback.

While it’s difficult to predict where players will go (if they go at all), teams with coverage profiles similar to the Seahawks, as well as proper ammunition and motivation, would likely be the ones to come ahead in such a sweepstakes. Here we list three teams that make sense to me as trade partners for the Seahawks and Richard Sherman.

The Titans were a respectable 18th in net yards allowed per passing attempt a season ago, but this was due far more to a defense that ranked in the top 10 in our pass-rushing grades than for any standout performances on the outside. While Tennessee did invest $30 million over three years for former Patriots CB Logan Ryan, they still have over $35 million in available cap room, as well as two picks in the first 18 selections of this month’s draft. While the Titans only ran cover-3 on 23.6 percent of pass-coverage snaps (24th in the league), they ran cover-0 or 1 on 41.8 percent of such snaps (fifth), making the fit of Sherman a palatable one. Such a trade would allow the Titans to move Ryan into the slot on nickel downs, where he would be an upgrade over Brice McCain, who allowed six touchdowns (and a 104.6 rating) from there a year ago.

While Pittsburgh spent a first-round pick in 2016 on Artie Burns, and William Gay played relatively well in the slot (allowing just an 84.3 rating) a year ago, the Steelers struggled in coverage when it mattered most, allowing 384 yards and three touchdowns on just 42 attempts to Tom Brady in the AFC Championship. The Steelers ran cover-3 on 41.1 percent of their pass-defense downs a season ago, the fifth-highest rate in the league, and have almost $16 million in cap space if they want to improve their defense enough to make one more run with a quarterback that has flirted with retirement this offseason. The Steelers own four picks in the first 105 of next-month’s draft, and may also have the relatively-fluent futures of the franchise-tagged Le’Veon Bell and suspended Martavis Bryant in the back of their minds moving forward.

It seemed far-fetched for the Patriots to make a play for a big-name cornerback when free agency started, and now that they’ve spent the money for Stephon Gilmore and traded their first-round pick for WR Brandin Cooks, at first blush, the idea of Sherman to the Patriots is a laughable one. However, the Patriots still have over $20 million in cap space, two third-round picks, and 27-year-old RFA cornerback Malcolm Butler as assets in a potential swap. It was only three offseasons ago that Belichick went out and rented Darrelle Revis for a season, and he responded by allowing just 51.8 percent of passes into his coverage to be completed, intercepting three passes, breaking up another 12, and helping the Patriots claim their first Super Bowl title in a decade. Given that the amount of dead money on Sherman’s contract falls to a little over $2 million after the 2017 season, a similar play by the Patriots this offseason doesn’t seem so intractable after all.

CB Richard Sherman over the course of his career 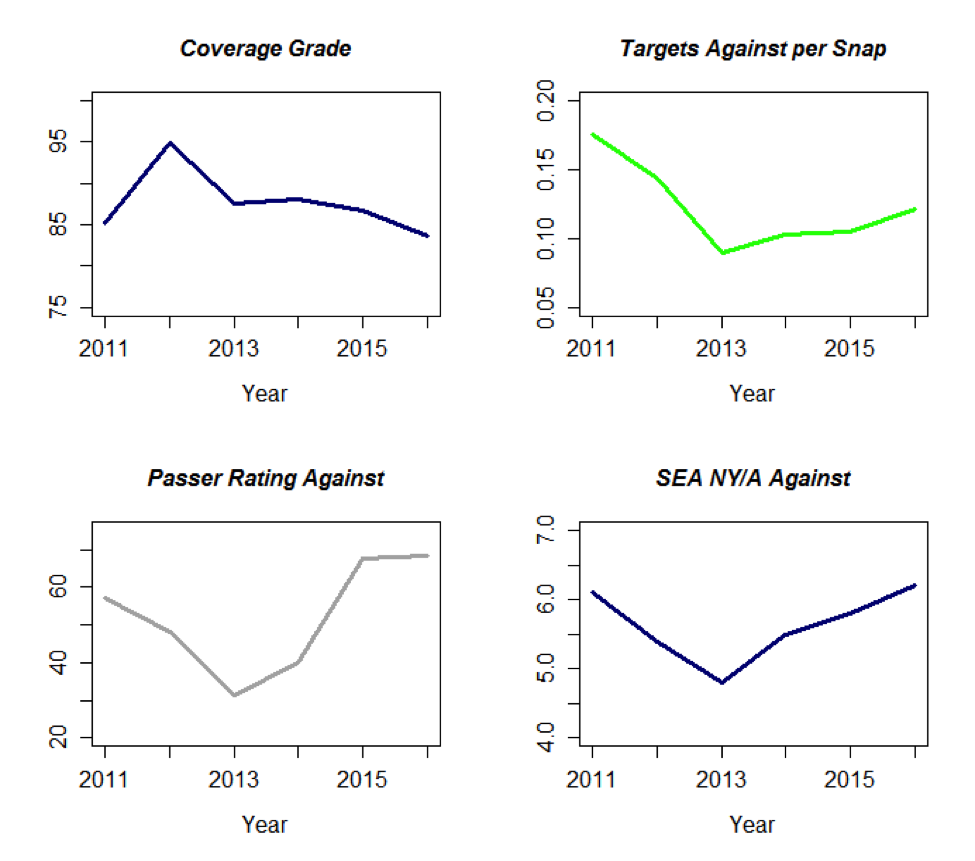