The Los Angeles Rams have a lot of important pieces set to hit free agency. Seven of the 13 players set to become unrestricted free agents were regular starters or had started at some point in 2017. Five of those seven players combined to play over 3,200 snaps on the defensive side of the ball. Four of those five combined for over 2,250 snaps in the secondary. Safety John Johnson III and cornerback Kayvon Webster are the only two starters in the secondary under contract next season. And Webster's ruptured Achilles adds an extra wrinkle to the team's free agency game plan as well.

The Rams do, however, have a good amount of cap space available to them. They should be able to keep their safety duo intact while also keeping the wide receiver core together for the 2018 season. The interesting part will be what they do about their cornerbacks with the upcoming free agent class. 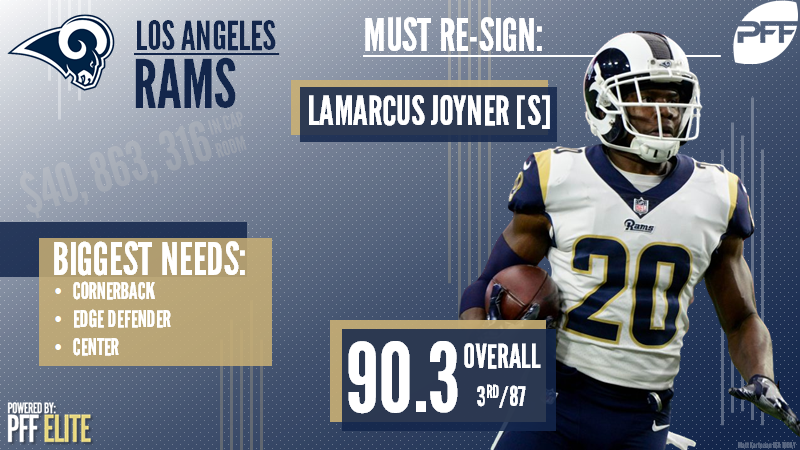 In his first season playing safety in the NFL, Joyner saw his highest-graded season by almost 12 points. He finished as the league's third-highest-graded safety and tied for first in coverage grade at 92.2. On 406 coverage snaps, opposing quarterbacks targeted Joyner only 28 times. He allowed 12 of those targets to be complete while intercepting three of them and defending five more of those for a passer rating of 31.8 in his coverage. His 0.36 yards allowed per coverage snap ranked 12th among 59 safeties. He was also one of only two safeties to not miss a single tackle in the passing game and he only missed three in the running game. Averaging 17 tackle attempts in between missed tackles combined, Joyner owned the sixth-highest tackling efficiency among all safeties. Though it was his first season at a new position, Joyner was one of three safeties to earn an elite grade (90.0-plus) and it would be criminal to let him walk.

Before missing both the 2015 and 2016 seasons due to Achilles injuries, Galette produced the ninth-most pressures across the 2013 and 2014 seasons among edge defenders with 126. His 22 sacks in that time were tied for seventh-most, as well. This past season, Galette earned the second-highest grade of his career (82.4), tied for 31st among 106 edge defenders in 2017. His 37 pressures on 251 pass-rushing snaps resulted in the 14th-highest pass-rush productivity )11.9) among edge defenders. The Rams desperately need someone outside of Aaron Donald to generate pressure, as he has been responsible for over 36 percent of the team’s total pressures since 2015. Pairing these two with Robert Quinn, who produced 18 of his 38 quarterback pressures in his final four games of the season could be devastating to opposing offenses come 2018.

After moving Michael Brockers from nose tackle to a 3-4 defense end, the Rams’ three players at nose tackle combined for 18 run stops on 319 run snaps. That’s one fewer than Poe was able to generate on 298 run snaps in 2017. Before a down season in 2016, Poe had four straight seasons with at least 22 run stops, with a peak of 30 in 2013. Since Wade Phillips came to town and changed the defensive scheme to a 3-4 base, the Rams have been playing light at the nose tackle position. Should they look to the open market to fulfill the position, Poe would change that, as he is a massive 6-foot-3, 346-pound player. Given that he’d be in between Brockers and Aaron Donald, two players ranked in the top-12 in run-defense grades among interior defenders, the Rams’ 31st-ranked PFF run defense would surely take a huge leap in 2018. Poe also ranked 26th among all interior defenders in pass-rush grade (77.0), which he earned with his career-high 39 pressures.

In his first two seasons, Fuller allowed almost as many touchdowns (10) as he had plays on the ball (13). This past season, he earned his highest-graded season at 84.3, 22nd among 121 cornerbacks. He saw a league-high 119 targets while averaging the second-fewest coverage snaps in between targets at 4.8. Despite being targeted so much, Fuller allowed the 14th-lowest passer rating into his coverage with a 69.0. He also generated 17 pass breakups, two more than any other cornerback in the league. The one part about Fuller’s game that took a step back was his tackling. He led all cornerbacks in the league in missed tackled with 21, seven more than the next highest player. At 25 years old, Fuller is a very interesting player worth looking at in free agency.