Now that we're almost two days removed from Super Bowl LIV, the offseason is officially in full swing for the league's 32 teams. We at PFF have been getting ahead of the curve with the launch of our 2020 Draft Guide and new Free Agency Rankings tool, which allows you to sort by position and team needs and includes contract projections from OverTheCap as well as historical grades and wins above replacement (WAR) numbers for the past three seasons.

I am also doing a series of articles that will go through our top-four ranked free agents at each position (excluding QBs), using their past stats to match them with historical players. Once we have a sample of similar players, we can see how those similar players performed in subsequent seasons to get an idea of the current player's range of outcomes.

This system is similar to FiveThirtyEight's CARMELO player projections, only it is applied to football and uses PFF's WAR metric as the proxy for player value.

In earlier research, I looked at historical WAR and salary cap figures to derive the approximate cost of a win. Adjustments to our WAR calculation and the ever-rising NFL salary cap have moved the current estimate for the price of a win for spending on unrestricted free agents at 34.2% of the cap, or $68.4 million based on an assumed 2020 cap of $200 million.

Buying wins in free agency is an expensive proposition, but the value of each incremental win for a playoff-caliber team cannot be understated. This year, teams are going to have tough decisions on how to spend that money. The first installment on wide receivers, then running backs and tight ends, offensive linemen, defensive interior, edge defenders and off-ball linebackers have already been published. In this article, we're forecasting free agents at the safety position.

For each of the safeties below, the closest comparable players were found by measuring the similarity between them based on several features: age (within one year), WAR, previous-year WAR, PFF coverage grade, PFF run-defense grade, free safety alignment frequency and WAR per snap over the past two seasons.

The most similar players across these metrics are grouped together to calculate the expected WAR numbers for 2020 and 2021, with the weight of each comp reflecting the level of similarity. I didn't use the same number of comps for all players, as it is more difficult to find a wide range of comparable seasons for older and particularly unique players. 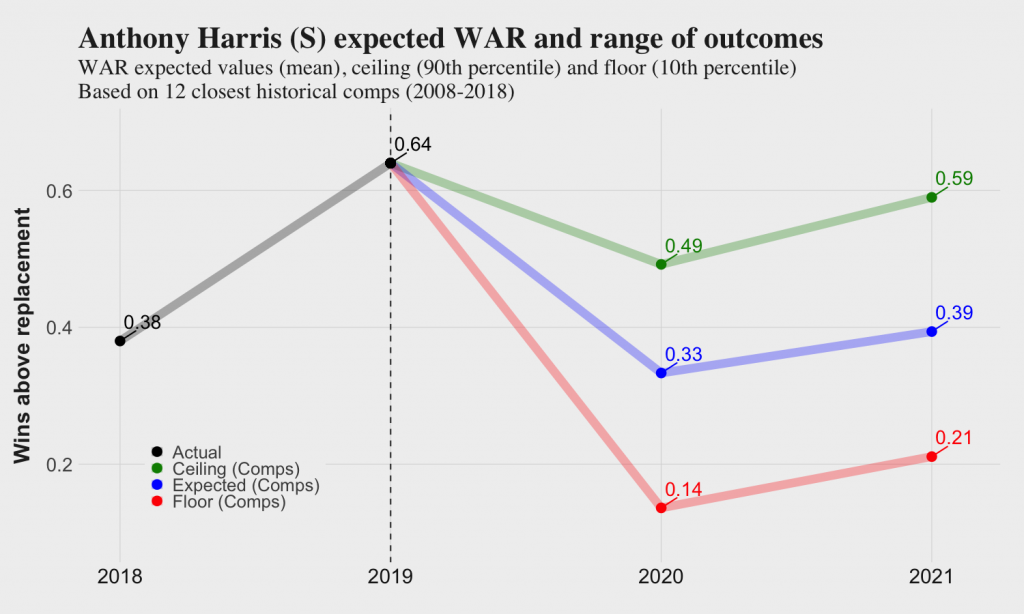 Harris has been one of the most impactful safeties in the NFL over the last two seasons, trailing only Jamal Adams, Devin McCourty and teammate Harrison Smith in total WAR generated. After spending big to retain Stefon Diggs, Adam Thielen, Anthony Barr and others in recent years, the Minnesota Vikings will have to make hard personnel decisions this offseason, and Harris could be one of those they decide to let go. Our projections have Harris' WAR generation falling in the next two seasons, though it's still at an expected high level of roughly 0.70 over two seasons.