“Streaks” are the cotton candy of fantasy football. There’s no actual value inherent in them by themselves, but they are fun and enjoyable, and you’ll never regret a slight indulgence from time to time.

In other words, you aren’t going to come away from today’s piece with the exact knowledge you need to dominate your fantasy league in 2019. But you might have a little nutritionless fun.

Averaging 10 PPR points per game over a season is not actually that hard. There were 105 different flex players (RB/WR/TE) who did so last season, ranging from a high of 26.3 (Todd Gurley) to a low of 10.0 (Jalen Richard). In other words, this isn’t the elite of the elite. Averaging 10 PPR points is more like the minimum threshold you need to be considered fringy relevant.

Doing it over multiple years, though, shows sustained relevance. It’s one thing to say Elijah McGuire averaged 11.3 points per game in 2018. But with Le’Veon Bell around for 2019, the odds are against him reaching a streak of even two years. It’s another to say, to name a name, that Lamar Miller has done it for five straight years. Miller hasn’t been a star in Houston by any means, but he’s held himself firmly in the conversation, which is all we’re looking for here.

So below, I’m taking a look at the streakers — the players who have put up double-digit PPR points multiple years in a row, and whether they are in place to do it again in 2019. There’s no minimum-games threshold other than “1,” because this is more about in-game opportunity, and if a player puts up double-digit points in a single game and then gets hurt, well, he still had opportunity.

Like I said at the top, this isn’t the be-all, end-all. Saquon Barkley is obviously working on only a single-year streak, and that doesn’t make him less valuable than Miller’s five-year in any conceivable way. It’s just interesting.

Twenty players are currently working on double-digit streaks of exactly two years. A big chunk of those have done so in their first two years in the league

Hunt will miss a big chunk of the season, which doesn’t impact his per-game average, but could leave him on the outside looking in when it comes to playing time on his return. … Anderson is close to a relatively sure thing, but the arrival of Le’Veon Bell and Jamison Crowder and any more changes the Jets make could push him down. … Lewis could lose work to Derrick Henry based on how Henry finished 2018. … Kupp would be a sure thing if we knew he was healthy, but there could be an easing-in for him as he returns. … Agholor is at best fourth on the Eagles’ target pecking order. … Collins doesn’t even have a job. … Will Eric Ebron fully supplant Doyle? … Gordon might not ever see the field again. … Sanu has been low-key extremely consistent with the Falcons, but further development from Calvin Ridley could hurt him. … Lynch might have played his last snap. … Drake’s fortunes depend on if the Dolphins will fully commit to him.

We have nine players working on three-year streaks, including five in their first three years in the league.

Howard should get the first crack at the lead work in the Philadelphia backfield, but he’s been increasingly unimpressive over his career, is entering what could be a bad fit with the Eagles, and has a lot of guys gunning for his role. … Coleman got a decent contract from the 49ers, but battling Jerick McKinnon and Matt Breida for touches could limit his upside. … Shepard has an increasingly poor quarterback and now has to contend with Golden Tate filling much his same role.

It gets more exclusive in this range. There are six players on a streak of exactly four years. Amari Cooper’s presence on this list despite his very down 2017 is proof of how a single appearance on this list isn’t exactly conclusive of anything beyond mere relevance.

Ginn might be the most surprising name to be working on any kind of streak, and he’s already at four years. He has 20 touchdowns over the last four years after 11 total over the first eight years of his career. He’s low on the Saints’ totem pole, though, so he is only hoping to sneak into the list. … Jones should come back healthy in 2019, but with the Lions seemingly committed to the run and Kenny Golladay locked into the No. 1 role, he’s got some work to do.

Here’s where we get to the big names. Nine players have streaks of exactly five years.

The three longer shots are only “long shots” relative to the sure things at five years, but there are warning signs. Miller has been a disappointment with Houston, to the point that no one would be surprised if the Texans invest a draft pick in a rookie at the position. And of course that line remains abysmal. … Ingram is heading to possibly the run-heaviest team in the league in Baltimore, but he won’t get much chance in the passing game, will have Lamar Jackson and a crowded backfield to contend with, and the Ravens are reportedly still looking at more backs. … Baldwin’s health is going to be the key factor for him, as we still don’t know if he’ll be 100%.

Only two guys make it at six years, and you’d have to think they’re both pretty safe.

If Alshon Jeffery doesn’t make the list again, it will be because DeSean Jackson has a renaissance year back in Philadelphia. But you’d almost certainly bet on him to continue. … Keenan Allen should be a totally safe entry here.

Again, only two guys make the list, and both have been very good.

T.Y. Hilton appears as safe as they come here, firmly entrenched as the Colts’ No. 1 target. … Tate is a slightly longer shot, just because he’s now on a Giants team without a strong quarterback and won’t be able to be the slot monster he has been in the past alongside Sterling Shepard.

Stars! There are actually five players working on streaks of exactly eight years.

If both Gronkowski and Thomas have played their last NFL snaps, no one would be surprised. But if Gronkowski unretires in Week 10 and/or Thomas recovers from his torn Achilles and pops back up somewhere in midseason, you shouldn’t be surprised either. I wouldn’t bet money on either of them continuing this streak, but I wouldn’t bet hard against them either. 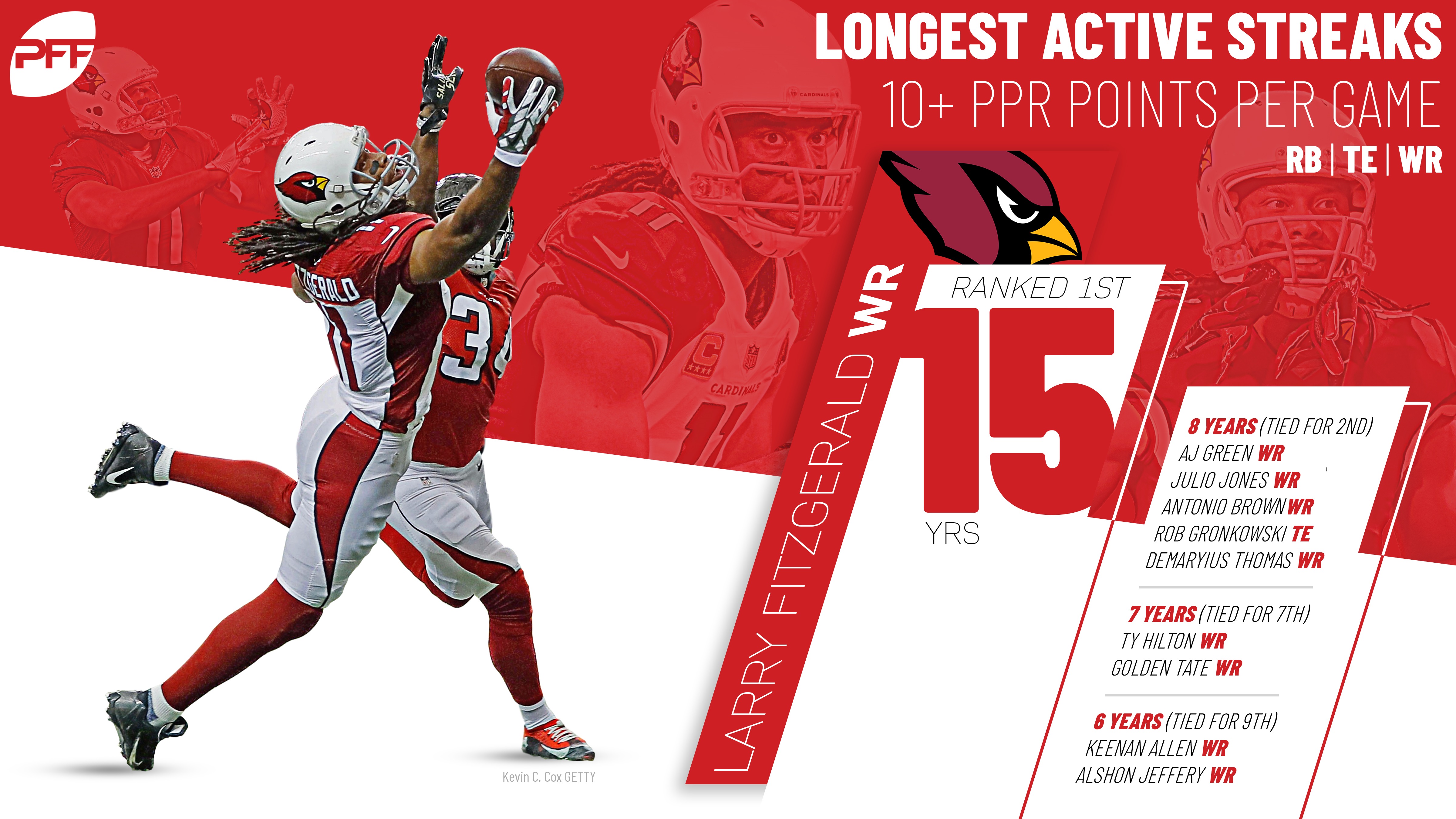 This deserves a hearty LOL. Yes, Jones, Green, Brown, Gronkowski, and Thomas are all tied with the second-longest active streak, and the only streak longer than theirs is almost twice as long.

Larry Fitzgerald has been in the league for 15 years and has double-digit fantasy points in all of them. And with at least 13 games played in every year of his career, these weren’t cheapies, either. Last year, at 11.2 points per game, was the second-worst average of his career, ahead of only his 11.0-point 2014, but with a new, offensive-minded head coach in Kliff Kingsbury and either development from Josh Rosen or a dynamic rookie in Kyler Murray, you’d be silly to bet against Fitzgerald making it to 16 in 2019.