Love it or hate it, the NFL preseason can give you lots of insights into what to expect in the regular season. Sure, the teams use vanilla offenses and the starters barely play, but the usage can paint an interesting picture that provides valuable fantasy football intel. With the third week of the preseason now in the rearview mirror, here’s what the Week 3 snap data says about what to expect for all 32 NFL backfields. 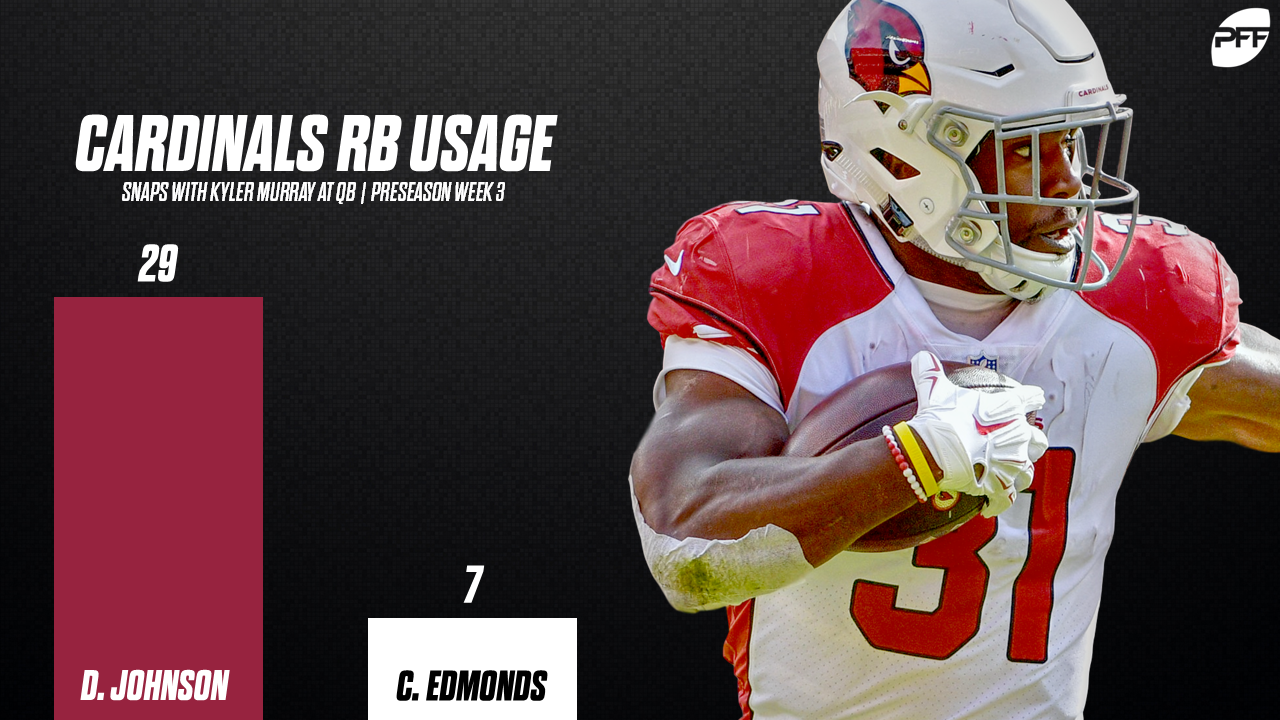 David Johnson was on the field for 29 of Kyler Murray’s 36 snaps. Chase Edmonds played the other seven snaps. Johnson is locked in as the feature back with Edmonds as the clear handcuff.

Devonta Freeman and Ito Smith split time with the first-team offense. Freeman got the first reps, playing seven of the first eight offensive snaps. Then Smith came in and logged 17 snaps with Matt Ryan on the field. We also saw Brian Hill sprinkled in for six snaps with the first team. It appears likely that these are the top three backs with Smith on the short side of a committee with Freeman.

Justice Hill dominated the usage share with 37 snaps in Week 3. However, it’s important to note that Mark Ingram, Gus Edwards, and Kenneth Dixon did not dress for this contest. Dixon was reportedly dealing with a knee injury, so his future with the team is still up in the air. We’ll likely see Ingram as the lead back with Edwards as his handcuff. That means Hill is at best a super-deep dart throw to start the season.

LeSean McCoy and Frank Gore rotated series with the first-team offense, with McCoy logging 17 snaps and Gore finishing with 10. Rookie Devin Singletary was only on the field for one snap with the first team. Of course, Singletary made the most of that one play with a nine-yard score. Interestingly, that was his only snap of the game, as T.J. Yeldon came on with the second team in the third quarter. This backfield is one of the bigger question marks in the league. We could certainly see a roster move this week. Stay tuned.

Christian McCaffrey was on the field for the Panther’s first 11 snaps before his night was over. Jordan Scarlett and Reggie Bonnafon split reps for the remainder of the game. McCaffrey is locked and loaded as the lead back and there really isn’t any competition for touches on the current depth chart.

The Bears rested their starters, so Ryan Nall was the first man up. Nall may be worth a taxi squad spot in deep dynasty rosters, but this backfield is clearly going to be a combination of David Montgomery, Tarik Cohen, and Mike Davis.

Joe Mixon didn’t dress for this contest, so it was Giovani Bernard as the every-down back to open the game. Bernard played the Bengals 10 snaps, but Rodney Anderson was on the field for three first-team snaps at the end of the first quarter. Bernard figures to be the Mixon handcuff, but Anderson’s dynasty arrow is pointing up.

The Browns continued to get a long look at Kareem Hunt in Week 3. With Nick Chubb and Dontrell Hilliard resting, Hunt was on the field for the first 29 offensive snaps. Chubb is inked in as the lead back with Hilliard likely to get his share of the passing work over the first eight games. However, this backfield will certainly get much more complicated when Hunt returns from suspension.

For the second straight week, Tony Pollard was the only running back on the field with Dak Prescott. His usage suggests the Cowboys do in fact view him as an every-down replacement if Ezekiel Elliott’s holdout lasts into the season. If/when Elliott rejoins the team, Pollard will slot in as one of the better handcuff options.

None of the starters dressed for Denver in Week 3, but we did see Phillip Lindsay, Royce Freeman, and Devontae Booker all play with the first team in Week 2. That means we’re likely to see a three-headed backfield committee with either Booker or Theo Riddick serving as the third wheel. That unfortunately puts a damper on the fantasy outlooks for Lindsay and Freeman just given the potential lack of touch volume.

Kerryon Johnson got the first crack Thursday night, but C.J. Anderson was on the field for 23 of Matthew Stafford‘s 33 snaps. Johnson only played eight snaps. Both Kenny Golladay and Marvin Jones played 32 of Stafford’s snaps. While many view Johnson as the clear lead back, the preseason usage suggests Anderson will be involved this season.

No first-teamers for the Packers. Aaron Jones and Jamaal Williams remain locked in as the top two options in the Green Bay backfield. The question here isn’t if Jones will be the lead back, but rather how much he’ll be used.

Duke Johnson didn’t suit up for the Texans this week, but after Lamar Miller’s injury we saw Taiwan Jones, Karan Higdon, and Josh Ferguson all get reps in the first quarter. Damarea Crockett didn’t get on the field until the second quarter, but he did play every Texans snap that quarter. We then saw Higdon run as the lone Texans running back in the third quarter. Johnson is slotted in as the lead back for now, but we’ll keep a close eye on the roster moves around the league at running back. The Texans could certainly bring in a veteran to share the load.

The Colts rested their starters. Marlon Mack is locked in as the lead early-down back with Nyheim Hines handling passing downs.

Nick Foles was on the field for the first Jags’ first 19 snaps in Week 3. Of those snaps, Leonard Fournette played 18. There’s been plenty of chatter in the preseason about Fournette being an every-down back. This usage suggests there’s potentially some truth to those rumors. If Fournette can stay healthy and on the field, he has a good shot of outplaying his ADP.

Damien Williams looks to be locked in place as the lead back to open the season. He played eight of the Chiefs’ first 10 snaps. Darrel Williams was on the field for the other two and got one more snap with the first team. Darwin Thomson was the third back on the field, but did play with the first team, logging five snaps with Patrick Mahomes under center. Talk that Thompson has passed Carlos Hyde looks to be very true. Hyde’s fist snap didn’t come until 3:36 left in the third quarter. Thompson is now the favorite to handcuff Williams. 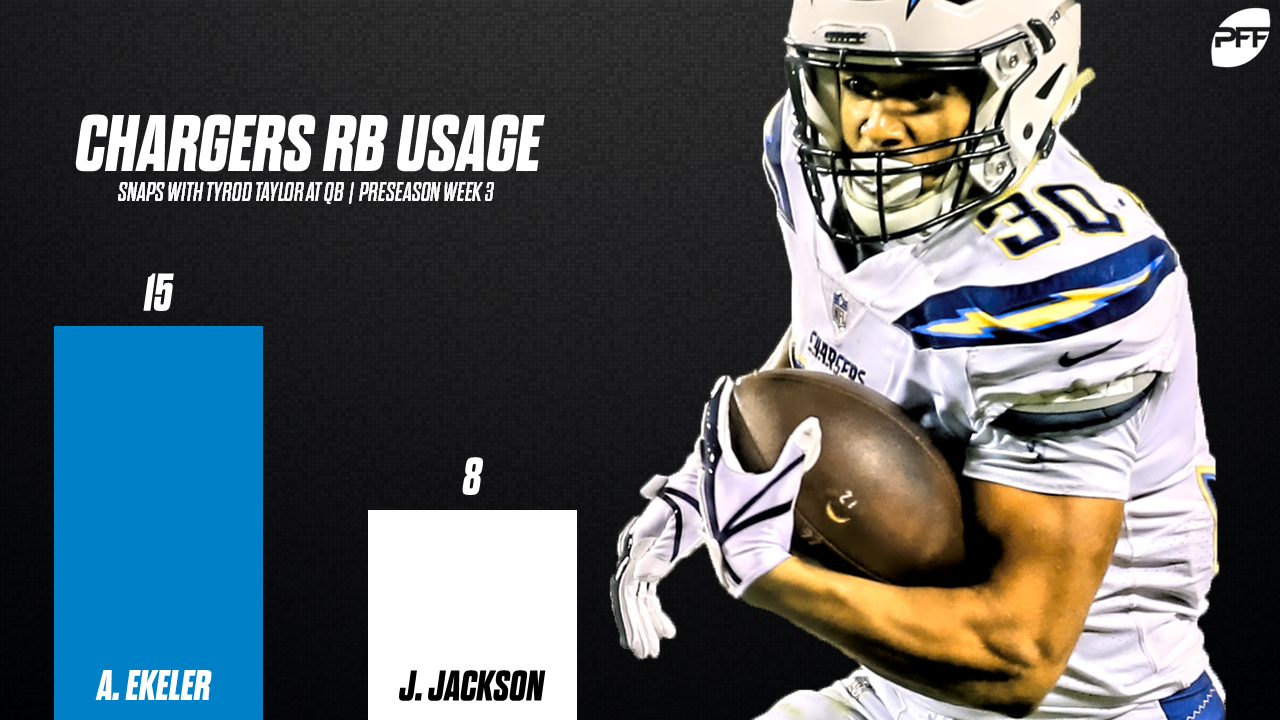 With no end in sight for Melvin Gordon’s holdout, all eyes are on Austin Ekeler and Justin Jackson. Philip Rivers didn’t dress, but Ekeler saw 15 of Tyrod Taylor’s 23 snaps. Jackson handled the remaining eight snaps, and then stayed on for seven snaps with Cardale Jones. Despite talk that these two were in a committee, the usage suggests Ekeler is well ahead of Jackson. He’s clearly the preferred fantasy option.

We knew we weren’t going to see Todd Gurley, but we also didn’t see Malcolm Brown in the third preseason game. On the other hand, Darrell Henderson was on the field for the Rams’ first 25 snaps. Henderson appears to be positioned as the No. 3 behind Gurley and Brown.

Kalen Ballage didn’t leave the field in the first half. He also didn’t play particularly well. Despite the hype surrounding Ballage, Kenyan Drake is still the better fantasy bet in the Miami backfield.

Dalvin Cook saw the first five offensive snaps, but his day was done very quickly following his 85-yard touchdown. Alexander Mattison was the next man on the field, playing 11 snaps with Kirk Cousins. Ameer Abdullah also saw first-team action with eight snaps. Abdullah also got some work with the second-team, but it was primarily Mike Boone on the field with Sean Mannion under center. At this point, Mattison is the runaway favorite to handcuff Cook.

Tom Brady played a quarter-and-a-half in Week 3, and we saw three running backs on the field during that stretch. None of those backs was named Damien Harris. Sony Michel, James White, and Rex Burkhead got the work with the first team. Harris didn’t come on the field until Jarrett Stidham took over midway through the second quarter. Michel appears to be healthy and is poised to carry the early-down load with White doing his thing on passing downs. Harris is only a handcuff as we enter the season.

The Saints only ran eight plays with Drew Brees under center, but Alvin Kamara was out there for all of them. Latavius Murray didn’t play, so Dwayne Washington was the second back on the field followed by Devine Ozigbo. The two rotated with the second team offense on the field. Kamara and Murray are locked in as the Nos. 1 and 2 in this backfield.

With Saquon Barkley not in uniform, Wayne Gallman played all but one of the 14 first-team snaps. If you’re going to handcuff Barkley, Gallman is your guy.

The Jets also sat their starters with Le’Veon Bell not in uniform. Yet again, we saw Ty Montgomery dominate snaps with the first team. Montgomery played all but five of Sam Darnold’s snaps. He’s run away with the No. 2 job and should be viewed as Bell’s handcuff.

There wasn’t a starter in sight for the Raiders in Week 3. Josh Jacobs is locked in as the starter with Jalen Richard likely to see some passing-down work.

Doug Pederson sat Miles Sanders, Jordan Howard, and Darren Sproles in this contest. Sanders and Howard will split the load early in the season, but look for Sanders to start to emerge and take over this backfield by the second month of the season.

James Conner played 14 of Ben Roethlisberger’s 19 snaps. Jaylen Samuels was on the field for three snaps with Roethlisberger. Conner is set to again be a three-down bell cow for the Steelers with Samuels serving as his handcuff.

As expected, Kyle Shanahan split reps between Tevin Coleman and Matt Breida. Coleman notched 25 snaps in the first half, and Brieda was on the field for 14. Coleman is the preferred option for fantasy purposes, but Breida’s upside keeps him in the flex conversation.

After dominating snaps with the first team in Week 2, Chris Carson got the first series and played five snaps. Rashaad Penny then took over and stayed on the field until the middle of the second quarter. C.J. Prosise got Russell Wilson’s final series, playing five snaps with the first team. Carson has pulled away from Penny and is now a front-end RB2. Penny remains in the RB3 conversation as a premium handcuff. And maybe, just maybe, Prosise still has some dynasty value.

Peyton Barber and Ronald Jones rotated series with the first-team offense. Barber will continue to get the bulk of the carries with Jones seeing time on passing downs. If Jones doesn’t hack it, Dare Ogunbowale could emerge as the passing-down option.

Still no Derrick Henry for the Titans, but he should be ready to roll for the season opener. Look for Tennessee to pound him on the ground with Dion Lewis getting passing-down work.

Adrian Peterson didn’t play in this contest, which would suggest that he should open the season as the starter. But Peterson isn’t the preferred fantasy option. Derrius Guice played 19 of Case Keenum’s 31 snaps in Week 3. Guice is returning from injury, but the young back has major upside even in an offense that could struggle at times.