As we head into Week 6, it’s time again for our weekly look at the fantasy football players on the rise or fall in the weekly rankings.

Each week before you can turn the page to your next fantasy matchup you need to do a final assessment of your learnings and how they impact the value of players. It will set the stage for you in hitting the waiver wire, setting your lineups and maybe even hitting the trade block.

In this weekly feature we will dive into the numbers and look at some of the players who are moving up and some that are moving down. We will start the process of determining next week’s rankings based on their performance turned in during the week we just wrapped up.

Here’s a look some fantasy rankings risers and fallers as we close out Week 5 by position ranked by amount of increase:

Rodgers look healthier in his matchup with the Lions as he delivered the elite fantasy type of performance owners expected when they invested heavily on draft day. Playing from behind in Detroit, Rodgers threw for 442 yards and three touchdowns. … Game flow also helped Luck in his cause at returning to the QB1 conversation. The Colts’ passer completed 38 of 59 passes for 365 yards, three touchdowns, and two picks. It was second straight 300-yard performance and his 9.1 average depth of target over the past two contests is a vast improvement. … Brady is starting to get all of his weapons back in the fold and that helped the veteran turn in his best day of the season in Week 5. He tossed three touchdowns, including the 500th regular-season touchdown pass of his career in the win over Indy. … Both Darnold and Manning had solid outings this weekend. Darnold completed 10 of 22 passes for 198 yards, three touchdowns and an interception in a win over Denver. Manning completed 22 of 36 pass attempts for 326 yards, two touchdowns and two interceptions during a loss to the Panthers. Both make for decent QB2 options moving forward.

Crowell had a career day against the Broncos and now has five rushing touchdowns though five contests. He’s been a very boom-or-bust performer with three games of 19-plus fantasy points and two others where he failed to reach six points. … Johnson has seen 20 or more touches in back-to-back weeks and it has led to a bit of a resurgence of his RB1 status. The three scores have helped, but Johnson still needs to improve on some of his other metrics (3.2 yards per carry/8.1 yards per target) to return to elite status. … The Patriots have two running backs who are weekly starting options moving forward in Michel and White. Michel has registered 210 rushing yards on 43 carries the last two weeks and scored in each game. White is second to only Alvin Kamara in running back targets (40) and is averaging 4.8 yards per carry. He even ran for a TD last week. … With Matt Breida adding a high-ankle sprain to his array of injuries in Week 5 look for Juszczyk to see an increase in snaps and targets. … Owners were reminded once again that Blount is worth a roster spot in deeper leagues as an emergency bye-week filler as he clearly is the goal-line guy in Detroit. 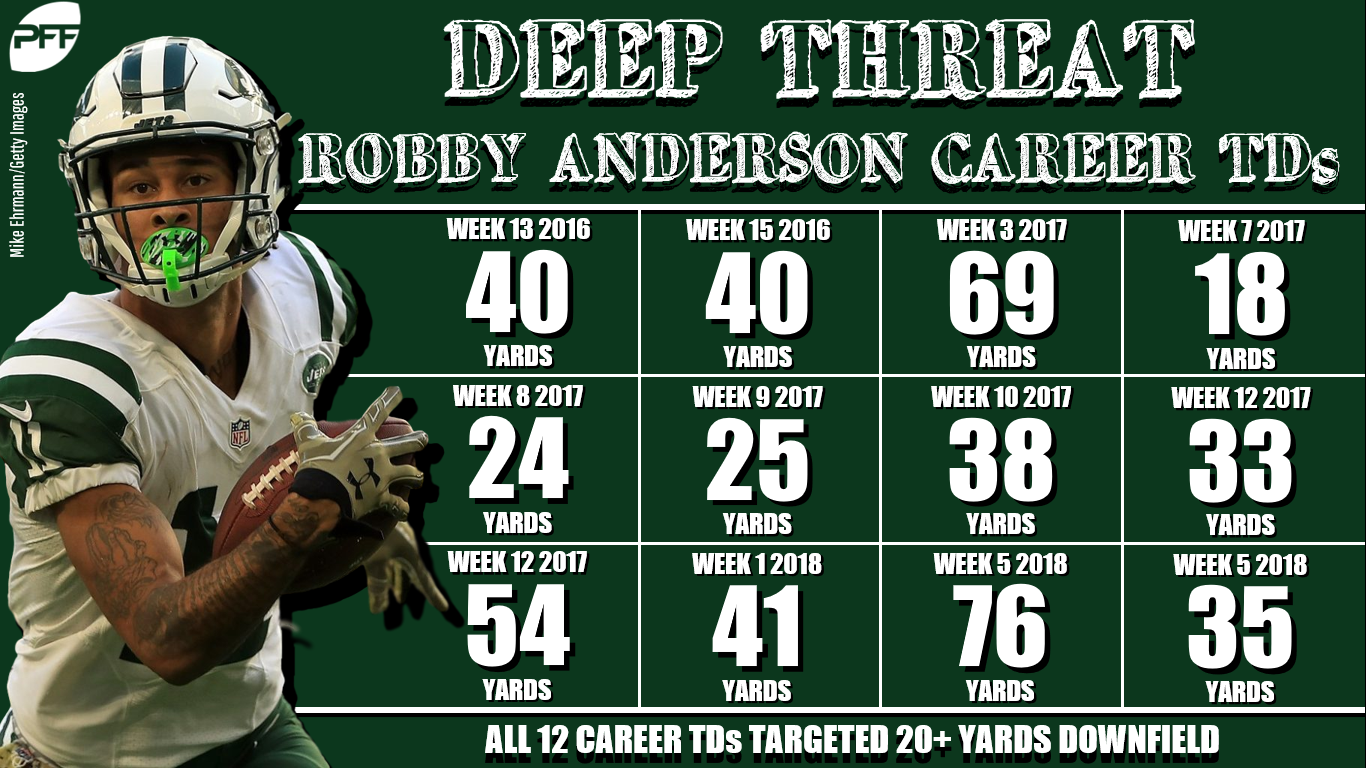 Two wide receivers who weren’t even on the redraft radar a week ago made a splash in Week 5 in the Moore and Valdes-Scantling. Moore has leapfrogged Brandon Marshall on the team’s depth chart and he pulled in two of his four targets for two touchdowns in Sunday’s loss to the Rams. Valdes-Scantling benefited from both game flow and injuries as Green Bay played without Randall Cobb and Geronimo Allison due to injuries. Either of these guys could be considered as stash candidates in deeper formats. … Gordon scored his first TD as a Patriot on a highlight-reel 34-yard catch and appears to be over the hamstring injury that has nagged him. Look for his role to expand in the coming weeks. … Just when owners gave up on Anderson, the deep threat did what he does best – score big. His 111 yards on deep passes were the best in the league on Sunday. He was only targeted three times but caught each pass and finished with 123 yards and two scores. … After a brutal September stretch of games, October is off to a good start for Thomas. The Denver wideout scored and registered 105 yards on five catches while boasting a 20.5 average depth of target versus the Jets. … With Andrew Luck starting to find a rhythm Rogers could continue to be viable, especially in PPR formats. He’s been targeted 22 times over the Colts’ last two games.

As long as Jack Doyle is out, Ebron will continue to have high-end TE1 potential. He has 19 catches over the last three games and already has made five trips to the end zone, matching his previous season-long career high during his time with the Lions with 11 games still to play. … Hooper exploded with nine catches for 77 yards against the Steelers. The trend to watch may not be Hooper though, rather who is playing Pittsburgh. … Next week, Uzomah is the one to draw the Steelers and he has emerged as the TE to own in Cincinnati with Tyler Eifert out for the season.

Just when Mariota was starting to win back the trust of fantasy owners, he offered a great reminder of why he can’t be viewed as a reliable starting fantasy quarterback. He scored just five fantasy points in a favorable matchup versus Buffalo and has only cracked double digits now once in four starts … Tannehill collapsed in the second half in a loss at Cincinnati, turning the ball over three times. The Dolphins’ QB completed just 20 of 39 attempts (31 aimed) for 185 yards, one touchdown and two picks. … Despite attempting 56 passes versus the Browns, Flacco failed to throw a single TD pass in the Ravens’ loss on the road. After throwing for five TD passes in the first two weeks of the season, Flacco has tallied three over his last three contests. … It remains to be seen if Prescott is ever going to return to fantasy relevance. Prescott hasn’t finished inside the top 10 at the position since Week 14 of 2017, a span of eight games. … With Eifert out for the year and both Giovani Bernard and John Ross inactive, Dalton didn’t have his full arsenal of weapons in Week 5 against Miami. It showed in his final numbers as he failed to reach 20 fantasy points for the first time this season.

There were two developments this week that dented Coleman’s value – the return of Devonta Freeman and Ito Smith continuing to be involved. Smith played on 29.6% of the team’s snaps. Coleman is in the flex conversation but has a limited ceiling. … After a promising Week 1 to the season it’s been tough sledding for Lewis over the past four games. Despite getting 15 touches Lewis managed just 47 yards against the Bills. With three or fewer catches in three of his five games, there’s reason for concern. … Collins rushed for 19 yards on his first carry Sunday against the Browns, but managed just 40 yards on 11 carries the rest of the day and once again gave way to Javorius Allen at the goal line. With a tough schedule looming the next few weeks don’t expect a turnaround anytime soon. … Rookie running backs Chubb and Penny are still struggling to offer redraft value. Penny is buried behind the Seahawks’ 1-2 punch of Chris Carson and Mike Davis. Chubb turned three carries into 105 yards and two touchdowns in Week 4, but his three carries in Week 5 resulted in just two yards. Until he gets more carries he won’t render much fantasy value.

Great or terrible, there’s been hardly any middle ground with Cooper in fantasy this season. Week 5 was on the terrible side as he was targeted just one time in Derek Carr’s 33 pass attempts. Sunday marked the 10th time in 18 games since the start of 2017 where Cooper failed to reach double-digit fantasy points. … It appears Baldwin is finally near full health, but it didn’t show in the box score against the Rams. He played 53 snaps but was targeted only once and caught it for a single yard. If possible, let Baldwin play his way back into your fantasy lineup. … After scoring twice in Week 1, Stills has only found the end zone once over his last four games and he’s also only eclipsed five targets once all year. … Enunwa has seen his target total drop in recent weeks and he struggled against the Broncos. Game flow hurt him this week, so there is some optimism that a bounce back could be head but for now he’s trending the wrong direction.

Seals-Jones laid a goose egg up on the board, failing to pull in any of his five targets versus the 49ers. The Cardinal can’t be trusted in lineups outside the deepest of formats. … After looking like a beast for the two previous weeks, McDonald gave owners who played him a different kind of stiff arm in Week 5, tallying just one catch for six yards on two targets. He’s not a TE1 just yet…Soft-tissue injuries continue to haunt Seferian-Jenkins — he’s now on IR with a designation to return — and he can be dropped in most cases after weeks of ineffectiveness.