This article is long, so I’ll spare you a lengthy intro. Here’s everything need to know for fantasy football in order to dominate your Week 10 DFS tournaments and cash games 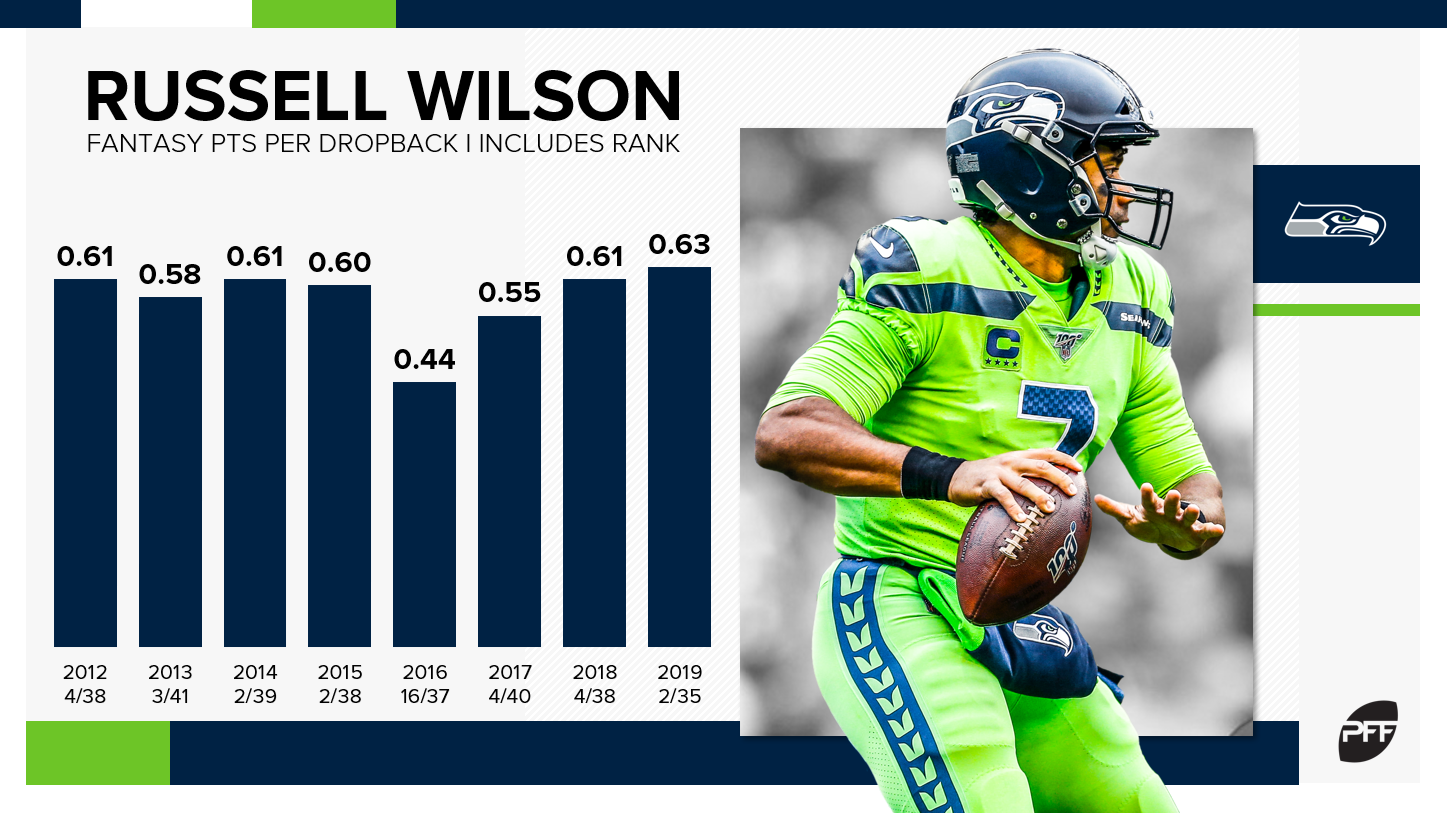 In part because they rank second-best in yards per carry allowed, Philadelphia is one of the league’s top pass-funnel defenses for the third year in a row. This season, 75% of their surrendered yardage has been via the pass, which ranks third-most. Wilson has faced three other teams ranking in the top-seven by this same stat – Tampa Bay (79%, most), New Orleans (75%, fourth-most), and the Rams (74%, fifth-most) – totaling 39.2, 41.3, and 29.9 fantasy points against them. Within just $200 of Matt Ryan on both sites, and at a much lower ownership, Wilson is an ideal tournament play.

Atlanta is just 0.25 points off New Orleans for the highest implied point total of the slate, but unlike New Orleans, we should expect Ryan to comprise nearly all those points for Atlanta. Tampa Bay is the league’s top pass-funnel defense (as we just outlined), Atlanta is down to just their third-string running back, and, the high over/under (most by 3.5) and close spread (-4.5) imply shootout potential. Look for Ryan to continue his run of 300-yard games (eight over his last 10 games) this week, and do a little more damage than that, up against a Buccaneers defense that has given up the second-most passing yards and passing touchdowns to opposing quarterbacks. He’s glaringly mispriced FanDuel, ranking just fourth in salary, and an even better value on DraftKings ($6,700). Over the past two seasons, only Patrick Mahomes averages more DraftKings fantasy points per game (23.8).

Jacksonville’s defense ranks dead-last in rushing yards allowed per carry (5.3), well above the league average rate (4.31). Since Week 5, they’ve allowed 6.21 yards per carry on the ground, while also surrendering 100-yard games to every runner they’ve faced who has exceeded 12 carries against them (Jonathan Williams, Marlon Mack, Carlos Hyde, Christian McCaffrey). Henry, meanwhile, comes off a game against the defense (Chiefs) that ranks second-worst in yards per carry allowed (5.05). On 23 carries, he totaled 188 rushing yards and two touchdowns against them. In a game the Titans are at home and favored, Henry isn’t just a top play on DraftKings, he’s a near-lock-button play.

Despite Kareem Hunt’s return from suspension, Chubb is seeing his best volume of the season – he’s just a little more gamescript-sensitive now. Luckily, that won’t matter too much this week, as Cleveland has ideal gamescript, favored by 10.5 points, and against a Miami defense that is giving up the most rushing yards per game (128.7). Cleveland is also projected to score 27.25 points this week, which is 8.1 points above their per-game average this season, and that’s especially relevant to Chubb, who ranks sixth among all players in expected touchdown percentage (31%).

Montgomery has been one of the league’s most frustrating players to own week-to-week, but he has seen good volume in games with favorable gamescript. Essentially, Montgomery is seeing low-end RB1 volume (16.0 XFP per game) in games Chicago has either won or lost by fewer than three points. In all other games he’s averaging just 7.1 XFP per game (RB5 volume). Look for good volume this week, in a game Chicago is projected to win by 6.0, against a Giants defense that is giving up the eighth-most rushing fantasy points per game to enemy running backs. Like with Chubb, he also has one of the best touchdown expectations on the week (and that’s not being weighted into his salary). Montgomery ranks third among all players in XTD percentage (33.7%), and Chicago is also expected to score 23.25 points, which is 6.4 points more than their per-game average. 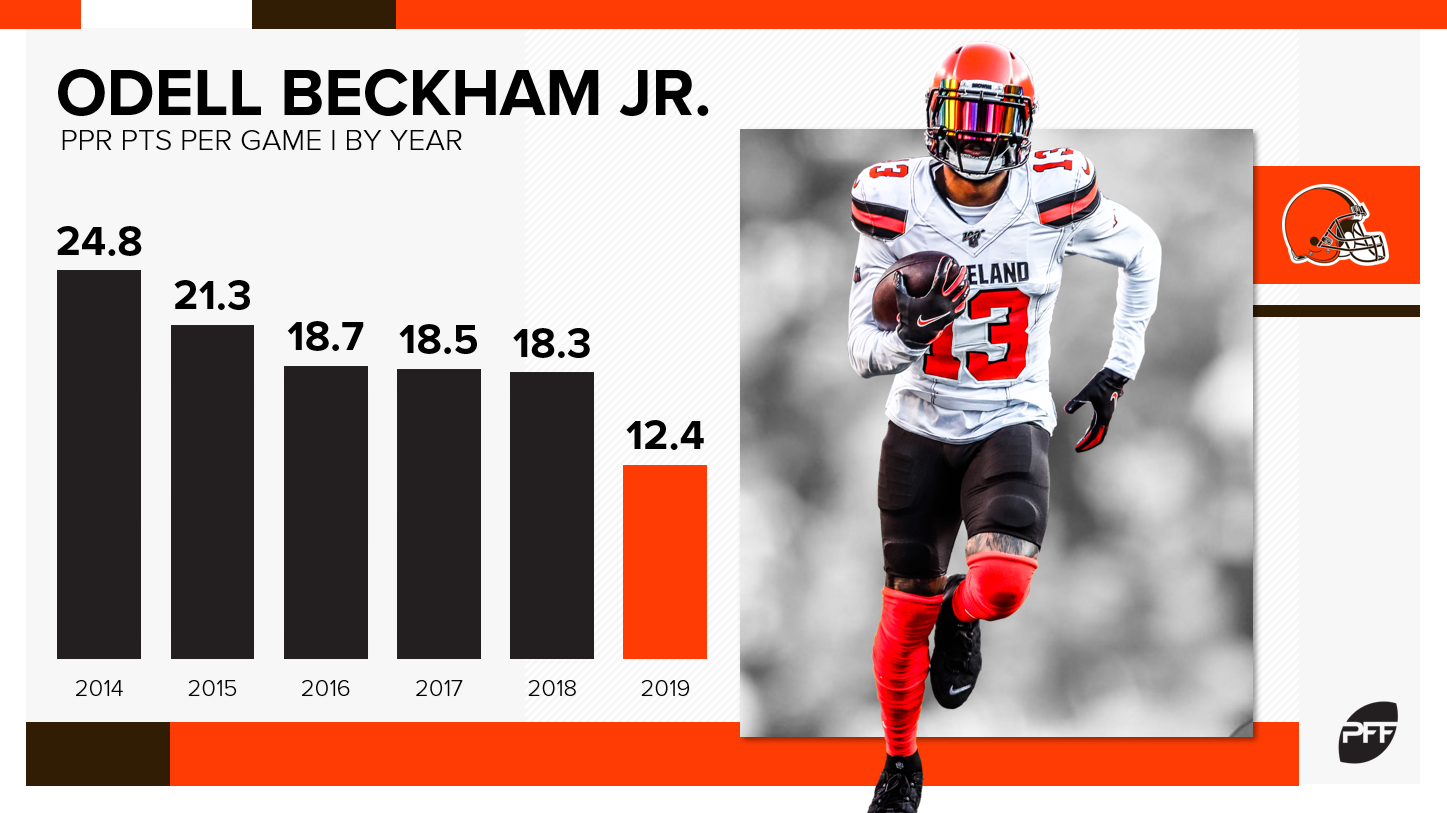 Beckham totals just 124.2 fantasy points in his 10 career games with the Browns. For perspective, that’s 46.6 fantasy points less than his worst 10-game stretch with the Giants. Without question it’s been ugly for him this year, and partly due to a league-worst strength of schedule, but volume has remained strong and Week 12 looks like the perfect get-right matchup. Miami has been getting beaten up by opposing WR1s since their Week 5 bye, surrendering: 26.0 fantasy points to Terry McLaurin, 21.3 to JuJu Smith-Schuster, 22.3 to Jamison Crowder, and 19.3 and 34.7 to John Brown. He’s an ideal tournament option on FanDuel, mispriced by about $700.

Moore leads all players in targets since Week 8, and he’s exceeded 15.0 fantasy points in five of his last six games. Although Moore has failed to find the end zone in any of those games, that’s due more to bad luck than volume or efficiency. In other words, expect a positive regression (more fantasy points) to the mean within the next few weeks. He’s a top-three play on FanDuel, and, on DraftKings somewhere between a good-to-great play and a must-play option depending on whether Marshon Lattimore sits out again.

Chark ranks fifth among all wide receivers in fantasy points per game (18.1), and, since Week 5, ranks sixth in XFP per game (18.0). He’s coming off the best volume-game of his career (15 targets and 220 air yards) to draw a neutral-at-worst matchup against the Titans. So, why is he being priced as just a borderline WR1 on both sites? I have no idea.

Since Week 7, Metcalf has been producing like a mid-range WR2 (15.9 fantasy points per game) on mid-range WR2 volume (14.5 XFP per game). That alone makes him look like a value, but especially so when factoring in the matchup on a depleted week. Philadelphia is giving up the fewest fantasy points per game to opposing slot wide receivers, while also ranking top-10 against running backs and tight ends. However, for the third consecutive season, they’re giving up the most fantasy points per game to opposing outside wide receivers. In other words, look for Russell Wilson to lean heavily on Metcalf, who runs 85% of his routes on the perimeter, with Tyler Lockett drawing the tougher matchup on the week.

It’s an absolutely brutal week in a brutal season for tight ends. Travis Kelce and Hunter Henry are on bye, George Kittle and Mark Andrews are off the main slate, and Austin Hooper and Evan Engram are banged up and unlikely to play. That leaves us with just three tight ends available on this slate who are averaging 10.0 or more fantasy points per game: Darren Waller (14.1), Zach Ertz (12.9), and Greg Olsen (10.1). All are at least a little mispriced, but, if paying up at the position, I’m primarily looking at Ertz. He should continue to receive high-end volume given injuries elsewhere, and the matchup is strong – Seattle ranks sixth-worst in schedule-adjusted fantasy points per game allowed to opposing tight ends.

If punting the position, your best options are Dallas Goedert, Ryan Griffin, and Jacob Hollister. Of these, my preferred option is Griffin. He’s scored 11.0 or more fantasy points in four of his last six games and 24.0 or more in two of his last four. He draws a Raiders defense that ranks third-worst in schedule-adjusted fantasy points per game allowed to tight ends.