Each week in this space, I’ll be highlighting the players I’m building most of my lineups around on that week’s main slate. (Most of these locks are for tournaments, though I’ll do my best to differentiate where needed.) Lock these guys into lineups and go from there. Check out below for Week 12. 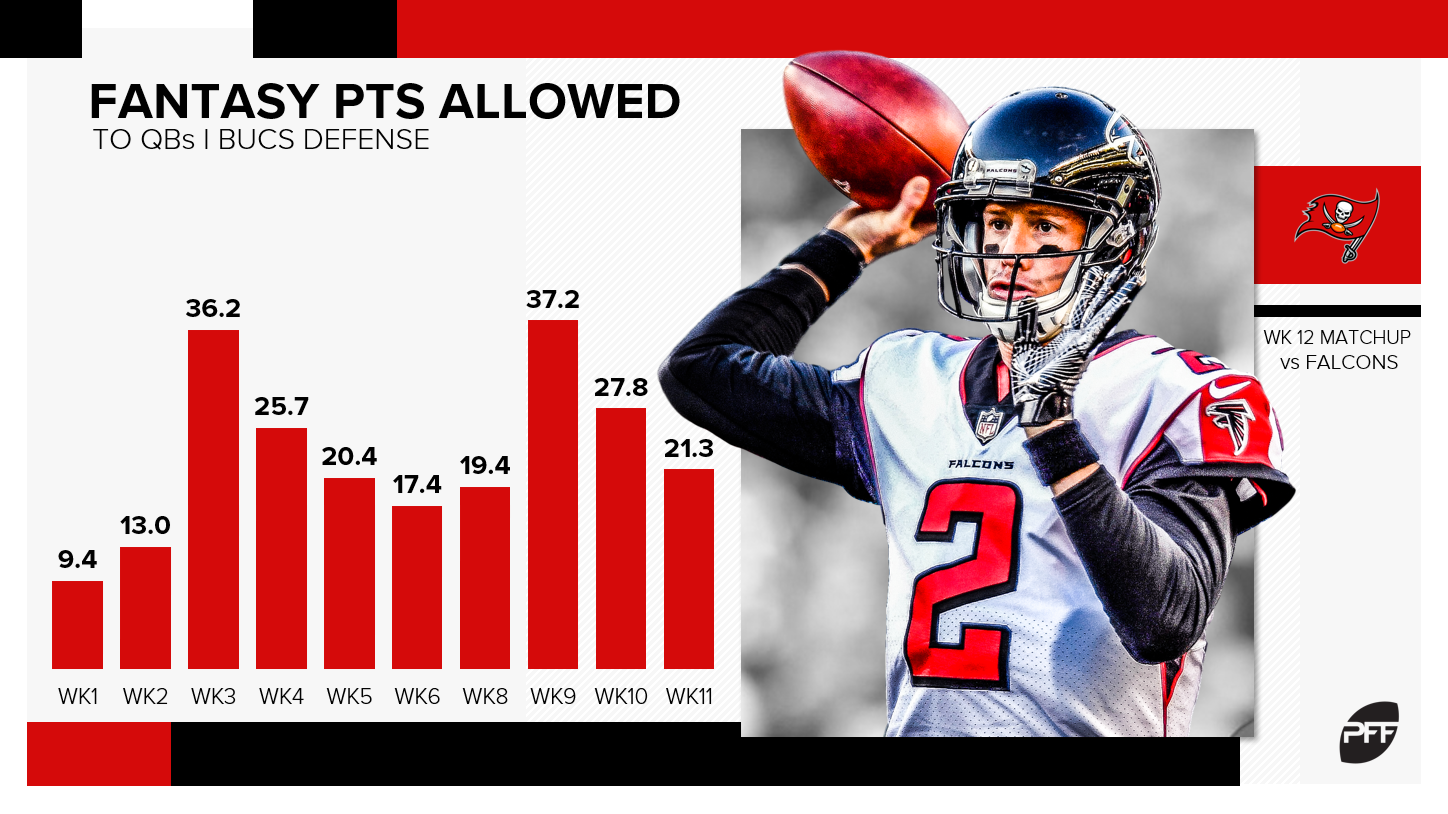 The Buccaneers allowed 22.4 points to quarterbacks across Weeks 1 and 2 combined. It started well. Since? They’ve been worst in the league per game by two full points (25.7 fantasy points per game to quarterbacks; the Lions are second at 23.7). They’ve allowed two of the five best single fantasy games to opposing quarterbacks (Russell Wilson in Week 9 and Daniel Jones in Week 3) — the Dolphins are the only other team allowing two of the 10 such performances. They’re one of only two teams (the Giants being the other) allowing more than 300 passing yards per game on the road. Meanwhile, Ryan has topped 300 yards seven times in nine games, setting himself up nicely for DFS bonuses.

I noted in the Week 12 sleepers and busts that Carr has had a better passer rating under pressure this year than when kept clean, the only quarterback with more than 100 dropbacks who can say that. Now, the truth is that that’s at least as much noise as it is signal — no quarterback is actually better when pressured. So that’s more about direction than actual result. That all said, it might not matter much against the Jets. Among the four cornerbacks who have played more than 200 defensive snaps for the Jets, just one (Brian Poole) has allowed a passer rating in coverage under 100.0 or produced a PFF coverage grade higher than 53.0, and he works out of the slot. So Carr can focus on the outside and he should be fine.

Mayfield is on the rise. He’s facing the Dolphins. He has something to prove. He has obvious stacking options. And, helpfully, he’s only the 10th-priciest quarterback on a 22-quarterback main slate (on both DFS sites). We don’t need much more justification on this one.

Back-to-back, there are two locks here from the same team who don’t pose great stackability, since Chubb’s receiving work has all but disappeared since Kareem Hunt debuted. So “lock” is somewhat fungible. But you’ll want a heaping helping of some part of the Browns offense, whether it is the passing game or the rushing game.

Over the Jaguars’ last six games, they have allowed nine different running backs reach double-digit fantasy points, including multiple backs in Week 5 (Christian McCaffrey and Reggie Bonnafon), Week 6 (Alvin Kamara and Latavius Murray), Week 9 (Duke Johnson and Carlos Hyde), and Week 11 (Marlon Mack, Jonathan Williams, and Nyheim Hines). In Tennessee, Henry is really the only game in town. And remember, it was against the Jaguars that Henry had his first monster game a year ago.

You’ll notice on our points allowed matchup chart that the Bengals have allowed the fourth-most PPR points per game to opposing running backs. You’ll notice on the injury report that the Steelers are likely to be without James Conner, JuJu Smith-Schuster, and Diontae Johnson this week. You’ll notice on Samuels’ game log that he had more than 23 points the last time the Steelers faced these Bengals. And you’ll notice with your eyes that Mason Rudolph certainly hasn’t played like a quarterback a team will want to lean heavily on in a game. 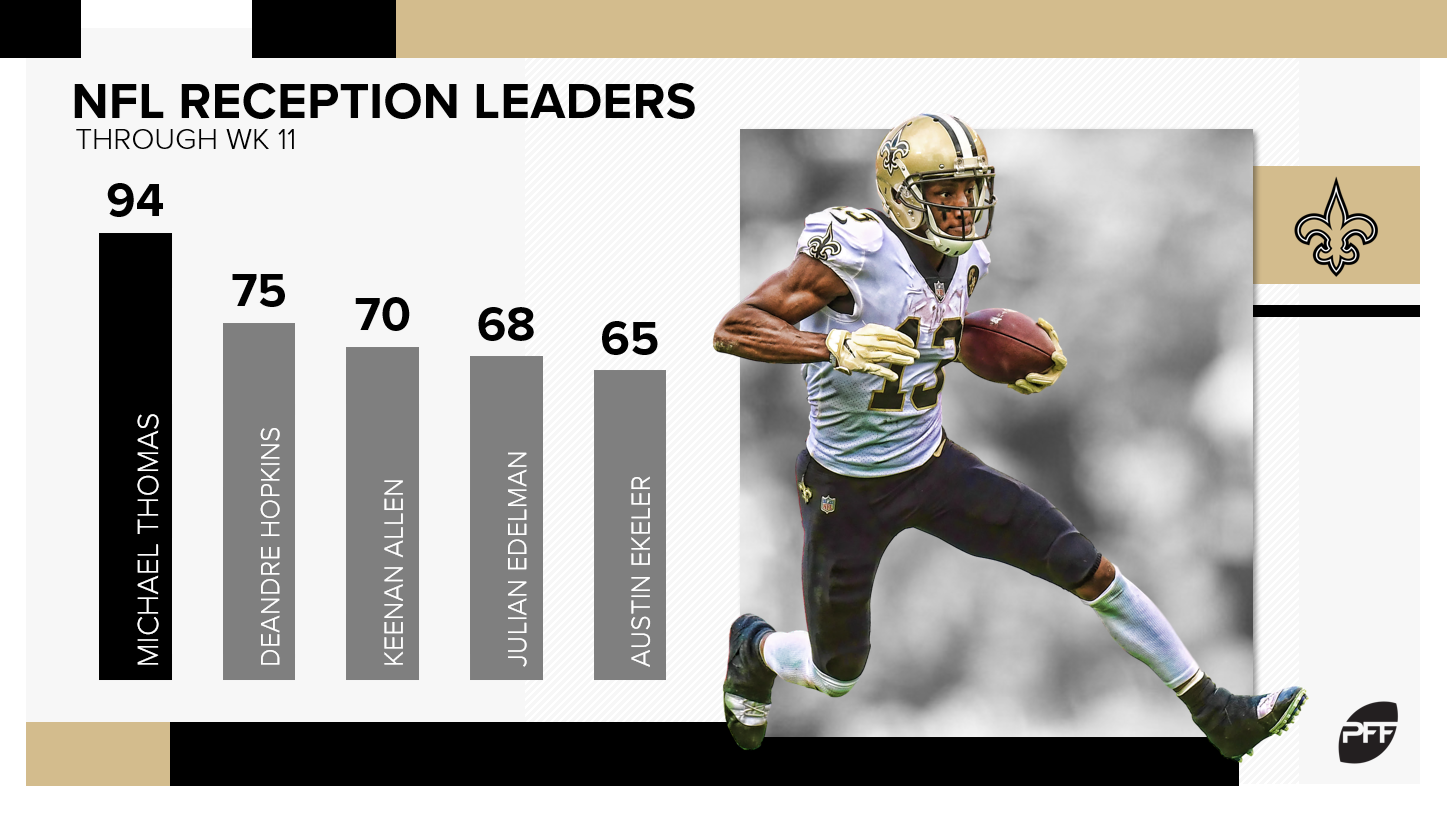 Thomas has the NFL receptions league by a ridiculous 19. Among players on this week’s main DFS slate, his lead is even bigger, a whopping 26 reception lead over Julian Edelman and 31 over Chris Godwin. On average, that’s basically saying he starts every game with a 2-point head start. And yes, his pricing reflects that head start, and yes, he is likely to see shadow coverage from James Bradberry, who has succeeded in that role this year, but who cares? He’s worth it.

Everything said above about Ryan vs. the Buccaneers pass defense applies to Jones and Ridley, obviously. Add to that Jones’ documented history of destroying Tampa Bay (he’s only failed to reach double-digit PPR points against them twice), Ridley’s extreme upside (28.3 points in his last game), and the Falcons’ depleted stable of non-these guys options (Mohamed Sanu gone, Austin Hooper hurt), and these are some super plays in Week 12.

Metcalf has put up 15.9 PPR points per game over the last month, including games of 25.0 and 16.3 points in that time. Now, against an Eagles secondary that is allowing the most fantasy points per game to outside wide receivers (for the third straight year) and in a matchup against Ronald Darby that our WR/CB matchup chart definitely likes the look of, we can keep riding the Metcalf train.

Keep an eye on reports out of Tampa Bay entering this game; if O.J. Howard gets his role in the offense back after last week’s benching, this lock goes out the window. But absent that, we just saw Brate draw a massive 13 targets replacing Howard. His history with Jameis Winston is long (he’s scored 6-plus touchdowns each of the last three years). Meanwhile, the Falcons have allowed the No. 1 tight end facing them to reach double-digit fantasy points in five of their last six games.