The opening round of the 2021-22 NFL playoffs was a harsh reminder for most of the teams eliminated that there is still a lot of work to do to become legitimate Super Bowl contenders. That work starts now with the Senior Bowl and East-West Shrine Bowl coming up in just a few weeks.

These are the areas that each eliminated team during wild-card weekend should prioritize leading up to the 2022 NFL Draft.

Few players will be discussed more this offseason than Jalen Hurts, given how his season ended and the Eagles’ three first-round picks in the 2022 NFL Draft.

If a quarterback who Philadelphia loves is available in that cluster of first-round selections, then sure, bring him in to compete with Hurts. But Hurts showed enough over the course of the season that the Eagles don't have to force a quarterback selection in a weak draft class, particularly with a roster that has plenty of other needs. The defense alone is filled with holes across the depth chart.

The only defenses with fewer forced incompletions than the Eagles this season were the Arizona Cardinals, Jacksonville Jaguars and Carolina Panthers.

Part of that is schematic for a unit that often sat back in soft zones. No defense played fewer snaps with at least one cornerback in a press coverage look in 2021 than the Eagles (432). A big contributor, though, is that Philadelphia just lacked impact players on the back end of its defense beyond PFF All-Pro selection Darius Slay.

Starting cornerback Steven Nelson is entering free agency along with safeties Rodney McLeod and Anthony Harris. Slay is 31 years old, and Philadelphia has been looking to upgrade at linebacker for years.

The need for youth and playmakers on defense extends to the defensive line. Fletcher Cox and Brandon Graham have been the core of that unit for a decade, but both are on the downslope of their careers.

The Eagles aren’t going to be a perennial top-10 team with Hurts unless he shows major growth as a passer, but there are plenty of other areas outside of quarterback where Philadelphia needs to get younger and add talent.

Lloyd and Dean are both going to get linked to Philadelphia during draft season, and either would be a needed presence in the middle of the Eagles' defense that was missing in 2021. Both recorded 90.0-plus PFF grades in their final college seasons.

The big, glaring storyline surrounding the Steelers this offseason will be how they transition into life without Ben Roethlisberger.

Fox Sports’ Jay Glazer said earlier this season on the Pat McAfee Show that the Steelers don’t want to start from scratch with a rookie quarterback next season.

NFL Network’s Ian Rapoport gave an opposing report on the situation last weekend, saying both Mason Rudolph and Dwayne Haskins are expected to compete for a starting job in 2022, along with a quarterback likely added in the 2022 NFL Draft.

Whether Pittsburgh decides to go big at the position or simply insert Rudolph or Haskins into the starting lineup, improving the offensive line should be the team's biggest priority this offseason.

Big Ben was pressured on a league-low 22% of his dropbacks across the 2020 and 2021 seasons, but a lot of that had to do with a league-low average time to throw of 2.2 seconds. That pressure rate in no way crowns the Steelers offensive line as the top pass-protection unit in the NFL.

No offensive line lost more pass-rush snaps without giving up a pressure in 2021 than Pittsburgh’s.

The unit was often bailed out by quick releases from Roethlisberger. Any scheme that involved a higher rate of long-developing route concepts would have put more of a spotlight on the true state of Pittsburgh’s offensive line.

The run blocking was even worse than the pass protection. The Steelers were one of four offenses to average fewer than 1.0 rushing yards before contact per attempt, joining the Bengals, the Houston Texans and the banged-up New Orleans Saints.

It’s not as if Pittsburgh hasn’t invested in the offensive line at all in recent years. The team's opening day starters at left tackle (Dan Moore Jr.), left guard (Kevin Dotson) and center (Kendrick Green) were all drafted in the past two years. All three of those players were taken in the third round or later, though. And we saw this season that the Steelers aren’t going to get full value out of 2021 first-round pick Najee Harris until the offensive line is in a better place.

It’s too early to write off the three players above, but the right side of the Steelers' offensive line — Trai Turner and Chukwuma Okorafor — will enter free agency this offseason. Even if Pittsburgh likes the young guys on the roster when projecting forward, there’s not enough there to avoid targeting offensive linemen on Day 1 and Day 2 of the 2022 NFL Draft after opting to add at the skill positions early last season.

Linderbaum will headline the conversation for a team with an impressive track record at the center position, but he’s also the least likely of the players listed above to make it to the 20th overall pick.

There isn’t any position Pittsburgh can’t look to improve, which makes Green — who has started at every offensive line position except center — an interesting target.

New England Patriots: No. 1 option in the passing game

As the season progressed, it became clear that New England’s offense had a ceiling. Rookie quarterback Mac Jones saw his PFF grade drop from 86.9 across the first 11 weeks of the 2021 season to 63.8 from Week 12 through the wild-card loss to the Buffalo Bills. That decline doesn’t fall solely on Jones, though.

We’re just two years removed from a New England supporting cast that made Tom Brady look mortal at the end of his Patriots tenure in 2019. While they went out and spent money to improve at wide receiver and tight end this offseason, the Patriots still lack a dynamic, primary option in the passing game.

Jakobi Meyers, Kendrick Bourne and Hunter Henry are nice pieces, but you’re in trouble as an offense if you’re relying on any of them to consistently make plays against man coverage as No. 1 options. New England’s results against man and zone coverage this season bear that out. 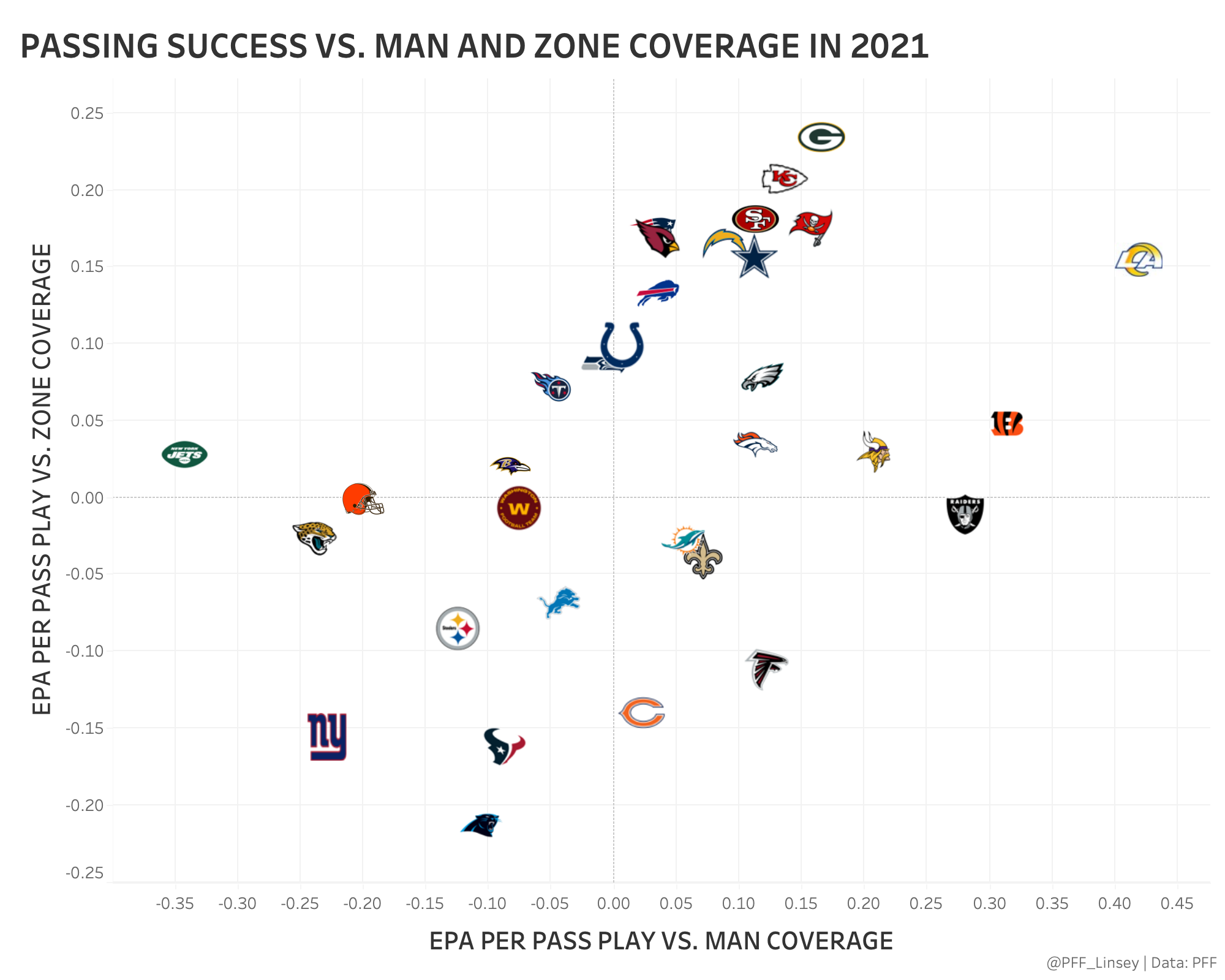 The Patriots ranked 18th in expected points added (EPA) per play against man coverage compared to fourth against zone looks. New England isn’t going to maximize the value it's getting from Jones on his rookie contract if it doesn't have someone who he can rely on to produce big plays against man coverage.

London would be the ideal fit for New England’s offense as a six-foot-five ball-winner who thrives in contested situations in addition to being one of the best after-the-catch threats in the class.

The Raiders were one of the biggest overachievers in the NFL in 2021, given the current state of their roster and how many legitimate building blocks they have moving forward. If Las Vegas is going to continue to invest in and build around Derek Carr, he needs more help. That’s true at receiver, but even more so along the offensive line.

After an offseason in which Las Vegas traded three offensive line starters, the only Raiders offensive lineman to grade out in the top half of their position during the 2021 regular season was left tackle Kolton Miller.

Las Vegas needs improvement from that right side of the offensive line, if nothing else. The Raiders’ right guard and right tackle positions combined to allow 124 pressures over the course of the regular season. That was 17 more than any other team in the NFL.

Leatherwood, Las Vegas’ first-round selection in the 2021 NFL Draft, was responsible for a league-high 65 of those pressures. He had positive moments in the run game and should improve after a rookie season that involved a mid-year position change from right tackle to right guard, but four of the five starting spots could at least use some new competition entering 2022.

Raimann is a player who PFF is currently higher on than the consensus. He’s 19th on the PFF Big Board but has an expected draft position in the 40s, according to Grinding the Mocks. A former tight end at Central Michigan with a unique background, Raimann could be a potential value selection on Day 2.

Arizona Cardinals: Cornerbacks who can hold up in man coverage

Cornerback was perhaps Arizona’s biggest weakness entering the 2021 season, and that was before Malcolm Butler decided to retire. Cardinals cornerbacks finished the year ranked 22nd in coverage grade as a unit despite outperforming expectations.

Defensive coordinator Vance Joseph utilized man coverage at one of the highest rates across his first two seasons (2019-20), but he altered his approach this year due to Arizona’s limitations at cornerback.

Joseph wants to operate an attacking defense that blitzes at one of the highest rates in the NFL and plays a lot of man coverage behind those blitzes. It’s difficult to do that when you don’t have the needed players in the secondary, though.

Robert Alford was the Cardinals’ highest-graded cornerback in coverage last season, and he is a 33-year-old entering free agency. Arizona could stand to add several cornerbacks in the draft to fill his role and compete with younger players such as Byron Murphy Jr. and Marco Wilson for snaps.

The top cornerback prospect in the class, Derek Stingley Jr., will be long gone by the time Arizona selects in the first round. There are still plenty of intriguing prospects at the position who project well in a man-heavy defense.

McCreary is one of them following a 2021 season at Auburn in which he allowed a catch on just 45% of the targets into his coverage and surrendered a 57.8 passer rating.

Dallas Cowboys: All three levels of the defense

Dallas will have to use the 2022 NFL Draft as its primary avenue for improving the roster this offseason, as the team has the third-least effective cap space — ahead of only the New Orleans Saints and Green Bay Packers — in 2022, according to Over the Cap.

The offensive line is the current punching bag for Dallas following a poor performance in a wild-card loss to the San Francisco 49ers. But that unit’s demise is likely being overblown.

Zack Martin and Tyron Smith are two of the best at their respective positions when healthy, though it’s getting harder and harder to rely on Smith staying on the field. La’el Collins can also be penciled in as an above-average starter, earning an 82.0 overall PFF grade in his return from injury this season. Left guard and center are potential areas for improvement, but the group is not in as bad a spot as many are making it out to be.

The defense, meanwhile, received plenty of praise in a season where it forced the most offensive turnovers in the NFL (34). In many ways, those turnovers masked some deficiencies, though. The Cowboys could use reinforcements at all three levels heading into 2022.

One area that needs to improve, regardless of which of those free agents re-signs this offseason, is their run defense. The Cowboys rank 29th in expected points allowed (EPA) per run play over the past two seasons, and their 2.0 rushing yards allowed before contact is nearly half a yard higher than any other defense.

A large portion of the blame for those results falls on an interior defensive line that is getting blown off the ball. 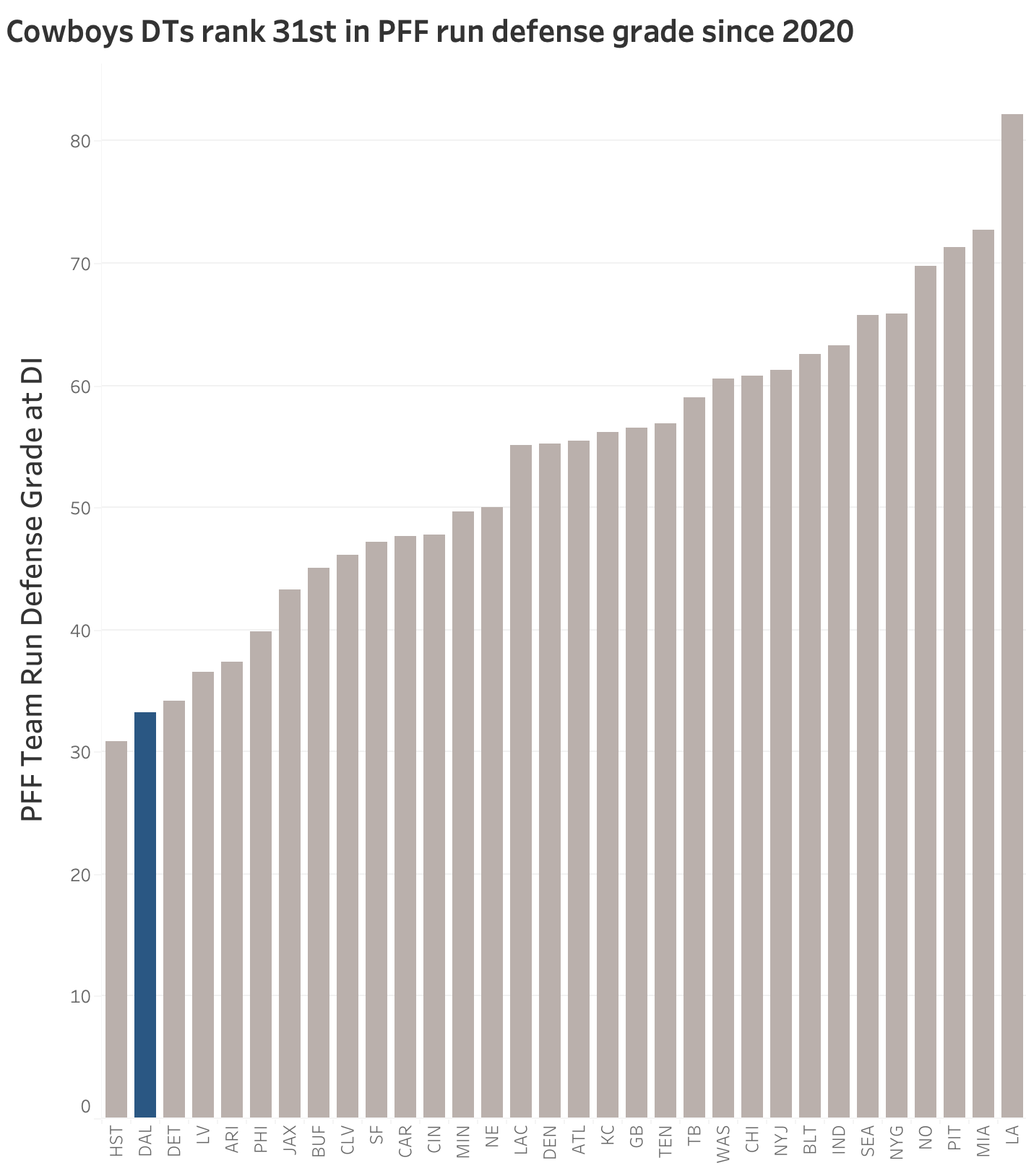 The defensive tackle struggles haven’t been for a lack of trying. Dallas has added an interior defensive lineman in the first two days of each of the past three drafts — Trysten Hill in 2019, Neville Gallimore in 2020 and Osa Odighizuwa in 2021. The Cowboys could go back to the well in 2022.

Davis and Jones are two of the biggest physical presences in this draft class, and it’s difficult to imagine that plugging them into the middle of Dallas’ defensive line wouldn’t help the run defense. The Cowboys would likely have to target Davis in the first round, but Jones could be an option on Day 2.